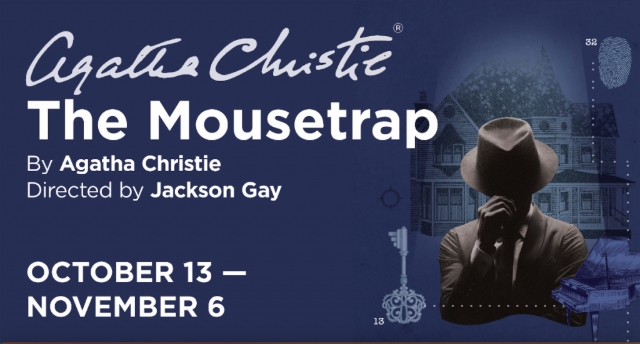 When the murderer reveals himself and points the gun at his next victim, I expect to feel some fear. Unfortunately, in the stylish but misguided Hartford Stage production of The Mousetrap (running through Sunday, Nov. 6), not only didn’t I feel fear, I had no sense that the intended victim felt fear.

The fault must lie with the approach of director Jackson Gay. After all, the play is written by Agatha Christie who certainly knows her way around murder mysteries. Some criticize Christie for her often-convoluted plots and her habit of hiding information until the revelation of the killer. But for those of us who have been addicted to the PBS Miss Marple mysteries and the Hercule Poirot mysteries, we know she can chill the spine.

That this production – despite a terrific set by Riw Rakkulchon and costumes by Fabian Fidel Aguilar – has nary a chilled spine, makes it difficult to totally get into the mystery.

Remember this is the longest-running show in London, far exceeding the Broadway production of Phantom of the Opera.

The main problem is that the show is played for laughs. It is as if Gay did not think the audience would accept this as a true mystery, so played it as a cross between a satire and a farce. Everything is exaggerated.

It is a typical Christie-style mystery – a woman has been murdered, and a clue is left that she is the first of three victims. We soon realize that the people gathered on a snowy evening in a remote and newly opened guest house may include the other two victims. It is the normal mixed bag of people – the youngish couple who have opened the guest house, an pretentious and demanding lady, a retired Army colonel, a strange-looking and acting young man, a rather severe-looking young woman, and the unexpected guest whose manner is most odd. And then the police sergeant arrives to tell them they are in danger.

Are they what they seem? Who has a connection to the murdered woman? Will the real killer be found?

The answers – they aren’t all that they seem, several have connections to the murdered woman, and the killer is unmasked before striking for the third time. (One guest is murdered.)

One reason the show generated so much laughter on opening night is that no one in the cast was actually trying to create real people – their portrayals were all superficial and mannerisms with rather spotty English accents.

One example, the strange-looking young man who says he is Christopher Wren (named after the famous architect) looks and sounds like a cross between Elton John and Mad magazine’s Alfred E. Neuman. The others are just as exaggerated.

Aguilar’s costumes play into the laughter – many directly tie to the game of Clue. The pretentious woman is all in peacock, the guest house owner is in scarlet, and the colonel – well you guessed it – is in mustard yellow. The other costumes aren’t quite as obvious but also relate to the board game. When a character says they are “going to the library,” the audience erupted. (Did Christie get inspiration from the game which was created in England and introduced there in 1949; the play opened in 1952)?

The set is an old English manor house, replete with all types of weapons on the walls and heads of deer and other game animals over the fireplace. Comfortable sofas make it an ideal place to spend a snowy afternoon. More than one audience member said they would like to stay there. The lighting by Krista Smith and sound by Broken Chord did not add enough to the production.

If you buy into Gay’s directorial approach of not taking it seriously then the cast performs admirably. Both Christopher Geary as Wren and Jason O’Connell as the mysterious Mr. Parvicini are caricatures of an arty and fey young man, and mysterious foreigner.

Some of the roles aren’t as showy – Greg Stuhr is restrained as Major Metcalf, and Ali Skamangas shows some inner self as Miss Casewell.

At the end of the show, the cast asks the audience to adhere to the longstanding request not to reveal the killer. Quite frankly, I didn’t care.