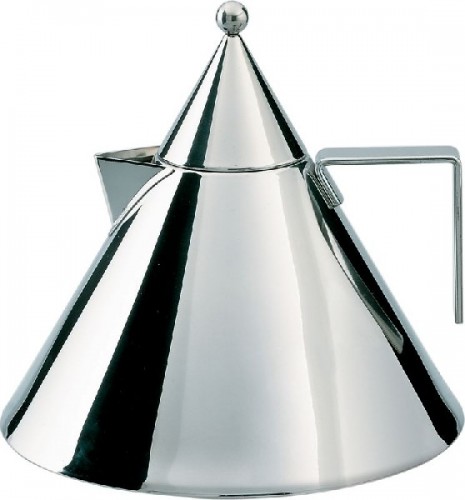 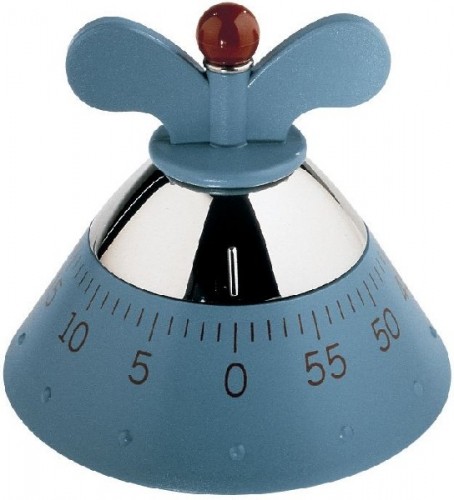 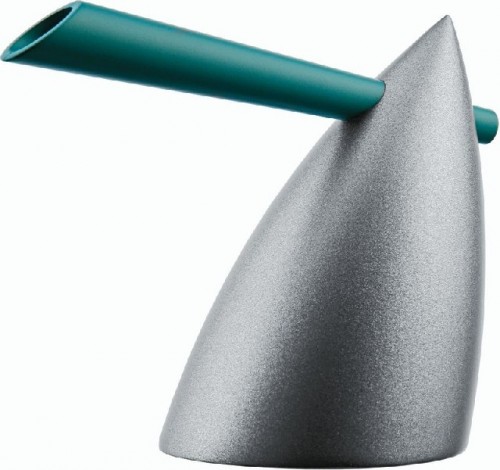 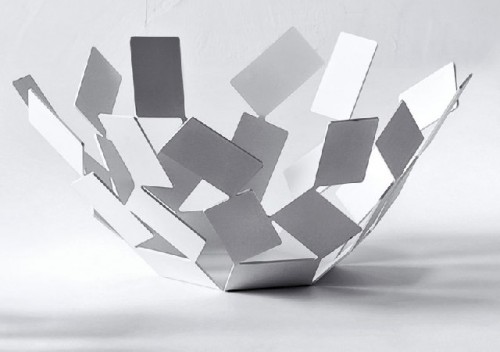 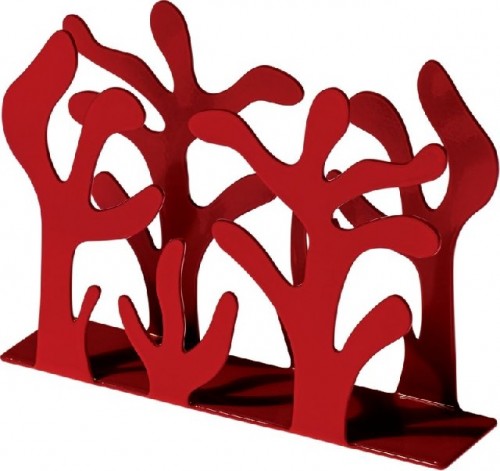 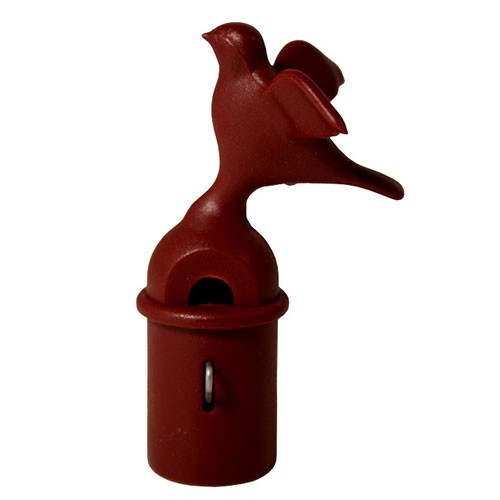 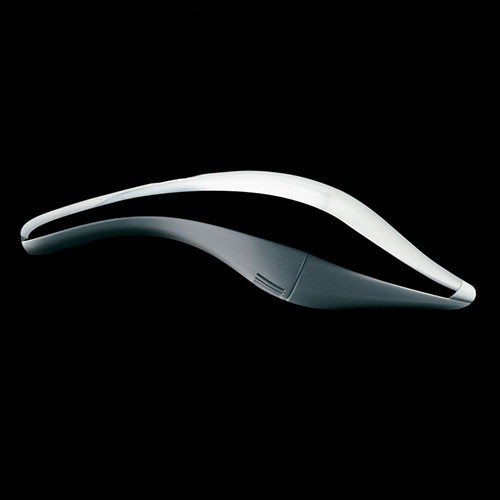 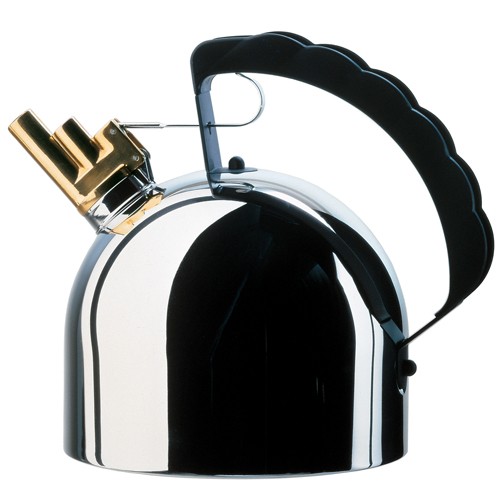 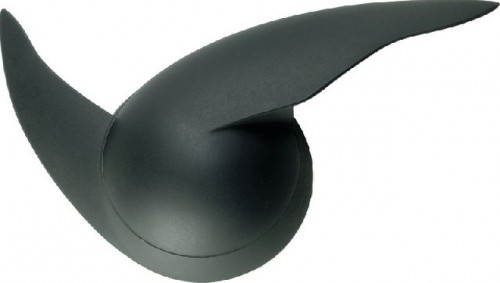 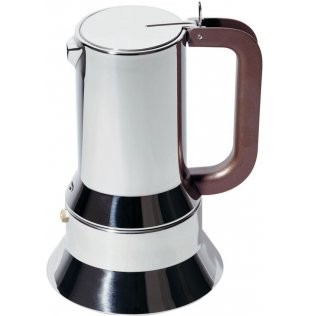 One-cup espresso coffee maker by Richard Sapper (1979), Alessiâ€™s first object for the kitchen after the 1930s. 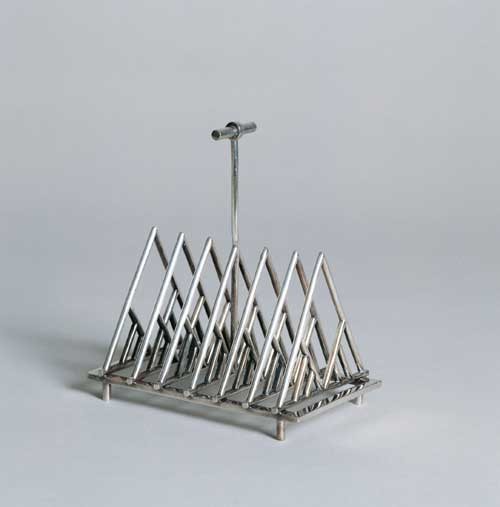 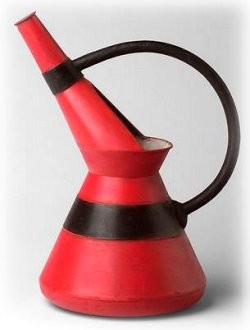 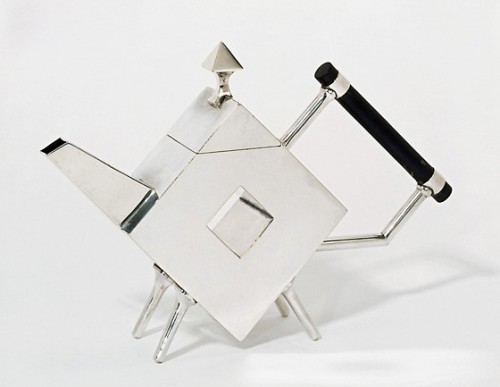 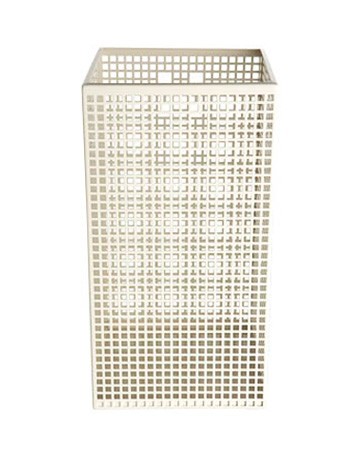 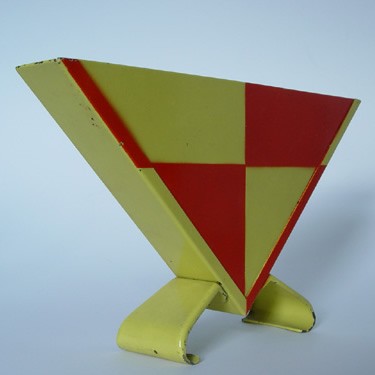 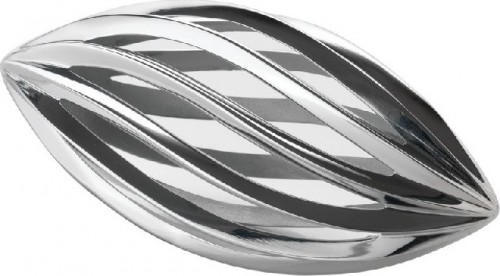 The magic of industrial design occurs when form not only follows function, but when form is inspired and even elevated by function. There is a visceral joy in the beautiful imaginative practical object. Consistently, Alessi tries to add creative inspiration to household objects. For the last 30 years, the Italian home products manufacturer Alessi has been at the forefront of design, continually producing instant icons like Michael Graves’s bird-whistle teakettle, Philippe Starck’s infamous Juicy Salif juicer and Richard Sapper’s elegant espresso pot. All of these are fixtures on many a yuppie’s kitchen counter. The Philadelphia Museum of Art is celebrating the 90-year-old company with an extensive exhibition,"Alessi: Ethical and Radical." The exhibition opens on Nov.21.

The founder's grandson is the creative mastermind of the company. The 64-year-old Alberto Alessi has run the company since the 1970s. ‘‘He’s absolutely unique in the amount of time and money that he has spent on design,’’ said Kathryn Hiesinger, the exhibition’s curator. Included in the show are planned reissues of designs from the 1920s, ’30s and ’40s, a time that Alberto Alessi has described as ‘‘predesign.’’ This is a period before the rise of ‘‘designer products." It is a bit ironic since Alberto Alessi literally invented the category. But, as Ms. Heisinger explains, ‘‘Alberto is now in his minimalist, simplicity mode; he’s against overdesign.’’ Predesign and overdesign are wonderful terms.

Alessi, a world-renowned manufacturer of designer household objects is especially admired for its long history of collaboration with leading, generally star and often cutting-edge, architects and designers, marrying utilitarian form with artistic innovation and bringing creativity into middle class homes. One of the most important international factories of design (along with Artemide for lighting and Vitra for furniture to name a couple of more), Alessi is based in Crusinallo, Italy on Lake Orta.

The family-owned and operated company was founded in 1921 by Giovanni Alessi in the foothills of the Italian Alps, an area known for highly developed craft traditions in wood and metal. In the 1950s, under the leadership of Giovanni’s son, Carlo Alessi, the company began to commission products from outside designers. It was through this strategy that Carlo’s eldest son, Alberto Alessi, brought the company to the forefront of international design.

According to Alberto Alessi, the mission of Alessi is "transforming the gadget function ascribed to objects by the consumer's society into a transitional opportunity, namely into an opportunity for consumers to improve their perception of the world.Ã¢Â€Â¨..

In the future most of our products will continue to be marked by a high degree of innovation and experimentation, as we believe this is the way to develop our ability to set trends, to promote our fame and to create a culture medium aimed at developing those projects we like to call super & popular." These are very thoughtful notions of design, society and commercial self-promotion or marketing.

The exhibition, Alessi: Ethical and Radical (November 21, 2010 through April 10, 2011) surveys a series of milestone Alessi collaborations from 1955 to the present. With a focus on Alessi’s projects with Ron Arad, the Campana Brothers, Achille Castiglioni, Michael Graves, Greg Lynn, Alessandro Mendini, Ettore Sottsass, Philippe Starck, Robert Venturi and others, the exhibition will include some 150 objects, drawings, historic factory photographs, and videos that document the achievements of the family-owned company’s projects.

Organized into two distinct sections by the curators: the first section is about family and factory history and a survey of past, present and future Alessi objects by collaborating designers, including the radical experimental projects Tea and Coffee Piazza of 1983 and Tea and Coffee Towers of 2003. Included among the earliest works in the exhibition, Carlo Alessi’s Bombé Tea and Coffee Service (1945) represents Alessi’s transition from hand-crafted works to industrial products. The company’s first collaboration with an outside design team is also represented in this section: Luigi Massoni and Carlo Mazzeri’s 1957 cocktail set. The sleek elegance of this work ushered in a new era of designer products, introduced by Alberto Alessi’s father, Carlo, and his uncle, Ettore.

Alberto Alessi’s contribution to the firm’s approach to collaboration with designers makes up the balance of the exhibition, with objects dating from the late 1970s to 2010 that demonstrate the unprecedented creative freedom and technical support he has provided. Works by Richard Sapper, whose 9091 teakettle with its two-tone singing whistle (1983) was the first to become a household icon, will be on view next to contemporary classics such as Philippe Starck’s Juicy Salif citrus squeezer (1990).

A number of objects have whimsical qualities, such as Riccardo Dalisi’s stainless-steel Neapolitan coffee maker (1987), paired with his anthropomorphic Figural Prototype with Chair, Pierangelo Caramia’s Penguin teapot (1993) and Stefano Giovannoni’s Mary Biscuit box (1995). Other works reflect the architectural styles of their designers, among them Mario Botta’s precisely angled Mia and Tua pitchers (2000), and Zaha Hadid’s Niche centerpiece (2009). These are composed of several elements that can be assembled into multiple configurations.

A final element of the exhibition includes selected works from the firm’s two most famous experimental projects: the Tea and Coffee Piazza of 1983 and the Tea and Coffee Towers of 2003> Each of these projects followed by traveling museum shows were curated and coordinated by Alessandro Mendini and produced by Alessi. In 1983, Alessi identified 11 architects and gave them free rein to explore new forms and technologies. The now well-known results include services by Michael Graves, Hans Hollein, Charles Jencks, Richard Meier, Alessandro Mendini, and Aldo Rossi. These objects and sets were extremely expensive objects that were out of the reach of mass consumers. The show led to more moderately priced pieces created for Alessi by many of the exhibits' star participants.

Twenty years later, Alessi repeated the experiment with 22 architects for the Tea and Coffee Towers project, which produced Greg Lynn’s titanium flower-like ensemble. Jan Kaplicky and Amanda Levet of Future Systems designed a set made of heat-resistant clear glass, while Will Alsop’s vessels were designed to fit inside a rigid polychrome stereometric container. Displayed in close proximity to each other, the Tea and Coffee Piazza project and the Tea and Coffee Towers project demonstrate the exceptional changes that occurred in style and technology during the two decades that separated these projects.

Following this legacy, Alberto Alessi is presently moving his company into the future, working with such designers as the Campana Brothers, Rowan & Erwan Bouroullec, and Pauline Deltour. Some of the factory’s early designs by Carlo Alessi are now being reissued using modern production methods. This is being done with the notion that their design and function still satisfy contemporary aesthetics and needs.

Precedents for master designers to create can be dated back to at least the 1870s with the work of pioneering British industrial designer Christopher Dresser. His metalwork has great contemporary resonance and speaks to spare, elegant designs by others following several decades later. Another pioneer is Josef Hoffmann, a founding member of the Austrian Wiener Werkstaette. Hoffmann's early 20th Century work in architecture, interiors, glass, textiles and metal was geometrically simple but highly evolved aesthetically. Marianne Brandt was one of the few women to head a Bauhaus workshop, the Metal Workshop. Her late 1920s and early 1930s pieces were elegant, minimalist and quite beautiful. These three designers worked with and cherished industrial methods to fabricate their works. If Alessi was around during their prominence, each of these great designers would have been an Alessi design collaborator.

One of the favorite Alessi collaborators is the whimsical French design master Phillipe Starck. This year is the 20-year anniversary of Starck’s original iconic citrus-squeezer, the still visually compelling Juicy Salif. Highly controversial and yet celebrated, this was kitchen object as space alien sculpture. To celebrate the product's birthday, a competition was held to find and support new, fresh talent. Philippe Starck was the event's judge.

The mysqueeze, designed by Roland Kreiter, won the competition. It is a practical yet beautiful citrus squeezer as well. Kreiter’s original prize of £1,000 (about $1600) was eclipsed when Starck, on seeing his design, not only hired Roland as an intern but called up his friend Alberto Alessi and told him he’d found the perfect new design for his next collection. The mysqueeze product is now available for purchase online and next year will be in stores selling Alessi products.Thus, the Alessi collaborative tradition continues.

Alessi's approach adds intrinsic value to each manufactured product. This is object of value created by designer branding with Alessi's imprimatur. The double branding makes the object more important than just single branding. There is often a very personal sculptural aspect to each functional piece. This translates into a signature quality by the designer that can be eccentric, quirky or sublime. Lately, there has been an emphasis upon sustainable fabrication materials and methods as well. There will always be a visceral joy in the beautiful imaginative functional object. Alessi has understood this for decades. Sometimes it is magical.