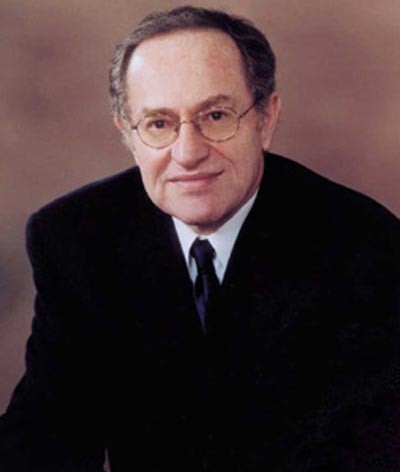 Alan Dershowitz will speak at Huntington Theater in support of a new play Captors.

In conjunction with the world premiere of Captors, the Huntington Theatre Company will host a Jewish Community Night featuring Alan Dershowitz on Wednesday, November 16 at the BU Theatre, Avenue of the Arts (264 Huntington Avenue). Captors, by Evan M. Wiener and directed by Huntington Artistic Director Peter DuBois, tells the thrilling true story of the capture of architect of the Holocaust Adolf Eichmann by secret Israeli agents in Argentina in 1960.

Jewish Community Night begins at 6:30pm with a pre-show wine and cheese reception. The performance of Captors begins at 7:30pm. Harvard University Felix Frankfurter Professor of Law Alan Dershowitz will speak at a special post-show conversation. Admission to pre- and post-show events is free with ticket purchase. To RSVP for the event, please visit huntingtontheatre.org/rsvpjewish or contact Adam Roberts at aroberts@huntingtontheatre.bu.edu / 617 273 1525.

Tickets are available online at huntingtontheatre.org/captors, by phone at 617 266 0800, or in person at either of the Huntington’s two ticket outlets – BU Theatre, 264 Huntington Avenue and Calderwood Pavilion at the BCA, 527 Tremont Street.

In 1960 Buenos Aires, covert Israeli agents have just captured the man they believe is Adolf Eichmann. The agents, many personally scarred by the war’s carnage, hold the architect of the Holocaust in a safe house for ten days. Eager to bring him to justice, they must persuade the captive to agree to stand trial for his actions before they can secretly transport him to Israel. Malkin (one of the agents) and Eichmann, the infamous mastermind, compete in a gripping battle of wills. Tony Award and Pulitzer Prize winner Michael Cristofer (The Shadow Box) plays Eichmann, the world’s most wanted war criminal. Louis Cancelmi (Blasted) plays Mossad agent Peter Malkin.

“Evan illuminates a piece of fascinating, little-known history about power, obedience, retribution, and justice,” says DuBois. “This is an incredibly important story, one I’m so glad we will be telling.”

Adolf Eichmann (1906-1962) was a German Nazi who played a major role in facilitating the mass deportation of Jews to ghettos and extermination camps in Eastern Europe during World War II. Gestapo Chief Heinrich Müller is quoted as saying, “If we’d had 50 Eichmanns, we’d have won the war.” After World War II’s end, Eichmann fled to Argentina where he assumed a false identity and worked for Mercedes-Benz until 1960. That same year, he was captured by Mossad officers – all of whom lost family members in or themselves survived the Holocaust – and was spirited away to Israel to stand trial. He was charged with 15 criminal offenses, including crimes against humanity and war crimes. He was convicted on all counts and was later executed by hanging in 1962. He remains the only person to be sentenced and put to death by the state of Israel. The New York Times calls Eichmann’s story, “One of history’s great manhunts.”

Peter Z. Malkin (1927-2005) was born in Poland and moved to Palestine with his parents in 1933. His older sister Fruma and her family remained in Poland and perished in the Holocaust. As a teenager, Malkin joined the Haganah, an underground army fighting the British for the creation of a Jewish state. Shortly before graduating from high school, World War II ended and Malkin and his family learned of his sister’s death. Malkin served in the army before joining Mossad, the Israeli secret service. He became a trusted agent and was chosen to travel to Buenos Aires to capture Eichmann. On his mother’s deathbed, Malkin admitted to her his role in Eichmann’s capture, telling her “Fruma was avenged. It was her brother who captured Eichmann.”

Brooklyn native Professor Alan M. Dershowitz has been called one “the nation’s most peripatetic civil liberties lawyer” and one of its “most distinguished defenders of individual rights,” “the best-known criminal lawyer in the world,” “the top lawyer of last resort,” “America’s most public Jewish defender” and “Israel’s single most visible defender – the Jewish state’s lead attorney in the court of public opinion.” He is the Felix Frankfurter Professor of Law at Harvard Law School. Dershowitz, a graduate of Brooklyn College and Yale Law School, joined the Harvard Law School faculty at age 25 after clerking for Judge David Bazelon and Justice Arthur Goldberg.

His articles have been published in The New York Times Magazine, The Washington Post, The Wall Street Journal, The New Republic, The Nation, Commentary, Saturday Review, The Harvard Law Review and the Yale Law Journal, as well as and in syndication in 50 national daily newspapers. Professor Dershowitz is the author of 27 fiction and non-fiction works with a worldwide audience. His most recent titles include Rights From Wrong, The Case For Israel, The Case For Peace, Blasphemy: How the Religious Right is Hijacking the Declaration of Independence, Preemption: A Knife that Cuts Both Ways, Finding Jefferson – A Lost Letter, A Remarkable Discovery, and The First Amendment In An Age of Terrorism, and The Case For Moral Clarity: Israel, Hamas and Gaza.

In 1983, the Anti-Defamation League of the B'nai B'rith presented him with the William O. Douglas First Amendment Award for his “compassionate eloquent leadership and persistent advocacy in the struggle for civil and human rights.” In presenting the award, Nobel Laureate Elie Wiesel said: "If there had been a few people like Alan Dershowitz during the 1930s and 1940s, the history of European Jewry might have been different." Professor Dershowitz has been awarded the honorary doctor of laws degree by Yeshiva University, the Hebrew Union College, Brooklyn College, Syracuse University and Haifa University. The New York Criminal Bar Association honored him for his “outstanding contribution as a scholar and dedicated defender of human rights.”