A Brecht Twofer in Dublin and London

Threepenny Opera and The Resistible Rise of Arturo Ui 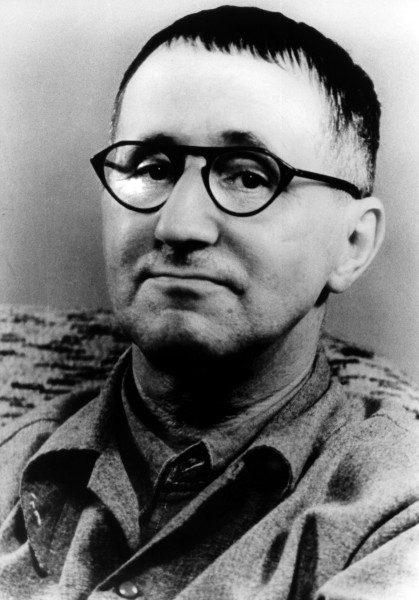 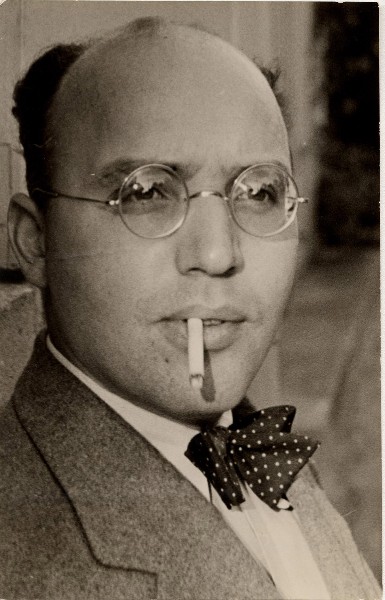 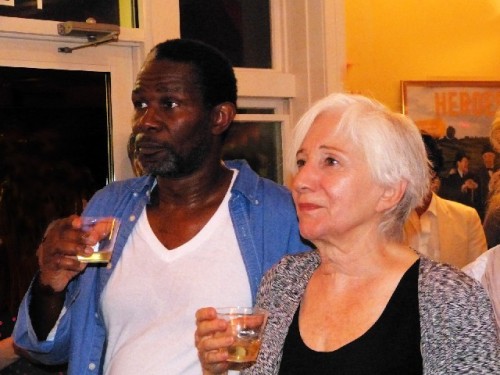 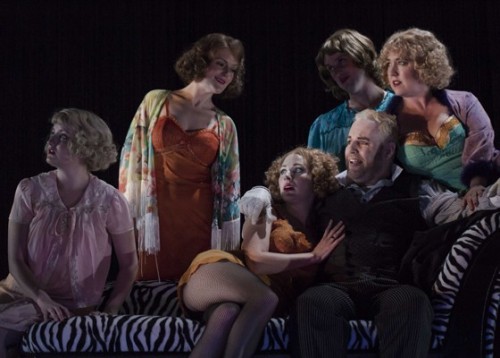 Mack the Knife with his tarts in the Dublin production. 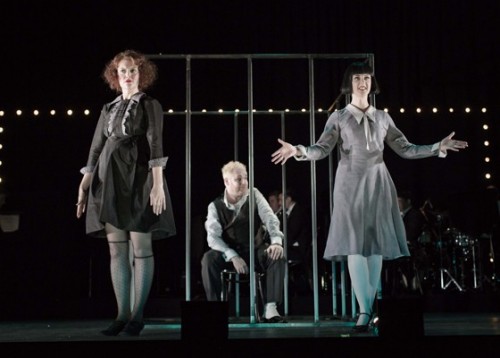 Mickey escapes the gallows with a pardon from the King on his Coronation Day. 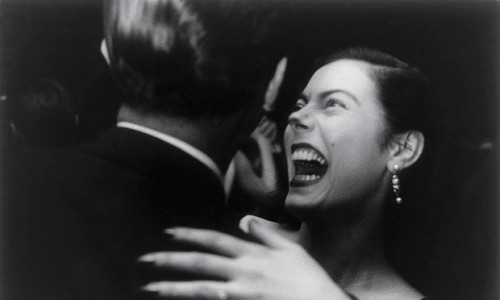 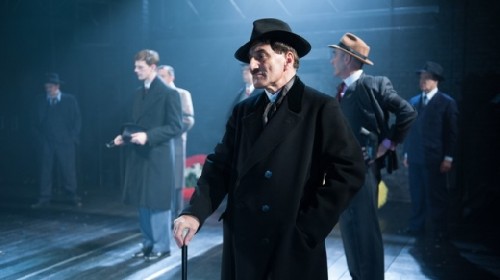 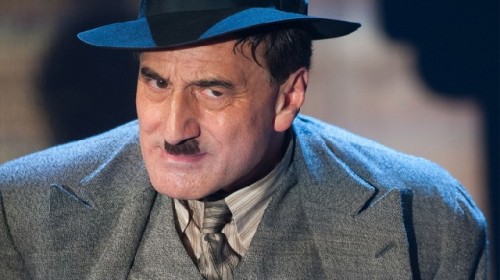 Cornering the trade in cauliflower in Chicago then Cicero. 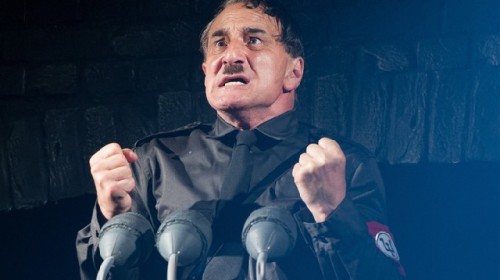 Tutored in oratory by a hammy thespian. 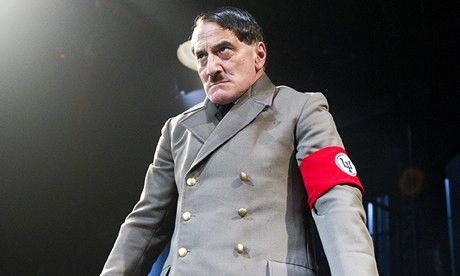 From vegetables to Fuhrer.

During two and a half weeks abroad we enjoyed a double header of Bertolt Brecht productions with the mordant musical Threepenny Opera, a collaboration with Kurt Weill, at the renowned Gate Theatre in Dublin, and the Nazi inspired satire The Resistible Rise of Arturo Ui at the Duchess Theatre in London’s West End.

This past summer Shakespeare & Company presented Mother Courage and Her Children starring Olympia Dukakis. We were fortunate to see her during the opening night performance as she dropped out through illness not long after. Following a hiatus the show completed its run with an understudy.

During that engagement we lingered over lunch with John Douglas Thompson, a member of S&Co who played The Cook. He was motivated by the opportunity to share the stage with the renowned Olympia and her brother Apollo. In a dialogue with Thompson, which has been ongoing for several years, we discussed Mother Courage and Brecht’s concept for Epic Theatre.

Research revealed some primary elements, the most obvious of which were Brecht's polemical Marxist views, and characters as signifiers of the dark side of human nature. Mother Courage, for example, in simplistic terms was a profiteer surviving on the fringes of war as a camp follower. Her reprehensible actions, in a Brechtian view, are meant to deprive her of the compassion of the audience for the losses of her children.

Trudging about the stage dragging that cart full of goods she is intended as an anti-hero. Anathema to the spirit of Brecht, however, Dukakis aroused our empathy. How could one not be profoundly moved by the passion and energy of the renowned actor with a distinguished career?

There are also Brechtian tropes of presenting raw and realistic works devoid of theatrical smoke and mirrors. The staging calls for bare pipes sets augmented by props. There is no complex lighting or use of colored gels. The stage is meant to be flooded with stark white light with no mood altering nuances.

As a didactic ideologue Brecht intended for his morality plays to be starkly specific. Toward that end, leaving little or no doubt of intentions, the plays are augmented by narrators who tells us the where, what, when and why of the experience. Epic Theatre also entails the explicit use of signage. Literally, things are spelled out for the audience.

With this background the Dublin and London productions provided double opportunities to study the theories of Epic Theatre. Of course directors are free to interpret what is most effective for contemporary audiences. This is not always the case with some playwrights or their estates.

It was our first encounter with The Resistible Rise of Arturo Ui while, as Brecht’s most popular work, we had seen other productions of Threepenny Opera. It was, however, my first attempt  to view it through Brechtian paradigms.

Threepenny Opera, the first collaboration with Weill, was created in 1928. It was adapted from John Gay’s popular novel The Beggar’s Opera. While it was first staged in Berlin the musical was set in London during the coronation of Queen Victoria. That becomes a plot point when Mack the Knife is pardoned and escapes the gallows. He survives while morphing from gangster to another form of criminal, a banker. In this production the coronation is enacted for an unidentified King.

In American productions there is always the challenge of casting actors with appropriately low life London accents. Falling on an American ear, in this case, the accents of the Dublin based actors were just fine.

It is interesting to note that the most famous song of the musical “Mack the Knife” is also the first sung by an elegant narrator in evening dress. The song became a top selling surprise hit for Louis Armstrong during the twilight of his career. It was a tune handed to him by his manager Joe Glaser during a recording session.

There were all the elements of Epic Theatre in a wonderful Dublin production. Checking them off there was a bare stage and significant use of props. The smarmy characters were wonderfully unendearing. You expect Mac the Knife to be svelte, handsome and seductive as a renowned pimp and ladies man. A somewhat stout and ordinary looking David Ganly was anything but. But he more than made up for that with compelling panache, swagger and low life duende.

Ganly was perfectly matched with a cutthroat adversary the redoubtable Mark O’Regan as the king of beggars Mr. Peacham with an assist by Jackie Marks as his wife. Charlotte McCurry was nicely balanced as their ersatz chaste daughter Polly who is engaged to the philandering, dangerous Macheath.

The unique music of Weill is a mongrel conflating American ensemble jazz of the 1920s with German cabaret. It is a stretch to call Threepenny Opera a musical in the manner that we now understand the term. Given the nature of their first collaboration it is more accurate to describe it as a play by Brecht with incidental music by Weill.

This production augmented the music in an inventive manner under director Wayne Jordan and musical director Cathal Synnott. The musicians occupied a significant portion of the relatively small stage.

Initially, The Resistible Rise of Arturo Ui, based on an over the top performance by leading man Jonathan Goodman, was a sold out fringe festival hit. It has transferred to the West End with rave reviews and a run that has been extended into December.

Compared to his other stark and demanding plays this may be described as a more accessible and riotously funny satire. It was truly surprising that an evening of the often difficult Brecht, like Mother Courage, proved to be such a hilarious, thoroughly entertaining hoot.

Of course all of the credit for that goes to casting the brilliant and versatile Goodman in an astonishing parody of the rise and pratfall of Adolph Hitler. Like Chaplin’s The Great Dictator or The Producers there is guilty pleasure in laughing at the Nazis.

In New Yorker coverage of the Eichman trial in Israel Hannah Arendt created a fire storm of controversy through her thesis of The Banality of Evil. It is complex and dangerous to fathom the Holocaust as masterminded by nobodies who rose to be administrators of such evil. For Arendt, Eichman was a man of no substance or character who lacked the ability to think. He was the ultimate bean counter and pencil pusher sworn through blind allegiance to a failed artist and lowly corporal during WWI.

Through the devastating satire of Brecht we are amused and astonished by the manner in which Goodman enacts the transformation of the nobody thug, Ui as Hitler, into Der Fuhrer.

The play was written in 1941 while in exile in Helsinki, Finland awaiting a visa to enter the US. The play was not produced until 1958, and not until 1961 in English. Actually Arturo Ui was set in and meant for an American audience.

Brecht drew inspiration from American gangster movies starring George Raft, James Cagney and Edgar G. Robinson. The action revolves around gang wars in Chicago and nearby Cicero. Instead of bootleggers, Ui and his cronies are extorting vegetable sellers for protection. The action with machine gunned corpses piling up on stage is all about cornering the trade in cauliflower.

What an absolutely hilarious metaphor.

The simple set evokes a speakeasy during prohibition in Chicago. While it is a play and not a musical the director, Jonathan Church, has added a vintage jazz combo. Rather than Weill the show begins with a jam session of American standards. There is a fancy woman adding hot licks on alto sax. The period music helps to evoke the ambiance of hot jazz in Chicago.

Again we anticipated Brechtian aspects of Epic Theatre. There were the essential elements of a bare set, props, minimal lighting, a sparing use of signage, and the stridently polemical, Marxist emphasis on agit-prop.

After the musical interlude a narrator appeared to introduce the characters and set the action for the drama. Arturo Ui literally bursts onto the stage ripping through a gangster movie poster.

The first impressions of Goodman as Ui are unimpressive. He is slouched over slithering about among characters that initially have a more formidable presence. His gangster is more of a slug than a thug. As the struggle for power through intimidation and violence ensues there is a gradual and stridently dramatic transformation.

Like Hitler, the smarmy Ui schemes through alliances and betrayals that evoke the events of the rise of the Third Reich. There is a gangster version of the SS raid during the Night of the Long Knives when the celebrating, drunken Brown Shirts were ambushed and slaughtered.

It is Brecht’s challenge to demonstrate how an utter nobody evolved into a terrifying somebody while playing it for laughs.

The greatest scene in Chaplin’s film conveys the Great Dictator in an exquisitely choreographed ballet with the world playfully tossed and bounced about as an inflatable ball.

There is a singularly great and defining scene in Brecht’s play. The ambitious gangster hires an over the hill thespian to provide him with “electrocution” lessons. As an exercise the wonderfully excessive and hammy Keith Baxter coaches Ui through the “Friends, Romans, Countrymen” speech from Shakespeare’s Julius Caesar.

Before our eyes, with horrifying humor, we see Ui transformed from petty hood to posturing, charismatic orator. It is astonishing to see him adopting the familiar postures, poses and devices that Hitler used to mesmerize and transform a nation into anti Semitic, violent, criminals and fanatics. With comedic brilliance we watch as Goodman’s Ui discovers and develops the signature Goose Step.

We are aghast as Ui is thrilled by the newly acquired theatricality of how to impersonate power and authority through artful stagecraft. Brecht reveals the mythology of Nazi use of propaganda and pageantry. Hitler brilliantly exploited artists like Leni Riefenstahl, the architect Albert Speer, and the inventive propaganda of Dr. Goebbels. Brecht with grim humor, through Ui, demonstrated how Hitler sold his evil ideology to the German people.

As they say everyone loves a parade with soldiers in nifty uniforms. Speer designed the million person Nuremberg rally which Riefenstahl filmed creating the epic propaganda film Triumph of the Will. It is still regarded as a masterpiece of its genre. Considering that the media of today did not exist her film was a vital tool of the Reich. One cannot underestimate its impact and influence.

In the final scene, a parody of a Hitler rally, we see Ui in uniform speaking from a towering podium. The curtains surrounding it fall away revealing a pyramid of skulls.

Removing his signature moustache Goodman steps out of character as Ui.

Looking out at the audience he delivered a stunning and memorable final line. “The bitch that spawned me is in heat again.”

As Hermann Wilhelm Göring said "Whenever I hear the word culture I reach for my gun.”