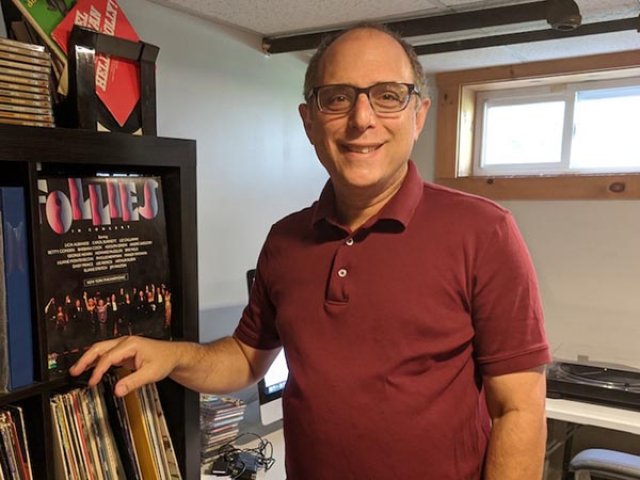 Photo from www.soundsofbroadway.com. Stuart Brown has no shortage of material when it comes to musical theater.

If people listening to the online radio station “Sounds of Broadway” wanted to hear songs from 1600 Pennsylvania Avenue, they were in luck. Although the legendary 1976 Broadway flop that ran for seven performances never boasted a cast album, one listener asked if he could send the station files of songs from the show. Someone had recorded them live. Station founder, host, programmer, and personality Stuart Brown said “yes,” and played the songs.

“How many stations will talk to a listener and say ‘Oh yeah, send me that,’” Brown wondered aloud. In fact, Brown had received e-mails before from the person who sent those files. He was a regular “Sounds of Broadway” audience member.

To Brown, the aforementioned anecdote illustrates how a radio station’s engagement with its audience can aid programming. The keys to the station’s success include audience engagement and variety, Brown says. Indeed, people “thank him for not just playing the same old stuff,” he adds.

For example, the station plays songs not just from the classics, but from “Unsung Broadway.”

“Not every Broadway show has ended up with an original cast album,” Brown wrote on the station’s website, soundsofbroadway.com. “In 1994 the Varese Sarabande label put out a series of studio recordings titled ‘Unsung Broadway,’ which included some of the best songs that never made it onto vinyl.” And If you want to hear such songs, “Sounds of Broadway” will accommodate you – it plays them from 11 a.m. to noon EST on Fridays.

In addition, “Sounds of Broadway” plays music from current Broadway shows, from new shows such as Jagged Little Pill to classic such as The Phantom of the Opera. Also, there’s a Composer Series. It features an hour of music from seven different composers. Brown lists the line-up on the station’s website. Meanwhile, “Lost in Boston” runs on Thursdays.

“The Varese Sarabande label put out a series of recordings titled ‘Lost in Boston,’” Brown explains on the station’s website. The phrase refers to songs cut from Broadway shows in their out-of-town tryouts.

Perhaps, you might want to hear something that the station doesn’t ordinarily play. If so, you can request a song at https://soundsofbroadway.com/requests. The station plays requested songs from 8 p.m. to 10 p.m. EST daily.

Recently, the station went live. In preparation for the live session, Brown encouraged listeners to “make requests, let us know where you are listening from, send us pictures, thoughts of the station…bottom line is we want to hear from you.”

“I want to engage with the audience,” Brown says. “I definitely want people to contact me.” To do so, visit https://soundsofbroadway.com/contact.

In fact, Brown said that he responds to every e-mail he receives – and that most websites cannot make this claim. Brown says he receives about a dozen e-mails a week. But even if that number jumped to 100, “I will get back to everyone. I want the listeners to know that there’s a person behind the microphone – not just someone hired to read a script.”

However, Brown doesn’t sound like someone who needs a script; the 63-year-old Connecticut resident’s experience with musical theater stretches back to his middle and high school days. For a number of years, every Christmas Eve, the New Jersey native’s parents took him to see a Broadway show. During a trip to New York City, a friend encouraged him to attend a show that Brown was reluctant to see. It was the 1972 musical Grease.

“It was the funniest, most tuneful show,” Brown says. After experiencing that beloved musical, every couple of months Brown returned to the city for more Broadway.

For Brown, seeing a national touring production of Promises, Promises whetted his appetite for live musical theater. And experiencing Grease “satiated” that appetite, spurring him to continue his New York trips.

Brown, who has always dreamed of owning a radio station, boasts a long association with radio. It began at WRSU-FM at Rutgers College in New Jersey in the late 1970’s. And for the past 25 years, Brown has had a weekly radio program titled “On Broadway” on WRTC-FM, Trinity College in Hartford, Conn. He founded “Sounds of Broadway” in March 2019.

In addition to his work in radio, Brown is also a theater critic, president of the Connecticut Theatre Critics Circle, member of the American Theatre Critics Association, and a university administrator.  If theaters were currently open, Brown says he’d be so busy he probably wouldn’t sleep at night.

Apparently, Brown’s work on “Sounds of Broadway” has yielded positive results. For instance, according to its website, the station’s audience has been increasing by 50 to 60 percent a week. In particular, as of Nov. 11, the station has 72,000 listeners a month from dozens of countries, and this figure is rising by 50-60% a week.

“I anticipate to hit 100,000 by Thanksgiving,” Brown says. He has relied on word of mouth to publicize “Sounds of Broadway.” And “once people find out about the station, they’re listening to it a lot,” says Brown, who, in addition to music, offers listeners “pithy remarks about a show” as well as fun facts.

His greatest joy, he says, is receiving e-mails from people who love the station so much, they can’t turn it off.  Also, “it’s very gratifying that, number one, I get to reach so many people from around the world, and number two,” to entertain while educating listeners at the same time.

While Brown hasn’t worked in the theater, he gained his knowledge from years of theatergoing.

“I have every Playbill from every show I’ve ever seen,” he says. In addition, he owns more than 1,000 cast albums; he’s collected for the last 30 plus years. And for the last six months, Brown has been digitizing music from vinyl records for his radio station. Brown organizes the hundreds of shows from which he draws through a spreadsheet. He plays songs from the shows on a rotating basis. From the well-known to the obscure, there’s something playing on “Sounds of Broadway” 24/7. But it’s not just Broadway from which Brown draws. He also plays music from Off-Broadway, the London stage, “and much more.”

While the station plays plenty of music, it also offers features such as trivia challenges. Visit https://soundsofbroadway.com/trivia/ to test your knowledge.

What is Brown’s favorite show? After all, between New York and Connecticut, he estimated he sees between 60 to 70 shows a year. When Brown considers the hundreds of musicals he’s seen, Grease is in the top 10, he said.

As far as straight plays go, Brown said he programs them as “special events.” For instance, when the playwright Murray Schisgal recently died, “I played an audio recording, in its entirety, of his play ‘Luv,'” Brown said.

What are his long-term goals for the station? Brown said he wants to see “Sounds of Broadway” continue to grow, expand further outside the U.S., and become self-sufficient.

In the meantime, Brown emphasized his wish that people contact him about “Sounds of Broadway.”

Specifically, he wants folks to carry the following thought in their mind: “I feel like I can connect with Stu.”