Albee's At Home at the Zoo

Acting Up Production in Indianapolis 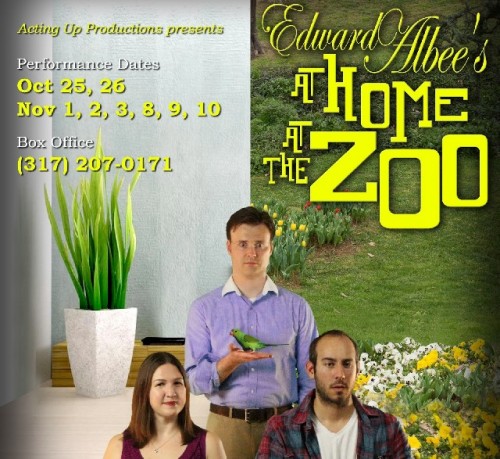 The poster for the Acting Up production in Indianapolis.

Acting Up Production of “At Home at the Zoo” is a unique play to say the least. Originally presented as a one act production called “The Zoo Story,” the playwright added another act to the beginning of the show decades later. The result is a strange but fascinating blend. The first act (the newer of the two) introduces us to Peter and Ann, a content married couple who somehow end up discussing delicate issues.

The couple, played by Allison Reddick and Joshua C. Ramsey, are convincing as a pair who have grown accustomed to monotonous lives. They’ve established a comfortable life, but like most couples, they long for a bit of excitement. Ann begins to wonder if they wouldn’t benefit from a little disorder.

The second and more well-known act follows Peter (Ramsey) as he goes to Central Park to spend the rest of the afternoon reading. While there he meets an odd man, Jerry, who strikes up a conversation. The added first act gives more depth to Peter’s character, but it’s Jerry who steals the show. Scott Russell’s whirlwind performance as Jerry is impossible to look away from. He is a volatile individual and as the situation escalates we find ourselves, like Peter, captivated by Jerry’s odd behavior and bizarre stories.

The show’s simple staging and deft direction by Scot Greenwell encourages the audience to focus on the dialogue. It makes you think about both the absurdity of the situation and its realistic nature. The first act is all about control and normalcy; Ann and Peter are infinitely relatable in their ordinariness. The second is about chaos and how it unavoidably creeps into peoples’ lives.

It’s also a study of loneliness, both of people who are alone in the world and of those in relationships that leave them feeling isolated. The play explores what that loneliness can make us do. Humans strive for connection and sometimes those connections aren’t positive ones.

The play deals with adult themes and language.

Acting Up offered a talk back after the show to discuss the play with the cast and crew.

The play ran until Nov. 10. on the Theatre on the Square Mainstage, at 627 Massachusetts Avenue, Indianapolis.