The Primacy of Visual Cognition in Western Art

From Caravaggio to Cezanne 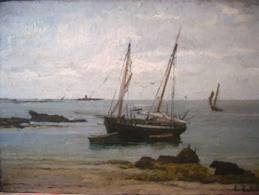 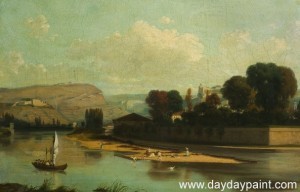 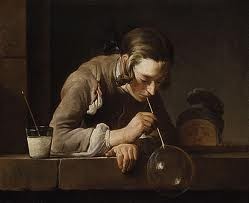 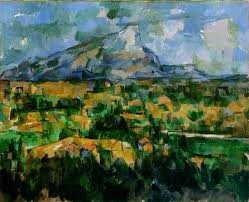 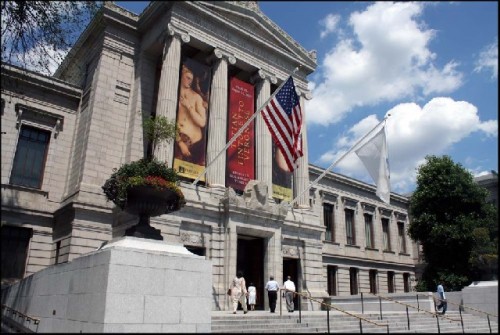 The Museum of Fine Arts Boston.

Impressions of France: Monet, Renoir, Pisarro and Their Rivals
Fall 1995,The Museum of Fine Arts, Boston

“Impressions of France”, a somewhat unwieldy exhibition of French landscape painting from the mid to late 19th century documents parallels and differences between mainstream landscapes painted principally for purchase by the French State and those of the Impressionists.

Although contemporaneous the Impressionists were not initially considered worthy of acquisition by the French Government. The work of Cezanne, Pisarro, Monet and Sisley on view represented a way of seeing that is now considered to be the foundation of modernism. On the other hand, in the Salon landscapes, we witness the winding down of a universally accepted style. It had had its origin in the Baroque, which in the hands of the French Salon painters, became decidedly decadent.

This simultaneous winding down of one style and the burgeoning growth of another raises questions of how, historically, styles succeed one another. The notion of what is decadent and what authentic loomed large in this show. Most importantly it underscored the role that individual vision and imagination play in establishing a new style.

According to Michael Baxandall’s book ”Shadows and Enlightenment” scientists and artists of the 18th century were interested in the nature of perception. In particular, the way the retina translates patterns of light and dark into form. He stated that the authenticity of an artist such as Chardin lies in great measure in his ability to convey the notion that the observed is the invention of the seer.#1.

The painting's center of gravity is always within the observer. The acceptance of a unique light source, and the fluency and immediacy of the brush strokes, contribute to the sensation that we are inside the artist’s consciousness. Although the narrative and the social implications are important, the studied expression of the perceptual experience as visual event is primary.

In the case of the salon painters the center of gravity seems to lie outside the viewer in the landscape. With its story the landscape would convey to the socially dominant class that might purchase the painting. All socially relevant detail is explicitly represented: The geographical location, recognizable monuments such as Chartres Cathedral, the social class of the people in the landscape (usually peasants). The brush strokes vary within each painting depending on what they are conveying .The formulas and motifs are repeated enough to be identified as such. Over and over we are served up the road narrowing in perspective with several individuals strolling along this road. It reaches its vanishing point midpoint on the horizon.

The overwhelming mood of the Salon paintings is one of melancholy . The oversized canvasses with their large expanses of sky, sea or field induce a feeling of disorientation . The preferred time of day is dusk. The self that is manifest is not the strong self that eventually dominates 20th century art from Picasso to deKooning and Serra.

In the Salon paintings man is clearly not the measure by which the expanse of space is parceled out. These artists believe naively in the illusion that chiaroscuro creates.  Once that illusion is established, the references to social narrative abandon both the facticity of the objects represented, and the object making ability of the eye.

The artist's space is neither universal nor personal but one of shared social assumptions and prejudices. Especially with assumptions based on institutions such as the Church and the Bourgeoisie, which represent the conservatism of the prevailing social order. To convey the dominant role of the former, Churches figure prominently in many of the paintings. They reassure the Bourgeoisie of its control over the working class with comforting images of peasants quietly accepting their burden of labor in the fields. This motif fills numerous landscapes.

How were the Impressionists capable of becoming the “forerunners of modernism” affecting ultimately a sea change in art? This paradigm shift relegated their academic competitors to the dustbin of history. Merleau-Ponty in an insightful essay on Cezanne, entitled “Cezanne’s Doubt,” provides a possible explanation in his description of the psyche of the most important artist of the pre-modernist revolution. #2

In Merleau-Ponty’s view Cezanne was clinically schizophrenic. Felicitous human interaction was beyond him. Most of his personal relationships were fraught with suspicion. Over the course of  life he appeared, according to the observations of townsfolk, to become more and more embittered and alienated.

Although lacking in the social skills of the world, and according to his childhood friend Emile Zola, insensitive to the social and political issues of the late 19th century France, he was exquisitely attuned to the shape that the impressions of the observed world took within him. These are impressions not shared with his fellow citizens. There are no labels on his paintings either figuratively or literally.This is  unlike the name on the stern of a boat on Elodie La VIllette’s painting that situates the landscape  in Dieppe. A church or anything recognizable except primordial rocks, trees and sky, does not dominate Cezanne’s landscape. The impressions are configured into an architecture where each stroke is part of a whole. There is no sloppy variation of style from part to part as we see in the Salon painters.

The thrust of Merleau-Ponty’s essay is that Cezanne’s illness defined his attitude toward painting. Merleau-Ponty goes to great lengths to distinguish this emotional background from Cezanne’s project. Starting from the hand that nature dealt him Cezanne builds out of it a noble oeuvre.

What I find helpful in this analysis is the notion that Cezanne’s illness made him incapable at both the personal and societal level of reading the social signs that bind us to society. At heart he remained unsocialized. That condition eminently qualified him to focus on the inner experience of apprehending the landscape as landscape rather than the role it plays in French Culture. Everything is turned inside out. The roads that meander off into the horizon from the bottom of the painting, in a large number of the Salon landscapes, are present in Cezanne’s paintings. However,  he subverts the expected reality so that the road ends up closer to the viewer at its vanishing point than where it began. What serves as an entry point into the painting for the salon artists actually functions as an obstacle to entering into Cezanne’s painting.

Seeing the work of Cezanne side by side with his once well-established contemporaries accentuates the common notion of Cezanne as “farouche.” The juxtaposition renders the Salon artist more insipid than they would appear beyond the context of this show.Cezanne’s choice of what to paint reflects the thought processes of someone who “just doesn’t get it”.

In one small landscape (most of the Impressionist works are noticeably smaller than those of their salon counterparts) he painted a landscape with branches obscuring the road. One can almost imagine that he was dropped blindfolded before the scene and asked, when it was removed, to paint unflinchingly the scene before him. He would be forced to abandon all conventions and go beyond the narrative constructs that lock us into daily life.


La Villette, Bavoux and the countless unknown artists of the late 19th century continued to paint in the now fatigued manner of the once radical concepts of chiaroscuro and perspective. Cezanne dropped down from the retina, which is the locus of value perception, to the striate cortex of the brain where the values are analyzed according to verticality, horizontality and diagonality.#3

Just as Caravaggio’s rigorous and powerful use of chiaroscuro spread rapidly throughout Europe to define the styles of Velasquez, Rembrandt and Vermeer, Cezanne’s understanding of the role of line direction, and its relations to seeing space, became the raw material for Cubism, Minimalism and various optically based art forms of the 20th century.

The implication of my interpretation of Cezanne’s personality on a general notion of the evolution of the language of painting, is that stylistic change can be achieved not only by deconstructing the current visual language, but by going beyond it to the underpinnings of that language which are not yet culturally appropriated.

Those thinkers and artists who promote modern paradigms of cultural revolution that aim to deconstruct accepted ways of seeing at a cultural level, in order to go beyond them, would do well to study Cezanne.

That the possibilities of the language of chiaroscuro had run their course could only be understood by a few people, who were not easily seduced by its current incarnation as a vehicle for describing the social order of the late 19th century. The creation of these artists was a new language, more vigorous and inclusive of varieties of the visual experience. It grew out of how the landscape was internally apprehended, not what is was supposed to represent externally to the class of collectors and cognoscenti of the time.