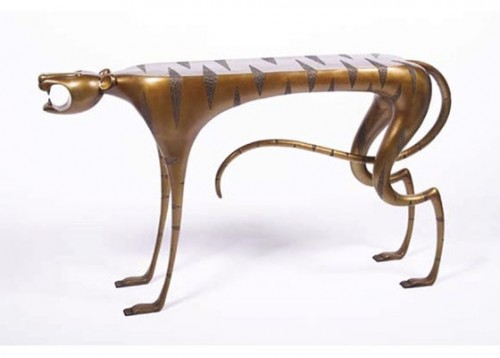 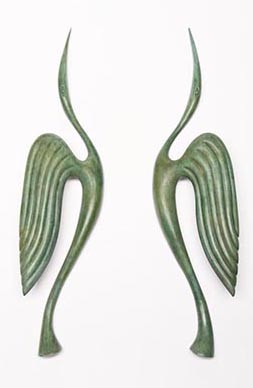 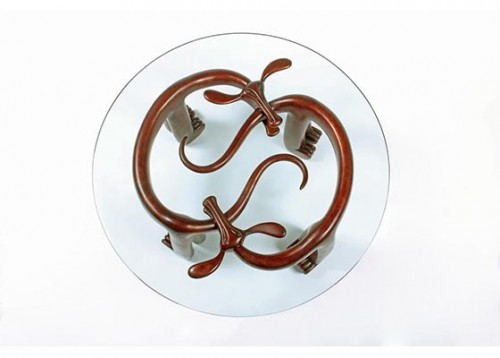 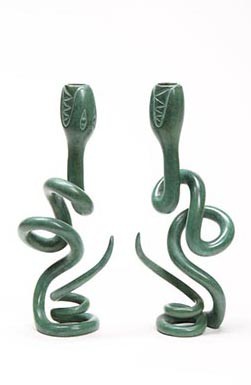 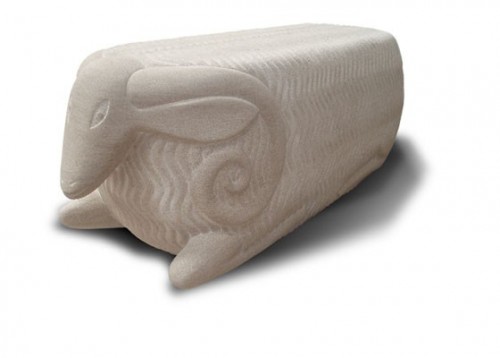 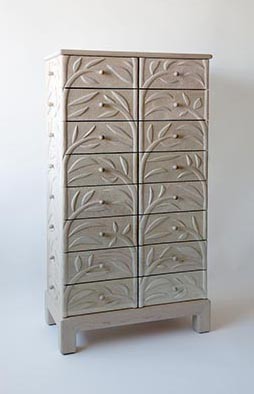 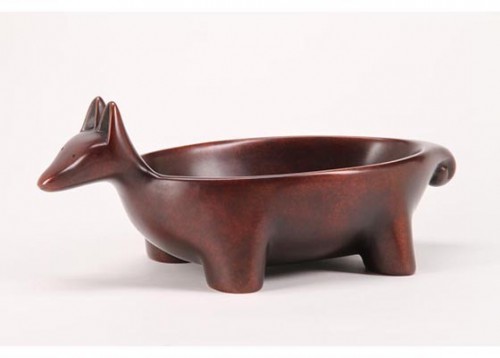 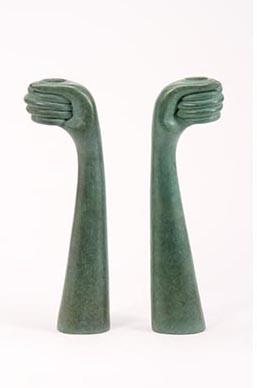 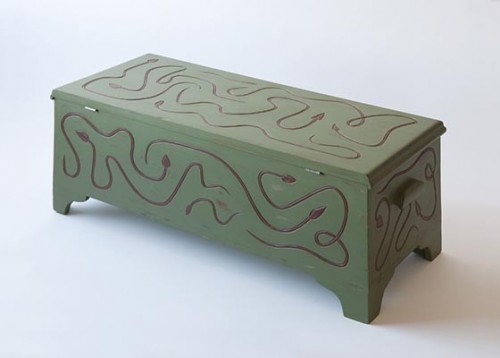 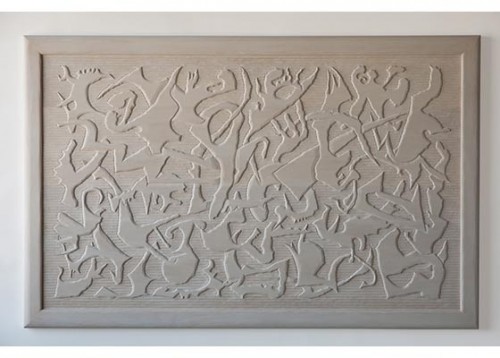 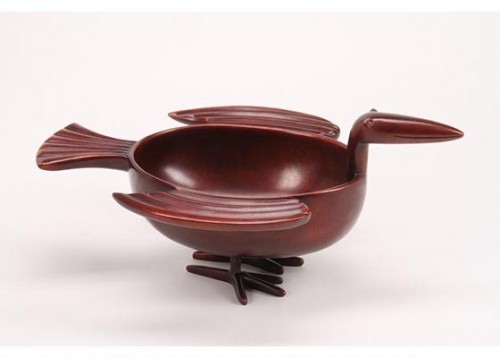 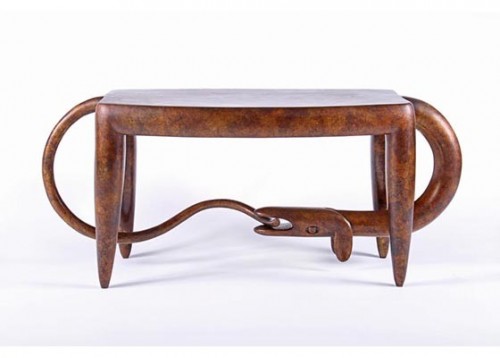 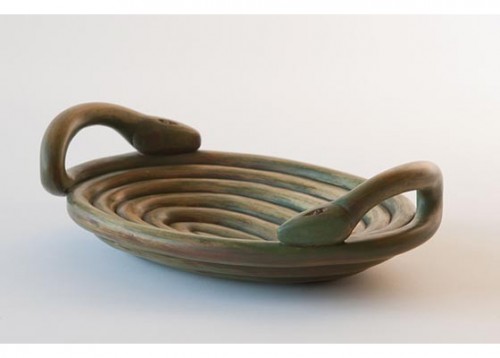 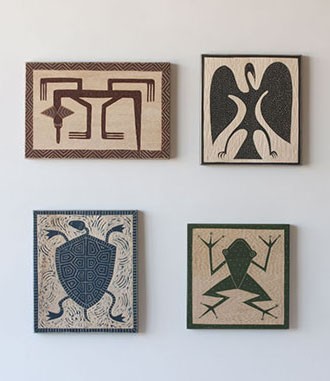 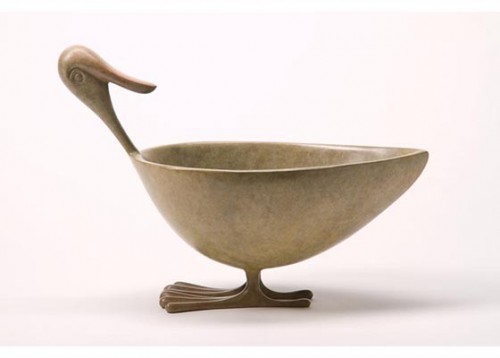 Without much debate, the most lauded studio craftsman to have developed in this region in the thirty years of the contemporary studio furniture movement, Judy McKie, is exhibiting at Gallery NAGA a large and varied exhibition of new often unique work in both carved and painted wood and new editioned pieces in bronze and limestone. This is the work of a true master.

The same day of Judy McKie's Gallery NAGA opening, November 12, 2010, the Boston Museum of Fine Arts opened its new Art of the Americas wing. In a newly published companion catalog/book, Highlights of American Decorative Arts and Sculpture, cherry-picking the absolutely best of the MFA's collection, not surprisingly Mckie's Leopard Chest is notably featured.

In 2002, the art critic Arthur Danto wrote about her work: “The animals are not, so to speak, taken out of their natural habitat and domesticated to serve a function. The furniture is their habitat. They have no existence outside the furniture that is their sphere of being, since that determines how they are going to look…But how marvelously form and function interplay in McKie’s pieces! What first strikes one in McKie’s use of animals is how friendly and often how funny they are. They have entered our interiors as helpers and companions.”

The show’s catalog includes a conversation between McKie and Gallery NAGA director Arthur Dion that took place when he visited her studio last July. Here’s an edited excerpt:

AD: Now that the bronzes are wrapped up, you’re hard at work on the carved and painted pieces?

JKM: The bronzes were what I started with, to give the foundry a head start.

AD: Every one of the bronze pieces you’ve done for the show is significantly new in some way.

JKM: It’s hard not to repeat yourself, and I try not to, but then I have certain forms that I’ve done as editions. Sometimes, if I’ve made a round table in bronze and that edition is sold out, I want to make another round table. It’s a challenge to keep them different.

AD: The Tiger Table is magnificent.

JKM: Well, good. I think of that table as pretty benign, but some people have reacted to it as being a little fierce looking.

JKM: Yeah? I actually had a whole other head on that table, and I didn’t like it.

No, much less snarly. I just chopped it off, did a new drawing, and added a new head.

AD: Its attenuation reminds me of the Rabbit Sideboard [a 2003 glass-topped piece], so thin and lyrical down low.

JKM: I wanted the legs to stay really thin and to take a lot of curve. It’s the thinnest I’ve done. It’s only about one inch in diameter.

AD: Before you even did the bronzes you drew the wooden work.

JKM: I certainly drew all of the bronzes and worked on them and then possibly stopped and drew some more. I did the drawing for the Abstract Headboard after I designed a lot of the other things. I was at a point where I thought I really needed to break away from animal forms and think about another way of working.

AD: It’s out there for you.

JKM: Yes. It’s a new approach to design for me.

AD: You’ve worked with abstract pattern, but it’s always been geometric and linear. This isn’t even biomorphic. What is it?

JKM: What would I call it? Almost hypnotic. I almost put myself in a hypnotic state to do that drawing without stopping. Every time I moved the pencil I was trying to make each shape more interesting than the one before. When I finished I thought, “Well, that’s an interesting, different kind of drawing for me, and I think it could work as a headboard.” It’s a little impractical because it’s taken me at least three months to carve it.

JKM: It is crazy. If you design something to be carved, most people who know anything about carving design around what’s easy to do. And this is so uncarvable really. I mean, it’s just absurd in terms of carving. It stays unique to me because no one in their right mind would work that way.

AD: So at this point, thirty-plus years into your work, do you have a perspective on your new work in a larger context?

JKM: I feel the furniture world has changed. There are all kinds of people making furniture “objects.” For furniture to be useful you have to consider dimensions and comfort and all kinds of other issues that don’t allow you to do exactly what you might want to do. And that’s maybe why things are moving from the direction of furniture that is useful to furniture that’s art, because of the limits. I have always felt strongly about wanting to make things that are completely functional and interesting visually. That’s the challenge.

AD: And we’ve always been very clear that it’s furniture, and we’ve always wanted it to work beautifully. We always figured that was part of the password for getting in.

JKM:I want the furniture to be sculptural, really I want everything about it to be interesting to look at, which is what sculpture is, but it has to be completely useful as well.

Judy McKie works begin as very simple forms, and even though they have decoration on them, the decoration tends to blend into the form. You see the forms first while the decoration is an intrinsic part of the form. This is underscored by her love of carving in relief and in the round. Foreground and background work in unison.

Though working as a traditional craftsperson, Judy McKie is contemporary artist in every aspect of her work. Her work resonates with a quality beyond the purely visual, beyond the imagery and content, beyond the fine materials and technique, and even beyond the extraordinary craftsmanship and artistic touch. The sum is greater than whole.

What is most wonderful about McKie's work is that every piece that she creates is a stand alone sculptural object. Animal imagery is a major aspect of her broad visual vocabulary. However, these are not representations of clearly naturalistic animals, but creatures with spirit, movement and a natural yet abstract quality. Somehow all of her pieces convey an extraordinary sense of both hard and soft, serious and playful while being somehow simple but complexly enriched. A sense of whimsy permeates all her pieces and is intertwined with form and function that is full of graceful energy.

Because she was trained as a painter at the Rhode Island School of Design (RISD), her refined taste, her sense of proportion and scale, her use or non-use of color and even her placement of images come from her painterly background. She also hates to repeat and therefore is always striving for something new either as functional object or as animal or abstracted form.

Like each of her other every two year exhibits, this exhibition is made up of small, medium and large pieces. All are human-scaled. Judy likes a challenge, so she tries to do new functional objects to keep fresh. She creatively engages with various materials ranging between wood, limestone and bronze. A favorite material is carved and painted Obeche, an African tree wood. Several Wall Plaques created in Obeche are part of the exhibit. There is pent up demand for her work. By the close of the first full day of the show, much of the work in the exhibit has already been sold.

Some of the larger works in the show are show-stoppers. Exhibiting McKie's usual graceful and sublime talent, Tiger Table is a sleek, snarling side table that elegantly and ornately fulfills function with form. The white on white Abstract Headboard, Round Hound Table and the Dog Bites Tail Table Bench both demonstrate abstraction as whimsical narration and structural cleverness. The eloquent Ram Bench is reminiscent of Assyrian stone carving and a dreamlike illustration from a beautiful children's book.

The Blanket Chest With Snakes is one of the most unique pieces in the exhibition. Bought at an antique store, it is the first found object that Judy McKie has ever worked with. The cedar chest's size was perfect to the artist. Feet were added to it and the exterior of the chest was painted, carved and stained. It is a magnificent ornamentally restrained functional object.

The pleasure in seeing the smaller pieces is that all of Judy Mckie's works are thematic and contextural without being derivative. McKie has a personal mythology where animal forms become abstracted yet recognizable, anthropomorphic while strangely primeval. This is particularly true of Dove Door Handles where form and function intertwine. Smaller metal pieces, including Helping Hands Candle Holders and Snake Candle Holders, visually state function by the expression of their form.

This thematic approach is underscored by Bowl With Snakes and Duck Bowl where the pieces visually border between feeling ancient, even primitive and yet contemporary. Duck Bowl has the physical presence of an important object unearthed from an archeological treasure trove while resonating a modernist elegant abstracted grace. This is a small masterpiece. The Bird Bowl and the Dog Bowl have a richly hone primitiveness created by the best of tribal craftsmen.

Several years ago, I wrote that Judy McKie's prolific gifts are evident not only in her sensitive decorative details, but also in the basic form of her pieces. This is as true today as decades ago. She is able to reach beyond the functionally beautiful to the spiritually joyous, from pure craft to something truly artistic, and from the clearly objective to the aesthetically profound. Judy McKie continues to joyfully and creatively animate the inanimate.