Mile High with the Denver Philharmonic 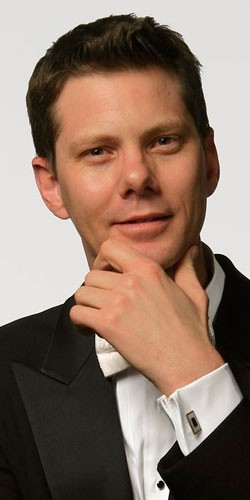 Adam Flatt, thoughtful and fun, leads the Denver Philharmonic with aplomb. He is a young conductor on the go all over the US. 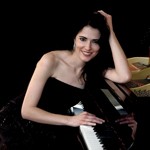 In Denver, near the State Capitol building, whose real gold dome shines out into the night, the Denver Philharmonic performs at KPOF Hall seven times a year.  The venue has wonderful acoustics and the orchestra, under conductor Adam Flatt, a protegee of Marin Alsop's, was splendid and sprightly as they performed a wide variety of music, familiar and not so familiar, in its second concert of the season.

Children both sat and scrambled all over the balcony, never disturbing however.  The Philharmonic provides a ‘cry room ‘ in case that's what you would like to do.

In a pre concert lecture, a young associate conductor A.C.E. Edewards talked about  folk music's integration into compositions of the late 19th century and up to the present. Brahms had been living in Hamburg when refugees from Hungary passed through and the 2nd Concerto incorporates some of their folk tunes.  Edewards also noted that Clara Schumann and Brahms had discussed the difficulties of performing the 2nd piano concerto.  Brahms encouraged Clara: If I can play it, you can.

From the first notes struck in the Kodaly it was clear that the orchestra was in the hands of a terrifiic conductor, who approached the scores with passion and enthusiasm, while holding the music within a controlled frame that celebrated the details. A delightful clarinet cadenza performed by Shaun Burley, was picked up and turned this way and that by a flute, piccolo, oboe and finally a horn.

The Effinger Symphony was preceded by a short talk by the composer's biographer, who located Eppinger in the tradition of Roy Harris and Aaron Copeland, but noted that he was more interested in depicting Colorado the place than in finding and including its vernacular. Lovely soaring phrases and harmonies gave the feel of the great Rockies, but like a photo instead of a painting, left you wanting more to dig into. Yet programming local artists is important for orchestras.

There was a rousing performance of the five anthems of our military forces, each introduced by a Navy officer here in Colorado on a recruiting assignment. Retired members of each military branch stood as their service song was played, a staunch tribute to our forces on Veteran's Day,11/11/11.

Following the intermission, Katie Mahan gave a dramatic and emotional performance in the Brahms 2nd Piano Concerto.  Beginning with an unusual horn solo played by David Wallace, Mahan, with the flourishes of a diva, began her cadenza followed by a wild concoction of stormy melodies. In quieter sections of the Concerto she displayed an interpretive sensitivity. Many young performers today provide a passionate display contemporary audiences expect as they arrive from the rock world. Mahan does not use her star dramatic turn to cover inadequacies, but rather to highlight her singular skills.

The Denver Philharmonic continues a distinguished tradition which began with conductor Antonia Brico.  Brico conducted all over Europe and with the New York Philharmonic and the San Francisco Opera but she was not able to get the job of Music Director until she arrived in Denver.  Among her promoters was the composer Sibelius. She was a woman who arrived at the peak of her profession when women conductors had a very rough time.  Denver to its credit embraced her.

The Denver Philharmonic has always been committed to community outreach and particularly to bringing young people into its performances to introduce the pleasures of classical music and to educate audiences in the variety these forms offer. As larger symphonies around the country struggle to keep and build audiences, they would do well to look at Denver, where classical musical is flourishing for the old and young alike.