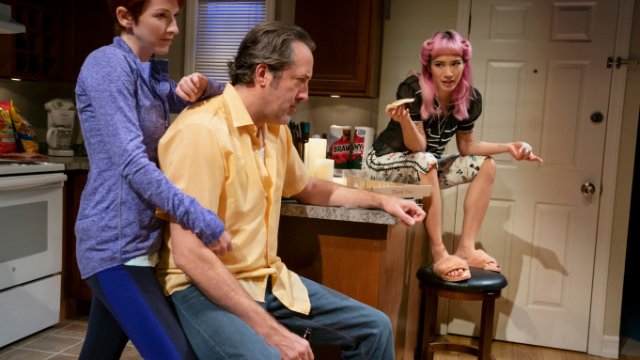 Linda Vista means beautiful scene but in the play of the same title by Tracy Letts’ there is a certain irony in it. Because the view/scene scarcely beautiful.

Wheeler is a 50+ year old man in the midst of a divorce, moving into an apartment. His life is a “hot mess” and has been for years.  We can’t enumerate the multiple ways it slowly deteriorating.  Wheeler has enough flaws to create several tragic heroes.

Yet we all know or know of people like Wheeler.

Ian Bradford doesn’t try to pull on our empathy is his portrayal of Wheeler, although Wheeler will do exactly that.  We might call him a loser: the divorce is contentious apparently precipitated by his infidelity. He gave up on a career as a photographer specializing in documentary portraiture and now works as a camera technician in a small store. He has strong opinions about many things including motion pictures and current culture that he is absolutely convinced are correct. He doesn’t like much that is modern. And to add to these flaws, despite being well aware that he is no Adonis, he is constantly seeking female companionship.

Yet, at least in the first act there is something endearing about Wheeler. He is so out of place that you can see why a woman might want to “fix” him. He has  self-deprecating humor and  sad sack persona that some find a challenge and attractive. Certainly Jules, a life coach, does when his friends set him with her. Of course, he can barely contain his sarcasm when he learns that she has her academic degrees in “happiness.”

He does seem to have some good qualities. He is protective of Anita, who also works in the shop and is the subject of their boss’s sexual fantasies. Of course, he would like to be “more than friends” with Anita, but accepts that she is not interested. And then there is Minnie, a young Vietnamese woman who lives in the same apartment complex and knocks on his door one night when her boyfriend has beat her up and kicked her out. Wheeler takes her in.

While act one is humorous, things turn less enjoyable in act two. Wheeler’s “act” begins to wear on the audience. He derails his relationship with Jules, refuses to see how Minnie is using him and deludes himself about the relationship; even his boss’s fantasies about Anita become more and more disturbing.

What is Letts trying to say? It may be a commentary on modern society or how so many men have lost their way in the modern world. Or perhaps he is showing us the ultimate in midlife crises and making us consider our reactions to Wheeler. For he may be a “litmus” test for us all. He is at times well meaning, but often with an ulterior motive; he has given up on himself, but still wants some unidentified “thing:” he is both realistic about himself and deluded. It appears that at times, he is trying to alienate people and then he will turn around and do something generous.

This production from Chicago’s Steppenwolf Theatre where it premiered is well directed by Dexter Bullard.

Bradford and almost of the cast has been with the show since its inception. They are comfortable in their characters and know them well. Other standouts in the cast are Cora Vander Broek as Jules, who has finally learned to protect herself and Chantal Thuy as Minnie.

It may not be totally successful, but a Tracy Letts play, particularly one performed by members of the Steppenwolf company, is always an interesting evening in the theater.

It is at the Helen Hayes Theatre, 240 W 44th St. Tickets are available through Second Stage.