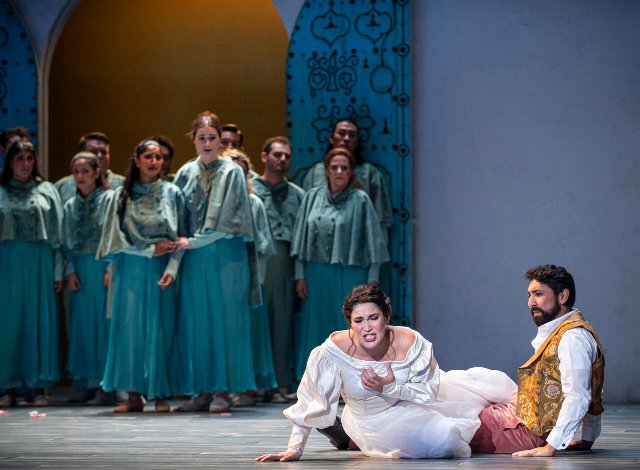 Ladies and Gentlemen – please welcome Opera San José back to the stage of their lovely home, the California Theatre.  After 20 months of pandemic-induced darkness, OSJ has returned with a carefully-selected, one-hour opera, “Dido and Aeneas.”  Although it was chosen nine months ago, when live performance strictures were stricter, two characteristics still make it ideal.  First, it is brief, which means the audience remains stationary indoors for a short period.  Second, and uniquely, the entire orchestra is masked, as the composer’s orchestration calls for no wind instruments.  OSJ’s configuration includes about two dozen strings, including a harpsichord, and one percussionist.  Clever thinking by the decision makers.  And to make it better, the company provides an outstanding rendering of the opera.

Rarely has an esteemed opera endured the ignominy of its birth as “Dido and Aeneas.”  Although its composer, Henry Purcell, would reign as the preeminent producer of serious British music from his death in 1695 until the 20th century, his only pure opera borrowed slavishly from a crypto-opera, John Blow’s “Venus and Adonis,” that has not even remained in the canon.

Structurally, it follows the predecessor’s tragedy with a prologue followed by three acts; having a chorus playing several roles; driving plotline at times through dance; using ariosa recitatives; and adopting similar allegorical themes such as boars.  Further, despite the fact that Purcell was already distinguished and his ouevre mature, the opera didn’t premiere at a grand venue but at a girls’ school, sometime in the late 1680s, though the exact date is not even known!  It was not produced again during his lifetime, and indeed, languished unnoticed for almost a century before its glorious and lasting revival.

Glaring weaknesses pervade the libretto.  Its brevity relative to its source material results in glossed-over, confused, or absent critical events.  The character of Aeneas is poorly developed.  And for those who dislike repetitious lyrics in opera, Purcell is the king of the repeat – as if you didn’t get it the first two times.  Yet this baroque gem among the earliest of operas has lived on because of its beguiling music, emotional power, and compact energy.

In the narrative, Dido, the widowed Queen of Carthage, hosts Aeneas after his escape from the fall of Troy.  Although Dido has pledged to never love again, she is unable to resist Aeneas.  However, an evil sorcerer intervenes with a plan to trick Aeneas into sailing to sea, leaving the forlorn Dido behind to die brokenhearted.

Nikola Printz, as the tormented Dido, offers a model fit with their rich, dark, and powerful mezzo instrument.  Their sound remains round and full even when supine or when being cast about by members of the chorus.  They also demonstrate outstanding control of vocal dynamics, amping and dampening with exceptional control of gradations.  And they rise to the occasion at the conclusion, with a poignant rendering of Dido’s glorious lament “When I am laid in earth.”

Although Aeneas is clearly more important in ancient mythology, Purcell gives him short shrift with less stage time and no signature aria.  Baritone Efraín Solís gives a steady performance with passion when needed and a solid voice, in his rare solo, the recitative “Jove’s commands shall be obeyed.”  As is often the case, the bad guy gets the juicy part, and it is the Sorcerer, portrayed by Nathan Stark who enlivens the action.  Appearing and acting very much the menacing figure intended, his fearsome intimidation extends to his deep, thunderous, chesty vocals. Acknowledgement is also due Maya Kherani as Belinda and Erin Alford as the otherwise unnamed Second Woman.

Purcell was a master of choral works, and much of the score resonates with impressions of sacred music.  The chorus is active throughout and is assigned meaningful and vocally rich highlights such as “Cupid only throws the dart,” and the conclusion, “With drooping wings,” all of which the youthful chorus handles with great competence.

If the libretto is full of jump cuts, the score of “Dido and Aeneas” offers greater continuity and beauty starting with the inviting overture.  The music, ably conducted by Music Director Joseph Marcheso, is characteristically Baroque, but in a distinctive British fashion.  As it is written for a string orchestra, the sound is warm and mellow.  And while there is a harpsichord, we don’t hear (the annoying to some) repeated tinkling riffs to end numerous tracts in the score.

“Dido and Aeneas,” composed by Henry Purcell with libretto by Nathan Tate, based on Tate’s play “Brutus of Alba” and Virgil’s “Aeneid,” is produced by Opera San José and plays at California Theatre, 345 South First St., San Jose, CA through November 28, 2021.