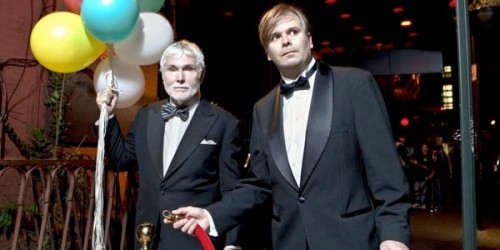 The second annual Rob Pruitt Art Awards will get the red carpet treatment.

The Solomon R. Guggenheim Museum announces the nominees for Rob Pruitt’s 2010 Art Awards, the second annual celebration honoring the notable individuals, exhibitions, and projects that have made a significant contribution to the field of contemporary art during the past year. Awards in 14 categories will be presented at a fundraising event to benefit the Guggenheim Foundation and visual arts non-profit White Columns on Wednesday, December 8, 2010, at the nightclub and music venue Webster Hall.

Artist Rob Pruitt, whose conceptual practice is rooted in a pop sensibility and a playful critique of art world structures, conceived the event as a performance-based artwork which follows the format of a Hollywood awards ceremony.  Designed by Pruitt with a flourish of showbiz glamour, the Art Awards harnesses the energy and accomplishments of the international arts community while simultaneously supporting two of its institutions.

Pruitt has invited writer, editor, and downtown fixture Glenn O’Brien to preside over the event as the Master of Ceremonies.  Pruitt and O’Brien, along with writers David Colman and Linda Yablonsky, are penning the event script. A distinguished cast of presenters will participate in distributing award statuettes designed by Pruitt, including Bill Powers, Jeanne Greenberg Rohatyn, and Jerry Saltz of the television series Work of Art, who will announce “New Artist of the Year”; Mary Heilmann, the 2009 “Artist of the Year,” who will announce the winner in that category; artist Marina Abramovic with Klaus Biesenbach, Director of MoMA PS1; artists John Currin and Rachel Feinstein; Richard Armstrong, Director, Solomon R. Guggenheim Foundation and Museum; and Matthew Higgs, Director, White Columns, among others.

The evening will also feature performances by artists Martin Creed and Kalup Linzy, and surprise guest appearances. The commissioned Art Awards theme song and other original music are composed by Matthew Friedberger and His Orchestra, who will play at the event. Tribute films created by Yorgo Alexopoulos will be screened as part of the ceremony. Dinner will be provided by Roberta’s, of Bushwick, Brooklyn. An after-party following the presentation will feature music by Rub-N-Tug.
Lifetime Achievement Awards, determined by Rob Pruitt along with organizing partners the Solomon R. Guggenheim Museum and White Columns, will be awarded to Jonas Mekas and Martha Rosler. The Artist-Educator Achievement Award, a new distinction added for this year’s celebration, will be presented to Marilyn Minter.

A group of more than 1,000 artists and arts professionals were invited to form an anonymous Art Awards Council to nominate and then vote upon four nominees in categories that focus primarily on exhibitions and projects that took place over the past year (July 2009 to July 2010), in the United States, as well as one category recognizing an international exhibition. The Rob Pruitt Award is being decided solely by the artist. The winners in each of the twelve categories—in addition to the three Achievement Awards—will be announced at the live awards ceremony on December 8 at Webster Hall.
The nominees for each category are:

The Rob Pruitt Award
To be announced the evening of December 8, 2010

Proceeds from the 2010 Art Awards will benefit the Solomon R. Guggenheim Foundation and White Columns. Please visit guggenheim.org/artawards for information on ticket sales, event updates, and an overview of the inaugural Art Awards. Video highlights from the ceremony will be posted on the Guggenheim’s website after the event.