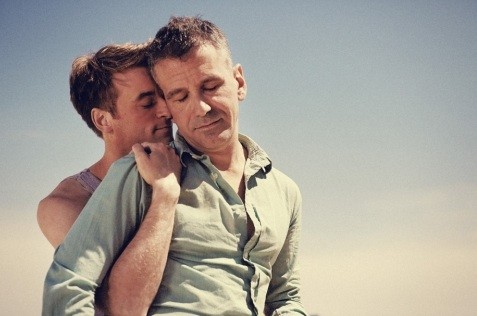 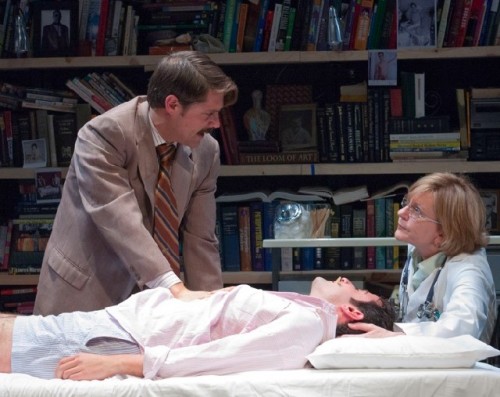 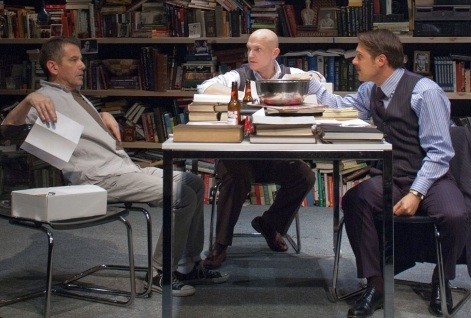 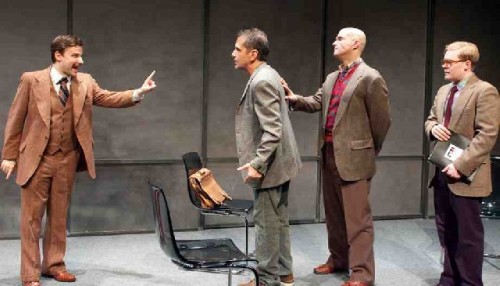 The Mayor’s Office Says No.

The Timeline Theatre production of The Normal Heart at 773 Theatre in Chicago is introduced like other productions of this company.  As we sit waiting for the play to begin we are encompassed by the period in which the play is set.  On a series of screens, which will later open and close to change scenes, there are projections of New York in the early 1980s. The twin towers of the World Trade Center stand proud.  Later we are in Studio 54 with whirling lights and timely music. However, the almost innocent tone is wrapped in darkness.

Among gay men in the city, a plague had erupted. The love whose name cannot be spoken is turning into a death sentence.  In the medical profession, few doctors and researchers will turn their attention to this epidemic.  Politicians shy away, particularly the Mayor of New York who is in the closet.

A Jewish activist who had been raised in a home where you had to charge out and correct every wrong was at first dismayed by the inaction of the gay, medical and political communities.  His dismay turns to anger, fury and then rage. His compatriot, a physician played by Mary Beth Fisher, has an almost demure demeanor until the shattering silence around her in the face of death makes her erupt.

In the history of movements, we know that unless a strident voice cuts through silence, embarrassment and downright dislike, change seldom happens. Willful blindness is the human condition.

While many people have come to accept gays and their culture, three decades ago gays were outsiders.  In coming out you risked life and limb.

AIDs appeared to be a sexually transmitted disease.  Gays were alleged to be promiscuous.  While men in general are biologically programmed to spread their seed widely, in the heterosexual community, they often give up this biological imperative out of love for a woman partner, who needs fidelity and protection.

A male couple at first did not appear to have these needs. Yet as time has passed, and pressures from the gay community have forced legal changes to permit marriage, it is clear that gay couples have the same wish for monogamy and are prepared to give up wandering eyes in the interest of a monogamous relationship.

At the time in which the play is set, gays were still looked upon as socially unacceptable and defective. Many men did not dare to come out at the risk of losing their wives and jobs.  Their fears were well founded.

In the hands of director Nick Bowling the play is not a polemic. Instead it is the exploration of character.  While the cast all play different stereotypes in the gay community, the actors create rounded characters, not caricatures. The central relationships are between Ned, the protagonist, a loud-voiced fighter and his brother, a successful lawyer. Ned is in love for the first time in his early mid-life with a New York Times reporter who can’t write about the news he sees in his own backyard. The Times finally ran an article on the ‘virus’ on page 41.  It was written by a closeted MD, who almost whispers with his pen.

Ned’s mouth is always full of words, but David Cromer delivers them with consideration and passion, forging a man who cares deeply. Patrick Andrews’ Felix is the most shaped performance, a man who emerges from a difficult life with an acceptance that allows humor and a light touch to dominate his darkest moments.  Ned and Felix’s sex scenes have been directed to show tenderness and love more than fierceness. Gentle touches and brushes make us yearn with them for a future.

Ben, Ned’s brother, is a stalwart aid in his life.  Both men have recovered from the same childhood, drawn here only as coming to cope with an activist Mom, who cared more about the problems of the Red Cross than those of her family, and a wilting Dad.

Ben can stand up for Ned, but embraces his alternate universe only at the end when he comes to know Ned’s dying partner.  Marc Grapey was able to suggest Big Law grappling with the politics of the real world in a style that conveyed professional propriety and also deep human concern.

Bruce heads up the first Gay Men’s organization. Once a Green Beret, he is now in charge of 2000 employees at Citibank and is also concerned about his 401K, his life insurance, to say nothing of his salary and his coop. Alex Weisman’s perplexed ‘why can’t we all get along role’ is done with great charm. That we all do now is a testament to men like Tommy in the play.

Mickey is a campy figure who has survived in the Koch administration. He is unable to unglue the powers that be to fund an information campaign. This role, brilliantly wrought by Stephen Rader, is the most treacherous in the play. Yet the character’s sissy fragility never teeters over into caricature.  Instead, and fluttering all the while, Stephen Rader etched a figure that could also look at problems straight on.

Drew Anderson stepped into multiple roles, the most complex as the Mayor’s aide, a gay man himself, who retains his dignity even as he is accused of betraying his kind.

The phrase ‘the normal heart’ comes from an Auden poem, in which the human heart craves not for universal love, but for love alone.  Ned comes to this in his love for Felix. But it is Felix who points out to Ned that he loves fighting and is good at it.  Without the fight, many battles would be lost before they even began.

I continue to be appalled that something as simple as conveying the life and death choices sexual encounters entailed in the gay community were so difficult to achieve.  Playwright Kramer is even-handed as he metes out blame. For the gay community, having bathhouse activity and bar pickups taken away seemed too cruel a fate.

In the outside community what did gays count for anyway?  Ned gives a marvelous speech in which he, as an author, stands in a long line of gay artists from Plato and Aristotle, to Leonardo and Michelangelo, to Proust and Henry James.

Universal love is what Ned and Ben’s mother sought. Ned finds his love alone as he wages a battle to be recognized as a gay man among gay men. He has a normal heart embedded in other normal hearts. Normal Heart is a wrenching but elucidating evening of theatre.

In the end says Auden, ‘we must love one another or die.’ One leaves the theatre after this evening feeling just that.