New Dutch and Flemish Galleries at the MFA

A Hundred Works by the Greatest Artists 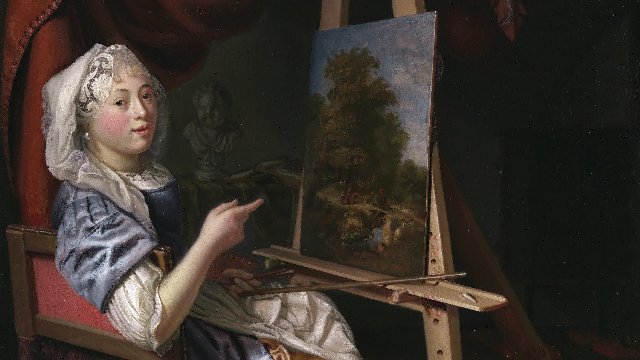 Self-Portrait of the Artist in Her Studio (detail), about 1680, Maria Schalcken. Gift of Rose-Marie and Eijk van Otterloo.

In the 17th century, global commerce fueled the economy of the Netherlands and Flanders and sparked an artistic boom. Merchants sailed from Amsterdam, Antwerp and other ports across seas and oceans, joining trade networks that stretched from Asia to the Americas and Africa. This unprecedented movement of goods, ideas and people, both free and enslaved, gave rise to what some have called the first age of globalization.

On November 20, 2021, the Museum of Fine Arts, Boston (MFA), opens a suite of seven newly renovated galleries that explore the rich visual culture of the Dutch Republic and Flanders during this time, bringing together nearly 100 paintings by the greatest masters—including Rembrandt van Rijn, Peter Paul Rubens, Gerrit Dou, Frans Hals and Anthony van Dyck—in addition to works on paper and decorative arts such as silver and Delft ceramics.

The new installations examine a variety of themes: women artists and patrons; the growth of the art market; and the unexpected connection between still life paintings, the sugar trade and slavery. Many of the featured paintings are drawn from a 2017 gift from Rose-Marie and Eijk van Otterloo and Susan and Matthew Weatherbie, which elevated the MFA’s holdings into one of the country’s foremost collections of Dutch art from the 17th century and significantly strengthened its representation of Flemish works from the period.

The installation features additional gifts and purchases, supplementing the 2017 gift: seven Dutch and Flemish pictures from the collections of Rose-Marie and Eijk van Otterloo, Maida and George Abrams and Kathleen and Martin Feldstein. Other highlights are a selection of Dutch medals from the Abrams Collection and a silver mounted coconut cup and a pair of silver tazze from the Van Otterloo Collection. The 2017 landmark donation also included endowment funds to establish the Center for Netherlandish Art (CNA), an innovative center for scholarship housed at the MFA and the first resource of its kind in the U.S. The CNA will launch in conjunction with the new galleries.

“The newly installed galleries combine existing and new collections and link historical context to issues of our time. The complicated power dynamics of international trade, the creation of art markets, the evolution of domestic space defined by class— all are addressed in narrative groupings of works that celebrate many known and unknown artists,” said Matthew Teitelbaum, Ann and Graham Gund Director. “The role of the museum is to re-evaluate accepted storylines and traditions—affirming while broadening, challenging and deepening our assumptions about the past. We do so by acknowledging both the power and beauty of great works of art, and affirming sustaining value in the work of Rembrandt, Hals and Rubens alongside discoveries like Wautier, Schalcken and Ruysch. The presentation is the result of collaboration among scholars, artists and cultural thinkers both within and outside the Museum, who came together to share ideas and create new meaning.”

When the galleries open, an installation in the MFA’s Upper Hemicycle will feature five paintings by Michaelina Wautier (1604–1689)—making their public debut after 370 years. The rare series, titled The Five Senses (1650, Rose-Marie and Eijk van Otterloo Collection), constitutes five of the only 40 or so known works by Wautier, an artist from Brussels who until recently had been omitted from art history. Rather than depicting the senses as experienced by idealized women, the detailed portrayals of Sight, Sound, Hearing, Taste and Touch focus on boys performing everyday activities. One of the great mysteries in the study of Flemish art has been the whereabouts of this set, which resurfaced in 2020 and showcases Wautier’s innovative conception, complex choreography of glances and gestures, and ability to convey different textures.

Arguably the greatest early Netherlandish painting in North America, Saint Luke Drawing the Virgin (about 1435–40) by Rogier van der Weyden (about 1400–1464) introduces the “Dutch Specialties” gallery and provides a conceptual starting point for the rest of the suite. Many of the genres that Dutch artists would become famous for exploring in the 17th century are drawn from elements in sacred paintings by Van der Weyden and his 15th-century contemporaries. The gallery delves into these genres: artists in their studios, flower still lifes, architectural painting, portraits and head studies (called “tronies” in Dutch), and painstaking depictions of textures. The paintings include major works by Rembrandt van Rijn (1606–1669), Pieter Saenredam (1597–1665) and Balthasar van der Ast (1593 or 1594–1657) as well as two works that will be the first paintings by early modern Dutch women to enter the MFA’s collection. Self-Portrait of the Artist in Her Studio (about 1680) by Maria Schalcken (1645/50–before 1700) was previously attributed to her brother and teacher Godfried Schalcken, but conservation treatment revealed Maria’s signature in the upper left corner—and thus established the painting, a Van Otterloo gift, as a self-portrait. Still Life with Flowers (1709) is an exquisite example by Rachel Ruysch (1664–1750), the daughter of a well-known professor of botany and anatomy, who is now ranked among the leading Dutch still life painters.

A new rotating gallery in the suite will be dedicated to presenting research developed at the CNA. The inaugural presentation analyzes the competitiveness of the Dutch art market in the 17th century, with displays created in collaboration with professors and graduate students from the Experience Design Lab and the Co-Lab for Data Impact at Northeastern University. The gallery explores how painters developed instantly recognizable styles and motifs to adapt to the demands of the market. Willem Claesz. Heda (1594–1680), for example, created a new brand of monochrome still life, while Jacob van Ruisdael (1628 or 1629–1682) specialized in sweeping views of Haarlem. By contrast, Jan van Goyen (1596–1656) used cheaper pigments and faster working methods to offer his depictions of the Dutch countryside at competitive prices.

In the decades around 1600, the Dutch mastered the ocean; their world-spanning routes linked ports in Europe, Africa, Asia and the Americas. Burgeoning trade with Asia was managed by the Dutch East India company (or VOC from its Dutch name), founded in 1602, the world’s first multinational cooperation. On view in the “Global Commerce” gallery, seascapes by artists including Willem van de Velde, the Younger (1633–1707) and Ludolf Bakhuizen (1631–1708) celebrate the Dutch Republic’s seafaring prowess, and atlases by Joan Blaeu (1596–1673) outline the vast trade networks from the North Sea to the Indian Ocean and the Sea of Japan. Still lifes by artists including Willem Kalf (1619–1693) and Frans Snyders (1579–1657) showcase a variety of local and imported commodities, including precious glassware produced in Antwerp and blue-and-white porcelain from China. A major theme is the darker history of international trade, highlighted with a special emphasis on sugar. Sugar production in Brazil depended on the work of large numbers of enslaved laborers, and the juxtaposition of still lifes containing sweets by Osias Beert (about 1580–1623), a Brazilian landscape by Frans Post (1612-1680), and a map of Brazil with a sugar mill in Blaeu’s atlas will explore the often-overlooked connection between sugar consumption, plantation labor and slavery. One extraordinary object sums up the cosmopolitan taste of Amsterdam artists and patrons: a coconut turned into a sea monster battling Neptune, through its elaborate silver mount. This fanciful work of art was made in 1607 by Frederiks Andries (1566-1627) and donated by Rose-Marie and Eijk van Otterloo in 2020.

The Eighty Years’ War (1568–1648) split the Netherlands into an independent, largely Protestant Dutch Republic in the north and a Catholic Southern Netherlands ruled by Spain. Divergent artistic styles emerged in the two regions. A grand gallery, the largest one in the suite, is dedicated to “Dutch and Flemish Masterpieces,” presenting many of the greatest treasures in the MFA from both cultures. Among the many highlights are Self-Portrait as Icarus with Daedalus (about 1618) painted by a 19-year-old Anthony van Dyck (1599–1641), Mulay Ahmad (about 1609) by Peter Paul Rubens (1577–1640) and three great portraits by Rembrandt, including the moving Aeltje Uylenburgh (1632). A section of this gallery has been transformed into an immersive installation that evokes an Amsterdam house in the second half of the 17th-century, teeming with exquisite paintings, silver, furniture and Delft ceramics. A doll’s house filled with nearly 200 silver and porcelain miniatures as well as an elaborately carved beeldenkast (cupboard), both on loan from the Rose-Marie and Eijk van Otterloo Collection, are the focal points of this intimate space.

Measuring nearly 10 by 15 feet, The Triumph of the Winter Queen: Allegory of the Just (1636) by Gerrit van Honthorst (1590–1656) is the focus of the “Creativity in Exile” gallery. Part allegory and part family portrait, the monumental painting was commissioned by Elizabeth Stuart, formerly Queen of Bohemia (nicknamed the “Winter Queen” for her short reign), long after she was exiled to the Netherlands in 1621. The gallery also displays ceramics donated to the MFA by Fritz and Rita Markus, who had to abandon and then rebuild their collection after fleeing persecution in the Netherlands during World War II. Though separated by more than 300 years—and by different mediums—these ceramics and Honthorst’s masterpiece are linked by the creative impulse and by perseverance in the face of loss.

Throughout the galleries, newly produced videos provide additional context on specific topics or works of art. These include insights from Boston-based artist Eben Haines on Rembrandt’s Artist in his Studio (about 1628); Courtney Harris, the MFA’s Assistant Curator, Decorative Arts and Sculpture, Art of Europe, on the Dutch doll’s house; Nasser Rabbat, Aga Khan Professor of Islamic Architecture at Massachusetts Institute of Technology, on Rubens’ Mulay Ahmad (about 1609); and Mary Hicks, Assistant Professor of History at the University of Chicago, with Antien Knaap, the MFA’s Assistant Curator of Paintings, Art of Europe, on the connections between the sugar trade and slavery in the 17th century.

In celebration of the galleries’ opening on November 20, chamber players from Handel and Haydn Society and soprano Sonja DuToit Tengblad have recorded a concert, available on H+H’s website, that paints a harmonic portrait of 17th-century Netherlands, with Honthorst’s Triumph of the Winter Queen serving as a spectacular backdrop. The concert features music by composers both well-loved and little-known, performed on contemporaneous instruments from the MFA’s collection.