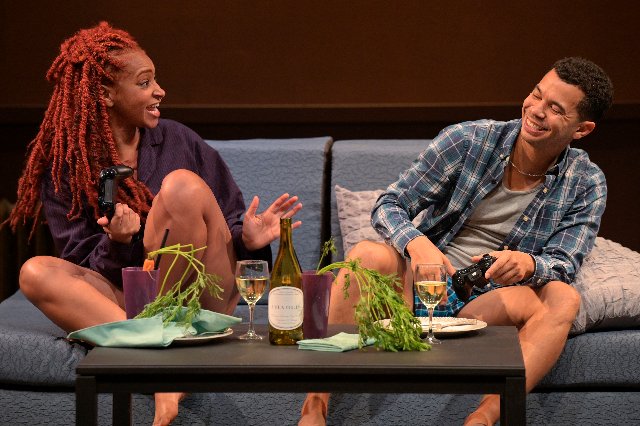 Nature or nurture?  This question has been raised for centuries.  Which is the greater determinant of intelligence and personality?

The storyline of “Father/Daughter” derives from the biological relationship of Baldwin, a high-school chemistry teacher, and his daughter, Miranda.    It is comprised of a sequence of many vignettes, but a scene between those two occurs only at the end.  The main action alternates between brief interludes of two couples.  In one set, Baldwin and Risa are courting, while the eight-year-old Miranda, a product of Baldwin’s failed marriage, is unseen.  The other set involves Miranda as a young adult, and her romance with Louis.

The Bay Area is blessed with many great performing artists, and Sam Jackson (for the sake of clarity – she!) and William Thomas Hodgson (he) are among the finest.  Jackson portrays both females, and Hodgson both males.  And both actors are scintillating. The same descriptors apply to each performer and their performances – attractive and charismatic; confident in their actions; possessing easy charm; able to extract humorous response almost effortlessly; and displaying a full range of emotions.  What’s more, the chemistry between them pops.  Watching them act is a real pleasure.

The anecdotes pretty much encompass the life cycles of two romantic relationships, occurring a generation apart. Some are funny, some are sad.  They are full of insight and are individually well constructed and entertaining.  Early on, we witness two different dating rituals, with the clumsy Baldwin and Louis berated respectively by the assertive Risa and Miranda.  Somewhat akin to trying to find the right lines in today’s evolving political correctness, the men never seem to say or do quite the right thing, and the women let them know it.  But despite the men’s ineptness and the women’s combativeness, each couple will have a roll in the hay and proceed to a serious relationship.  Later, each couple deals with hard issues like a serious problem that Baldwin faces with Miranda as daughter, and Miranda as woman getting pregnant.

In one funny scene involving the younger couple, Louis is on the brink of asking Baldwin for Miranda’s hand.  Louis tells Miranda that her dad talked with him about how on the outside, opposites attract, but on the inside, likes attract.  Louis took this figuratively and responded with “Yes.  We’re very different, but we both love your daughter.”  Horrified that her father was not ready to hear about that topic Miranda responds “Oh, no.  He wasn’t talking about love.  He was talking about chemical bonds!”

“Father/Daughter” covers a lot of ground leading to the question of whether, fundamentally, Miranda is her father’s daughter.  Although she hasn’t grown up in the same household with him, has she acquired similar disposition through genetics or osmosis?  Is she doomed to make his same mistakes?  But beyond trait-based linkages, does her limited relationship with her father inform her attitude toward her boyfriend, or does her feeling toward her boyfriend influence her feeling toward her father?  This line of inquiry deviates from the more common same-gender assessment, as in the injunction that if you want to know what a young woman will be like in later years, look at her mother.

Many new plays undergo revisions after their premiere, and while this one has a strong core that should attract future audiences, it might need revision to do so.  Authors and directors can sometimes be so close to their own work that they often don’t see that other observers don’t see.  In this case, they expect too much from their audience.  This reviewer read everything about the play in the program and on the Aurora website but still struggled to recognize some shifts between couples.  In talking with five other serious theater goers afterward, each of them was at least moderately confused about identities and relationships.  One who likes surprise and avoids advance publicity about plays was totally lost as were others who didn’t get what was going on.

The ages, ethnicities, social class, and such between the characters that each actor plays varies so little that there is not much they can do to differentiate their roles with affect alone.  Supertitles for each scene, however, would elucidate effectively, by designating, for instance, “Baldwin and Risa 1992.”  Otherwise, extensive use of character names in the script at the beginning of each scene would help.  Changing clothes came to be generally associated with change in characters in the play, but some dressing or changing occurs within roles to somewhat nullify that insight.  Truly distinctive wardrobe differentiation would help.

Some confusion might be attributable to having two actors playing four parts, and it is not clear whether that is specified by the playwright or the producer.  While it would be interesting to see a four-actor version in contrast to this one, the unbroken tour de force acting by a twosome like this would be splintered.  Also, an unspoken but the palpable link demonstrated by the two roles that Hodgson plays as father and lover would be severed.  By nature, do humans seek spouses that are reminiscent of their opposite gender parent?

Director M. Graham Smith keeps the action moving, but at one hour and forty-five minutes, the play exceeds some viewers’ tolerance for a two-hander, especially without intermission.

“Father/Daughter,” a world premiere, written by Kait Kerrigan, is produced by Aurora Theatre, and plays on their stage at 2081 Addison St., Berkeley, CA through December 12, 2021.