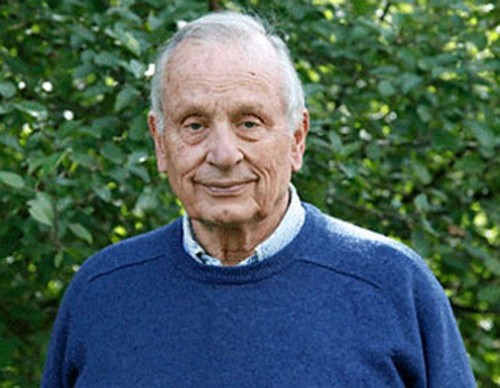 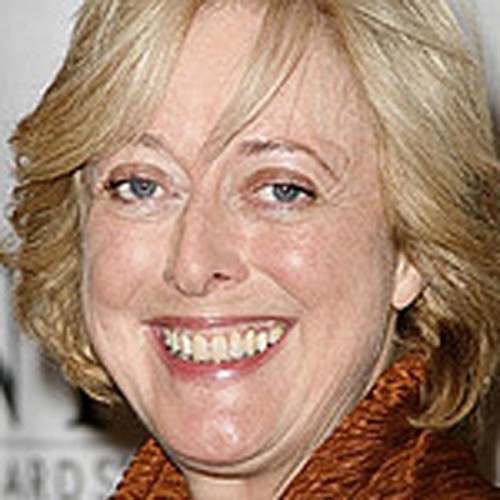 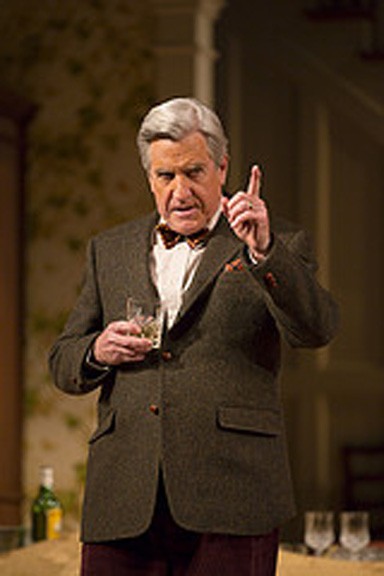 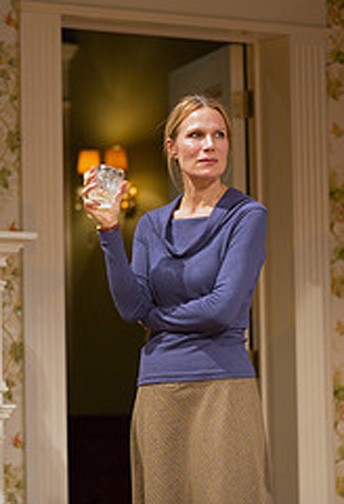 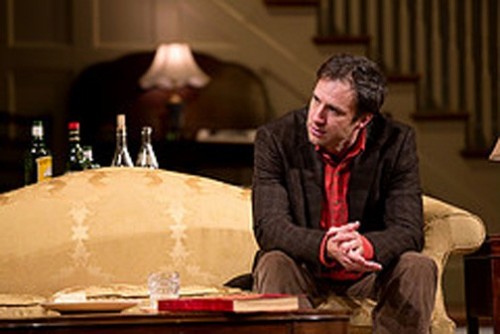 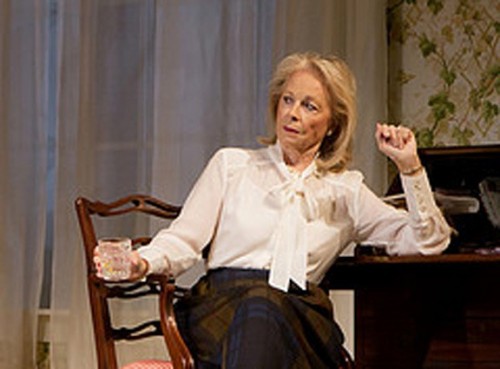 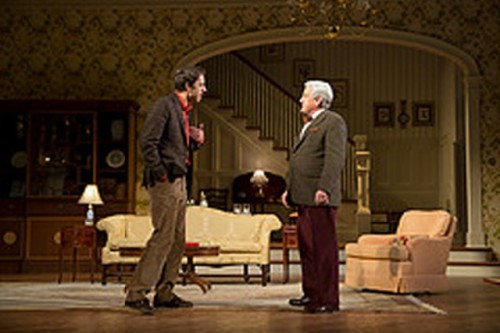 James Waterson and Richard Poe in The Cocktail Hour by A.R. Gurney

Bad memories and bad manners transcend class, race and wealth. Using humor and wit intersecting with family foibles and wounds, A.R. Gurney's The Cocktail Hour focuses on the playwright's personal family dilemma as a member of an upper middle class WASP family in a wealthy suburb of Buffalo, NY. Here the cocktail hour was a family ritual but not a  warm family embrace. The time is the 1970s.

On a rare visit home alone from New York City, Gurney/John sets the tone with a seemingly benign conversation between son and his overbearing, self-righteous father played by Richard Poe. Son John, is played by James Waterson as a "Yes, Pop" initially too easy to agree soul. However, things are not what they seem.

Maureen Anderman's matriarch Ann enters midway through the first act as a paragon of self-satisfied well kept female maturity. She is followed by daughter Nina who enters less sanguine than her parents but more confident than her brother. She is slightly troubled with seemingly trivial personal issues but important to her aspirations.

Tension and a bit of anger underscore the dialogue. In many ways, this is a play of loss and delusion. The family facade can be very thin structured by only manners that can hide feelings. Feelings in turn can be suppressed by words spoken and left unspoken. Clever phrasing disguises personal angst.

Gurney's wit is like a dry martini, stirred not shaken. Whenever there seems to be a conflict, it is time for another drink. Throughout the play, there are libations over personal liabilities and jokes over explanations. Yet, at times there is a wistfulness to the narrative, a poignancy in purpose.

Playwright Gurney uses his own background to describe the difficulty of being children born to privilege who want to express themselves individually without approval of their parents. There is a universality to this creative dilemma in all classes and financial situations. What is the right thing to do? Do we always need parental approval?

The dramatic predicament of the play is whether or not John should get his play produced about his notion of the family. Father and mother Bradley and Ann reject the notion out of hand without even reading his working script. John sees this as part of rejection and isolation by his parents. He has always been the outsider, the child not embraced. Is John just a troublemaker or only just troubled?

The narrative has John wrestling with his familial demons. Verbally he begins to joust with his parents and sister as well as with a phoned in but unseen favored brother. Historically, meals are never on time as cocktail hours always seem to spoil the rhythm of dining. Pater Bradley never wants the rhythm of the conversation to be disturbed. And Ann always wants just one more splash.

Punctuating the story are the forever interchangeable cooks and servants who both serve and underserve the family. In a way, these unseen individuals represent aspects to the disfunctional nature of the family as well.

Tempering WASP polish with grace, Maureen Anderman's Ann is superb. She is a rock in her husband's verbal stream. Pamela J. Gray's Nina establishes a woman finding herself and making her a person of meaningful purpose. She is the steadfast daughter who yearns for approval and more.

On the other hand, James Waterson is limited by the reticence, even callowness, of how the playwright has drawn John. However, Waterson portrays the inner struggle of the artist looking for approval from parents who constitutionally are not able to bless him or his work. John's continued "Yes, Pop" are sequences of small fireworks that explode within conversations with his father.

Perhaps the richest potential character is the father, Bradley. But Richard Poe's Bradley is bombastic without being balanced. He chews the scenery, not in a good way, but in a way that underscores only egotism not flawed humanity. There is no country club modulation in his portrayal just know it all pomposity. However, he does have nice hair.

There is only one set in the play, the to the manor lived elegant but dated interior of the family home. From patterned wallpaper, to carved moldings, to baby grand piano, to Wedgewood lamps, set designer Allen Moyer has evocatively portrayed the traditional taste of a wealthy family. The tall staircase almost acts as a character itself. Costume designer Candace Donnelly has dressed the characters very well to reflect late 70s clothing.

Director Aiken has choreographed the characters in such a way as to make believable their movements and gestures. She has deftly portrayed this family in a time not so long ago that certainly is not of our time but in our memory.

First presented in 1988, A.R. Gurney wrote The Cocktail Hour as an homage to his own personal history. He has scratched old familial scabs, but not too deeply. For the playwright, this play is a painful labor of recognition and acceptance. It is clever, witty and a bit sad.

The Cocktail Hour is a play with plenty of drink and food for thought.