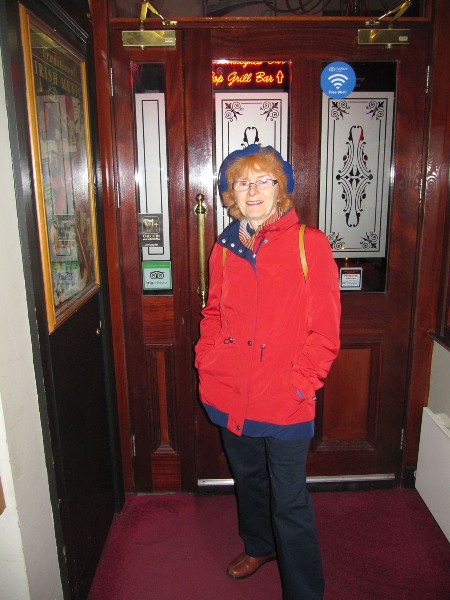 Astrid enterning Parnell’s during our first night in Dublin. 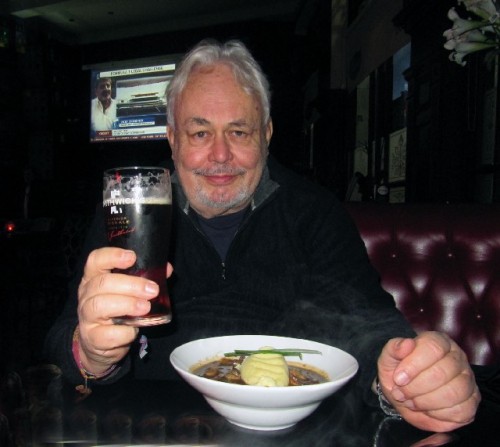 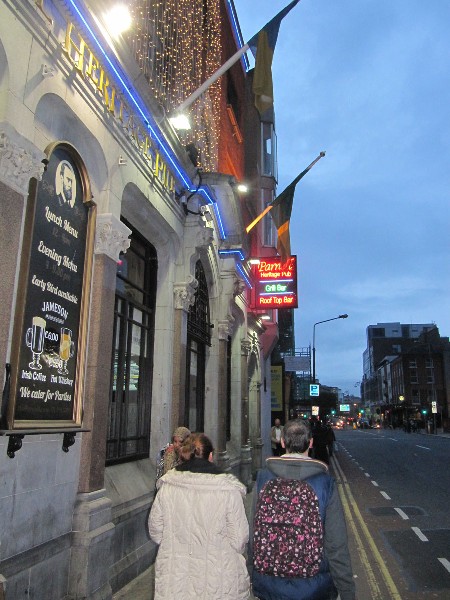 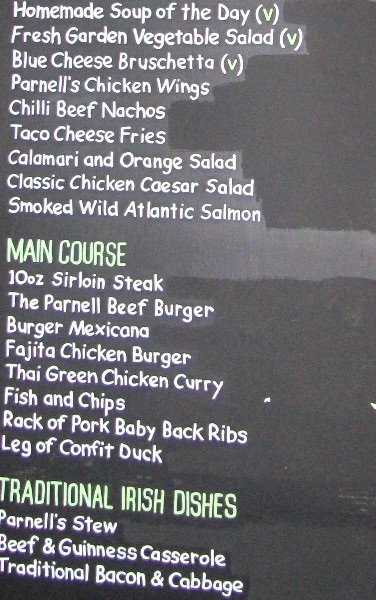 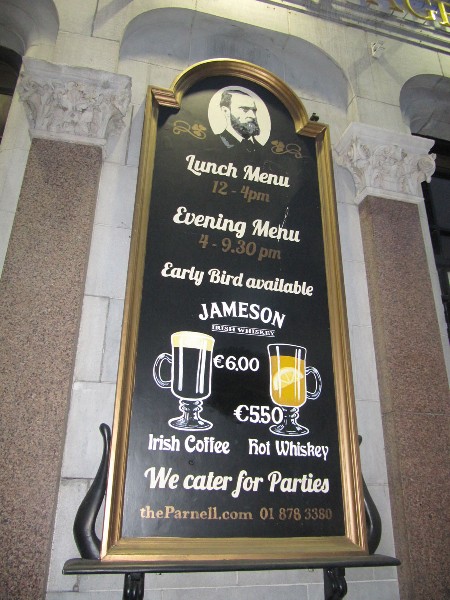 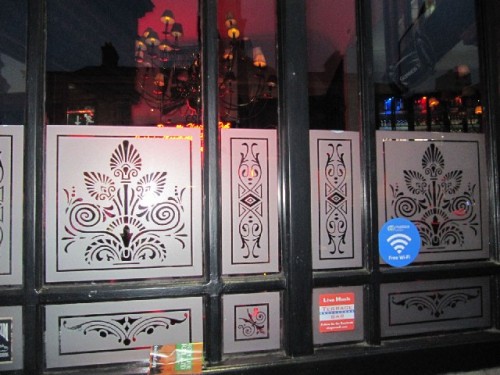 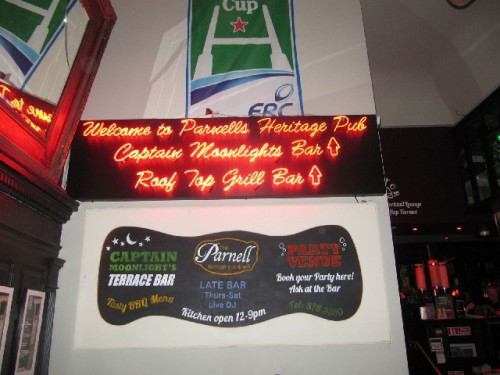 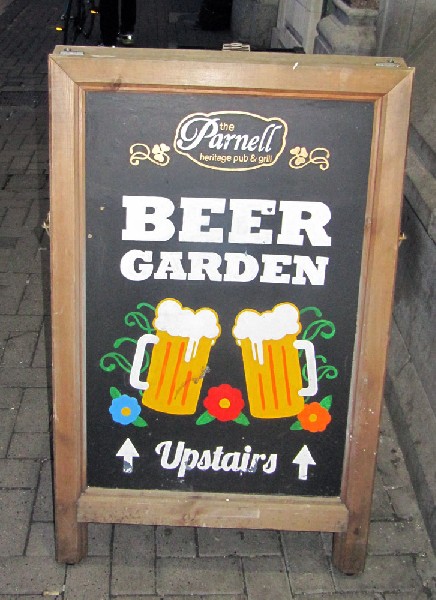 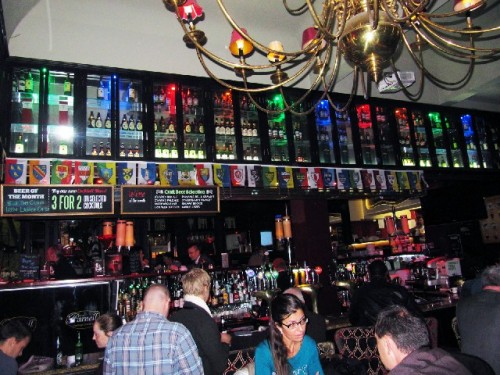 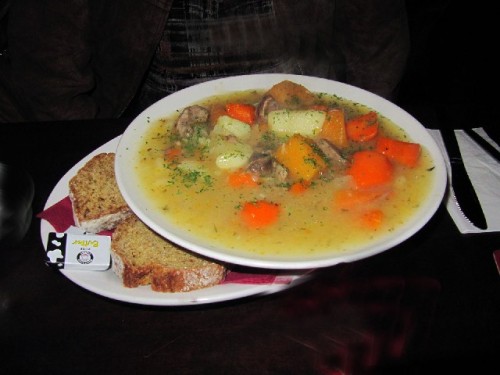 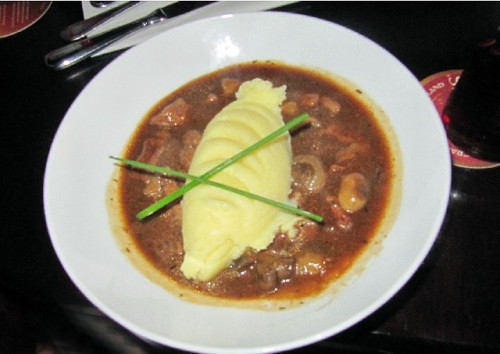 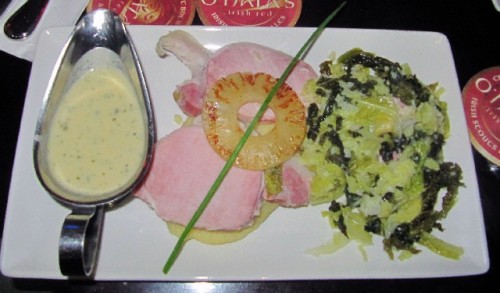 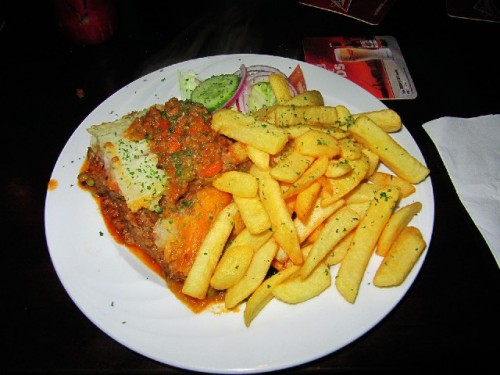 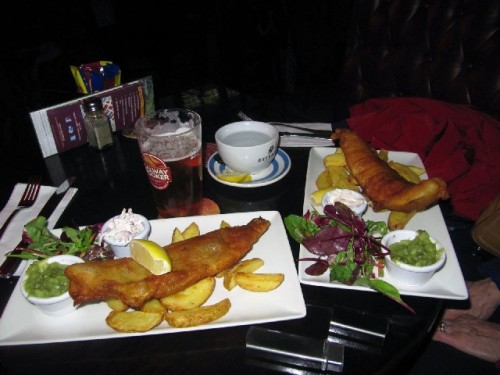 Fish and chips were nothing special. 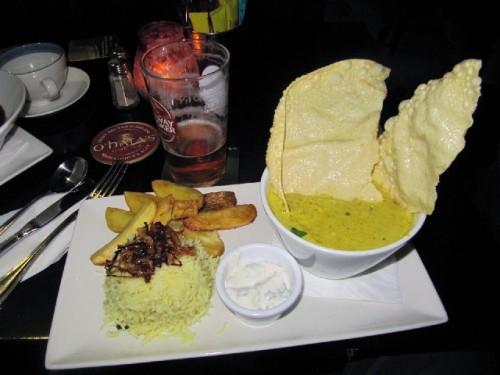 The Thai Green Curry was a pleasant surprise. 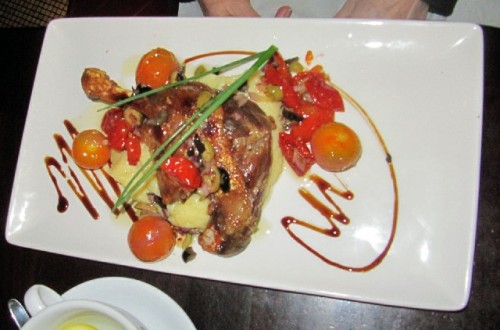 Duck confit with a flair. 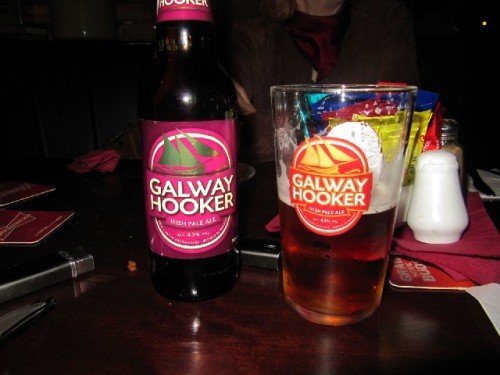 The blonde Galway Hooker turned out to be an ale. 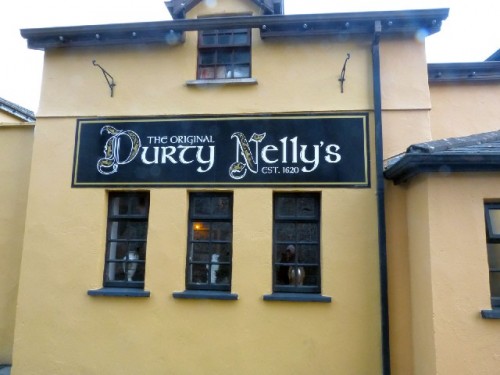 Durty Nelly next to Bunratty Castle. 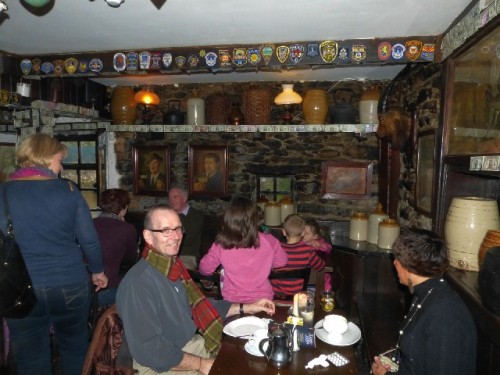 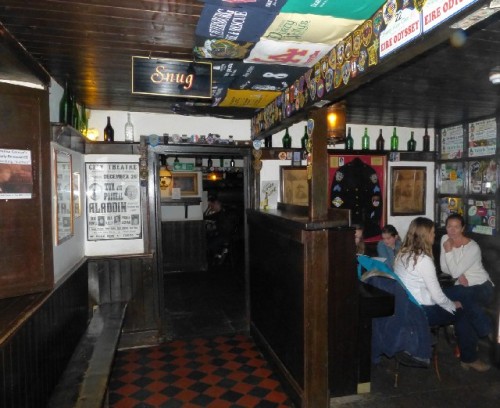 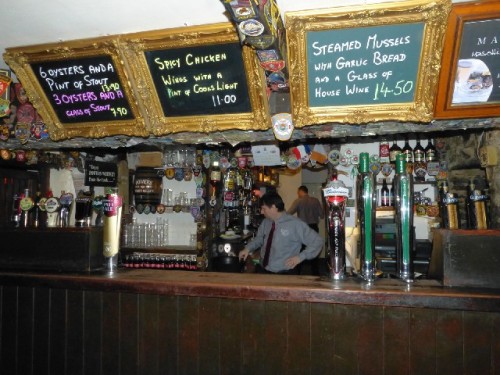 Offering food and drink for centuries.

The favorite meal of my Irish mother, after lobster and fried clams, was a corned beef and cabbage boiled dinner.

It’s fun to make on Saint Patrick’s Day. Which is to say once or twice a year.

Sadly confirmed when we were invited to dine with relatives.

Even the children of my Aunt Rita said that she was a terrible cook.

Her daughter grew up learning to make reservations.

Now and then my great aunt Catherine would make “a lovely dinner.”

You endured the meal and waited for dessert.

She made awesome apple pie.

It was with some trepidation that we dined in Dublin pubs.

Our hotel served traditional Irish Breakfast and then some.

A cup of soup or salad was all we needed for lunch.

By afternoon you have a powerful thirst for a pint.

Within walking distance of the hotel the pub Parnell’s was recommended.

Exhausted from a day of travel we were warmly greeted by a charming young man with a lilting, poetic manner of speech. Never have I felt more welcome.

He swept us to a booth and answered questions about the traditional dishes on the menu. Everything sounded quite wonderful and after one meal Parnell’s became our favorite destination although we tried other options. In Cork, for instance, during an overnight trip we stayed near the hotel and tried an award wining upscale restaurant.

Parnell’s was a rather large place with several options for those more in the mood to just party and drink.

The kitchen at Parnell’s was particularly inspired.

That first night we opted for stew. Astrid had Parnell’s Stew (with lamb) and mine was described as a “ Beef Guinness Cassarole.”

That meant a beef stew with Guinness added for flavor and mashed potato on top.

Back home we tried to replicate the recipe. Astrid browned the meat which was then boiled. Later she added carrots and celery. I insisted on the bottle of Guinness. Astrid likes to boil potato separately. I suggested mashed as it was served in the pub. She changed to sweet potato but I think the regular mashed works better.

Our home made stew was wonderful and got better with each reheating. For me the Guinness made a world of difference.

On another night I opted for Traditional Bacon and Cabbage while she ordered a confit of duck.

The bacon proved to be more like slices of ham with a grilled ring of pineapple on top.

Cabbage was a chopped medley on the side. The dish was served with a side of white gravy with parsley.

Knocking about to different restaurants we had fish and chips. It was nothing that you can’t get at home and we should have been more adventurous.

Just for kicks one evening before a movie we opted for a Chinese Buffet. Some Asian guests at the hotel asked for directions to Chinatown. There really isn’t one but there were a number of Oriental dining options on and off the main drag.

We visited a pub noted for its live traditional band. Lots of pubs offer entertainment. You learned there are pubs best to eat and drink, just drink, or rock the night away. We tried to touch on all of them.

During a bus trip we stopped for just a half hour to visit Bunratty Castle, the most complete and authentic medieval fortress in Ireland. Built in 1425 it was restored in 1954 to its former medieval splendor and now contains mainly 15th and 16th century furnishings, tapestries, and works of art which capture the mood of those times.

Having crawled all through the grim Blarney Castle and kissed the bleeping stone (more on that later) I wasn’t up for exploring another friggin’ dump.

Instead I camped meself next door to said castle in Ireland’s oldest pub. Durty Nelly’s was established in 1620.

Little wonder that if you lived in one of those damp dungeons they call castles you would be hankering for a few pints come sundown. The locals have been staggering in for centuries to ease the bloody damp misery.

The rooms were ancient and cozy. It was where one could spend a few days if not a lifetime.

But with just time for a spot of tea it was back on the bus.

Of course on our last night in Dublin it was back to Parnell’s for a pint.

After a week of Guinness (which was incredibly smooth and creamy just steps from the brewery) I inquired about ale.

Apparently, that’s the wrong question in Dublin. They make a red ale which I hate or try to foist an IPA on you which I just loathe. The patient waitress, not having a clue what I was blithering on about, talked me into a Galway Hooker.

I said that in the States hooker means something other than beer.

She laughed and with a blush said “Here too.”

This time I opted for the Thai Green Curry. It was a wonderful surprise.

Here’s to you. And may the saints preserve us.