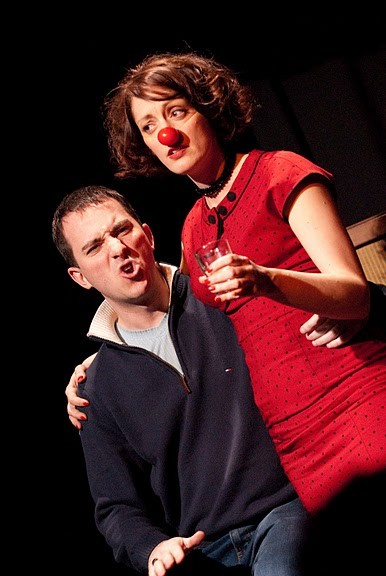 Rebecca Northan clowning around with her Blind Date. 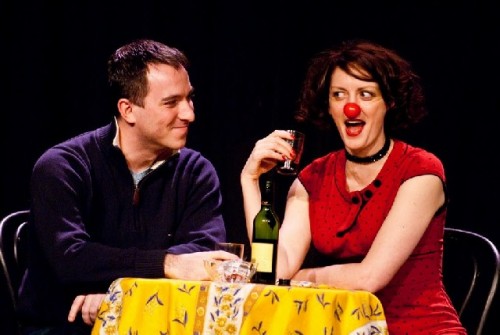 “A flight of theatrical fancy that is absolutely magical,” Richard Ouzounian, The Toronto Star

Direct from a critically-acclaimed, sold-out engagement in Toronto comes the new comedy BLIND DATE –  which Richard Ouzounian of the Toronto Star called “a flight of theatrical fancy” and Now Magazine labeled “the perfect marriage of theatre and comedy” – being given its U.S. premiere Off-Broadway with previews beginning December 2 prior to the official press opening on December 6 at the Ars Nova building (511 West 54 Street)  Created by and starring Rebecca Northan, BLIND DATE is presented by Tony Award-winning producer Kevin McCollum.

There’s nothing like the thrill of a first date...anything can happen! In the new play BLIND DATE, Mimi (Ms. Northan) – a Parisian temptress – goes on a blind date with a different man each and every night – in fact; Mimi’s BLIND DATE is selected directly from the audience. Hilarious and touching, BLIND DATE takes the audience – and Mimi and her date – through the unforgettable stages of romance, from courtship to commitment, all in 90 minutes.

The critical response to BLIND DATE when it opened at World Stage at Toronto’s Harbourfront Centre was most enthusiastic – Now Magazine called BLIND DATE “the perfect marriage of theatre and comedy.” The Calgary Sun called it, “A must-see performance…the theatrical equivalent of walking a tightrope,” and Paula Citron or 93.6FM (The New Classical) said, “I shrieked with laughter…this show is a don’t miss, even if you’ve seen it before.”

Rebecca Northan is a Canadian actor, improviser, theatre director, and creative artist. She is known for playing the hippie mother Diane Macleod on the CTV & Comedy Network sitcom “Alice, I Think.” Other credits include: Comedy Network’s “The Joe Blow Show (Gemini Award nominee); the films THE ROCKER (opposite Jane Lynch & Christina Applegate) and MR. MAGORIUM’S WONDER EMPORIUM (opposite Dustin Hoffman & Natalie Portman). Northan has worked in theatres across Canada. Other credits include guest host on CBC’s “This Hour Has 22 Minutes,” and a series lead in Michael Douse’s “The Foundation” on Showcase. Northan is an alumna of Second City Mainstage in Toronto, as well as the Loose Moose Theatre Company where she did her improv training with world famous improvisational theatre teacher Keith Johnstone.

Kevin McCollum is the winner of three Tony Awards for Best Musical: “Rent” (which also won the Pulitzer Prize for Drama), AVENUE Q and IN THE HEIGHTS. Also on Broadway, he produced the current revival of WEST SIDE STORY, HIGH FIDELITY, Baz Luhrmann’s production of “LA BOHEME,” and the up-coming Broadway production of Rajiv Joseph’s BENGAL TIGER AT THE BAGHDAD ZOO starring Robin Williams.

Scheduled December 2 through December 20 at the Ars Nova building (511 West 54th Street) with a performance schedule of Mondays at 8pm, Thursday – Fridays at 8pm, Saturdays at 7pm & 10pm, and Sundays at 7pm. General admission tickets for BLIND DATE are $40 and can be reserved through OvationTix by calling 866-811-4111, or by visiting the BLIND DATE website at www.BlindDateNYC.com

Additionally, there will be a $20 cash only student rush ticket available at the theatre – subject to availability – prior to each show.