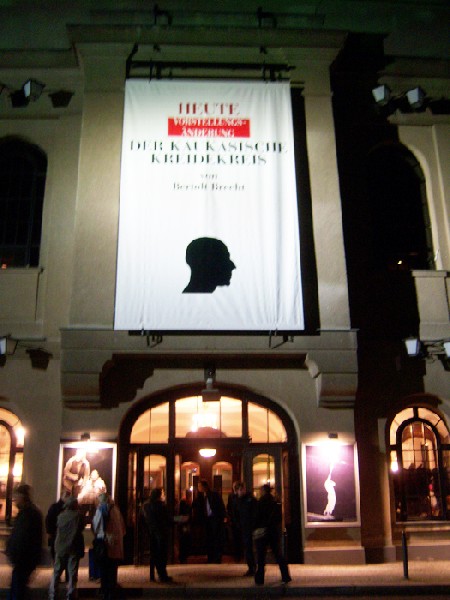 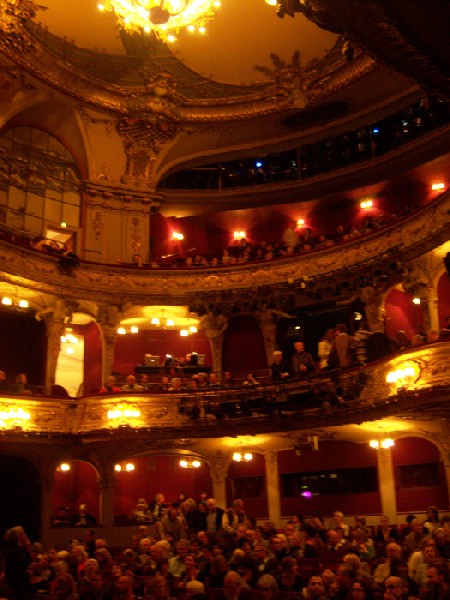 The theatre and audience before the play’s beginning. 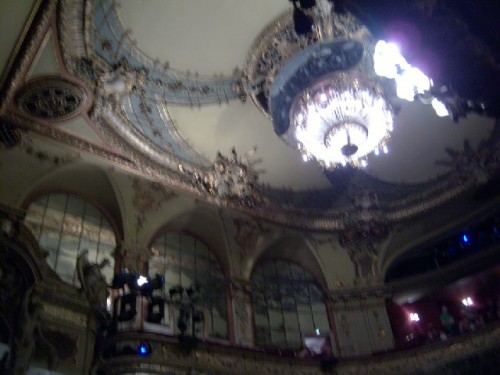 High above the stage. 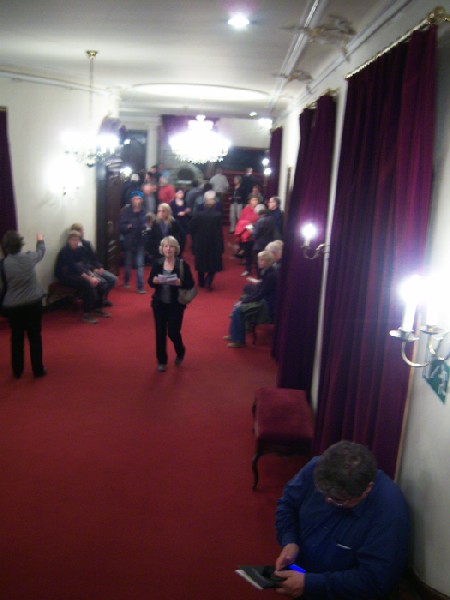 During intermission at 'The Caucasian Chalk Circle.â€™ 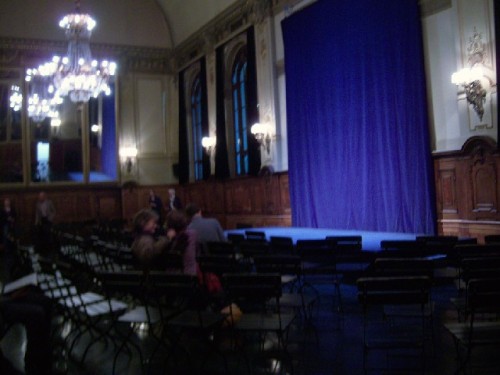 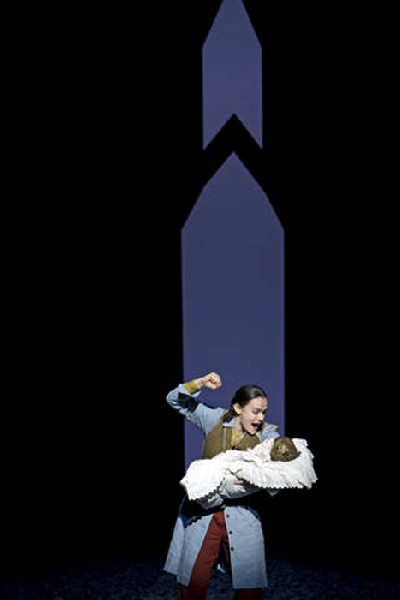 Grusche and baby Michel begin their journey. All production photos by Bernd Uhlig. 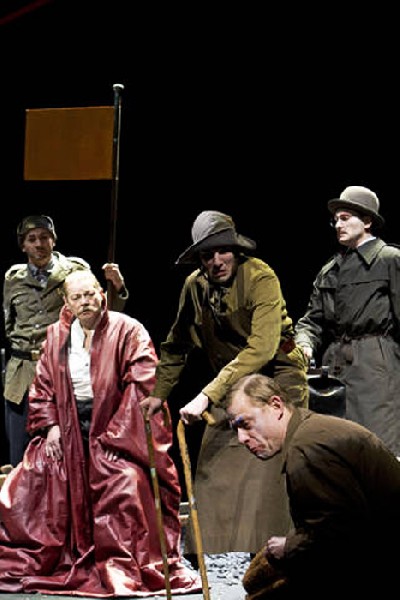 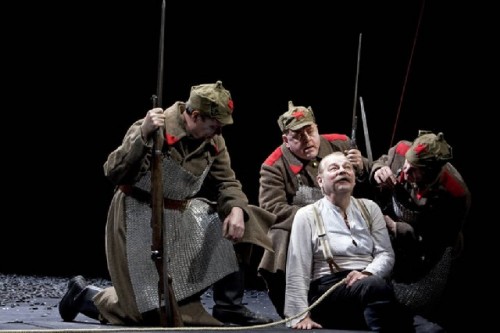 Being a judge can be very unpleasant. 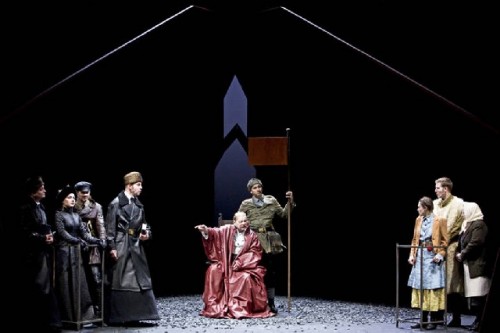 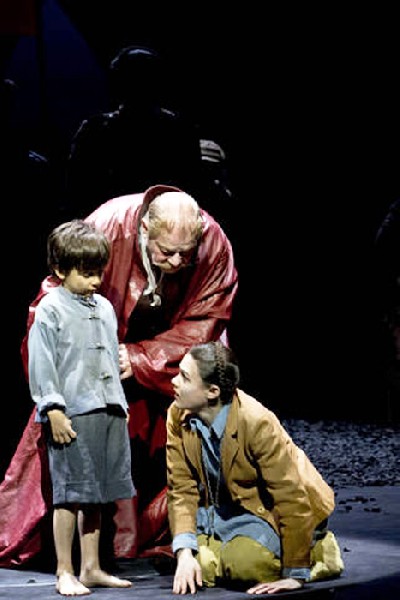 Proceedings during the trial. 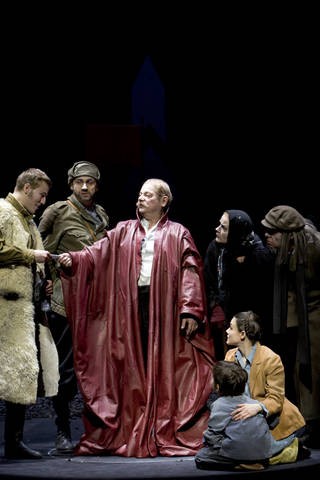 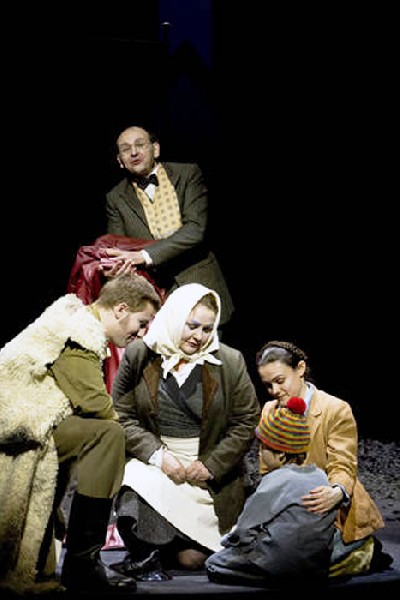 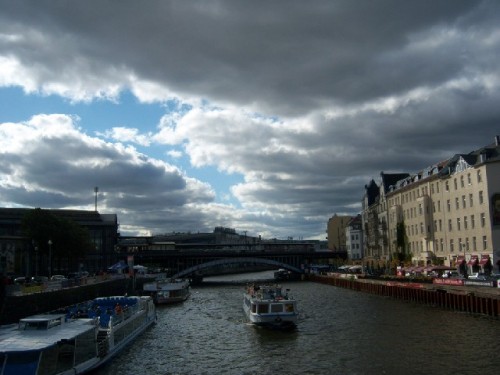 The Spree river on my way to the theatre. 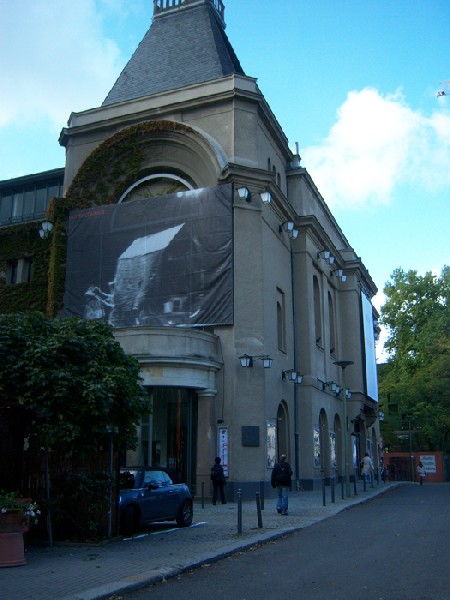 The imposing building during the day. 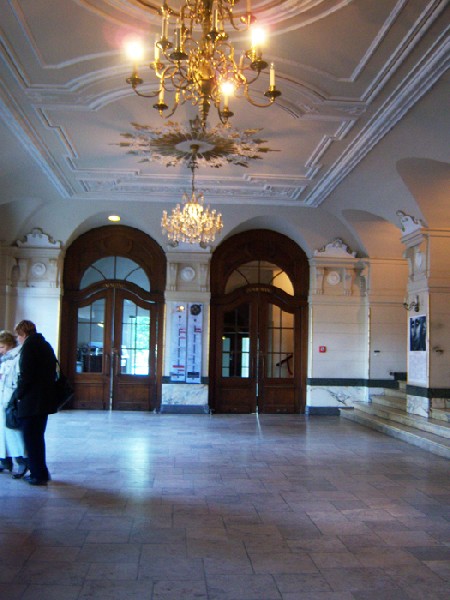 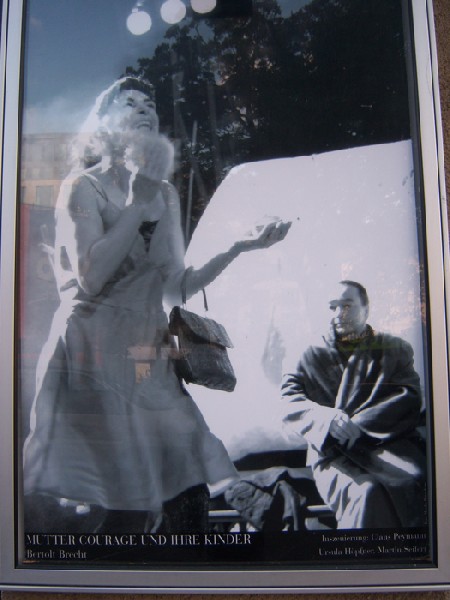 A theatre poster of â€™Mother Courage and Her Children.â€™ 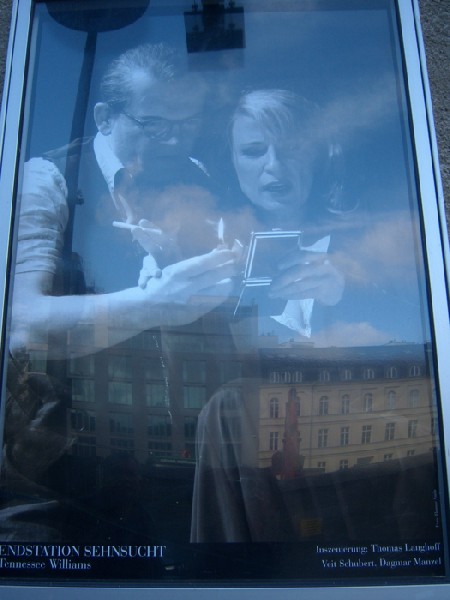 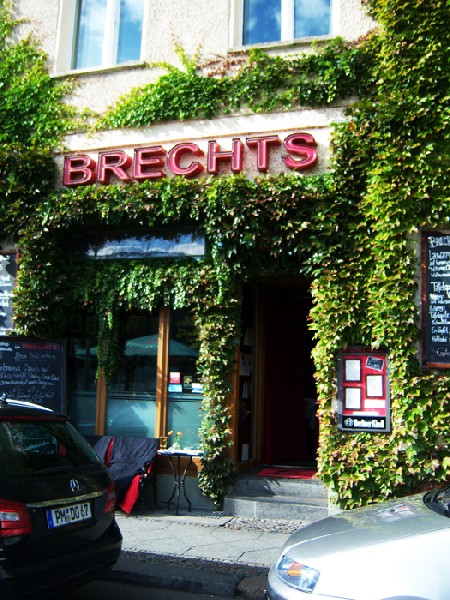 A relatively new addition to the neighborhood: Brechts Restaurant. 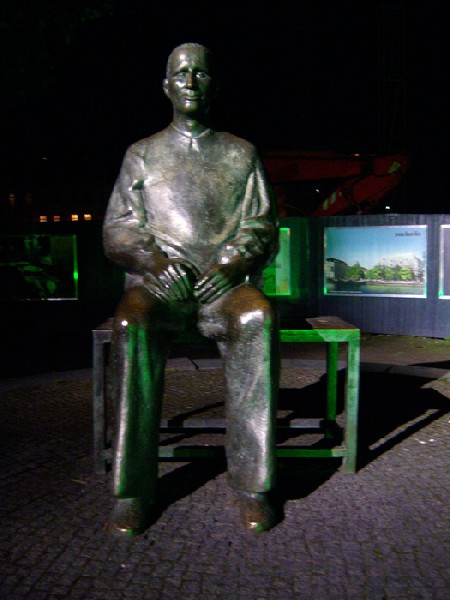 The Bertold Brecht monument at the plaza in front of Berliner Ensemble.

Berlin is a vibrant city! Only one week in Berlin, but what great experiences.

It was fortuitous that I would see the Caucasian Chalk Circle by Bertold Brecht at the Berliner Ensemble theatre, at Schiffbauerdamm, located in the center of the city. But it was no accident that the play opened this season after years in hiatus. We live in restless and ever shifting times, where monumental challenges have to be solved world-wide and The Chalk Circle presents and questions some of those timely and ever present issues.

The theatre is located just around the corner from my temporary home with Bettina and Horst Hiemer, my cousin, a seasoned and distinguished actor, who played during more than 30 years a few of Brecht’s characters in Berlin.

Brecht had written The Caucasian Chalk Circle in 1941, while still living in America in exile. From 1949, after his return to Germany, until 1954 Brecht and his ensemble were members of the Deutsche Theatre in East Berlin. He negotiated for independence and his own theatre and desired to return to the place, where The Three Penny Opera had premiered in 1929. Brecht spent an entire year revising The Caucasian Chalk Circle and presented it as the opening production at the Berliner Ensemble in 1954. It was received as a failure ! The production was rejected by audiences and the Cultural Ministry, the financial backers of cultural institutions in the former German Democratic Republic, East Germany. A failure, as it was seen contrary to aesthetics at the time.

Yet, Brecht with his ensemble presented the play that year in Paris at the International Theatre Convention and twelve months later in London as well, where it was celebrated. During a pre curtain talk the audience learned that Brecht considered the Chalk Circle his Kern Schauspiel, a core play, based on an old Chinese play. Slowly, The Caucasian Chalk Circle was recognized as an important play back home as well.

I took my seat with high expectations close to the stage and in anticipation of a moving experience. The stark stage was covered with grey stones in front of two black interfacing walls. Each had an orange diagonal line drawn and the front of the stage was black and bare. An intense blue lent color to a few scenes on the otherwise dark stage. The director of this production, Manfred Karge, also designed the very effective and minimal set. And, lighting designer Ulrich Eh’s work punctuated strongly the austere play.

The Narrator (Norbert Stoess) arrives to present the play within a play: Deep in Southern Russia, in the Caucasian region, a comsomol has to decide whether to continue with the declining cheese production or attempt to build a brighter future for their valley by planting fruit trees, peaches and other trees. It is a gamble and the community is treated to see a play. The representatives are asked to draw an analysis to their own situation, and the play begins:

These are tumultuous times; the governor has been killed by invading troopes. The governor’s harsh wife (Marina Senckel) escapes. She is preoccupied with deciding what dresses of her wardrobe to take into exile, and leaves her baby, Michel, behind while fleeing.

Grusche, a maid, (Anna Graenzer) has to say good bye to her beloved fiancé, Simon, a soldier (Felix Tittel), who is going off to war. She comes upon the baby, dressed in brocade clothes. She realizes the high birth of the crying and lonely baby and reluctantly takes Michel on her dangerous and arduous journey back to her brother and his pious wife (Claudia Burckhardt) in the mountains. Grusche, unmarried with child, has to be married off to keep the ‘good family name.’ Her brother (Roman Kaminski) arranges a marriage to a dying farmer, who of course recovers from his fatal illness. Life for Grusche and Michel is hard!

Meanwhile in the city, Azdak (Dieter Montag), has been installed as the new judge. He is corrupt and generally drunk, takes from the rich, but often gives judgment in favor of the downtrodden. Again times are changing, the elite have returned. Azdak wants to disappear, because too many of his decisions helped the poor.

The former governor’s wife also returns and wants to reclaim her husband’s properties. She cannot do that without her biological son and heir to the land. Soon a search gets underway. Grusche and Michel are found and brought to the city to court. Grusche’s love, Simon, had survived the war, but finds his former fiancé married, much to his dismay. He is willing to claim fatherhood for Michel, so that Grusche can keep the son she loves.

Lawyers for the governor's widow argue for the rights of the biological mother, allegedly separated from her son by accident. Azdak, the judge, does not want to hear any of it. He has a circle drawn and the boy placed in the middle. He orders the two mothers to pull on each of Michel’s arms and who pulls the boy to her side, will have her son. Twice, Grusche will not pull the boy. She cannot hurt Michel and prefers to give him up.

Love and years of hardship trump! Azdak orders Michel to be returned to his real mother, Grusche, who had raised him and the judge also divorces her from her mean husband. She can now marry her real love. All’s well that end’s well ?!

The parable also leads to the decision in the valley, reluctantly by some, to change the economy.  And, a question may have been answered, which was posed in the pre play discussion: Who owns the future? Those, who occupy a place by birth and circumstance or those, who work hard for it – and our children are our future!

I was spellbound by the actors of a fabulous ensemble and a play in two acts and 25 scenes. The production identifies more than 30 actors for the play, a large cast. The company has more than 100 actors on it's roster. They are hired per season or have long standing relationships to the theatre. It is a continuation of the Brechtian model.

Grusche and the Narrator sang short ballads, in the typical Brecht/Weill style of the Three Penny Opera; harsh and non melodic. Dieter Montag as the judge was clearly also the favorite of the audience. He received the longest sustained applause. He had played his role deftly and with a vengeance in his red flowing robe. Norbert Stoess as the Narrator did an excellent job, while moving the audience from scene to scene. And, Anna Graenzer as the young Grusche played her role seemingly vulnerable or strong as demanded by the play. I experienced the second act from a loge seat in the rear quite differently from the first act.

Jessica Karge, costume designer, placed the returning governor’s widow and her lawyers into long black hooped skirts or coats, to indicate their large positions in life and on stage. Grusche and her people were dressed in near rags.

The two and a half hours went by seamlessly, serious entertainment presented by an exquisite ensemble!

November’s daily schedule announced more than 20 different plays on the major stage and as many productions on two smaller stages, where events and contemporary plays are offered. Among three other Brecht plays currently in production, Mother Courage and her Children is best known in the USA. The theatre is also presenting Shakespeare’s Romeo and Juliet, Chekhov’s Cherry Orchard, and Endstation Sehnsucht; the original title, of course, is A Streetcar Named Desire byTennessee Williams. Robert Wilson and Rufus Wainwright with text selections by Jutta Ferbers, are presenting Shakespeares Sonette.

The current General Manager, Claus Peymann, like Brecht has a firm commitment to political theatre, however more broadly interpreted. Peymann has been General Manager since 1999 and reopened the ornate neo-Baroque theatre in January of 2000, after renovations were completed.

The theatre has gone through several winding phases, since Brecht took it over from 1954 -1956. After his untimely death HeleneWeigel, his widow and famous actress managed the Berliner Ensemble until her death in 1971. After the German reunification the theatre was privatized, but continues to receive a large portion of its budget from subsidies; State or Federal subsidies are given to many cultural institutions in Germany. The Berliner Ensemble is a storied and historical institution and is well alive.

Two American artists have left their mark on Berliner Ensemble. Alexander Frey was appointed Music Director in 1992 and Robert Wilson premiered Brecht’s The Flight Across the Ocean in 1998 at the occasion of Brecht’s 100th birthday. As noted above, Wilson has an ongoing relationship with the theatre.


Bertold Brecht’s statue is seated on a pedestal in front of the theatre’s small plaza, but his gaze is turned away from the theatre. I wonder why?