Vasily Kandinsky at the Guggenheim

Kandinsky at the Guggenheim Museum 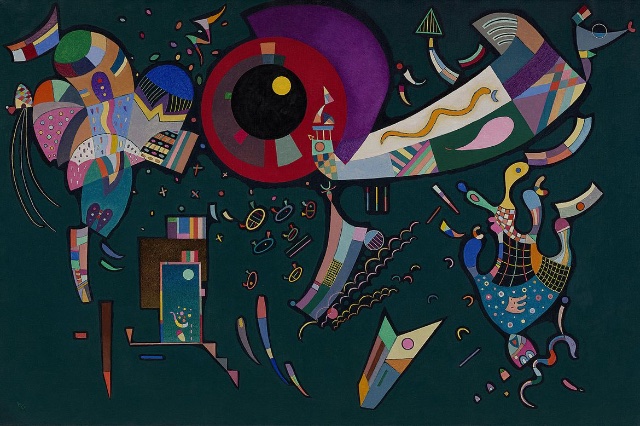 Around the Circle by Vasily Kandinsky 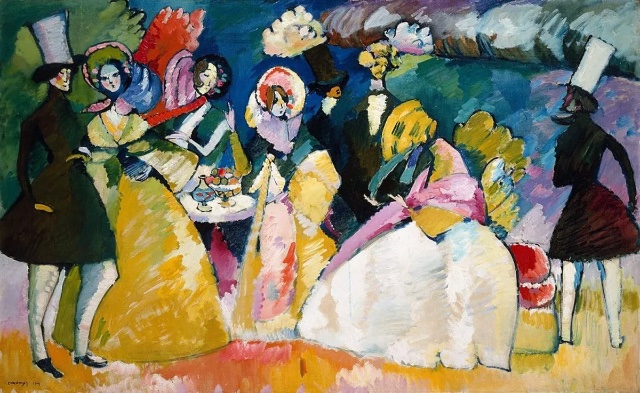 Group in Crinoines by Vasily Kandinsky 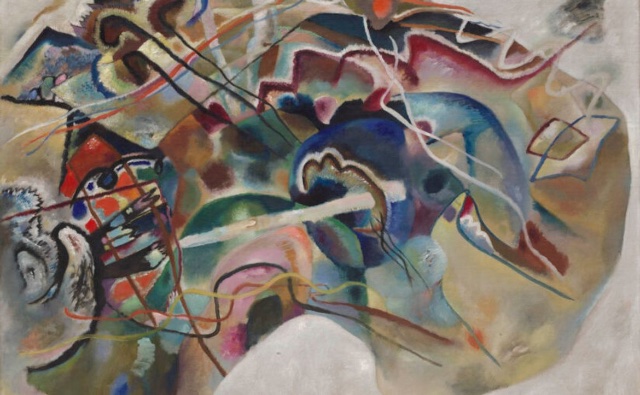 Kandinsky. Painting with a White Border

The painter Vasily Kandinsky is a natural for exhibition at the Guggenheim Museum in New York. He was a favorite of Solomon Guggenheim and Hilla Rebay. His work often centered on circles.

The museum in which this exhibit is mounted is a spiral, its circles ever larger as they rich the pinnacle of the show, a crowning skylight. Guggenheim hired Frank Lloyd Wright to build a museum related to paintings "like a beautiful symphony such as never had existed before." Kandinsky heard music like that of Arnold Schoenberg in his paintings. He painted in tones.

The exhibit is titled Around the Circle. It can be approached from the third tier and followed to the top, in reverse order of the composition of the works. Or you can choose to start at the beginning. in the spiral's final tier.  Of course, on the ramp you are in a time-space continuum, always aware of where you have been and where you are going. Wending through the exhibit, the mix of forms and meaning illustrate the pull forward and the pull back of the artist at work.

Kandinsky worked in this Janus mode. While he painted abstract forms, they were not purely abstract with reference to nothing. Instead they suggest biomorphic shapes, and often transfer an idea. These gives his forms a particular power.

Kandinsky is clearly interested in concrete notions. In his lines, you see clouds, hills, stick figures leaping, a horse. Not at all childish, they often resemble stripped down children's drawings.

To the extent that poetry sees the unfamiliar in the familiar, these works are poetic.

Some lines are so urgent that they seem to press to get through the edge of the frame. Embryonic shapes are softened in outline. Dark backgrounds suggest the thunderous collisions the painter felt around him. A white border subtly contains pastel colors. An early painting like Group in Crinolines is less an impressionist study than an exploration of dashing colors.

Kandinsky was close to Paul Klee during their Bauhaus days. He adopted Klee's habit of wittily naming his works. He also seems to have been captivated by the playfulness of Klee's lines and figures.

The Guggenheim is a playful place to look at art. Wright's dream of using natural light and propping art work on easels never came to be. There are nooks for the display of one or two paintings. The curators don't have to deal with the hanging of one work after another on a flat wall. The viewer can step in and examine one work or compare just two. It is an intimate experience.

Yet viewers are always part of the crowd. Look across the balcony and you will see other people.  Look up, and viewers are in a procession to the top. Art is very much part of life. The spiritual aura that Wright created wafts through the air. A museum like this may well be a modern temple, the paintings, reliquaries.