Christmas Comes to the Berkshires 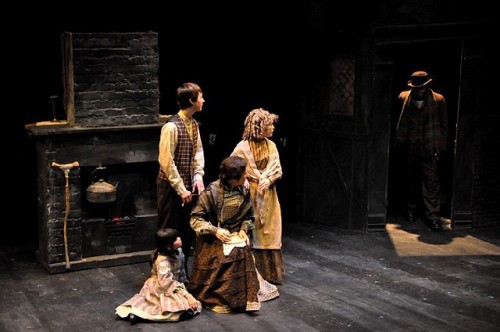 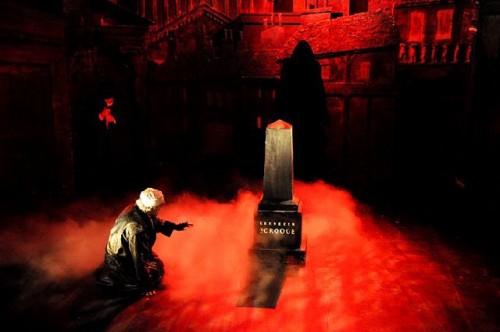 The Ghosts of Christmas Past, Present and Future haunt Scrooge. 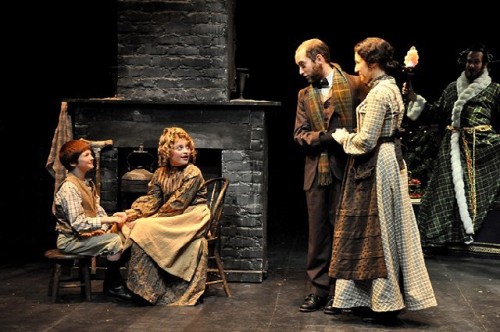 A Christmas Carol is a family favorite every holiday season. 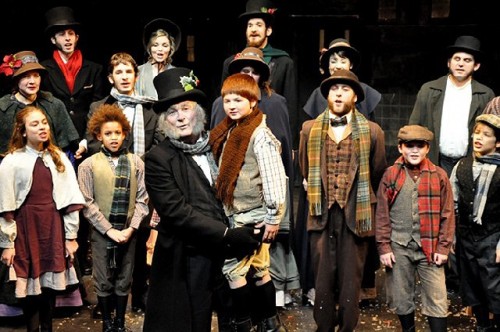 A large cast is a hallmark of the Berkshire Theatre Festival production in the intimate Unicorn Theatre. 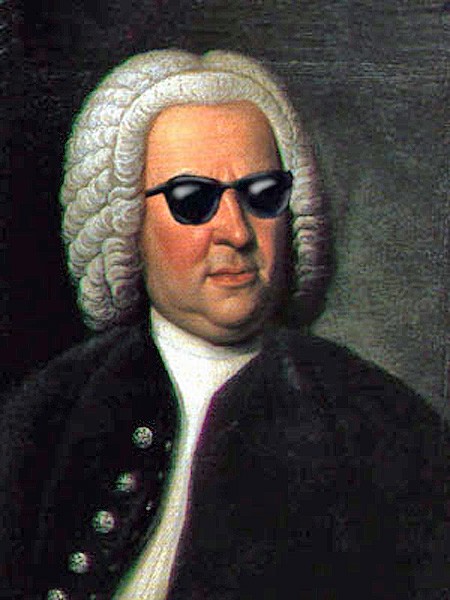 Sebastian Bach is cool for Christmas and the New Year as the Berkshire Bach Society gears up for several performances of his work. 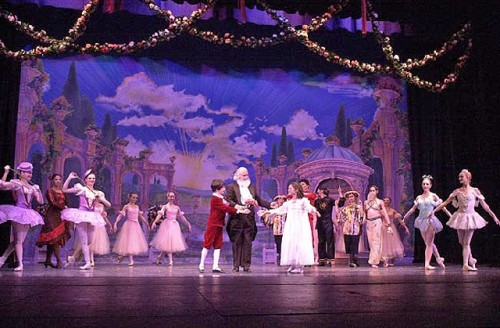 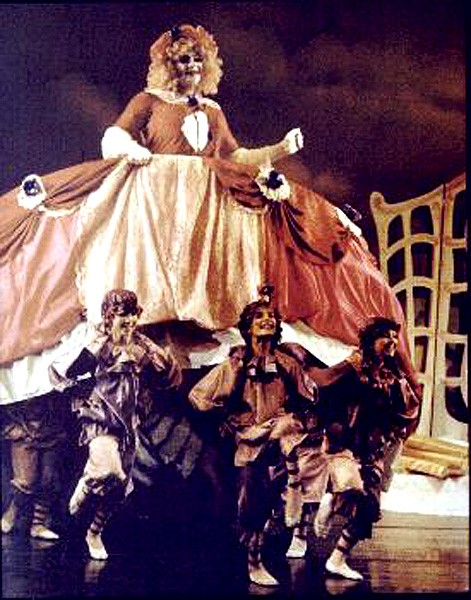 Mother Ginger always has a children’s surprise waiting under her skirts during the second act of The Nutcracker. Photo by Maurine Sutter 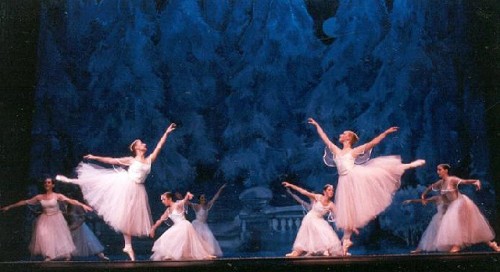 The Albany Berkshire Ballet’s Nutcracker is a visual treat with dancing snowflakes. 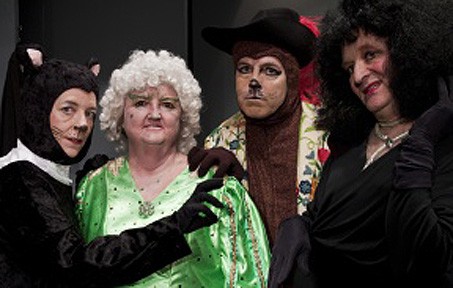 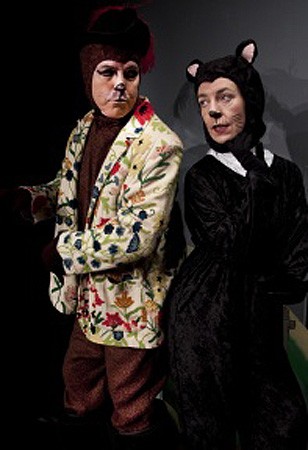 The PantoLoons include Paul Murphy is Puss in Boots and Johnna Murray is Helixa the Witches cat. photo: Dan Region 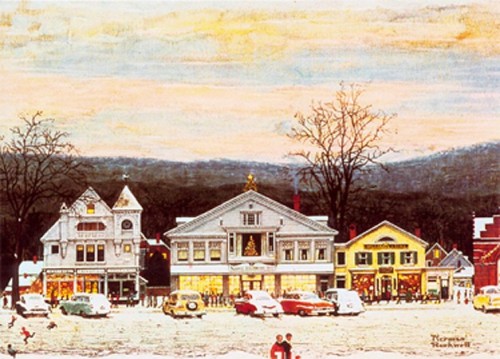 Norman Rockwell’s Main Street Stockbridge is the image many think of when they imagine a New England Christmas. 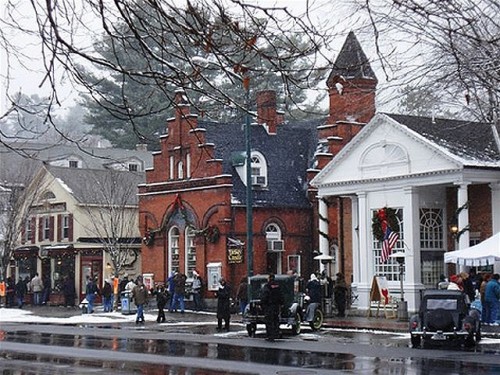 The Norman Rockwell scene is recreated December 5-6 during Main Street at Christmas in Stockbridge. 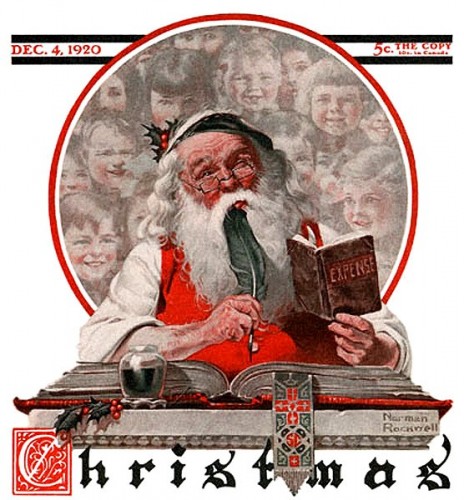 Rockwell contributed greatly to the image of Santa Clause. The Norman Rockwell Museum has wonderful examples of the artist’s work.

The Albany Berkshire Ballet presents The Nutcracker at the Colonial Theatre.

Throughout the Berkshires twinkle lights are turning on, the holiday decorations are coming out of storage, and the shovels and snow blowers are being readied. In Stockbridge, where America's most beloved traditions were immortalized by Norman Rockwell -  they are preparing for Main Street at Christmas.  This popular annual event  takes place on December 5 and 6 in 2009.

Over at the town's resident  Berkshire Theatre Festival,  Artistic Director Kate Maguire tells us that "We're bringing new energy to this year's production of A Christmas Carol." With 21 scheduled performances, the timeless Dicken's classic has become the Berkshire's biggest holiday tradition. It will open on December 12 and continue until December 30 at the company's Unicorn Theatre.

According to Maguire, "As always, our production will feature a wonderful group of children from our children's theatre company.  However, we're making subtle changes this year that are going to really be interesting to watch.  We've moved many of the actors into new roles so that will bring a new energy to the production.  In addition, we are-examining the role of the narrator in both our story as well as in storytelling in general.  It will be subtle, but it will definitely bring a new aspect to this beloved show."

Eric Hill is returning to direct and star in the production for the fourth year in a row.  He is known for his distinctive directing style and powerful stage images. The production is co-directed by E. Gray Simons III who has worked at BTF for more than a decade as an actor, playwright, teacher, and director.

Hill concurs that there are changes afoot: ""While this is a beloved tale and one of my favorite holiday stories, I wanted to explore something a little different this year.  While the traditional tale of the redemption of Scrooge will remain the same, we also want to look at the very nature of telling this or any story.   We've made some subtle changes that will help deepen our understanding and really make this a fresh production.  It should be quite exciting."

This year, BTF will be introducing movie pricing for select performances.  The Sunday evening performances on December 20 and December 27 will feature $10 tickets for all patrons.

Tickets are regularly priced for other performances at $19.50-$39 for adults, $15-20 for children and students.  Discounts are available for groups of 15 or more.  Tickets can be purchased via the box office at 413-298-5536 ext. 33 or online at www.berkshiretheatre.org.

Of course, A Christmas Carol is not the oldest tradition. That honor has to go to the classical composers. For example there was a community singing of Handel's Messiah which took place Thanksgiving weekend in Great Barrington by the Berkshire Bach Society.

Upcoming is a performance of the Bach Christmas Oratorio, Parts 4,5, and 6 on December 19 at the First Congregational Church in Great Barrington, conducted by Kenneth Cooper with the Bach Singers and Players. The New Year is also welcomed by the BBS with the 6 Brandenburg Concerti at the Mahaiwe Performing Arts Center  on December 31, and the Colonial Theatre on January 1. The BBS performs it one final time at the Troy Savings Bank Music Hall on January 2.

Also at the Colonial is An Nollaig: An Irish Christmas with Eileen Ivers. Sponsored by Nelson Furlano, CPA on Saturday December 19.  Eileen Ivers captures the spirit and magic of the season in her heartwarming holiday show. The program features traditional Irish songs, original tunes and specially arranged holiday favorites. Ivers is described by the New York Times as "the Jimi Hendrix of the violin."

The Mahaiwe has also slated two classic holiday movies for its big screen. First up is the 1947 classic, Miracle on 34th Street unspoools on December 20. It features a Kris Kringle who insists he is the real Santa Claus.  This is followed by The Polar Express on December 22 which takes a young boy on an exciting journey of self-discovery to the North Pole.

From a commercial standpoint, Christmas 2009 doesn't exist except for an updated version of A Christmas Carol, the sole holiday-themed movie of 2009, which was released early in the season on Nov. 4 and continues to play at the North Adams Garden Multiplex and elsewhere.

Of course, Christmas arrives early for corporate America. Holiday decorations started appearing on Labor Day in some stores.  It is likely by December 25 the marketing geniuses will have already moved on to Valentine's Day. Amazing, isn't it?

Another long time tradition, not only in the Berkshires, but throughout the world, are annual performances of The Nutcracker, Tchaikovsky's popular story ballet.  For more than a decade, the Albany Berkshire Ballet has offered annual performances of this delightful work for us. Many make it an annual pilgrimage. Choreographed by founder Mdeline Cantarella Culpo, the performances are already underway around the region, culminating with four performances at the Colonial Theatre on December 12-13.


A British Panto at the Ghent Playhouse in New York

Pantos are an English treat every bit as delightful as scones and clotted cream, and as much a part of an English Christmas as the Wassail Bowl and Carolers. You would think that our own Shakespeare & Company with its roots in Britain would have thought of doing one of these family shows long ago, complete  with its innocent gender-bending madness, merriment and mirth. Instead  they are trotting out a new version of Cinderella, Cindy Bella for the holidays, directed by Irena Brook.

You'll just have to hook up Dobbin to the sleigh and wend your way over to Ghent, New York for a genuine Panto holiday treat.

That's where you will find the PantoLoons, now celebrating their tenth year of doing authentic British panto's, currently playing at the Ghent Playhouse.

What's a "panto" you ask? Well it is a long and popular British holiday treat consisting of music, madness and schtick for the Holiday season. In this case it is a loose - in fact very, very loose - adapatation of Puss in Bots or a Tale of Two Kitties.  Already underway, the merriment continues until December 13.

This year: once again, Tom Detwiler directs and, in the Dame role, plays the wicked Pollutia von Schtunk; Judy Staber acts as the offstage producer and the onstage good fairy, Aunty Dote; Rick Rowsell and Ron Harrington play the less attractive sisters and both build Rowsell's always wonderful fairy-tale sets, Harrington is also a crackerjack lyricist; Cathy Lee-Visscher is the heroine and their lovelier younger sister Flora who wins the heart of the "Principal Boy" Sally McCarthy. Johnna Murray plays the witch Pollutia's cat, lending her voice as well as invaluable input to the lyrics and script. In the title role of Puss in Boots, Paul Murphy cat-raps his way through the Panto, magically helping Flora outwit her nasty sisters, and everyone ends up happily every after.

Joanne Maurer, who for all ten years has created amazing costumes for the troupe, plays Sally's father Rich Gentry. "Yes, we have a lot of gender-bending, a Panto tradition, which we take to the max," says Staber, who writes the majority of the scripts with much input from the cast. This year, the PantoLoons have a new addition, Mark Schane-Lydon who adds his own zaniness as Yolanda Gentry, real estate developer.

All in all, it's a pretty impressive list of holiday treats. Here's hoping you and your family and friends get to enjoy some of them!