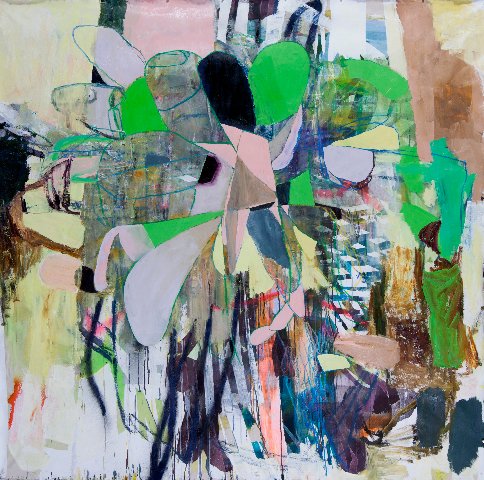 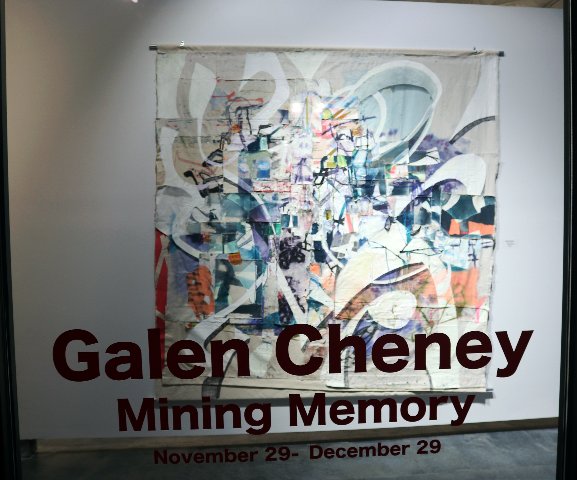 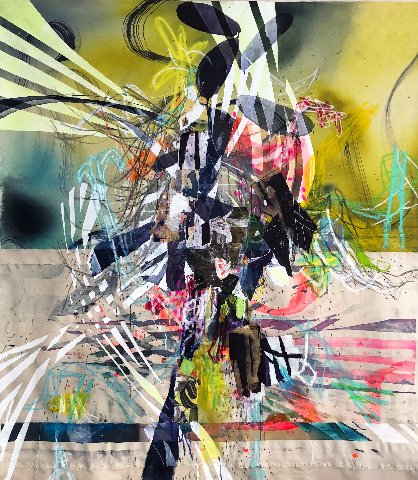 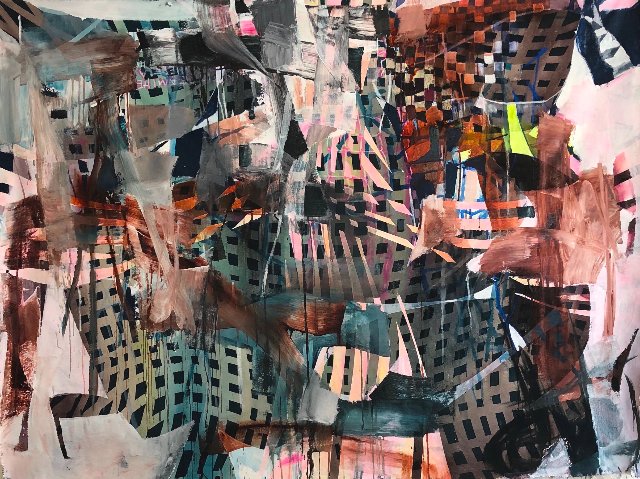 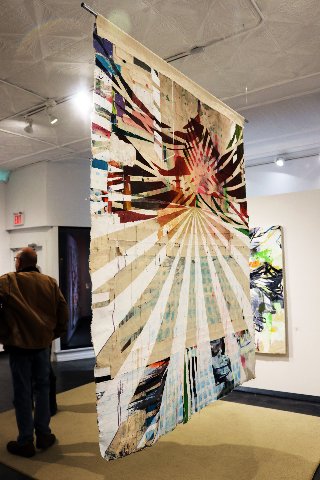 A work suspended from the ceiling. 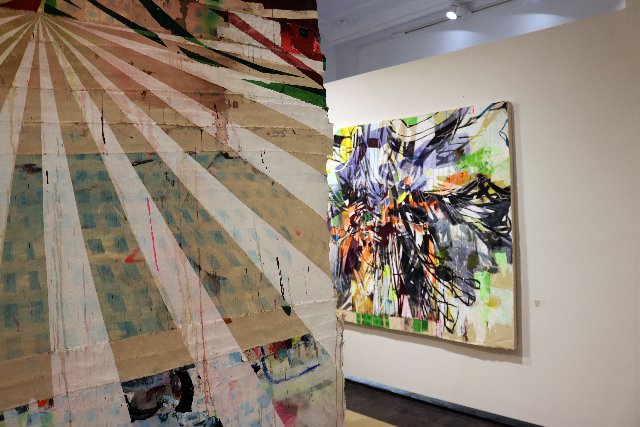 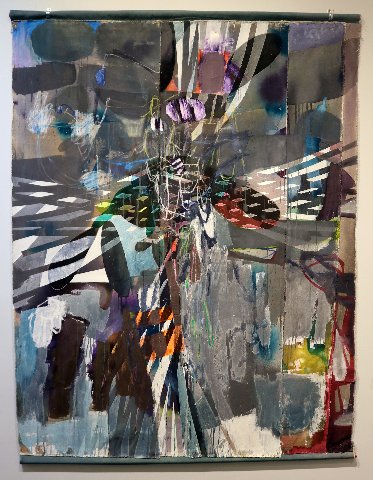 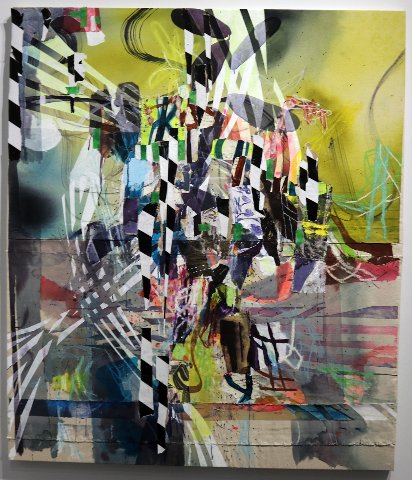 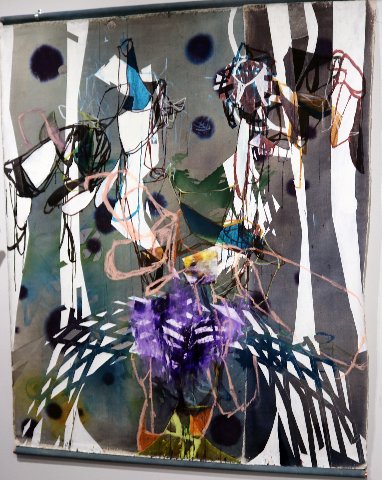 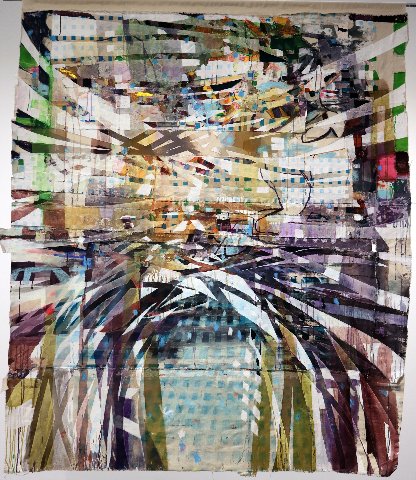 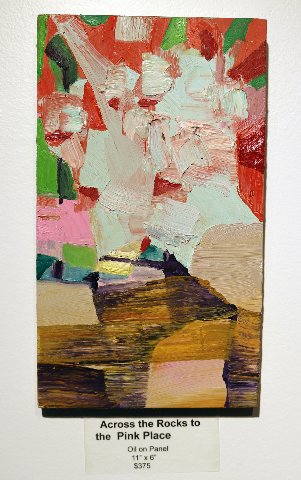 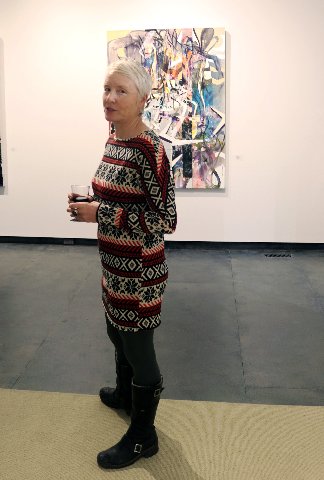 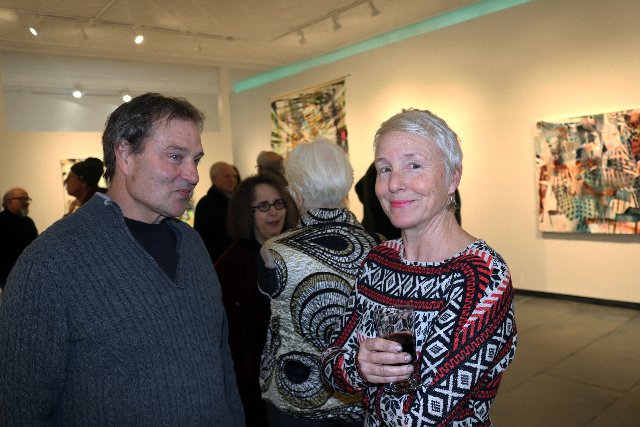 The artist with gallerist Bill Riley.

The anchor leg of a stunning season for Real Eyes Gallery in Adams, Massachusetts features “Galen Cheney: Mining Memory” through December 29. After which there will be a break resuming with the second show of work by Henry Klein in March.

A couple of years ago Galen and her husband John bought a home in North Adams which they are renovating. Initially, she rented a small studio which also functioned as a gallery on Eagle Street. Now she works at home. Since moving to the Northern Berkshires her work has been seen including a recent group show of women artists at Gallery 51.

On that occasion she and the other artists engaged in a discussion as a part of the recent launch of programming at Tourists, an upscale motel in North Adams.

Cheney received her B.A. from Mount Holyoke College and her M.F.A. from the Maryland Institute, College of Art where she studied with Salvatore Scarpitta, Hermine Ford, and Grace Hartigan.

During the well-attended opening yesterday I asked what was new about the work? The individual pieces are so diverse that they suggested broad experimentation over a time line. Looking at “Bloom,” for example, it seems different from two adjacent works.

The primary aspect of the other two painting was ribbon like patterns. This is a pronounced aspect of several works in the exhibition. They may be regarded as ribbons of color, grids, or asymmetrical checkerboards. There are connections to modernism in the artists Kandinsky and Klee. Or more directly to post war European abstract artists like the Portuguese painter, Maria Elena Viera da Silva, or the French painter Georges Mathieu.

Approaching “Bloom” for closer inspection she pointed out that the three works in question were all created at about the same time. If one looks carefully at “Bloom” traces of the patterns of the other works have been painted over. There is a layering and she described that process and discovery, risk taking, and being open to change is essential to her approach.

“It’s different from artists who plan ahead or whose latest work is much like the most recent one” she told me.

This approach has roots in the neo Platonism of Michelangelo or the spontaneous action paintings of the abstract expressionists. It is a notion of finding the image and letting it come to life in some alchemical manner. When it works best the resulting image can indeed be magical. But working without a net, so to speak, entails risk. As Icarus discovered by flying too close to the sun the wax melts on one’s wings.

The trick is to time it just right and that’s the real challenge for any improvisation from Michelangelo’s unfinished “Slaves” in the Accademia, to Charlie Parker’s “Ornithology,” or Jackson Pollock’s “Lavender Mist.”

With no preliminary drawings of bozzetti Michelangelo carved directly into marble to find or liberate the figure. Art historians discuss that he was influenced by neo Platonism which is what I intuit here contemplating works by Cheney.

No doubt that strikes you as a stretch and head thumper. But another approach to understanding art, as Malcom X put it, is by “By any means necessary.”

The change came for her during a 2015 residency at Da Wang Culture Highland in Shenzhen, China. She tore paper and made collages which is evident in this work as well. Also reflecting that experience there are hanging kakemono scrolls as well as stretched canvases.

One such work is suspended in the gallery. We circumnavigate it allowing observation of how pigment bleeds through the layered collaged support.

In post war American art spontaneity became a fetish. Clement Greenberg described “all over paintings.” Pollock put canvas on the floor and danced around it flinging paint. It was the “end of easel pointing” and the primacy of the brush.

Part of that alchemy was a studio secret. There is always curiosity about how an artist does the work, or an actor finds a character. Is our eye fast enough to catch the three-card monte and legerdemain? To what extent is an artist an illusionist or trickster?

Not content with black and white still pictures of Pollock at work Hans Namuth insisted in making a ten minute color movie. The camera was mounted under a sheet of glass on which the artist dripped paint. The trauma of the experience set the artist on a binge from which arguably he never recovered.

At times we look at art that appears to be intuitive but in fact isn’t.

The trope of abstract expressionism was broad attack and sweeping brush stroke as well as the inevitable drip. Was Pollock a matador with blood on the canvas of sand as the drip of duende?

It is astonishing to learn that large, gestural, black and white paintings of Franz Kline were worked up from studies and sketches. Some of them were created on pages torn from phone books. It begs the question of which is the improvisation. Similarly, Bird just blew riffs while musicians who evolved from Bop read charts.

Pre pop the young Andy Warhol explains to Ivan Karp, his dealer, why he has to have drips in his paintings. In a video Ivan told Andy not to drip and do his own thing. Pop artist Roy Lichtenstein made hilarious parodies of “abstract expressionist” paintings.

There was a shocking revelation in a video of Robert Motherwell working on a large painting. On the edges of large broad strokes, with a small brush, the artist was painting “drips.”

The importance of the drip is as signifier of the frenzy of improvisation. It’s the overblown or “wrong/ bad” notes we hear from Trane. The drip or honk is when wrong is right on. Gerard Malanga and I disussed that there are no mistakes for Warhol. "For Andy the mistakes were part of the art" he explained.

One senses sweat equity and search for the unknown in the best works of Galen Cheney. Consider them prominently in “Fractured Angel.” There is just now and no was or then. It is the struggle of the artist to be of the moment evoking the energy of stillness and deep breathing. Alone in the studio time and tide stop dead in their tracks for the smile of a summer’s day.

Galen is a painted ship upon a painted ocean; navigating vast unchartered oceans, where on ancient maps hic sunt dracones.

The creative process and the exploration and manipulation of materials are the chief drivers of my work.  They are the engine and the fuel.  Experimentation, risk taking and pushing my own boundaries are ongoing concerns, always with an eye toward gritty beauty and a palpable energy.  This energy alternately recalls natural forces or more urban frequencies.

The work I am currently making is a furthering, a deepening of work that I started during a residency in China in 2015.  There, I was working with accumulated papers, building them up into multi-layered constructions.  While I continue to work with paper, I have also shifted that approach to using canvas and more durable materials.  The process is additive and reductive.  I use fragments of past paintings, old receipts, used airline tickets, remnants of past experiences and work them into the texture of the new painting. They become one with the surface, imbuing the painting with memory, history, a sense of time, and an accidental quality, which I find beautiful and compelling.  Paintings made this way—constructed, really--have a distinct object-like quality, which is satisfying.

Working in this physical way allows my mind to stay open and present in the process.  It keeps me from becoming too tight and closing down the creative possibilities of a painting before it is finished.  I strive to keep the painting as open as I can for as long as I can before finishing it.  It is the opposite of planning a painting and then executing the plan.  I prefer my paintings to have a raw, open quality.

More recently I have introduced liquid textile color into my work, which I pour and brush onto raw canvas.  This fluid, intensely pigmented paint soaks into the canvas and is often difficult to control, which is an ideal way to open a path into a painting. I am now working on combining this staining process with collage and oil paint.