Too Far North of the Border 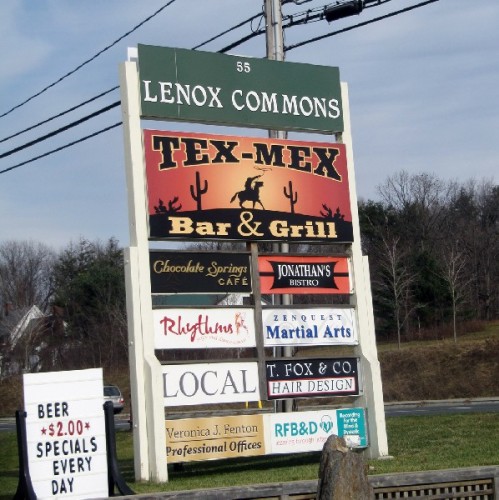 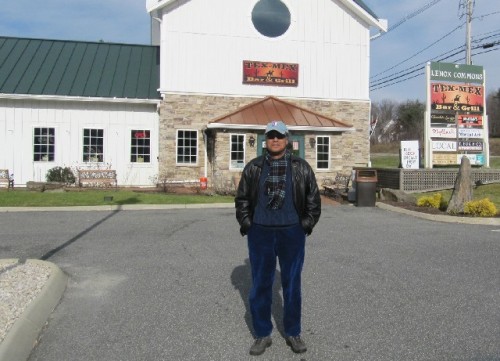 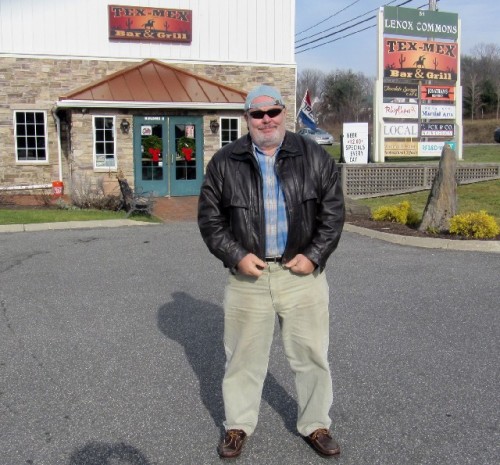 Cisco was eager for lunch. 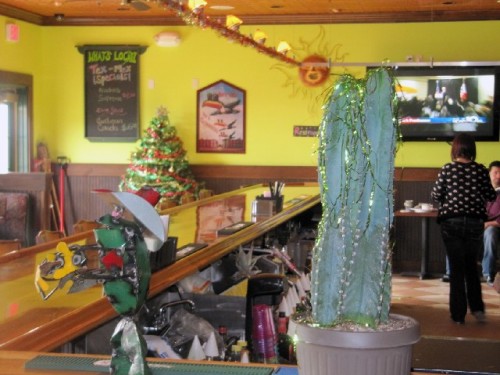 It takes more than a cactus to create an authentic ambiance. 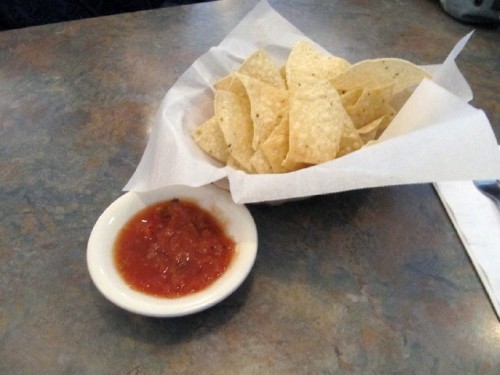 The complimentary chips and dip. 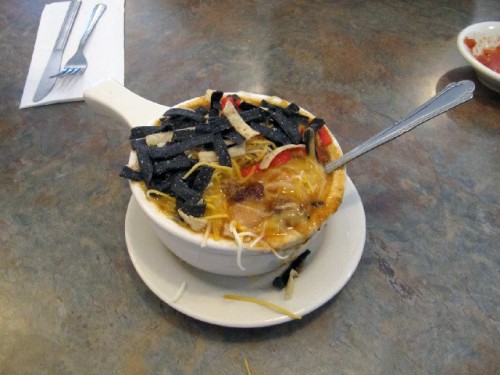 Ersatz Texas Chile whatever that means. 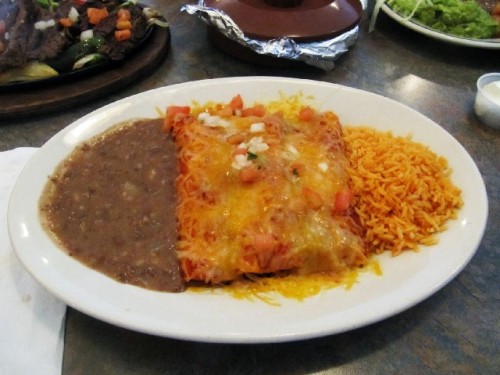 A platter of mediocre enchiladas. 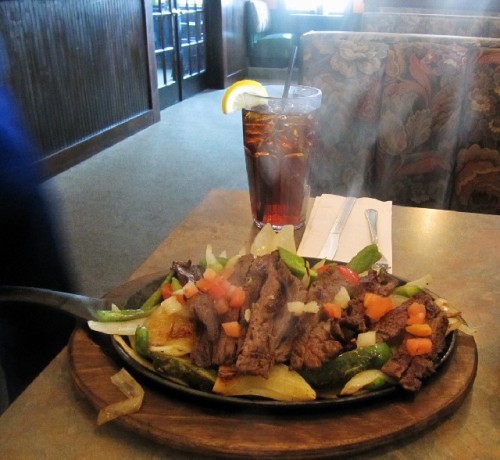 The fajitas arrived on a sizzling platter but fizzled after that. 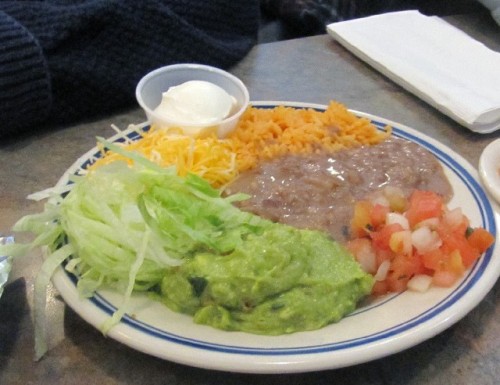 The sides with the fajitas were so so. 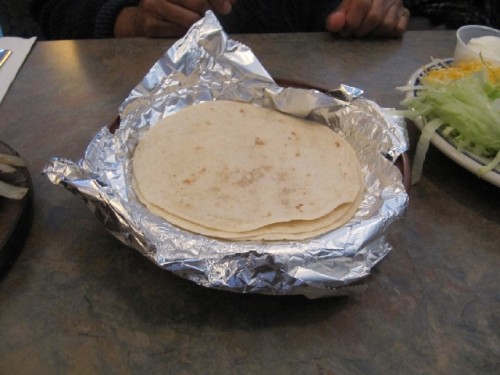 Soft tortillas for the fajitas.

A couple of years ago Cisco and his Sweetiepie drove from the Berkshires to Cleveland, then straight down to Marfa, Texas, Across New Mexico and Arizona, Colorado, then doubled back through Kansas and on home.

Much of the fun of being on the road entails exploring local cuisine.

It took several days just to get through Texas with stops first in Houston and then Marfa for its Chinati/ Juddd Foundation. Continuing along in the South West we encountered a great variety of Tex Mex restaurants from chains to down home.

So it was with anticipation that some months back we noted the arrival of Tex Mex on the main drag of Route Seven from Pittsfield to Lenox.

It was the latest incarnation of a large venue which seems to change hands and cuisine themes about every two years.

We tried it a couple of times last summer with disappointing results.

During the high traffic summer season it is a magnet for those on their way to or from Tanglewood.

For the vast majority of diners it’s a one shot meal. If the food is disappointing it doesn’t matter that much as a return visit is unlikely.

Even in the heart of Texas and the Southwest our Tex Mex food ranged from so so to awesome.

The best experience was in Houston when we walked across the parking lot from a mediocre hotel next to the highway to discover a truly remarkable restaurant. It was the absolute essence of great regional cooking and set the benchmark for the cuisine.

A part of the mandate of the Pit Bulls is to seek out ethnic food in the Berkshires. There is another responsibility to inform readers with honest reviews. Particularly in hard times with limited budgets for dining out we hope to be useful for fellow consumers.

In exploring the paradigms we have created benchmarks. Overall, for example, we had very good experiences at  a well managed chain like 99 in Pittsfield. The food while not adventurous proved to be of high quality with reasonable prices. On the other end of the spectrum we have had sublime meals at La Fogata and much enjoyed Mad Jack’s both in Pittsfield.

Because of the seasonal nature of the Berkshires the test is whether restaurants can survive the long off season and maintain year round standards.

The space for Tex Mex is large and generic. As it goes through incarnations and makeovers there are just a few decorations and accessories to set the theme of the new cuisine. In this case it takes more than a couple of cactus plants and some hokie ersatz ornaments to create the proper ambiance.

During our Friday lunch the cavernous space was conspicuously empty. In high season  there is a higher percentage of occupancy. The empty lunch suggests not much in the way of a local base of customers. For this border joint that means a long tough winter.

When we inquired about the daily $2 beer special it proved to be Bud Light. A tasteless beer to compliment a bland meal.

What follows are remarks by Pancho on the dishes we were served.

The Salsa Dip with Chips

No Good. Pure of tomato with no cilantro or spice.  The hot sauce didn’t help. The dip has passed its prime. It tastes old. My taste buds are well calibrated and I taste decay.

An absolute fiasco. I don’t know what they mean by Texas chile. For me its rattlesnake meat or whatever. But Progresso would be better than this. It’s watery like you said and I don’t think it’s fresh. Topped with multi colored taco chips. Total tourism. No consistency to it. A lack of bean. No spice. For a Mexican restaurant to have a total lack of bean is inexcusable. The meat is clumped and tasteless. It’s not even worth discussing. A complete disaster.

Well, it’s as bad as the chile. Dry. No taste. The outside wrapping was soggy but inside the filling was dry with absolutely no character. The chicken again was not fresh. The meat was stringy. It’s not Tex Mex. It’s just Tex.

Again watery and tasteless but I see some possibility with it.

Ok and the chesse was ok. Hard to ruin the cheese. The salsa that was served with the meal (Fajitas) was better then the dip. I mixed the salsa, refried beans and rice so that covered the mistakes. With some hot sauce.

There are a lot of problems here. One of the issues is that things get dry. (An indication of a kitchen with low volume and not much turnover so food sits and is refrigerated then reheated. You are not getting the food of the day.)

The meat got dry and the steak was too tough.

It is not a good restaurant. The kitchen is really off. Forget about not done with love. There is a lack of respect for the diner. The assumption is that the chef is a nobody. The owner assumes that the diner doesn’t know Tex Mex from Mex Tex or Tex Mess. This is a restaurant that should at least be at the level of a 99 or other successful chain. The better chains and it’s not. The restaurant that was here prior to Tex Mex was four notches better than this.

There’s no base for this restaurant. Here we are for lunch on Friday, payday, start of the weekend, and there is nobody here. We are the only customers in the dining room and there are just a few diners in the bar. A huge restaurant is virtually empty for lunch. That’s a bad sign that people may try the food once but don’t come back. You have to build a strong local following to sustain through the off season. If the quality goes down with less winter traffic it’s tough to survive. You have to maintain the quality of food year round during busy and slow times.

We arrived at noon which for the Berkshires should be the prime time for lunch. There’s nobody. We’re alone. Look at all the empty tables. Something is wrong.

They should close their doors and rethink it.