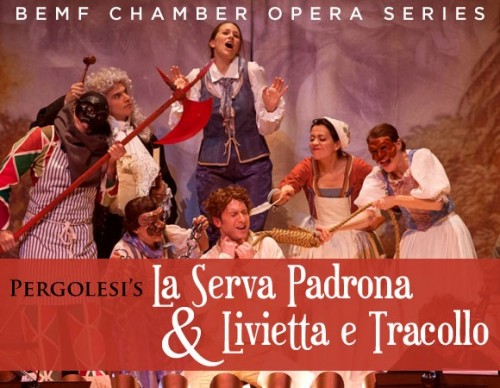 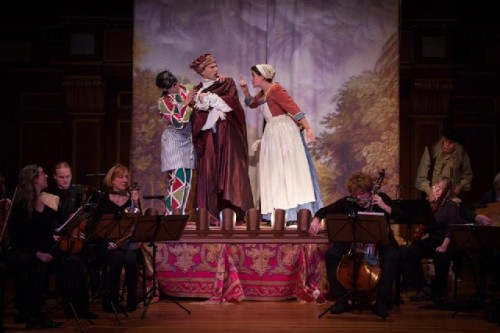 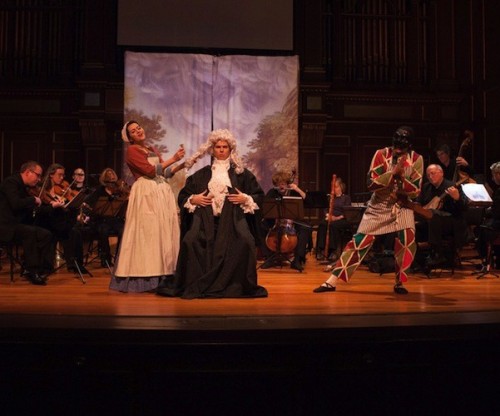 Forget the “Messiah.” Forget “The Nutcracker.” Boston has a new holiday tradition that makes those venerable music and dance traditions seem, well, venerable, as in old. The Handel & Haydn

Society is performing “Messiah” this year for the 161st consecutive season. (And may it endure to perform it for 161 more!)

By contrast, the Boston Early Music Festival’s Thanksgiving weekend of chamber operas, now in its seventh year, is refreshingly new, although its fare dates from the 17th and 18th centuries. Presented with vitality, lightness and the energy of youth, it has become something to look forward to, a refresh-ment after the excesses of the Thanksgiving feast. Semi-staged in Jordan Hall, the small chamber orchestra sharing space with the opulently costumed singers and dancers (courtesy of designer Anna Watkins), the productions make their modesty seem the most natural way to put on an opera. All you need is performers who can sing and dance with joy and precision and instrumentalists who can play as if they had started practicing in utero. (Of course, what works for “Dido and Aeneas” wouldn’t work for “Parsifal” or “Don Carlos.”)

So far, the works presented have come from the French, Italian and English repertories. What they share is relative brevity and simplicity. Until now, they have all been tragic: Dido kills herself when Aeneas leaves her; Actaeon is turned into a stag and torn to pieces by his own dogs after spying on the chaste Diana; Acis is killed by the jealous Cyclops Polyphemus; Orfeo (Orphée) is bereft when his beloved Euridice hurtles back to the realm of Pluto as he is leading her to Earth because he violates the one condition of her release: to not look back.

The pair of short intermezzi produced this Thanksgiving weekend broke that pattern: Pergolesi wrote the short comedies to fill the time during his serious three-act operas while the sets were being changed so restless audience members wouldn’t leave the theater for other pleasures the sybaritic city of Naples offered then as now. Derived from the commedia dell’arte tradition, which was still vital at the time, they were low comedies with lots of slapstick. If you like Marx brothers comedies, you should like Pergolesi’s little trifles – they belong to the same tradition. It was nice to laugh while taking in the glorious singing, lively acting and transparent instrumental work BEMF productions are known for.

Pergolesi, who was born in 1710 wouldn’t have made the so-called “27 Club” of Pop musicians like Jimi Hendrix, Janis Joplin, Kurt Cobain and Amy Winehouse, who died during their 27th year. He died at 26, not of a drug overdose like most of our tragic artists, but of tuberculosis, one of the many scourges of his day. He produced religious works – his “Stabat Mater” is best-remembered - and serious three-act operas, but in the operatic field his most enduring works are the two comic intermission features the BEMF semi-staged this past weekend. “La serva padrona” and “Livietta e Tracollo” are ideal subjects for semi-staging because they were semi-staged in the original. Produced in front of the curtain while the sets were being changed, they featured minimal sets and a small orchestra, which is just the way the BEMF did it at Jordan Hall.

In his two intermezzi, Pergolesi’s lightness and lyricism was received as a tonic compared to the heavy opera seria that dominated Neapolitan theaters. In the visual arts, his music is reminiscent of his dreamy French near-contemporary Jean Antoine Watteau (1684-1721) but perhaps more pertinently of the Neapolitan Bernardo Cavallino (1622-1654), whose works exude an ineffable sweetness. (The MFA has a charming picture by him of Saint Cecilia creating celestial music on a violin.)

Pergolesi’s intermezzi could easily be dismissed as little nothings because they were, but they turned out to be international hits that were performed all over the western world (“La serva padrona” ’s American premiere was in Baltimore in 1790!). Their lightness along with the sweetness of Pergolesi’s undeniable melodic gift ensured their success. Indeed, “Serva” became the centerpiece of a debate that divided Paris’s opera lovers into two rival camps. The King’s Party favored the serious tragédie-lyrique of Lully and Rameau while the Queen’s Party championed the light and transparent, simple but sophisticated Italian style exemplified by Pergolesi’s little bon-bon. The Querelle des Bouffons (the Quarrel of the Comic Actors) raged for a couple of years, drawing the philosopher Jean-Jacques Rousseau into the debate, leading him to write an intermezzo of his own. That the affair started in 1752, 16 years after Pergolesi’s death, would probably have confounded him. Why did no one care about “Il prigioner superbo,” the opera seria “Serva” served only to fill in during set-changes? (Maybe the BEMF could revive one of Pergolesi’s serious operas in the future during its biennial festival when it mounts fully staged uncut operas. But maybe there’s a reason they have never been restaged since their premieres.)

There’s no need to waste time recounting the plots of the two intermezzi. Both of them feature wily female characters that get their way in the end. (That is a tradition in Italian comedy that is perhaps most persuasively developed in Rossini’s infectious “L’italiana in Algeri” (The Italian Girl in Algiers), which the Boston Conservatory presented with a student cast to general delight a couple of weeks ago.) In “Serva,” Serpina, the maid of the passive Uberto, mistreats him egregiously, but eventually gets him to marry her. In “Livietta e Tracollo,” the story is more complicated, but it boils down to Livietta getting Tracollo, a highwayman not above cross-dressing (as a Polish woman), to give up his unlawful ways to marry her.

The most controversial decision stage director Gilbert Blin made was to present the two works together, one episode of “Serva” followed by one of “Livietta.” I remain of mixed feelings about his move.

There is precedent for the fragmentation. Originally, each of the short works – each about 45 minutes long – was presented in two parts during each of the two intermissions of the serious operas they were relieving like a sorbet between courses of a heavy meal. Breaking each 20 minute plus segment into 10 minute-long scenes doesn’t do real violence to the originals – you don’t have time to forget what transpired before the characters return again. But when Livietta and Tracollo suddenly appear in the middle of Serpina’s insubordination – she has made her boss wait three hours for his breakfast hot chocolate! – it is confusing to anyone who hasn’t thoroughly read the program notes, which would include this critic. (Me bad.)

Blin’s choice nicely undescores the parallels between the two works, and it ends with two weddings – the goal of all comedies. What’s more it avoids the problem of following “Serva,” which remains a delight nearly 300 years after it was written, with “Livietta,” which is a pleasure of a lesser order. Still, the switching back and forth between two very different works proved disconcerting and confusing. What was gained by their forced marriage was equaled by what was lost.

Of course, the cast of singing (and silent) actors the BEMF has cultivated and the crack band led by concertmaster Robert Mealy made the whole enterprise come to vibrant life.

What can I say? There is no greater pleasure in opera in Boston than hearing soprano Amanda Forsythe and bass-baritone Douglas Williams perform, and fortunately, we get to hear them fairly regularly. Forsythe, a foxy performer, has shown a comic side before. (She seems not to be able to resist.) Williams less so, although the very first time I heard him during a BEMF biennial festival final night performance of Tragicomedia, he and tenor Aaron Sheehan sang a madrigal of two drunken bro’s that was, uh, intoxicating. Both Forsythe and Williams showed their comic chops as Serpina and Uberto. Williams, who is tall and lanky, sported a pillow to make him look like the portly mayor of the village to great comic effect. His close-cropped hair helped make the scene when Serpina forces him to try on one wig after another all the more amusing. Vocally, they were non-pareil. Forsythe, with a silvery but embodied voice that makes you melt when she wants you to, was like a fish to water in the role of Serpina, moving from shrew to seductress on a dime. Williams, whose rich, expressive bass-baritone is flexible and even capable of almost counter-tenor highs, sang ravishingly as the stodgy Uberto. It’s no surprise that the two of them have in a few short years forged careers in major international houses.

In “Livietta e Tracollo,” baritone Jesse Blumberg outdid himself as the easily domesticated outlaw Tracollo. Singing throughout with beauty of tone, he showed a gift for comic acting, singing in faux-Polish Italian dialect (?) as a pregnant Polish beggar using his wiles to lift jewelry from the sleeping Livietta. In the second act, on the run from the law, he disguised himself as a ditzy astrologer, finally unmasked by the resourceful Livietta. As Livietta, Erica Schuller had a lovely light soprano and showed great comic instincts.

For both intermezzi, silent actors and dancers, particularly Carlos Fittante as Vespone, a Harlequin figure, in “Serva,” filled out the action. A particular non-musical delight was choreographer Melinda Sullivan and stage director Gilbert Blin as two elders stiffly dancing at each end of the stage. Details like helped make the evening (well, afternoon in my case) such a pleasure.

This June, the BEMF is planning its most ambitious biennial festival in its history, mounting all three of Claudio Monteverdi’s intact operas, two of them repeats from previous seasons, one, “Il ritorno di Ulisse in Patria” (Ulysses’ Return to his Country), new. Based on past experiences, I’m sure they will be great, but I’m looking beyond it to next Thanksgiving weekend. The BEMF’s chamber operas are, for me at least, its greatest achievements. I can’t wait to hear what they will do.