Puss Kicks Up His Boot in Gotham 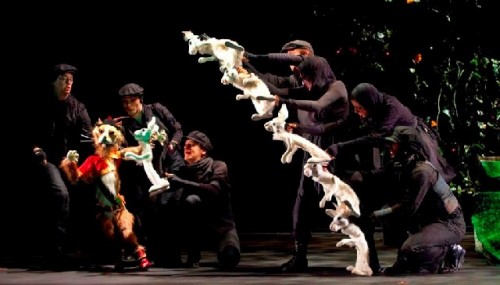 Rabbits Fit for a King 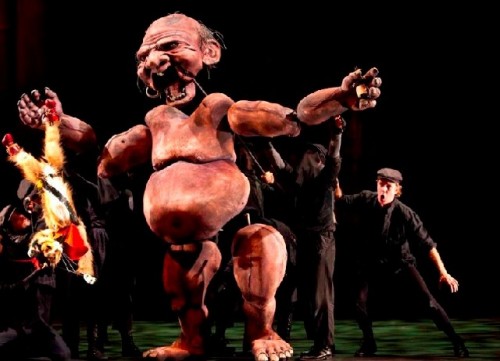 How to Out-Cat a Bully 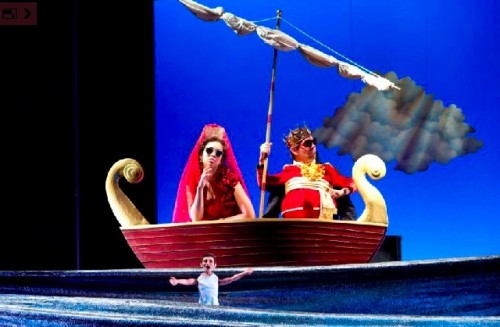 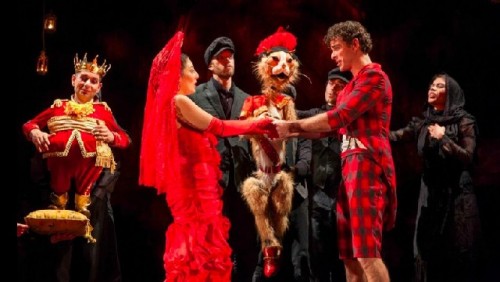 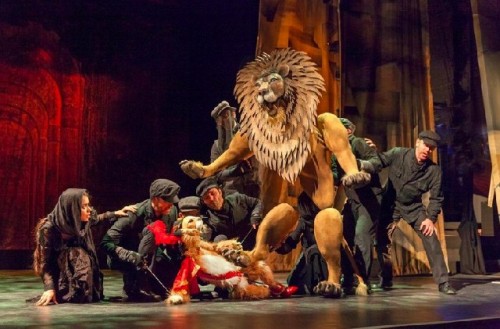 What Would a Lion Do with a Cat?

Puppets double up the convention of opera. You come to accept people singing their way through life when an opera hall darkens, In the Gotham production, puppeteers dressed in black move the puppets. The voice of Gato is sung by Ginger Costa-Jackson (alternating with Kerin Mushegain). She is also dressed in black and when she gives voice to Gato, touches the shoulder of a puppeteer. But like opera where we accept the fact that talking is done in music, in this form of shadow puppetry, we immediately accept the convention of a puppeteer singing for the puppet.

All eyes are fixed on El Gato, as he virtually vibrates when his slender body is filled with song. Manipulated by three puppeteers, he is a slithering, prancing manipulator himself, entrancing as he bounds across the stage fixing the world to his vision.

Puss in Boots is an old tale which holds two morals. One that dress and countenance can carry you far. Puss is a living example. He dons hat and cape and boots and becomes a courtier.

Boots carry Puss from the home of a poor peasant miller to the castle of a King where Puss lays the groundwork for the marriage of miller peasant to Princess.

In a particularly delightful water scene where Designer Andromache Chalfant has looped shimmering chiffon-like material across the stage and David Lander has lit so the illusion of water rushing by is created, the peasant now billed as prince appears to be drowning. In the process, he turns from a real man to a puppet in a flash and we accept without blinking an eye this clever miniaturization.

The puppeteers also double with figures in which the real human head and arms are used. For a moment, it appears that a designer has done an extraordinary job of duplicating human with limbs. But in a moment you smile when you see that the King is, well, a man. Stephanos Koreasons is regal.

Andrea Carroll as the princess sings with verve and seductive pleasure. Dressed for a hot Spanish night, she plunges into water and emerges in a bathing suit, dropping her skirt so to speak.

Craig Vern has a rich voice as the Miller who would be Prince. Kevin Burdette is appropriately terrifying as the Ogre who is eventually tricked by the cat. No revelations here. But the Ogre lives in a castle which the miller is able to appropriate.

The puppeteers, mostly in shadow, each deserve a mention. They create a satisfying and thrilling illusion. Sometimes even terrifying in the Ogre.

Montsalvatge’s score gets a brisk and amusing presentation under Neal Goren’s baton. Goren’s mission with the Gotham Chamber Opera is to present operas that fit an intimate setting. In the beautiful theatre at El Museo del Barrio, just such a purpose is served.

Talent on stage has appeared all over the United States in opera companies that thrive not only in Seattle and Houston, but Utah, San Luis Obispo, and Santa Barbara. New York is often myopic about opera opportunities because our news is dominated by a stodgy house that is too large and often half empty.

In the hands of artistic directors like Goren, small opera thrives. Puss’s second moral message is delivered. Industry and savoir faire can triumph on stage.