Glass and Next Generation 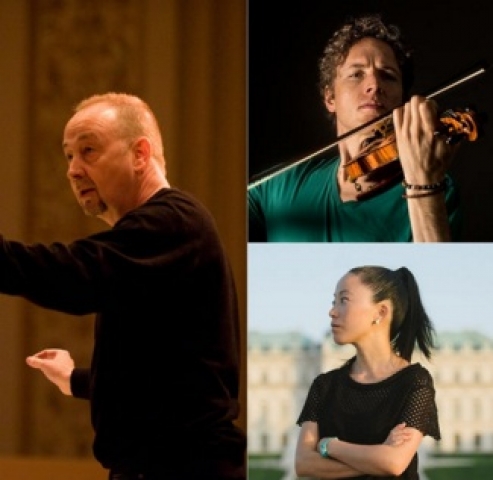 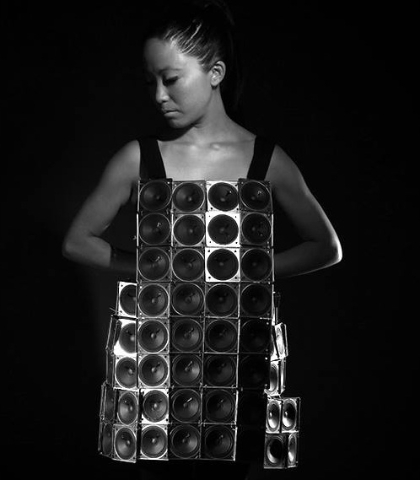 Pauchi Sasaki in her sounding body dress. She started experimenting with an electronic violin she made, pre-programming the sensors based on her movements. "There's something tricky about wearables and electricity...in the first performance, I burned my hair." 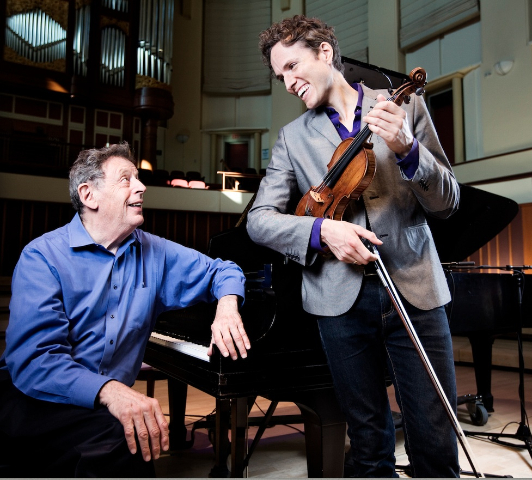 American Composers Orchestra performs at Carnegie Hall each year. Their December 8 concert at Zankel Hall was the first to honor the holder of the Debs Composer’s Chair this season, Philip Glass.

Glass has been busy. He is a mentor in the Rolex Mentor and Protégé program. The composer has recently observed, assessed, modeled and guided Pauchi Sasaki, who is forging a new relationship between artists and technology.

Sasaki was introduced by Claire Chase at The Kitchen in 2016 where both women wore interactive electronic garb created by Sasaki. Both women are known for physical performances on their instruments. "I always wondered, "Sasaki has said, "how it would feel to become the sound." The dress, which reportedly has 100 speakers built in, picked up Sasaki's whispers, chirps and clicks at Zankel. It is a venturesome moment in music and expands its emotional range.

During the first movement, Sasaki sat on the stairs at the left of the hall, as a spotlight gradually revealed her and she made her way down the steps and then up onto the stage for the second movement. Swings between sweet glissandos and firm, louder statements entranced. The sounds emitted are hardly the usual orchestral fare, yet they are beguiling.

Sasaki joined the orchestra already performing the more conventional portion of the work, conventional that is in its instruments, which the composer succeeds in bringing to life with harmony and dissonance. The tentative sounds which start the composition now are stabilized, louder and more harmonic.

This novel effort to forge technology into musical shape is more than a gimmick. The music that emerges is eye-catching as well as inviting. Projections on the rear wall of the stage were like vertical sound refractions and added to the visual pleasure of listening. Yet if projections are used more frequently in the Hall, Carnegie might consider a temporary surface which is smoother. In the performance of Glass’s Violin Concerto No. 2, a take on Vivaldi’s seasons, the projections were either unintentionally hallucinatory, or the audience was zonked by the end of the evening, after listening to the thrilling concerto whose seasons are evocatively undefined.

Bryce Dessner’s Réponse Lutoslawski emerged from his study of Witold Lutoslawski’s string orchestra piece Musique funèbre.  Dessner writes: "I spent months studying...the work as well as many of his other pieces. This was an amazing process...(allowed) his adventurous spirit to influence my own musical decisions...I like to think that his music...pushed open a door, through which I could then pass and take my journey with the music."  His work was performed with haunting beauty by the American Composers Orchestra conducted by George Manahan.

The Glass Violin Concerto got an arresting performance, crowned by Tim Fain, an incredible artist who drew us in with the prelude and then three songs on violin which begin each movement. This 2009 piece is as fresh as the sunflower tucked in a projection stage right.

The composition uses the small Vivaldi string orchestra to which a synthesizer has been added.  Often it sounds like a baroque harpsichord.  The furious tuttis are also familiar from Vivaldi's Seasons. Yet the piece is very much Glass, with pulsing rhythms and tender lyricism, always driven and driving us along with it.  The conclusion here is furious.  The fabulous artist Fain captures it all.

Glass in discussion with Dessner maintains that he does not particularly think about what he is doing or about to do. He keeps the work he is working on front and center. This may give the present feel to pieces composed decades ago. Certainly the light references to a Vivaldi composition, which is so familiar that it is almost overused, takes new colors and sounds. The impact of this Glass work can not be underestimated.

Glass and Sasaki talked with Edward Yim, President and CEO of the American Composers Orchestra at the conclusion of the program. Glass was modest and funny as he claimed that he had never been much of a mentor to himself so he could not have imagined that Sasaki benefited much. She, however, said that after overcoming her sense that this was not happening to her, she learned from accompanying Glass on tour. She benefited from the musicians and technical experts he introduced to her.

The music was beautiful this evening, not to diminish in any way the composers' accomplishment.  This lively program bodes well for the future.