A Mix of Music and Arts 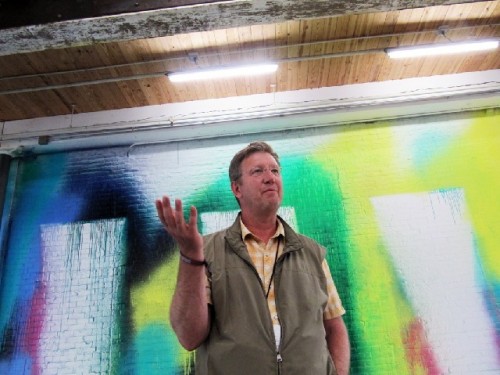 (North Adams, Massachusetts) MASS MoCA'sWinter/Spring season will include performances by honky-tonk hero Justin Townes Earle and jazz and blues singer Catherine Russell with her honey-dipped alto voice, bands like Zammuto (founded by "collage music specialist" Nick Zammuto of The Books), and dance troupes like Chunky Move with their arresting choreography and astonishing virtuosity. The very popular annual FREE day returns, followed by a Synth Funk Dance Party with Gordon Voidwell, and MASS MoCA presents two work-in-progress showings:  in April a theater piece from three-time Obie Award-winning writer/director/actor Ain Gordon and in May a new opera from young composer Paola Prestini and vocalist and performance artist Helga Davis.  In the galleries the new exhibition Sanford Biggers: The Cartographer's Conundrum will open on February 5, while the group exhibition Invisible Cities debuts on April 15.  Series offered this season will include the exciting Alt Cabaret which features music and dance and MASS MoCA's Thursday night Cinema Lounge series, titled Strategic Thinking, with four films most followed by Q&As with filmmakers.

February is filled with music.  The main stage season in MASS MoCA's Hunter Center starts on February 3, 2012, with a concert by Zammuto and a screening of the short film Achante, for which Nick Zammuto composed the score.  Zammuto, of local favorite The Books, debuts his hotly anticipated new band with this performance.  Capping off MASS MoCA's annual Free Day, the Hunter Center becomes an over-the-top dance club on February 11 with a Synth Funk Dance Party with Gordon Voidwell who cooks up a subversive mix of pop, new wave and funk that sounds like a futuristic three-way between Prince, Tom Tom Club, and George Clinton. Talented jazz singer Catherine Russell takes the stage on February 18. She performed to a sold-out house at MASS MoCA in 2007.  A concert with Morgan Taylor and his animated sidekick Gustafer Yellowgold (who comes from the sun) on Saturday, February 25, will delight people of all ages.

March is bookended by two major events.  First, on March 10, Justin Townes Earle (son of Steve Earle who sold out MASS MoCA in 2006) and his band perform his utterly distinctive music which ranges from ragtime to punk anthems.  At the end of the month, with new artistic director Anouk Van Dijk at the helm, Chunky Move (termed Australia's "biggest and most successful contemporary dance export" by the Edinburgh International Festival) comes to North Adams for two performances on March 24 and 25. This performance is in collaboration with Jacob's Pillow and supported by the Irene Hunter Fund for Dance at MASS MoCA in association with Jacob's Pillow.

MASS MoCA's celebrated Alt Cabaret series presents emerging and established artists in different disciplines. All shows start at 8 PM in Club B-10 and dinner and snacks from Lickety Split and drinks from the MASS MoCA Bar will be available before and during the show. Tickets are $12 advance/$16 day of show/$10 students. The series is sponsored by the Hans & Kate Morris Fund for New Music.

First on January 14, local musicians Jeff & Jane Hudson take the stage.  In the '80s, this pioneering electronic music duo fuzzed out the lines between synth pop and the raging guitars of post-punk to devastating effect. ModERIN a unique blend of traditional Irish step and contemporary modern dance comes to North Adams on January 21 when Darrah Carr Dance takes the stage.   On March 3, the wildly energetic and uplifting instrumental indie rock band Delicate Steve takes the Club B-10 stage. Music lovers can celebrate St. Patrick's Day on March 16 with Belfast's McPeake who carries on a family tradition of Irish folk music that goes back 100 years, while on April 14 the talented singer and multi-instrumentalist Emily King performs her gentle mix of soul, folk and rock that recalls the kind of evocative, straight-to-the- point storytelling that's reminiscent of the great singer/songwriters of the 1970's. The Alt Cab series wraps up on April 21 with long-time vocalist with the SNL Band, Christine Ohlman performing her incendiary blues- and soul-tinged music with her band Rebel Montez.

MASS MoCA has become one of the country's prime incubators of new work for performing artists, having given such artists as Laurie Anderson, Basil Twist, and Cynthia Hopkins space, time, production support and the opportunity to present works-in-progress in front of a live audience.  Work-in-progress showings are followed by Q&As during which patrons can offer their thoughts, learn more about the work, and become a part of the creative process. April 28 features a showing of Ain Gordon's Not What Happened, a contrapuntal duet for two people who can't meet: the historical re-enactor and the figure she re-enact questions the politics of historical re-enactment.  A multimedia opera by Paola Prestini starring Helga Davis called Oceanic Verses is on tap for May 18. The piece follows four separate arcs musically painting a picture of Italy as it once was, a cross section of cultures expressed through song.

This season's Cinema Lounge documentary film series is titled Strategic Thinking and celebrates people whose unconventional and irrepressible approach in the face of various injustices have led to extraordinary achievements. All films are shown on Thursday nights at 7:30 PM in Club B-10 with snacks and drinks available before and during the screening. Many are followed by Q&As with the filmmakers.  The schedule is: Crime After Crime on January 26, The Loving Story on February 16, Sing Your Song on March 1, and Koran By Heart on April 19.

February will be a great month to see new work in the galleries. On February 5, The Cartographer's Conundrum a new major multi-disciplinary installation in Building 5 by Sanford Biggers, opens. Inspired by artist, scholar, and Afrofuturist John Biggers (a cousin of the artist) the exhibition will both study and expand the emerging genre of Afrofuturism. New Work by Anna Betbeze is on view starting Wednesday, February 8, and visitors can see Making Room: The Space Between Two and Three Dimensions starting Saturday, February 25.  Later in the season, on April 15, Invisible Cities opens. In this group show, ten artists imagine both real and fantastic cities exploring how our perceptions of place are colored by memory, desire, history, and loss.  Opening receptions for the Biggers exhibition and Invisible Cities will take place from 5:30 - 7:30 PM on February 4 and April 14, respectively.  These celebrations are free for members and $8 for not-yet-members.   Major support for The Cartographer's Conundrum is provided by The Andy Warhol Foundation for the Visual Arts, with additional support from the National Endowment for the Arts, Toby D. Lewis Philanthropic Fund of the Jewish Community Federation of Cleveland, and the Massachusetts Cultural Council, a state agency. Invisible Cities is supported in part by the Massachusetts Cultural Council, a state agency.

With Under the Sea continuing, Kidspace fans should look for a Mermaid Parade during FREE Day on February 11 and a fun and affordable art camp during the Presidents' Week holiday (February 20-24).

Tickets for all events are available through the MASS MoCA Box Office located off Marshall Street in North Adams, open from 11 A.M. until 5 P.M., closed Tuesdays.  Tickets can also be charged by phone by calling 413.662.2111 during Box Office hours or purchased on line at www.massmoca.org.

MASS MoCA, the largest center for contemporary visual and performing arts in the United States, is located off Marshall Street in North Adams on a 13-acre campus of renovated 19th-century factory buildings.  MASS MoCA is an independent 501c(3) whose operations and programming are funded through admissions and commercial lease revenue, corporate and foundation grants, and individual philanthropy.  Except for an initial construction grant from the Commonwealth, and competitive program and operations grants from the National Endowment for the Arts and the Massachusetts Cultural Council, MASS MoCA is privately funded: 90% of annual operating revenues are from earned revenues, membership support, and private gifts and grants.