Beer and Burgers with Denise Marika 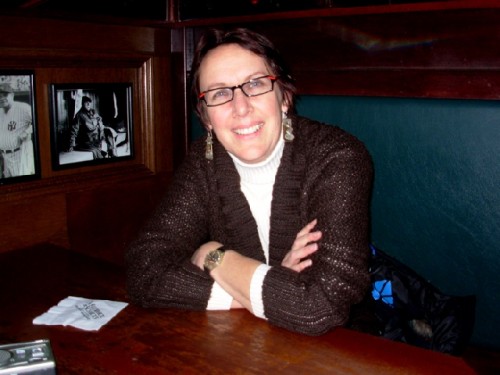 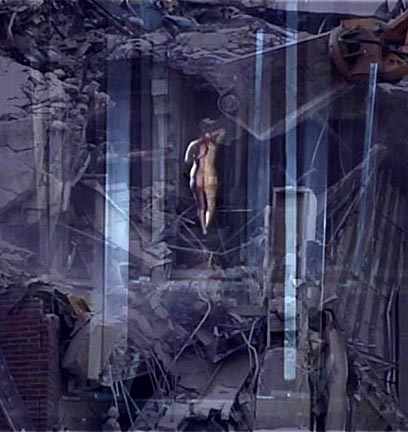 A scene from "Orpheus" at the American Repertory Theatre. All images copyright and courtesy of the artist. 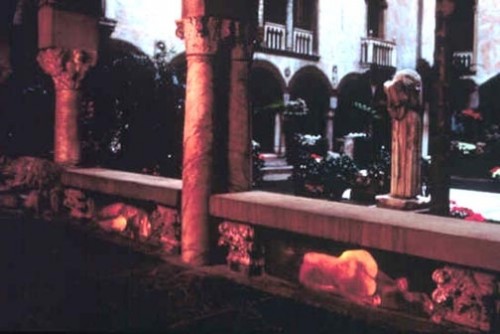 An installation at the Isabella Stewart Gardner Museum. 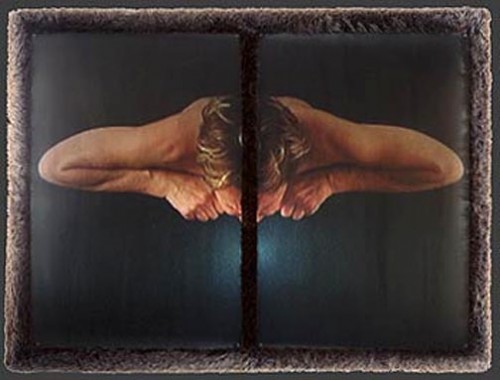 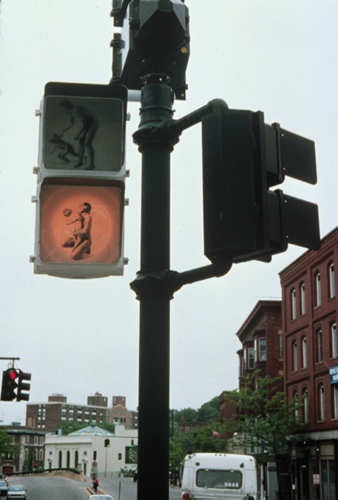 In "Crossing" a traffic signal was reconfigured. 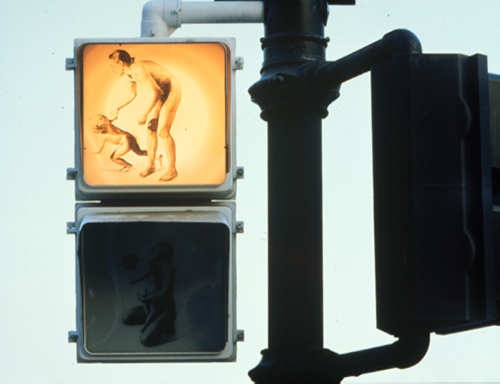 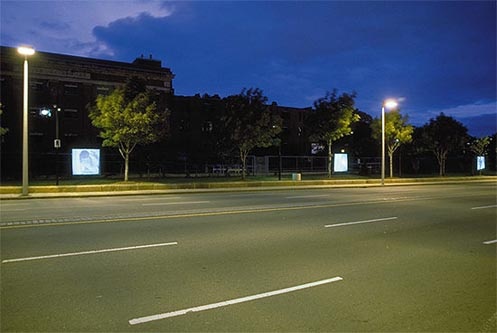 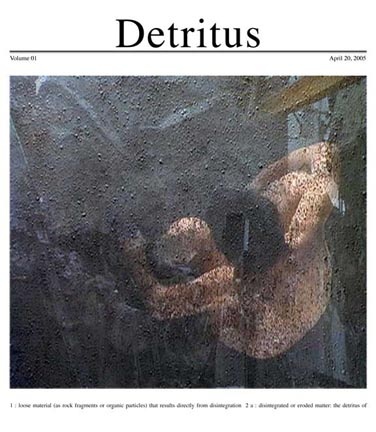 The cover of the weekly "Dig" with a portfolio from "Detritus." 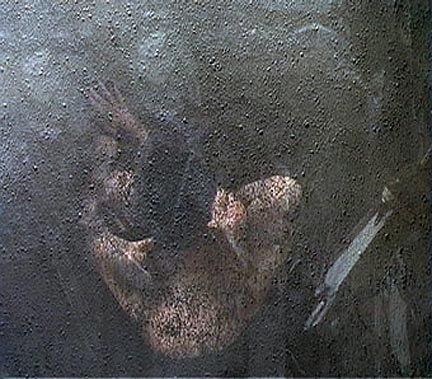 A detail from "Detritus." 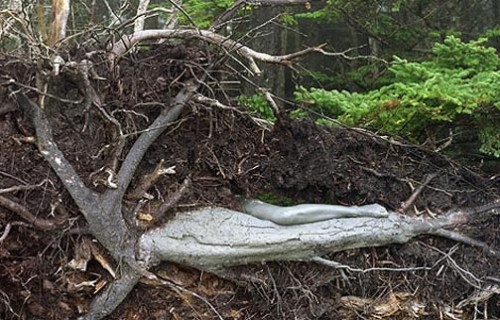 In "Leg" the body element is assimilated into nature. 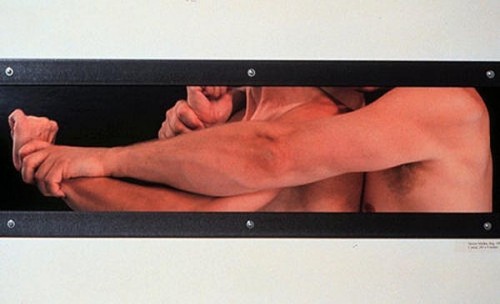 A detail of "Hug" that conveys a human struggle. 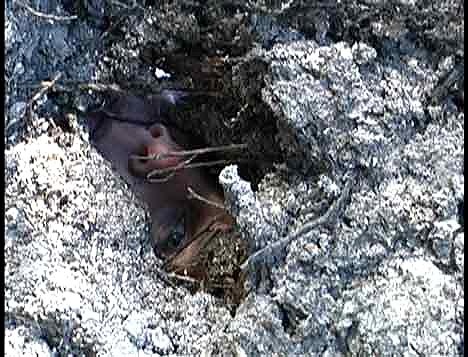 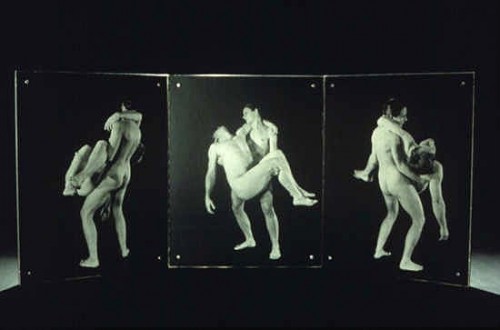 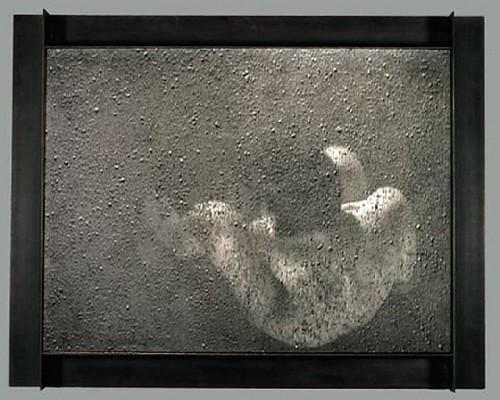 The body work, video installations of  Denise Marika have been regularly exhibited at the Howard Yezerski Gallery, and in site specific installations at the Isabella Stewart Gardner Museum, Mass MoCA, Institute of Contemporary Art, Boston, the Worcester Art Museum, the Rose Art Museum, the DeCordova Museum and the Museum of Modern Art. But in the past year the artist has been working in the theatre. In 2006, she collaborated with Robert Woodruff and Rinde Eckert to make a music-theatre piece "Orpheus X" for American Repertory Theatre where she co designed the set with David Zinn.

Because her body work in video/ installation has long involved elements of tasking, physical challenge, mythology and humanistic struggle it is a natural evolution that she has been approached to bring her creativity to the theatre. She sees this as a challenge and opportunity to break out of the white cube, her term for a gallery, and reach new audiences. Because of the self referential, female, nude aspect of most of her work there have been limited opportunities, because of censorship, to make public art. There have been exceptions such as a 1994 residence and installation for the Gardner Museum when the contemporary program was curated by the current Institute of Contemporary Art director, Jill Medvedow. Narrow horizontal projections were created for the bottoms of stone Romanesque benches in the museum's courtyard.

But, overall, while she has enjoyed consistent critical acclaim and several museums have acquired major pieces, she has endured the "bumps in the road" or what she described with some exasperation as "life" in the pursuit of just doing the work. When we met recently for a beer and burger, however, she seemed to be in a good place both personally and with the work. Although I had respected, followed, but not always understood the work this was the first time that we came face to face. Some time back she contacted me by e mail in response to my writing. That began a correspondence that resulted in the interview. Sometimes you come to the work and artists circuitously. It may take years to feel in touch with or comfortable enough to approach the issues. Frankly it had been a tough process and I blurted out that my past reviews were not always favorable. The "Detritus" show in 2004 at Yezerski seemed too much just that. Although I respected the seriousness of the effort, which entailed large stacks of a weekly arts tabloid that contained a portfolio of images, video and other "trashy" elements it just didn't make sense to me.

With a laugh she stated that she hadn't read that review but added that it wouldn't make a difference. That she would rather have a tough critical commentary than bland praise or just description. One of the difficult aspects of being in the arts is that we make our mistakes in a public. For a critic good, bad, or indifferent it is all on the record. The challenge is  to get it right the first time. And try to be willing to rethink initial or evolving opinions. Art criticism is a constant process of reevaluation. There is a sensuality and humanity that both attracted and puzzled me about the artist and her work.

About half way through our dialogue when I broached the issues of a woman of a certain age at mid career she just laughed. "I wondered when you would get to that." Marika went on to state that it is all a fiction created by critics and curators. The term "mid career" is a convenient means of denigrating and marginalizing artists. It is a designation that has nothing to do with the reality of where someone might be in their life and work.  Bravely, I asked her age. "What does it matter" she replied. "I'll tell mine if you tell yours," I said and explained that it was about "Passages." Those moments and phases of life that define where we hope and expect to be.  I described being in the "legacy" phase of my career wondering whether any of it makes sense or has a lasting impact.

"I'm not there yet," she responded. Instead she described a phase of life where she is enjoying a lot of freedom and expanded possibilities. As a  single mother with two kids, son and daughter, in college she is now able to pursue opportunities, particularly residencies, or just work all night if she wants to. Not like years of long and intense days in the studio and then knocking off to put dinner on the table.

"I've had enough bumps along the way to really appreciate where I am today," she said. "I went to MacDowell for the first time only a few years ago relatively late in my career. When they delivered that basket (lunch) the first day I just cried. Oh my God. Somebody cared about what I do. I can work undisturbed and they'll feed me. When you put your work out there you really don't know if it matters. It's an amazing place and I hope to go back. When I went for the first time I didn't quite know what I would do. You have to apply with a project but you might spend time doing research. In four weeks I accomplished about eight or nine months worth of work. I produced what became 'Bisected' and other work."

Just what should one know about the work today I asked? "My work still involves the body but there are more theatre and collaborative elements," she said. "I have gone from relationships and individuals with their power struggles to concerns with individuals as symbols of others in a broader world. I am frustrated on a lot of levels with what is going on politically and need to address that more while not making outright political images."

She started to discuss "Downrush" a work related to the theatre piece for Brandeis but became concerned about being too explicit and ruining the element of surprise when it is performed. For that reason she had posted but then removed images from her website. She wondered if talking about it in this space would ruin it for viewers. I assured her that she greatly overestimated the extent of my readers. So we retraced to how and why she was doing theatre work. "I wanted a broader audience," she said. "And a broader palette for my work and what it addresses. It is also a way of getting me out of the white box. I have pretty much been relegated to those spaces but every so often I get the chance to do a site specific piece. I like the dialogue with architecture and space in the work. Also I wanted a more public audience."

There seems to be a lot of stress and pain in the work I have seen. The nude artist is viewed grunting and groaning through demanding physical tasks. I suggested that they are conceptual art equivalents of "Jane Fonda workout tapes for masochists." She relates it to the notion of mythology which often has themes of difficult if not impossible tasks, or loss, and what we learn from that. "In Orpheus (the A.R.T. piece last season) he looses her and wants her back," she said. "And the new piece Icarus involves the ultimate loss, the fall. My work is not comfortable. My new work is not about self torture and pitting yourself against the impossible. In 'Downrush' I shot it outdoors against a large set of wooden steps. A wrapped funereal figure tumbles down toward the camera."

Just how did she come to the theme of the body in her work? "I like challenges," she said. "As an undergraduate I started in ceramics and sculpture and went on to marble and harder stone like granite. I also learned to weld steel. When I got to graduate school I felt that these materials did not speak to our time."

In the graduate program at U.C.L.A. the professors Chris Burden and Charles Ray, for whom she worked as a T.A., had an enormous influence. They were both ending the earlier phase of body/ performance and starting to create conceptual sculpture works. "I was moving toward the use of video and the body in action," she said. "Chris would be really quiet and then say something stunning and dead on. He and Charlie were great teachers and Nancy Rubins was also there. Chris made a giant container as a vat for concrete. He was throwing steel I beams off the roof of the building into the concrete vat. We were standing just a couple of feet from the target and were so involved that it never occurred to us that he might miss." Unlike Burden, however, she never has done live performances. "I'm not interested in that relationship with the audience. I want the viewer to insert themselves into my place." She describes the teaching and program at U.C.L.A at that time as very different from the approach of John Baldessari at CalArt which was more careerist, conceptual and Marxist.

Why Boston we asked? Can one have a career here and how did she view the fact that the four finalists for the Foster Award at the ICA are female? And that the majority of prior ICA Award winners were also female. "It's about time," was her not very surprising response. But she cautioned that it would be a mistake to assume that there is widespread acceptance of women in the upper levels of the art world. She grew up in New York and didn't want to return there. She describes Boston as a great place to work with a supportive community of artists and galleries. Her role as a half time professor at Mass. College of Art is very fulfilling. "But you have to be realistic and continue to make your own outreach nationally and internationally." And that "you take a hit for living here." Exactly.