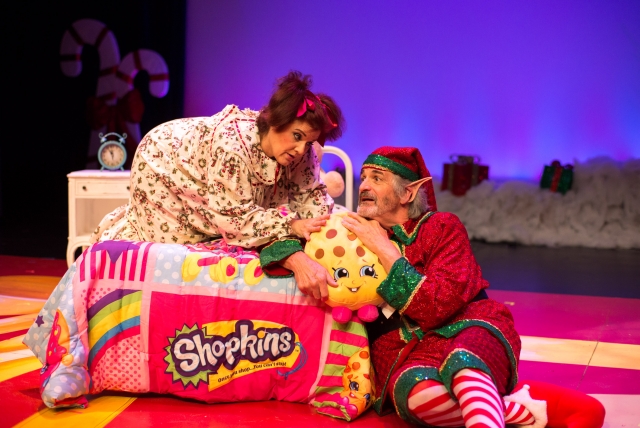 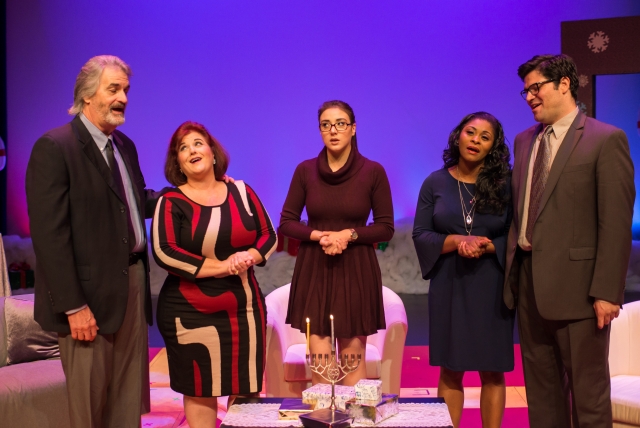 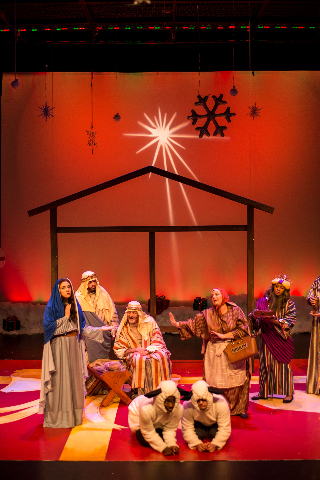 (Photo by Justin Namon) The ensemble in Oy Vey Maria

Oy Vey Maria is anything but your typical school Christmas pageant.

It’s one of the most thoughtful, smartly-written and inventive holiday plays you’re likely to see.

The Miracle of Chanukah, meanwhile, is not normally the kind of “Yuletide” fare live theater audiences witness in November and December. Many theatergoers are used to seeing countless iterations of A Christmas Carol. A Christmas Story is also a seasonal staple. There just aren’t that many well-known stories about other December holidays written for the stage or the screen.

So it’s refreshing to take in a diverse line-up of short plays for City Theatre’s Winter Shorts. The annual theatrical tradition in Miami is dubbed “America’s Short Play Winter Festival."

The plays, some world premieres, some area primers, are diverse. They're varied not only because they deal with Chanukah and Christmas, but other winter holidays, such as Valentine’s Day and New Year’s Eve.

Promotional material further describes Winter Shorts as “an evening of theater filled with hilarity, both naughty and nice.” We might add that this year’s line-up includes hilarity that’s sarcastic and dark. While we’re at it, we should add the talented playwrights who’ve contributed to this year’s Winter Shorts write cleverly, with a keen ear for the way people speak and a knack for pulling the unexpected on us.

Theatergoers smart enough to treat themselves to Winter Shorts will discover the unforeseen in plays such as Becky’s Christmas Wish by Ashley Lauren Rogers.

The work, directed with playfulness and energy by Margaret M. Ledford, starts simple: A jolly elf arrives in a little girl’s home with instructions from Santa: Grant “the best little boy or girl in the world,” as deemed by Santa, one special wish. But in this dark comedy, the insistent, spoiled 10-year-old Becky’s wish is hardly in the spirit of Christmas. What the elf ends up doing is a mistake – a shocker that will cause you to laugh with little control, while squirming in your seat. Curiously, 10-year-old Becky uses the word “rescind.” It’s a stretch to think such a word falls within a 10-year-old’s vocabulary. That is, unless she’s the second-coming of Matilda, perhaps.

Award-winning actress Margot Moreland nails the whiny, stubborn voice of a child. The performer making us forget we’re watching an adult play the part. As the pointy-eared Elf, redolent in green and red garb (award- winner Ellis Tillman designed the colorful, diverse and character-defining costumes), Dave Corey switches seamlessly from a sprightly demeanor to one of exasperation.

You can imagine the frustration poor Ann feels in Oy Vey Maria (a play on “Ave Maria”). “Oy vey,” by the way, is a Yiddish expression conveying grief or dismay.

What’s the grandmother of Jesus to do, after all, when she’s left out of the celebration surrounding the birth of her grandson? Ann, who is Mary’s mother, is the stereotypical Jewish mother. She brings food for every occasion. She speaks in a sing-songy voice, beginning in a lower key and ending on a higher note.

“You think I wouldn’t be here when my own baby gives birth?” she asks. “Your own mother you don’t want here, but now you’re entertaining?”

With Oy Vey Maria, playwright Mark Harvey Levine has, in a delightfully creative way, played up the Jewishness of Jesus. He has done so in a way that extends beyond the image of him as “King of the Jews.” The play contains plenty of playful humor. Some of it will, no doubt, particularly delight Jewish audience members. But anyone who’s experienced a certain type of mother-daughter relationship that’s a combination of loving, familiar, strained and annoying will nod with laughter.

Leading the play’s fine cast are Moreland as a stereotypical Jewish mother. She sounds at times like a younger Yente the Matchmaker from Fiddler on the Roof. Moreland, who disappears into her roles, understands this is a spoof. When her character feels left out of the birth celebration, Moreland invests Jesus’ grandmother with an exaggerated sense of emotional pain. Think Albert Peterson’s mother in Bye Bye Birdie.

A play with an even more Jewish flavor is The Miracle of Chanukah, by Sheri Wilner and directed with sensitivity by Deborah Kondelik. It centers on a Jewish family with a unique way of celebrating the holiday. In a custom that might call to mind the Thanksgiving table, everyone takes their turn describing a miracle they’ve experienced since the previous year’s Chanukah celebration.

One particularly heartfelt, emotional experience might cause tears to roll down your cheeks. Award-winning performer Rita Joe tells her character’s tale with a touching sincerity and a familiarity. Joe does so in a way that will make you believe the “miracle” happened just yesterday. The play is thought-provoking: What is a miracle? Does such a thing happen? How can you recognize one? How can we explain reconcile a seeming miracle with objective reality?

Wilner displays a keen ear for the way dysfunctional, particularly Jewish families have been known to act during gatherings. Characters speak over each other, interruptions are aplenty and a cacophony of voices sometimes takes over the proceedings.

One blabbermouth is enough in Feliz Navidad. This low comic play is set in a department store featuring a frantic woman on the prowl for gifts for her young relatives. She’s harried, lugging multiple pocketbooks and seemingly in danger of hyperventilating. She’s so desperate, there’s hardly a moment for pause during her incessant rambling to a saleswoman of what she “needs.” The unexpected, again, comes into play when that salesperson (a friendly Diana Garle) finally gets the chance to talk. She hardly speaks a word of English. This only increases the stress of shopper Muriel. Moreland, who plays her, doesn’t miss a beat in the role. Feliz Navidad will certainly feel familiar to a dying, if not almost extinct breed of Miami residents: The non-Hispanic who hasn’t learned to speak Spanish.

Questions of belief, faith and the outsiders among us are some of the other topics dealt with in this year’s Winter Shorts.

The holiday spirit will envelop you as soon as you walk into theater. It is adorned with colors and decorations for the season, as part of scenic designer Jodi Dellaventura’s versatile, flexible set.

It all adds up to a fun, laugh-filled escape for a couple of hours.

Winter Shorts continues through Dec. 23 in the Carnival Studio Theater at the Adrienne Arsht Center, 1300 Biscayne Blvd. in downtown Miami. For ticket prices, times and other information, call (305) 949-6722 or visit www.arshtcenter.org.