Who Wins: The Butterfly or the Bat? 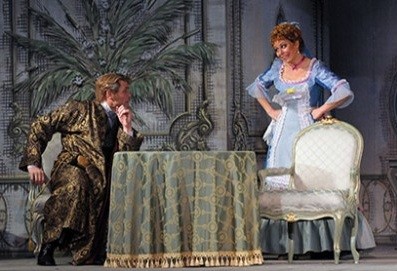 Skovhus and Banse: About to cheat on each other? 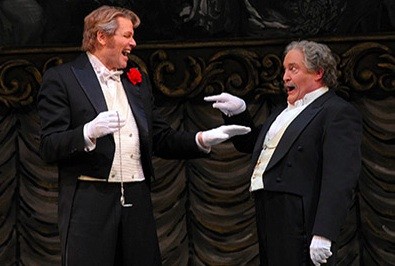 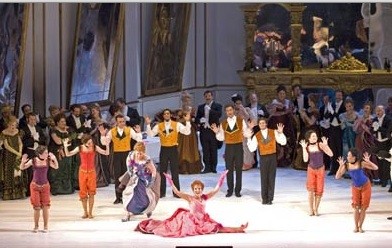 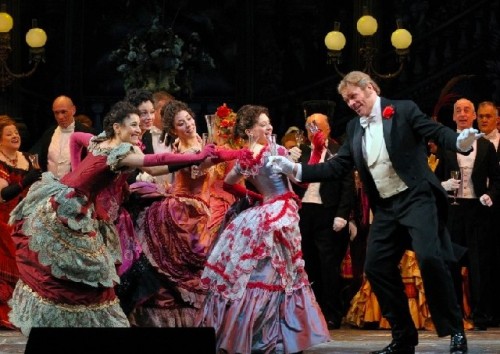 Cast members having a ball. The audience does too.

Die Fledermaus in Chicago. You never want it to end.

The megawatt talent of director E. Loren-Meeker lights up the stage in the Lyric Opera’s production of Die Fledermaus, an import from San Francisco.

Loren-Meeker mounted showcase and studio productions at Houston Grand Opera, a Hoffman for the ages at the Danny Kaye in New York and has directed at smaller opera houses around America, but she hits her stride in the big-time in the Johann Strauss, Jr. operetta, the most popular operetta of all time.

Success of this operetta is in the timing, and like the protagonist Eisenstein’s watch which spends a good deal of time hidden in décolletage, you are not aware of the exquisite timing the director has created, because its perfection is just where it should be: hidden in performance after performance of sheer delight.

The opening curtain is a program of the operetta’s first performance in Vienna in 1874.

Fresh from the continent Juliane Banse is the evening’s Rosalinde.  The opera begins with a musical joke calling attention to the tenor’s voice and her own. She had no fear. And need not have. Banse has a lovely lyric soprano, that twirls up high, dances around notes and is yearning and tender when required.  She can color her voice dark at will, and in disguise as a Hungarian countess was a tease full of wit and bravura.

She is matched step for step by Bo Skovhus as Eisenstein, an inveterate womanizer who she one-ups behind the mask of a Hungarian countess.

Skovhus began to create this role in Vienna and loves to give the feeling of improvised dialogue. Throughout the evening, you feel as though he were living it then and there.

Skovhus looked as though he were born for the role. From the moment he finds his lost shoes under the bed of the parlor maid Adele, he is off and running to capture as many ‘ballet rats’ as he can before he reports for jail.

In a Dickensian twist of the plot, Eisenstein has been betrayed by his attorney, Dr. Blind, who will fail again as he defends Rosalinda’s long time lover.  Blind is a man of fewer scruples than the anti-hero himself.  He trips down the jail steps as though he were blind. Indeed he is, and this is how it goes all evening.

John Irvin stepped in for Michael Spyres who was off in Missouri having a baby. Irvin was wonderful.  Earlier this year he stood out as Rodrigo in Otello. He is the other part of the 'attention called to singing itself' – in jail and off stage in his cell he belts out some delicious notes.  All in attendance in the jail’s lobby (an appropriate name for the final gathering of the cast) appreciate.  His profession as opera singer is noted with some derision – to the audience’s great pleasure.

Adele sung by Daniela Fally reminds one of Beverly Sills.  Not only is she bubbling over with spirit and fun, but she has a delicious voice that scampers all over the place and teases as she negotiates her way through the stealing of he mistress’s ball gown and an appearance at Count Orlovsky’s salon, where she is the star.  Fally is known as the Madonna of Opera.

Although an actor played the role of the jailer for decades, doing what we have come to know as 'a Rex Harrison', this production’s Andrew Shore has a voice and uses it with aplomb.

The sets for Act I and III are an insert into a city’s streets.  We are always aware that this seeming frivolity about class and music is in the real world, not piece of fluff as director Loren-Meeker notes.  In Act I the blue of the curtains matches the exterior sky and the interior world and that outside merge.  In Act III the jail is in brown, dim contract to the same sky in which doves now float.  Or seagulls.

Conductor Ward Stare drew a brisk and compelling performance from the Lyric Orchestra, in waltzes welcome to ballroom dancers and ice skaters as well as opera buffs.  And also in the potpourri of references to Mozart, the Marseillaise and native Hungarian folk songs, which sound a bit, more like the Folies Bergere on Strauss’ pen.

Die Fledermaus is another big step forward in the regime of Anthony Freud at the Lyric.  Freud is scouring the countryside for talented new directors who do not violate composer’s intentions and at the same time make opera present.  This is just the right place to be in negotiating the tightrope that is contemporary opera.

A perfect evening to celebrate the holiday season and the New Year.