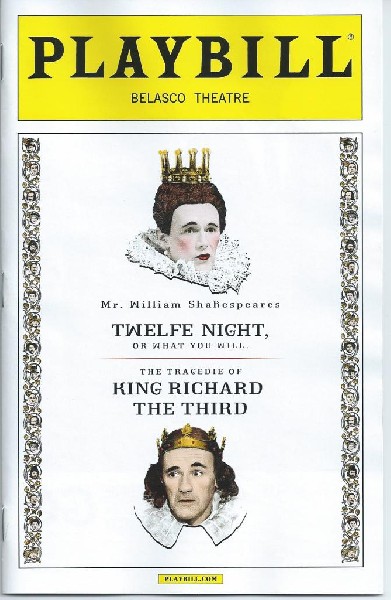 A double header for Broadway. 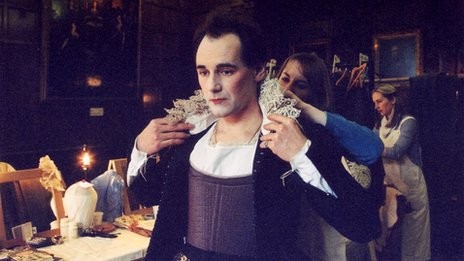 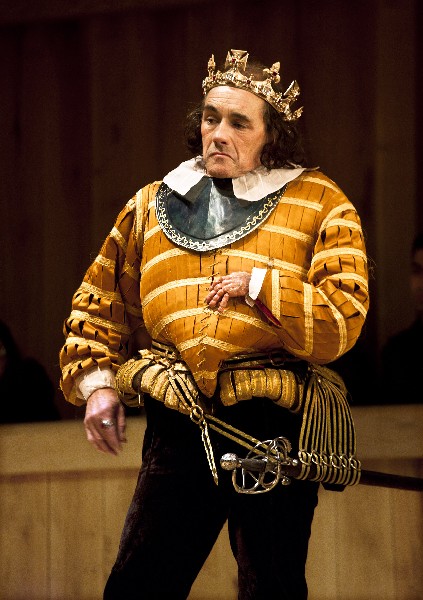 Then as Richard III. 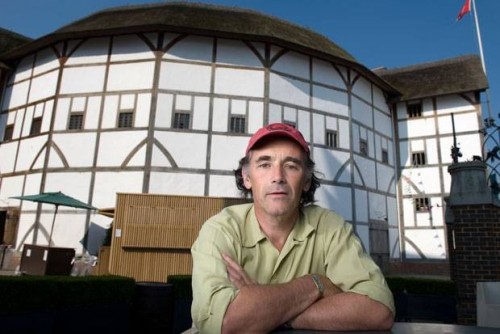 Rylance in front of the London recreation of the original Globe theatre. 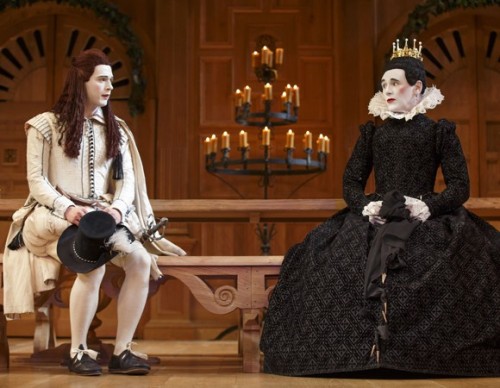 Olivia is smitten by Viola a girl playing a boy. 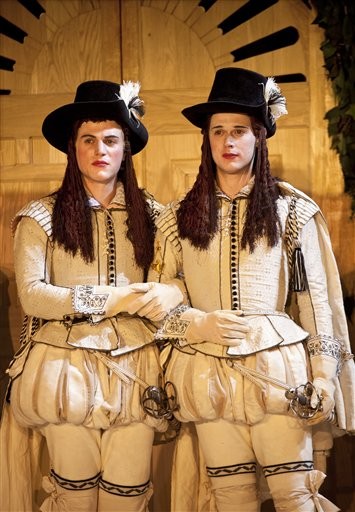 Brother and sister reunited as brothers. 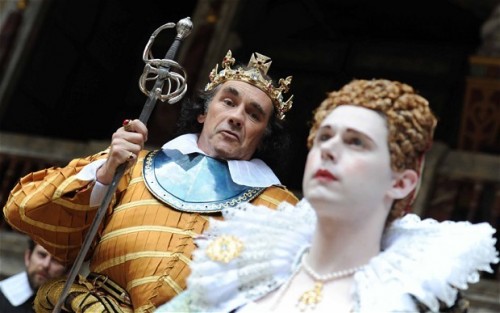 Richard seducing Lady Anne after murdering her father and husband. 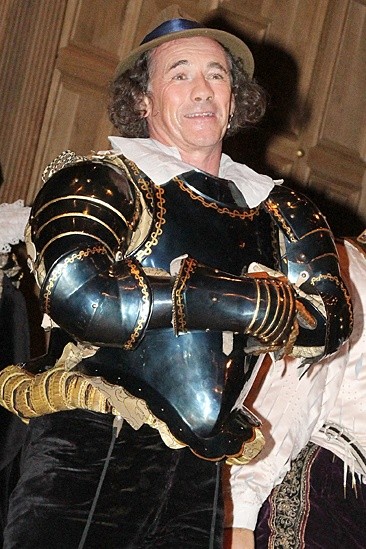 Suited up prior to defeat on Bosworth field.

Some years ago we saw Mark Rylance as Richard II at the recreation of Shakespeare’s Globe Theatre on London’s South Bank. Short on creature comforts, either on the straight backed benches or standing in the large open area in front of the stage, during the summer months with natural daylight and no roof it approximates the conditions of Elizabethan theatre.

Then and now the standing room seats were cheap. It is where the common folk of London came and went during plays that in their original form lasted for several hours. This vulgate audience was known to hoot, holler and heckle often rather rudely.

It is hard to imagine today, with Shakespeare viewed as iconic and precious, an acquired taste of the cognoscenti, that during the life of the Bard his plays were the popular art form, appealing to all strata of society from Queen to beggars.

Often the asides that exist in the work were directed as call and response to the great unwashed massed closest to the stage. It accounts for some of the bawdiness of the Bard. Bear in mind that he wrote in the language of the time which landed fluidly on the ear. Today it is more of an effort to grasp the poetic language. Particularly when delivered by a less than superb and well trained actor.

It is challenging to deliver the lines in the conversational manner that they were intended. This is particularly true of the comedies. Jokes don’t carry well through the centuries. Often it is more accessible to absorb the well known tragic and historical works. It helps to be familiar with the play before attending a performance.

All of these issues and considerations conflate as why these two great works brought to Broadway by the two time Tony Award winner, Mark Rylance, are regarded as the singular, stunning, once in a lifetime, boffo smash and triumph of this or indeed any season.

Shakespeare is no stranger to Broadway, but, well, never like this.

The mandate of Rylance and his band of merry men has been to wow New York with truly authentic productions. Well, as close as possible short of a visit to the Globe where these play originated.

Every effort has been made to turn back the clock but not as a tedious, scholarly exercise. One attends theatre for entertainment and not education. But if you can conflate the two, in this case rip snorting fun and sensational evenings of over the top, gonzo theatre, well then, all the better.

It started a half hour before the first lines were delivered. Audiences took their seats and watched as the actors were dressed on stage. It was particularly fascinating to see how guys become gals. We were just riveted seeing Rylance transformed into the simpering, mincing Olivia.

While being dressed he stretched and limbered up including violently shaking his hands and wrists to get that essential feminine flutter. Once fully gowned we were intrigued as she practiced gliding about the stage seemingly suspended like a hover craft. That phenomenal glissando provide to be key to the projection of male to female and was emulated by all the transgendered characters.

During the dressing sequence costumed musicians performed on period instruments. These segments drew applause from the audience.

While not the Globe the design by Jenny Tiramani as much as possible simulated elements of an Elizabethan theatre. There were stalls on either side. These seats on stage were sold out long ago. The actors, as in original performances, chatted and interacted with these patrons. The back of the stage comprised a two leveled structure in wood with two doors and the musicians on the balcony above. There were some eight suspended chandeliers with actual burning candles. During the performance now and then a hunk of wax dropped down with a plop. A deft actor then booted it off the stage.

Over two nights, first Twelfe Night then Richard III there were no changes in the pre performance ritual or staging. It confirmed the “bare pipe” approach of our very own Shakespeare & Company with its stripped down focus on period costumes and props.

Yes, Twelfe Night was funny. Hilarious in fact. But, here’s the kicker, so was Richard III. Huh? The hunch backed fiend played for laughs? We wondered just how authentic was that. I am not enough of a scholar to confirm or deny that approach. Rylance improbably played the history play as a dark comedy.

Of the two plays and performances critics and audiences agree that Twelfe Night was the greater triumph. It will be a travesty if Olivia does not earn Rylance his third Tony Award.

Significantly, during this run which ends in February, there are more performances of Twelfe Night than Richard III. Tickets are still available and you absolutely must see both. If you truly love great theatre be forever cursed and damned should you miss this magnificent tandem.

This double header left no doubt that Rylance is one of the truly magnificent classical actors of his generation. Previously on Broadway I loved his mad performance in La Bete which won no awards.

Much of his knockout physical comedy is off the page. Olivia has taken a vow to shun male company for seven years. Until that is, Viola the wonderful Samuel Barnett, playing a boy who’s a girl playing a boy, shows up as an emissary from Orsino (Liam Brennan). It’s love at first sight and we just roll in the aisles as the simpering Olivia invents excuses and sight gags for him/her/him to return the next day and the day after.

Viola it seems is impersonating her brother assumed drowned in a shipwreck that washed them ashore. There is a wonderful final scene when he shows up in an identical costume and wig. It’s impossible to tell them apart as the play rolls to its rollicking conclusion.

As a small, slight man Rylance gender bends into a truly compelling female. It’s a bit tough, however, to accept him as the murderous Richard who we know is a formidable warrior. Rylance plays him as a hideous imp caught up in wit and laughing at his own jokes.

Truth is we laugh along but all the while feeling somewhat duped.

No, this is not the Richard we have come to expect and hate. Here we are being invited to laugh at and with him.

By now we have been disabused of having any fixed ideas of how Shakespeare is to be played. It is not static text but up to every director and actor to put their own spin on the classic roles. For aficionados of the Bard we come to expect the unexpected.

But this Richard? Come now, really. Rylance, you’ve got to be kidding.

It’s a performance that has us cheering and stomping as well as puzzled and befuddled.

This is a Richard III that will be debated by audiences and critics until, well, the next great Richard comes along.

Which is not bloody likely to be any time soon.