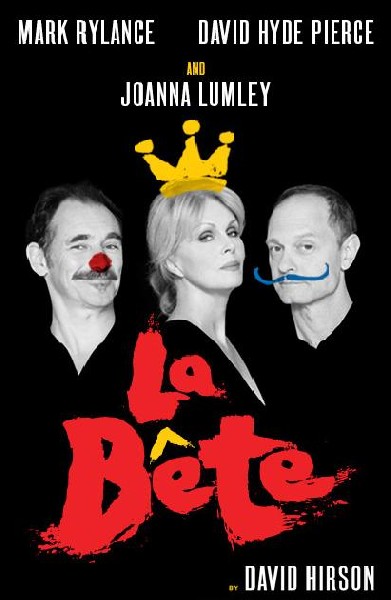 La Bete, surely the best play of the 2010 Broadway season is closing on January 9. 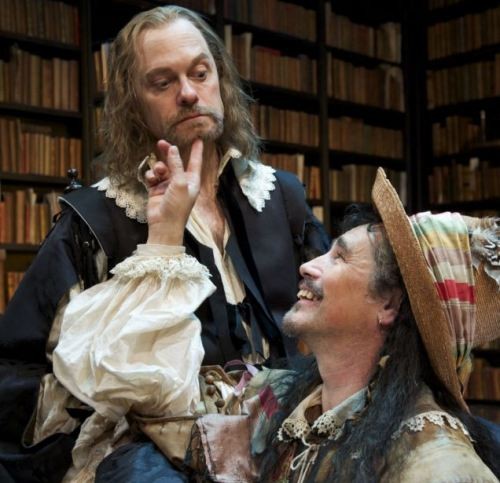 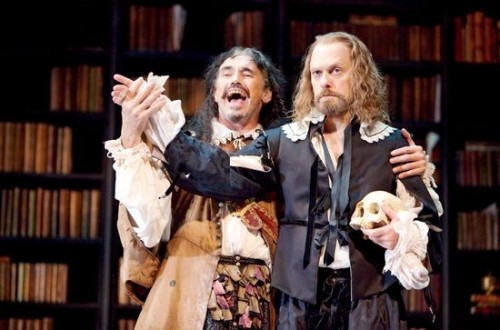 A study in contrast. 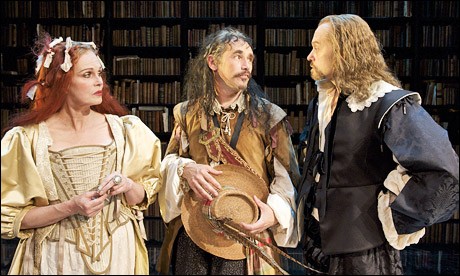 The Princess has the absurd idea of the two collaborating. 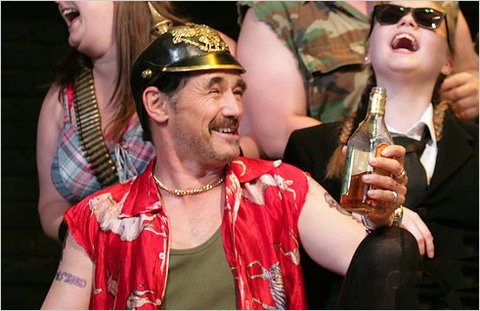 In April Rylance returns to Broadway in Jerusalem.

La Bete, written in turgid rhymed couplets by David Hirson, is Theatre of the Absurd set in the age of Moliere.

Through the whim of the patroness, The Princess, a suitably imperious and autocratic Joanna Lumley, the two “geniuses” whom she supports are ordered to collaborate.

This is indeed bad news for the very serious Elomire (David Hyde Pierce) who’s pretentious dramas epitomize the essence of high art. In a brilliant, book lined set by Mark Thompson, he discusses, with dread, an unwelcome turn of events with an associate and employee, the elderly Bejart (Stephen Ouimette).

As a prologue we have seen a glimpse of a feast, behind a scrim, of the company and its special guest Valere (Mark Rylance).

As the play begins Valere enters spitting and spewing melon while clutching a flask and glass. Belching, farting and chortling he launches into what, as presented by the brilliant Rylance, has to be one of the most remarkable and demanding, insanely, careening and inventive monologues, some thirty or more non stop minutes, in the canon of contemporary theatre.

In its daunting degree of difficulty, rendered with such panache and élan by Rylance, it calls to mind the Lucky speech in Waiting for Godot.

Only highway robbery and possibly popular favorite, James Earl Jones, will prevent Rylance from earning a Tony award, his second, for this performance of a lifetime.

The bad news is that there is only now until January 9 to rush to see this unforgettable comedy. But, be still dear heart, Rylance returns to Broadway in Jerusalem.

It will be presented at the Music Box Theater, with previews to begin on April 2 and an opening night set for April 21.  Rylance will reprise his Olivier Award-winning role as Johnny “Rooster” Byron, the drug-fueled former daredevil he portrayed in the play’s original run at the Royal Court Theater in London. Mackenzie Crook (of “The Seagull” and Britain’s “The Office”) will also return as Rooster’s friend Ginger, and other members of the Royal Court cast are expected to appear in the Broadway production as well. Ian Rickson will direct for Broadway, as he did in London.

Be sure to mark that on your calendar.

To the contemptuous disdain of Elomire the buffoon Valere spews on and on. Fueled by his own vulgarity and self absorbed genius. He is devoid of any ability for self reflection. At every pause, where another might speak or interject, he just prattles on and on with a tsunami of banality. He often laughs with manic inanity at the brilliance and insight of his gush of ersatz poetry. This is accented with comic gestures and outrageous outbursts. It is the most inventive escapade that I have ever witnessed on stage. Good grief.

During a fit of belching and farting he retires into a niche between the books to take a dump. To the horror of Elomire he rips out pages of precious manuscripts to wipe his ass. He emerges holding a chamber pot for our inspection. Oh gross.

At times he is so enchanted by spontaneously inspired lines that he insists on sitting at Elomire’s desk to write down the fleeting lines. This is achieved while tossing aside the work of his intended colleague.

Through much of the play, so entirely consumed by Rylance, it seems the wonderfully gifted David Hyde Pierce is little more than a straight man and fall guy. Most of the time his face is drawn into stoic contempt.

This restraint eventually leads to an outburst of precise and scathing criticism. Valere reacts to this with stunned concentration but does not appear to be offended. “Is that meant as a criticism” he asks with an insouciance that brings the house down. This astonishing naïf utters that one can learn from mistakes and strive to improve.

The tipping point of the comedy occurs with the arrival in the studio of the Princess. This is accomplished with hilariously inventive staging. Through a door there is a blast of glitter filling the room followed by the white gowned Princess. She has arrived to see how her charges are getting along.

Not well according to the offended and protesting Elomire. He delivers a scathing denunciation of the skills of his rival. In a great moment she shrieks that her’s is the only opinion that matters.

Of course this is the entire point of the play. High art suffering the whims of noble but idiotic patrons. It recalled that stunning moment in Amadeus, where that other Bete, Mozart, made a fool of Saliere in front of their similarly ridiculous patron. Then, as now, who pays plays.

Prior to his discovery by the Princess Valere had been a solo street performer. It is her whim that he will perform a short play using Elomire’s company which she supports.

What follows is predictably dreadful but hilarious. To any observer with taste and common sense it is a travesty. But the Princess finds it fresh and inventive. And a potential hit with audiences compared to the string of high minded flops of Elomire.

In her view of things, through collaboration, the vacuous Valere will acquire gravitas and the grim Elomire might lighten up. Indeed, a potentially winning combination.

The ill advised Elomire demands that the Princess choose between them. In desperation he turns to Bejart and then individuals of the company.

Reluctantly, they abandon him stating that the play of Valere wasn’t really that bad. Even artists have to eat while foolish pride, like Elomire’s, leads only to an empty stomach.

This culminates in a great speech by Hyde Pierce that should land him a Tony nomination for best supporting actor. It sets forth the dichotomy between high art and vulgarity.

As we all know, vulgarity wins every time. Actually, that’s not very funny as La Bete ended on a rather somber and melancholy note. We see the defeated Elomire fading into the all consuming fog of oblivion.