Bernini: Sculpting in Clay at the Met

Stunning Exhibition on View Through January 6 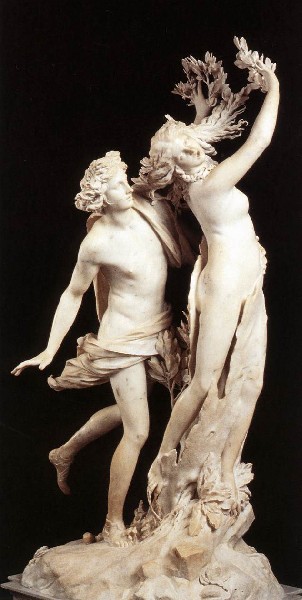 The breathtaking Apollo and Daphne from the Villa Borghese in Rome. 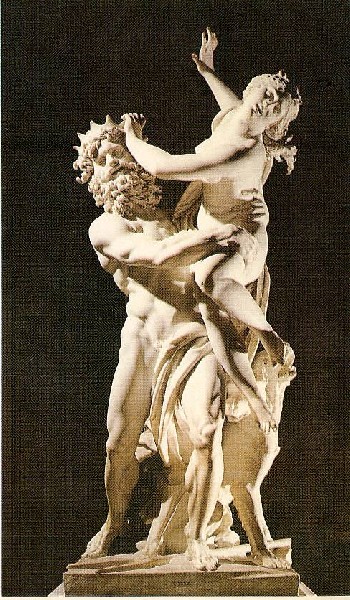 Rape of Prosperina from the Villa Borghese. 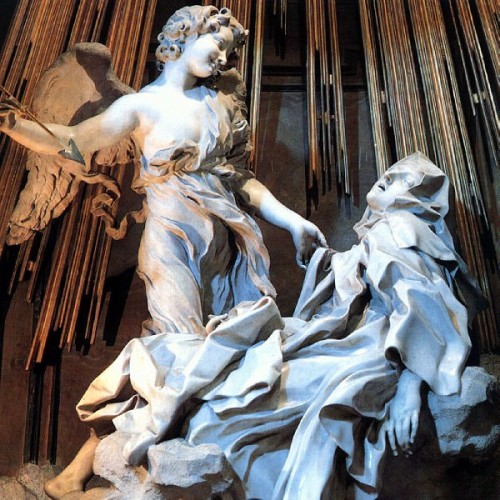 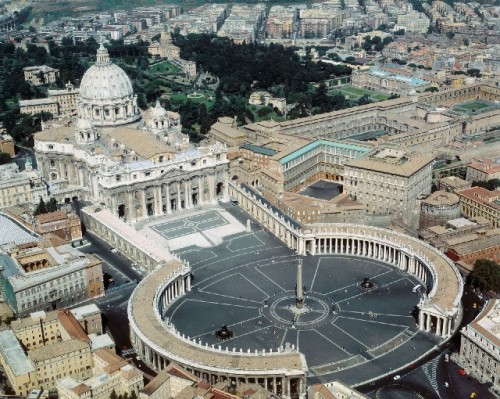 Bernini designed the colonnade and provided many sculptures to complete St. Peterâ€™s Basilica in Rome. 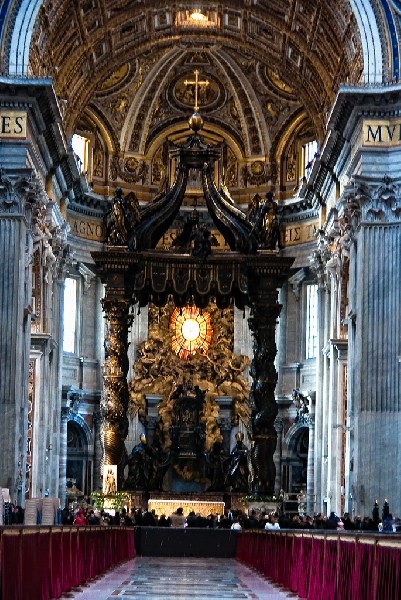 View down the main aisle of St. Peter’s and Bernini’s Baldacchino over the altar. 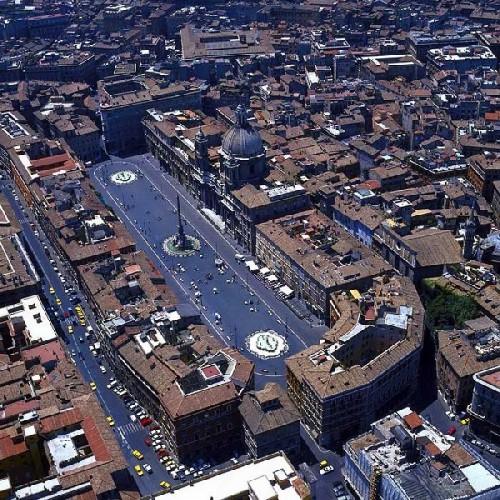 The Piazza Navona in Rome. 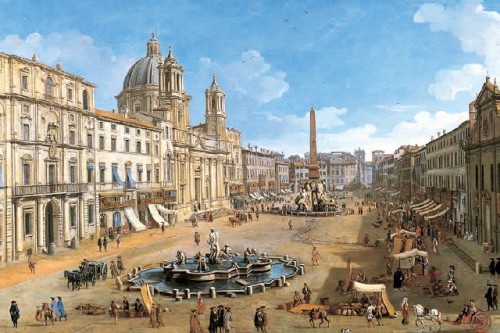 An 18th century view of Piazza Navona by Canaletto. 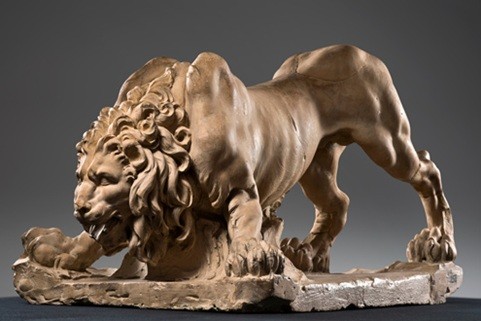 "ÂœLion on the Four Rivers Fountain"Â Courtesy of the Metropolitan Museum of Art. 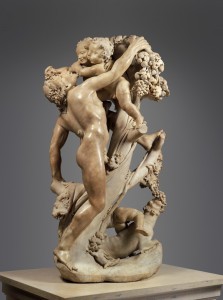 â€œBacchanal: A Faun Teased by Childrenâ€ (1616) from the Metâ€™s collection. Image courtesy of the Metropolitan Museum of Art.

Although Gian Lorenzo Bernini (1598-1680) was active during the era of the baroque he is the very definition of the term Renaissance Man.

Consider that he was the architect for a church in Rome for which he, painted the murals, carved sculptures, and composed the music for its dedication.

Many artists, sculptors and architects contributed to the greatest project in Rome, Saint Peter’s Basilica in the Vatican. It was Bernini who finished the Cathedral providing the horsehoe shaped colonnade, topped by sculptures that leads to the entrance. He also provided the four, monumental sculptures that mark the crossing, as well as the enormous decorative canopy The Baldacchino over the main altar. At the end of the apse he created the light infused Cathedra Petri (the throne of Saint Peter). As well as several enormous and comples tombs for Popes and the Vision of St. Constantine.

In addition to the Vatican Bernini as architect and sculptor more than any other creator left his mark on The Eternal City. For these many projects he had numerous assistants.

The range and variety of his projects is unparalleled in the history of art.

As a Renaissance man he is comparable to Michelangelo who was also a sculptor, architect, painter (reluctantly) and poet. His magnificent ceiling frescos for The Sistine Chapel were created under orders from the Pope. The artist felt that there were others more qualified, Raphael, for instance.

It is relevant to compare and contrast their approaches to making sculpture.

The stunning exhibition at the Metropolitan Museum of Art Bernini Sculpting in Clay includes 29 of the artist’s bozetti, or sketch models in terracotta, standing between 12 and 20 inches tall — along with one or two larger and more finished models, which are as much as three feet tall.

It reveals the working process of the artist making clay sketches, or bozetti, as well as more definitive maquettes or finished models to be measured and duplicated. The studies on view provide many insights particularly if you are familiar with the finished works in Rome.

Significantly, no such bozetti survive for the works of Michelangelo. There have been a few widely debated works in clay that have cropped up. There are many sketches for the frescos which are among the finest master drawings of the period.

But the unique genius of Michelangelo, which is described in his poetry, was to “liberate” the soul of the sculpture embedded in the stone itself. This unique process has been discussed as an aspect of the philosophy of Neo-Platonism.

One of the best ways to understand this technique is to examine a series of unfinished “slaves” in the Accademia Gallery in Florence. They line a corridor leading to the enormous early work David which established his reputation. Two finished works from the series for an abandoned tomb of Julius II are the Bound Slave and Captive Slave in the Louvre. They are among his most sublime creations.

If one compares the David of Michelangeo with Bernini’s version in the Villa Borghese Michelangelo wins hands down.

But a further visit to the Villa Borghese with Apollo and Daphne and his Pluto and Proserpina tips the balance the other way. These magnificent works just take your breath away. The stone is treated as though it were as malleable and yielding to the touch of the artist as those clay sketches on view in this exhibition.

It also underscores a stylistic trajectory toward excess as a signifier of the baroque.

One may follow the arc from the early high renaissance classicism and restraint of the young to mid career Michelangelo. Which gave way to the emotional distortions and exaggerations fueled by the controversy and crisis of faith of the Reformation which evoked mannerism.

With its excess and exaggeration of the martyrdoms of saints, gaudy, over the top church decoration and music, the Church, under seige by the Protestant Reformation, used the arts as a way of counter attacking. Literally overwhelming the faithful with every more sensational works of art. Be they the paintings of Caravaggio, or the architecture and sculpture of Bernini.

Consider, for example, the uncanny eroticism of Ecstasy of St. Teresa, 1645-52 (Cornaro Chapel, Santa Maria della Vittoria, Rome). The Fogg Art Museum has loaned its remarkable series of bozetti for that seminal work, arguably, one of the most sublime in the history or art.

Although we are confined to sketches in clay and some drawings the Met installation guides us aptly through the works. We took time to sit before a large screen projection of period renderings of Rome. It zooms in on various fountains and churches allowing us to sense the impact of the artist on the urban landscape.

Among the few finished works in the exhibition is Bacchanal: A Faun Teased by Children (1616) from the Met’s collection. He was just 18 at the time when he created the piece with his father. This example of juvenilia displays many of the signature skills that will inform his mature work.

While relatively modest this project has been remarkable for assembling almost all of his surviving terracottas, including 15 from the Harvard Art Museums, the largest collection of Bernini terracottas in the world, on loan for the first time. Other lenders include Musée du Louvre, Paris, the Vatican Museums, the Museo del  Palazzo di Venezia, Rome, the Galleria degli Uffizi, Florence, the Victoria and Albert Museum, London, and the Royal Collection at Windsor Castle.

Many of these loans have never been seen in the United States. Highlights include a dynamic terracotta model for the lion (ca. 1649-50) destined for the base of the Four Rivers Fountain in the center of the Piazza Navona in Rome; the series of models for the Angel with Superscription (1668-69); the Moor (1653), Bernini’s largest surviving model; and drawings and clay sketches for the Kneeling Angels (1672) on the Altar of the Blessed Sacrament in Saint Peter’s Basilica.

During this Holiday season, hands down, this is the most exquisite special exhibition currently on view in New York