The Lifespan of a Fact at Studio 54 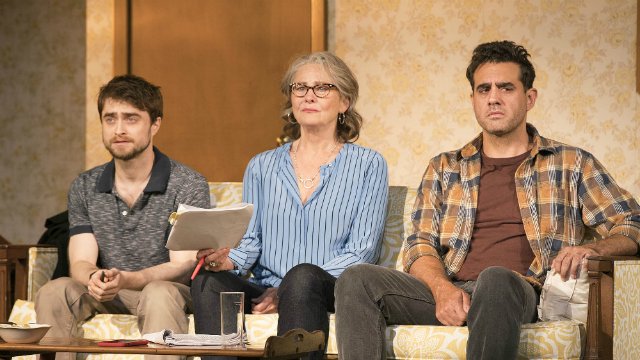 Are facts the same as the truth?

For anyone interested in journalism and writing, The Lifespan of a Fact is a fascinating play that raises current issues.

We’ve seen it all in the last decade. Increasing conspiracy theorists on the internet who may use any discrepancy as evidence of conspiracy involving the news. Here in Connecticut with the Sandy Hook shooting five years ago, we are aware of those who deny it happened claiming that it was “all staged” and using as part of their evidence, details that kept changing as the news story emerged.

Journalists have been fired for not being 100 percent accurate. Standards seem to be getting higher and higher.

But what about an essayist? Or a columnist? Do they have more leeway to change details for storytelling?

In the latter half of the last century that debate raged with what Tom Wolfe called “new journalism,” scholars called “literary journalism,” and Truman Capote referred to his book In Cold Blood, as a “nonfiction novel.”

At the core of The Lifespan of a Factar are  all of these issues. John, played wonderfully by Bobby Cannavale, is an essayist living in Las Vegas. His latest long essay is set to run in a quality publication (think New Yorker) and his editor, Emily, is anxious to have it run. She thinks it is dynamite and will help raise the visibility of the publication. But, she has been burned by errors of fact, so she needs a fact-checker. Apparently the publication, in an economy move, had eliminated the fact-checking department and now almost anyone can do it.

This “almost anyone” that she turns to is a Harvard graduate, Jim, interning at the publication and with expertise in searching the web. She gives him the job and a five day deadline.

Jim takes to the job with a vengeance, trying to prove every statement in this long essay about a 16-year-old Las Vegas teen who jumped from a building. Every time Emily checks with him, he is raising another issue and after several days, he is still on the first page. He takes it upon himself to fly to Las Vegas to do field work and even knocks on the door of the parents of the dead boy.

This might sound less than exciting but Daniel Radcliffe as Jim creates a well-rounded portrait. He’s by turns earnest, dedicated, self-important, and righteous.

It is funny when he explains to Emily the problem with confirming the number of strip clubs in Vegas. It appears that the association which was John’s source has used different numbers in various articles. Then he gets into “what is a strip club?”

Emily sees her dynamite piece going down the drain, so she too heads to Vegas and John’s house. John, of course, is annoyed at Jim’s constant questions and nit-picking.

For John what is important is the central truth of the story, which he feels can help people change the way they live their lives.

Playwrights Jeremy Kareken & David Murrell and Gordon Farrell have balanced the piece carefully. Jim isn’t just a know-it-all youth; as he points out those internet conspiracy theorists grab onto any inconsistencies or mistakes to support their theories. John isn’t blameless. To keep the opening of the story, he mentions the death of another teen that same day, but failed to mention the girl also jumped. And Emily is torn between wanting success and fearing  consequences.

This is based on the essay and book by John D’Agata and Jim Fingal. They are the John and Jim of the story. But I suspect details have been changed, in fact it is billed as “a new play based on a true-ish story.”

It is a tight 85 minutes  enhanced by fine performances. Cherry Jones gives another nuanced performance as the harried editor who may feel both the publication and her career are in jeopardy.  Daniel Ratcliffe once again he isn’t just a child actor who won fame as Harry Potter. He is a fine actor and his American accent is spot on. Bobby Cannavale imbues John with depth He may be a great writer, but is living hand-to-mouth.

Director Leigh Silverman has done a fine job. She has helped the actors develop characters fully and illuminate the issues. The scenic design by Mimi Lien gives us the high polished offices of the magazine and John’s less than affluent Las Vegas home as well as other settings.

The Lifespan of a Fact is a limited run through January 13. Make an effort to see this at Studio 54, 252 W. 54th Street. Tickets are available through Telecharge.

Courtesy of Two On the Aisle.