Car Crash as Art and Metaphor 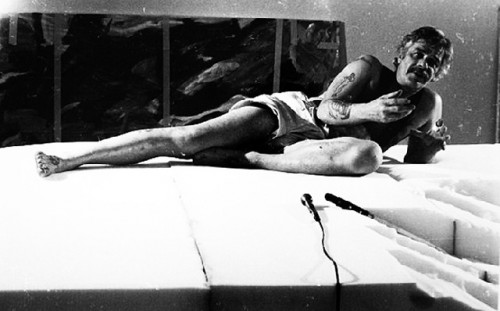 A circa 1970 photo of John Chamberlain by Anton Perich. 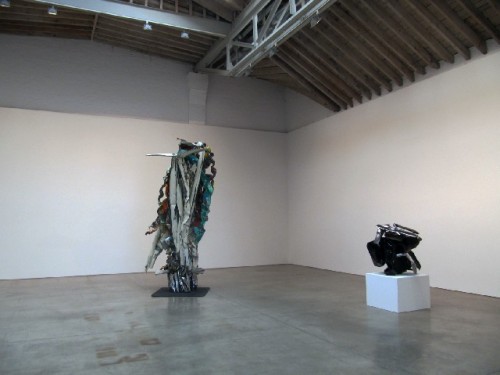 An installation at Paula Cooper Gallery in New York. 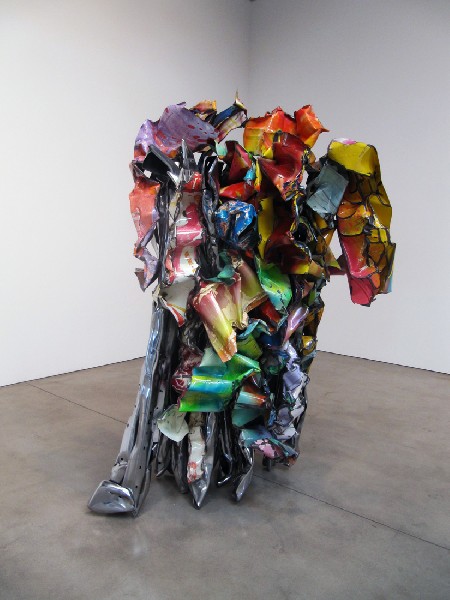 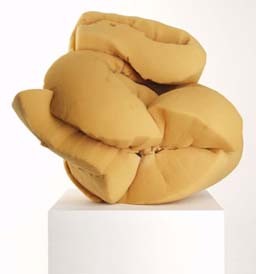 A foam sculpture from the late 1960s. 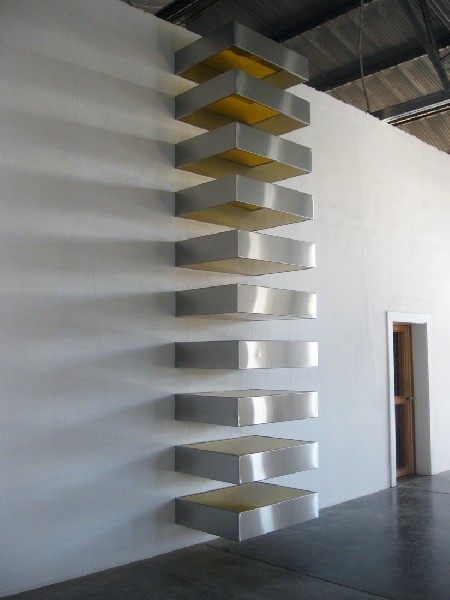 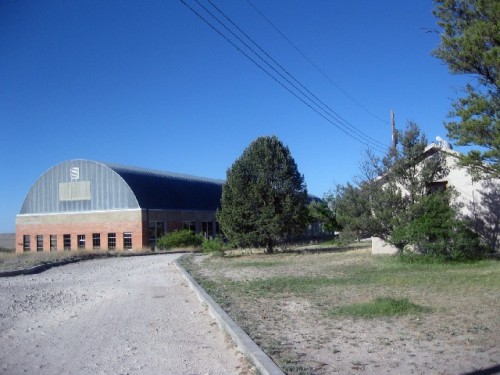 Starting out on a tour of the Chinati Foundation in Marfa, Texas. 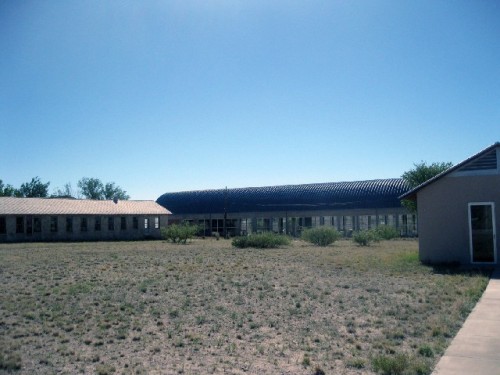 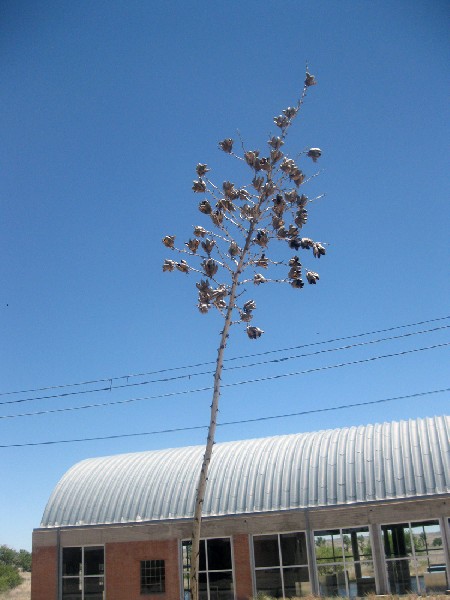 Art in the Southwestern landscape. 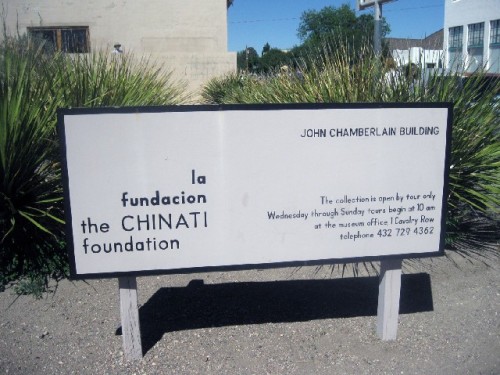 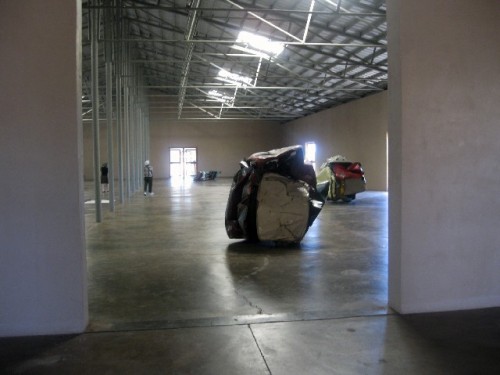 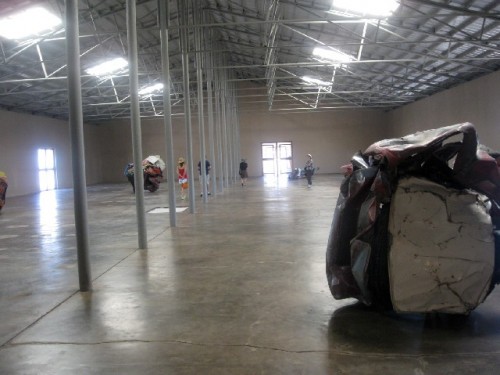 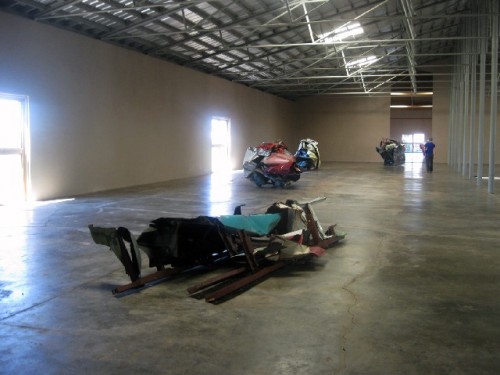 The work has room to breathe. 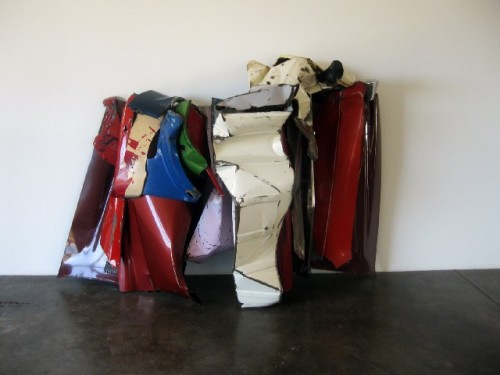 Up against a wall. 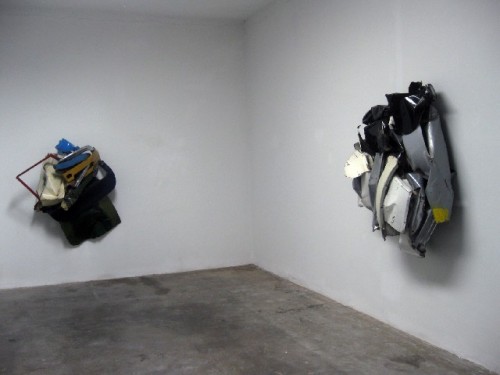 Or hanging from it. 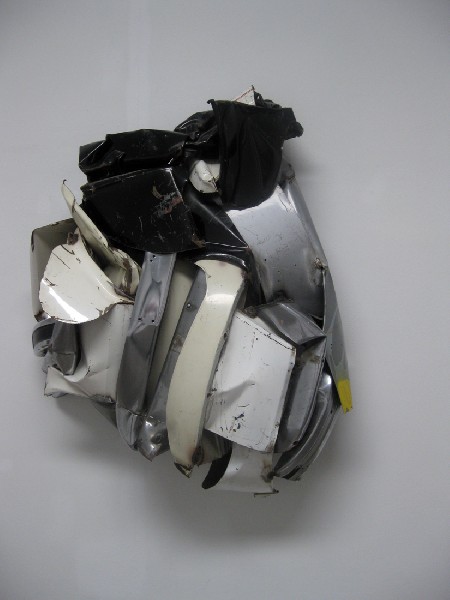 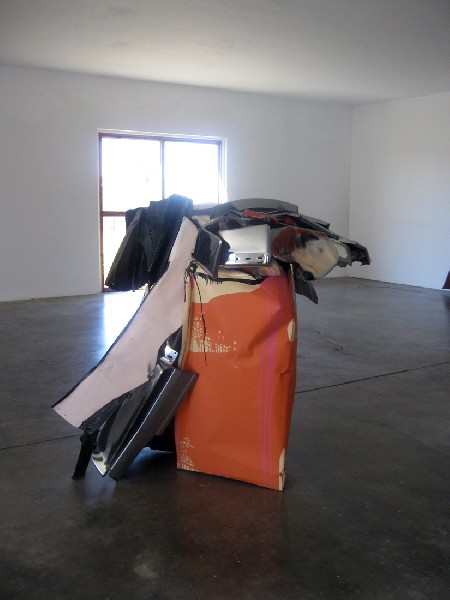 A tall, hard living, rough guy  John Angus Chamberlain (April 16, 1927 – December 21, 2011) was, arguably, a one trick pony and enduring presence. He pursued a roller coaster career in the quixotic art world. In hindsight, with more ups than downs.

On the cusp between the macho, swing from the shoulder, gestured thrust of the Post War era of Abstract Expressionism he found an edge into the irony of Pop and the cool of Minimal Art.

If the welded steel of David Smith defined the generation of American sculpture that preceded him Chamberlain derived an interesting variation. Many other artists created welded steel sculptures from found metal scavenged from junk yards. Chamberlain fixated on crushed parts from car crashes.

The enameled colors of the car parts gave a polychromed aspect to seemingly arbitrary forms. The serendipity conflated with the liberated spirit of the Post War artists who drank, debated, argued and brawled at the famous Cedar Bar in lower Manhattan a short walk from Washington Square Park.

If “Pollock broke the ice,” as de Kooning famously remarked by abandoning the brush for a technique of dripping paint, similarly Chamberlain made a dramatic breakthrough with his aggressive, brutal, powerful sculptures.

It was heady company. But when I knew John in the late 1960s, through my friend Jim Jacobs who worked for Castelli, the welded car crash sculptures had become a cliché. They had not yet achieved the iconic status of later years when he enjoyed sustained celebrity and security.

Hanging out with John was mostly a matter of being there. He had a super scaled ego and persona, an aura to bask in, but he was hardly an oracle. There were few if any pearls of wisdom derived from intimate moments. During an afternoon in the studio when he discussed an experimental series of works, more like paintings, using sprayed metallic paint, the dialogue, in hindsight, seemed banal.

But he had the bona fides of a tough guy, son of five generations of saloon keepers, who managed to slug out a career in the upscale art world. He was born in Rochester, Indiana and grew up mostly in Chicago. After serving in the Navy, from 1943-1946, he passed through the Art Institute of Chicago (1951-1952) and more importantly, the seminal Black Mountain College (1955-56) which briefly was the spawning matrix for an American avant-garde.

Through his life and career he had the gift and charisma of being in the right place at the right time. When I knew him that meant nights at Max’s Kansas City near Union Square. The highlight of an evening at Mickey Ruskin’s bar occurred when Andy and the gang from the Factory took over the back room under a Dan Flavin light piece. As a poet friend put it “John drank in the front room with the boys.”

The Warhol gang was fast and loose. But Andy never rejected anyone. Straight guys like John hung out with Andy to score the frails. John dated Ultra Violet one of Andy’s glamorous and well heeled Super Stars. Chamberlain married several times.

Through Jacobs he found his way to the Berkshires and the church of Ray and Alice Brock in Stockbridge. It was around the time when Arthur Penn was shooting the film “Alice’s Restaurant.” There was some major partying and tripping going down and John was on the scene. In the summer heat it was amusing to see the swallows tattooed to his pectorals and the tops of his feet. Most likely they were artifacts of his Navy days.

With the car crash sculptures then out of the fashion John was experimenting. With Jim and David I spent an afternoon while John carved up thick slabs of foam rubber. It is the kind of material then used for mattresses. With enormous, Sumo like power, he attacked and wrestled with the material. With help from assistants he tied rope around the forms.

They were wonderful. So fresh, whimsical, and curvaceous. It seemed like Chamberlain had reinvented himself. Taken his core idea and pushed it into an exciting new direction. The bad news was that Leo couldn’t sell them. Collectors balked at the ephemeral, non archival nature of the material.

Since then I have rarely seen the foam pieces. I don’t know what has become of them. Most likely like old mattresses they have disintegrated. They must be nightmares for collectors and conservators.

One of John’s drinking buddies was Donald Judd. He was notoriously demanding regarding the perfect craft of his fabricated pieces. It seems that a series of galvanized metal boxes, which he attached to walls, vertically, in series did not meet his standards.

In David’s VW bus John, Jim, David and I went to Judd’s studio. We loaded the rejected boxes and drove down to Canal Street. John had made an arrangement to use the equipment of a factory that bailed scrap materials to sell as recycling.

One by one John put the Judd’s into the machine and using a switch controlled the compression to crush them. He moved them about now and then to find interesting shapes. When the load of Judd’s had been suitably crumpled and crushed we drove them back to the studio where they were then welded together to become Chamberlains.

They had the forms of the car crash pieces but with a matte grey color. Again, I thought they were simply wonderful and have always delighted in seeing them.

For most of his mid to late career Chamberlain strove to be more than a car crusher. More than just their shapes, forms and color but there was no escaping the inherent metaphors. A recycled car crash was just too potent an allegory for our wasteful, destructive, materialistic society. When asked about the work he declined to discuss it theoretically. It was more about doing than thinking.

While expending so much energy trying to distance himself from the car crashes, eventually, they just ran over him. While the art world is annoyingly fickle it also loves to recycle and rediscover. While movements and artists come and go, with enough time and critical distance, a few get written into the textbooks as icons of an era.

Today, most major museums pride themselves on having a Chamberlain. Preferably a vintage work before he just cranked them out.

Large, three dimensional objects sculptures need space. That is a precious commodity in museums. But works by Chamberlain may be seen in depth at Dia Beacon and outrageously at the Chinati Foundation in Marfa, Texas.

Donald Judd, through the Dia Foundation, bought an abandoned Air Force base in Texas. He made his home there with a studio/ residence in the center of town and several ranches in the nearby mountains. There were later complications and a disconnect from Dia. Particularly after Judd died the management of the vast spaces, warehouses for the work of Judd and his friends including Ingoflur Arnarsson, Chamberlain, Roni Horn, Richard Long, Ilya Kabakov, Claes Oldenburg and Coosje van Bruggen, David Rabinowitch and John Wesley has become difficult to follow.

Marfa has become a destination for art world pilgrims. One tours the vast complex of buildings by appointment. A guide lets you in and after sufficient time the building is locked as you move to the next ones. The tour generally lasts a day with a break for lunch. Unlike most museums you don’t get to roam around. One afternoon a week his home/ studio is open for a guided tour. On the day Astrid and I visited there was just one other person, an artist from New York. I was particularly impressed by his extensive library of art history books, collection of Navajo rugs, Native American pottery and artifacts. It was fascinating to see his works as he opted to live with them.

One was impressed by his remarkable generosity in showing in such a spectacular manner not just his own work but that of others whom he admired.

Jim Jacobs, now a private art dealer, informs me that he has made many visits to Marfa. With a partner he is a major dealer in the material. It is indeed an experience that one would enjoy having on multiple occasions. Even though Marfa is a stretch to get to.

Chamberlain has been written into the standard texts of his era. His works have been exhibited around the world and included in the São Paulo Art Biennial (1961, 1994), the Venice Biennale (1964), the Whitney Biennial (1973, 1987) and Documenta (1982). He had over 100 solo shows, traveling exhibitions, and retrospectives.

His work and burly, gruff, abusive persona will linger. The market value of the work will likely increase. But it will take a few generations to determine whether his creative output was more than that of a one trick pony. The car crash metaphor, however, has remarkable staying power.