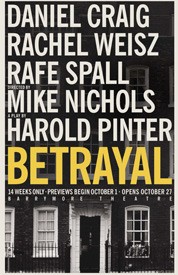 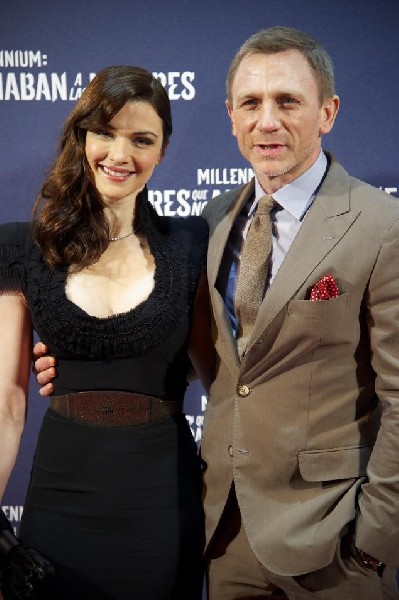 The stunning couple Daniel Craig and Rachel Weisz ahve been a hot ticket on Broadway this season. 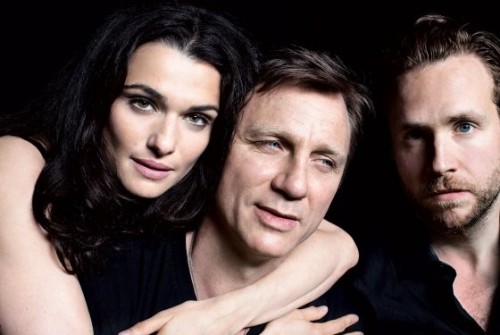 With Rafe Spall to complete the love triangle. 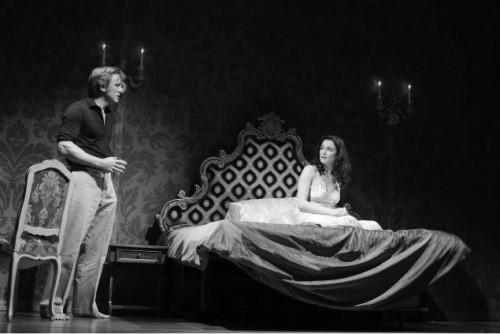 Confrontation in the bedroom. 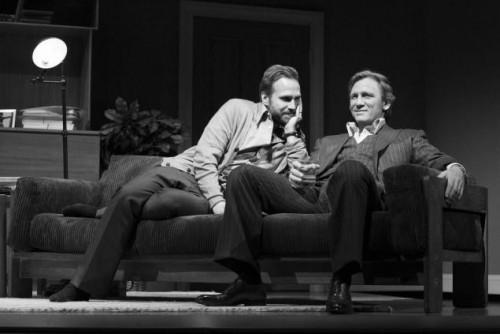 Is it about more than friendship.

The revival of Harold Pinter’s Betrayal, through January 5, has been one of the mostly sold out, hot tickets of the New York season so far.

It went large before opening night and mixed reviews which tossed cold water on a steamy megage a trois of hunky leading man and current James Bond, Daniel Craig (Robert), paired with his real life wife the stunning, Oscar winning (The Constant Gardener) Rachel Weisz (Emma). She is having an affair with Jerry (Rafe Spall) making his Broadway debut.

The men are best friends and competitors in the publishing business. They each edited poetry magazines respectively at Oxford and Cambridge. Overall, the characters reek of breeding, manners, education, style, sophistication and savoir-faire. There is patter about who’s who in publishing, cricket, and getting together to play squash. It’s a no brainer that Robert will win because as he tells his friend “I’m more fit.” Indeed Mr. 007.

Perhaps the greatest of numerous disappointments is that Craig never takes off his shirt to reveal that chiseled form. Although in one steamy scene, before a too quick blackout, he drops trou to shag the Mrs. as a curious response to the revelation that she had been doing the nasty, for several years it seems, with his former Best Man.

Or perhaps not quite enough.

The trope of this play, which unlike past productions is performed as an ersatz comedy, is that it starts in a pub in 1977. It then lurches backward through a total of nine scenes to 1968 when Jerry and Emma first become adulterous lovers.

As a critic friend commented the play would be quite ordinary had it been played in the normal time line.

The most brilliant aspect of this production are the sets by Ian MacNeil. We are fascinated as they are raised and lowered seamlessly.

Mostly what Pinter’s play conveys is how the upper middle class (they work after all and don’t just live on trust funds) are different from, no, make that better than us. They discuss Yeats and cheat on Betray their  spouses and best friends. Then, when all is exposed, have another martini and move on.

It's so vulgar and déclassée to twist your knickers over such mundane matters.

Arguably, I didn’t get my money’s worth ($165 for a not so great, last minute, orchestra seat) although the actors were pleasant eye candy. Rachel Weisz (a gallerist) is exquisite, sexy and ultra refined.

A few days later I again saw her in the Bourne Identity on TV. Even from a distance she was far more attractive on stage. In the first scene in the pub with Robert she is stunning in a bias cut black leather skirt.

They haven’t seen each other in some time since the affair ended. They exchange pleasantries about spouses and children. There is an awkward stutter step in the dialogue as they grope about with each other. Are there any potential sparks to ignite the now cold embers?

In the 90 minute, one act play we thread our way back through stages. These include trysts in an apartment love nest. At one point she decorates the shabby digs with a lace table cloth that she has brought back from a holiday in Venice with Robert. In perhaps the one crude line in an otherwise urbane script she describes the apartment as the place where they meet and fuck.

So, perhaps, they are less lovers than fuck buddies. When we finally get to the beginning of the affair in the 9th and final scene the intoxicated Jerry has followed her to the bedroom during a party at her home. It’s 1968 and she has snuck off to smoke a joint. Jerry blurts out that he can’t help himself, although he is Robert’s best friend, he just adores her. They are interrupted by her husband who turns a blind eye on what’s going down. Or does he? When he leaves first she puts Jerry off before they kiss.

It is argued that Robert may be more upset with Jerry than with Emma. When the affair is out in the open (apparently Robert knew all along) he says to her "To be honest, I've always liked him rather more than I've liked you. Maybe I should have had an affair with him myself."

At one point Robert suggests that he and Jerry might meet for squash followed by lunch. Just like old times. Emma attempts to invite herself to tag along. Rather archly Robert rejects that idea stating that it is for men only. A ritual that entails showering together and other intimacies. Followed by uninhibited guy talk and drinks. There are reasons why the most exclusive London clubs are for men only. It is a domain in which to read newpapers, smoke cigars and drink brandy.

The manly Craig is annoyingly passive in this play. He and Weisz are generally overwhelmed, drowned, by the tidal wave of the charged performance of Spall.

All that passion and repression is oh so British. It is revealing that drinks are poured during eight of nine scenes. In the ninth Jerry is already sloshed. While presented as young, beautiful and irresistible, perhaps, if Pinter added a few more scenes, eventually they will be middle aged, over the hill, drunks in therapy.

In scene seven, 1973, summer in a restaurant, the waiter (Stephen DeRosa) appears. We don’t really need him. It looks awkward when he clasps hands with the three stars during the curtain call.

Tepidly I recommend this play as somewhat amusing.

Does that ennui come from the mediocre direction of Mike Nichols, the so so performances, or just that this is not among the best of Pinter’s plays? When the show premiered in 1978 it was generally reviewed by London’s critics as a “minor tale of infidelity.” There have been revivals ever since of which it seems this is not among the better ones.