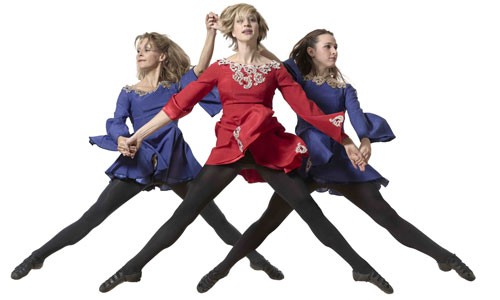 Darrah Carr Dance, an ensemble that blends Irish step dance with modern dance vocabulary, will step, jump, and fly at MASS MoCA on Saturday, January 21, 2012, at 8PM in Club B-10 as part of the popular Alt Cabaret series.  Since 1998, Darrah Carr Dance has incorporated Irish music and step dance footwork with contemporary choreography and spatial patterns to present a bold new twist on conventional Irish dance.  As The New York Times described it, "Carr's immensely likable and skillful dancers move with a space-gobbling buoyancy and openness that looks as if they might take flight."

Artistic director Carr describes her style of dance as ModERIN (a playful combination of the words modern and Erin, an Irish American reference to  Ireland) to highlight her company's mix of traditional step dancing and modern dance. Irish Dance Magazine explains,  "ModERIN is a combination of the best of both traditions, essentially creating a new language of movement from two distinct vocabularies of dance... One gets a sense of the deep and multi-layered history of Ireland, fused with the many influences the modern world has had upon it."

The Dance Insider has described her work as "filled with open, daring jumps as well as more touching, tender moments and always presenting a dash of the Irish charm of step dancing, Carr's works both brim over with ebullience and pay sincere tribute to her heritage."

Darrah Carr Dance will present two separate repertories-ModERIN and Irish Extravaganza.  Both will feature Irish duets and fusion works, with the Irish Extravaganza also concentrating on traditional group dances.  The program will also feature live music on the accordion and spoons. Originating as an all-female group, Darrah Carr Dance strives to embody Irish culture with each danced step.  Now including men in the line-up, all of the company's members are among the most esteemed Irish step dancers in the world.

Inspired to embrace her family's heritage, Carr began her Irish dance career with her sisters at the Tim O'Hare School of Irish Dance during her youth.  She went on to receive her MFA from NYU's Tisch School of the Arts and assist with the Tony Award-winning James Joyce's The Dead as Sean Curran's assistant choreographer.  Curran has since set several works on Darrah Carr Dance.  Carr was on the list of  "Top 100 Irish Americans of the Year" by Irish America Magazine and was recognized as one of the "Top 40 Under 40" by The Irish Echo.  Carr's work has not only been the focus of an NYU Master's Documentary called Reel Steps, but she. is also a featured performer in "Absolutely Irish" a PBS documentary directed by Academy Award winner Paul Wagner.  Darrah Carr Dance has recently performed its ModERIN dances on NBC's "The Today Show," at Carnegie Hall, Celebrate Brooklyn, Jacob's Pillow, and The Bank of Ireland Arts Center in Dublin.

Dancers of any skill level are invited to join the champion Irish step dancers of Darrah Carr Dance for a free dance workshop in the afternoon before the performance.  They will teach signature pieces from Darrah Carr's original ModERIN dance style and discuss their twist on conventional Irish dance choreography. Call the MASS MoCA Box Office at 413 664 4481 for more information and to reserve a spot in the workshop.

This show was curated in part by Emily Evans as a part of the Tin Man Performing Arts Administration Internship at MASS MoCA.  Evans collaborated with MASS MoCA's managing director and curator of performing arts to select and develop the event.  As the Tin Man intern, Evans helps plan and implement all live events at MASS MoCA, working to support both the artists and audience.

Darrah Carr Dance will perform on Saturday, January 21, at 8 PM in MASS MoCA's Club B-10.  Drinks from the MASS MoCA bar, as well as dinner and snacks from Lickety Split, are available before and during the show.  Tickets for the event are $12 in advance, $16 day of show, and $10