Inside Llewyn Davis by the Coen Brothers 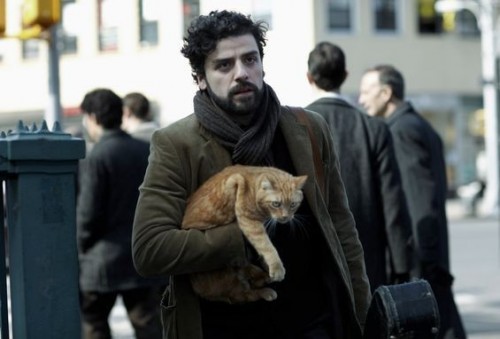 Llewyn Davis and that cat. 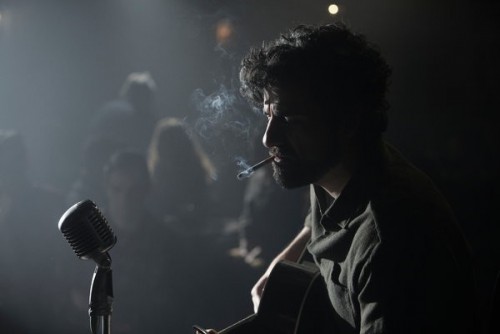 Performing at the Gaslight. 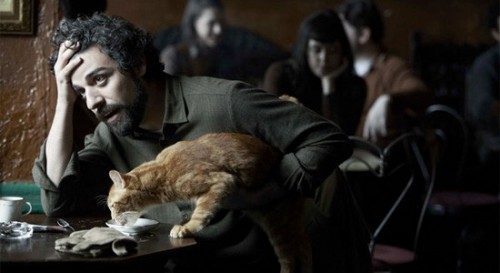 Down and out with feline companionship. 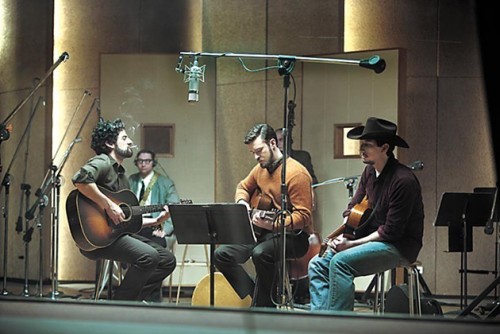 Recording the hilarious"Please Mr. Kennedy" sure to garner song of the year nominations. 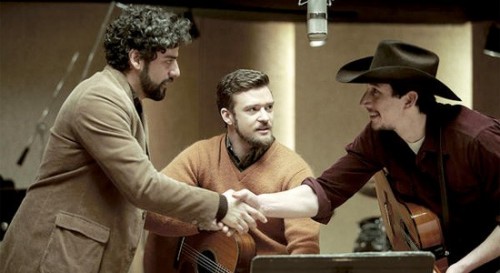 A job well done and highlight of an otherwise somber film.

According to a gushing blogger “It's nearly impossible to argue against the Coen Brothers, Joel and Ethan, as the best filmmakers working in America today, and the case can be and has been made that they are the greatest today period.”

“Inside Llewyn Davis is the warmest picture they've ever made, and though it will never attract the cultlike adoration of The Big Lebowski and Fargo, or earn the serious-lit-adaptation accolades of No Country for Old Men, it's possibly their best.” The Village Voice.

The New Yorker states that “ ‘Inside Llewyn Davis’ and ‘Nebraska’ are the current standards of what a serious Hollywood movie looks like.”

Film critics are quick to apply the term auteur to the brothers which first surfaced to describe the work of European directors of the Post War era and the emergence of the New Wave of “cinema” (not movies or film) in France.

It implies lofty aesthetics and ambition to craft works of high art and not just Hollywood’s popular entertainment.

If the case in point is Inside Llewyn Davis that means moody photography of mostly dark and grungy apartments and Greenwich Village folk clubs circa 1961 before the explosive, game changing arrival of Bob Dylan. The use of black and white is a less than subtle reference to film noir and its artistic pretensions.

What makes this film a bona fide work of art is the nasty, curmudgeonly demeanor of an aspiring singer, Llewyn Davis (Oscar Isaacs) whose ambition far outdistances any semblance of talent. As the tough as nails record producer, played by F. Murray Abraham suggests in a spot on cameo after a one song audition, he doesn’t have the chops to make it as a solo artist. Perhaps he might consider a partner or playing backup in a trio.

Thanks but no thanks. Been there, done that. It seems he had a partner who ended it all by jumping off the George Washington Bridge. With dark humor that’s just one of many fuckups.

In an improbable plot twist he has hitched a ride from New York to Chicago, paying his share of gas money, with a fat, crippled jazz musician in a masterful cameo by John Goodman. Told of the dive off the bridge Goodman had a zinger hipster putdown “You throw yourself off the Brooklyn Bridge, traditionally . . . what was he, a dumbbell?”

We stumbled into this film as an alternative of another night on Broadway during a recent week in New York. I had heard a bit about the film and, based on the Coen Brothers, thought it a better option than what else was available at the 14th street megaplex.

Overall, it is a nice little film, with lots of flaws, a herky jerky plot line, not terribly endearing characters, and a lot of truly sincere but not very compelling folk music from an era that I have mostly forgotten.

In general, 1961 was one of those “tween times” in American history and popular culture. Kennedy was still alive and the swinging, tumultuous ‘60s hadn’t yet happened. Truth is the 1960s really started in 1963. JFK was assassinated on November 22. On February 9, 1964 The Beatles pulled America out of its funk with their debut on the Ed Sullivan show. The Village folk scene got a boost in March, 1962 when Bob Dylan was released on Columbia Records. Then, in 1965 Dylan was booed when he went electric for the purist Newport Folk Festival. It was never the same after that.

The morning after seeing the film, a Friday, there was a two page ad spread in the New York Times rimmed by pullouts from rave reviews. There were double truck ads on the following Friday. A lot of money is being poured into this “art” film during prime time awards season.

Was there something we missed in what we responded to as, at best, a better than usual, small budget, ersatz Indy film? If you have a big hole in your heart for the legacy of Woody Guthrie, Leadbelly, New Lost City Ramblers, Josh White, The Weavers, Peter Paul and Mary, The Kingston Trio, Odetta, Richie Havens, Tom Paxton, Joan Baez, and The Clancy Brothers, well, you will probably love this quasi authentic visit to the Village.

During the opening scene Davis performs in its entirety "I've Been All Around This World" with its chorus of “Hang me, oh hang me, I'll be dead and gone."

There is a lot of music in this film/ tribute including “"Five Hundred Miles," "The Last Thing On My Mind"  "Green, Green Rocky Road" "The Shoals of Herring" and "The Death of Queen Jane."

Chatting with the Gaslight’s manager after his song Davis is informed that a guy wants to meet him in the alley. It results in a beating and we haven’t a clue why until the scene and its circumstances are later revisited. By then we agree that Davis, a jerk and loser, got what he deserved.

Mostly musicians at the clubs, other than headliners, got their share of passing the hat. That meant that Davis was chronically broke looking to crash on couches. Since that’s for a night or two he thumbs through a well worn address and phone book. He has a surly pattern of burning bridges.

Jean (Carey Mulligan) an aspiring singer and twist of his best friend Jim (Justin Timberlake) is pissed off and won’t let him in. She has good reasons. It seems he has been shagging her behind Jim’s back and now she’s preggers. He doesn’t have the scratch to pay for an abortion. Reluctantly she gives him the floor while a folkie solider (Tom Paxton?) passing through gets the couch.

We watch the straight soldier perform as well as an ersatz Irish trio. Asked what he thinks of them by the club manager Davis mutters “nice (Aran) sweaters.”

There is a bit about a cat. It got into the hall after Davis locked himself out after a sleep over. He has to carry it around town until he can return it. The cat again gets away and that ends up as a running gag.

At least it seems Llewyn is nice to animals.

Running out of couches his last resort is an uptown academic/ liberal couple. They welcome him warmly and insist that he join them and guests for dinner. He is asked to sing for his supper. That turns ugly when she sings along on what was a chorus with his dead partner.

There is an explosion in which he states that he’s not some amateur, like them, and that “I do this for a living.”

Hitting rock bottom Jim hires him as back up for a studio session. It’s a trio gig for a novelty song “Please Mr. Kennedy.” Hilariously it’s so bad it’s good, one of the highlights of the film, and a candidate for “best song” during awards season.

Given the options of royalties, long term, or $300 for the session, Llewyn takes the cash. The song turns out to be a hit.

The plot point is that he now has the money to pay for an abortion. The doctor surprises him by stating that he doesn’t owe anything this time. His ex, who he stopped seeing, opted to have the baby. She and his child are out there somewhere.

There is something about trying to find her while passing through Ohio. That results in a non sequitur car wreck. Then a kind of dead end visit to his sister. There is plot spin about his father a former merchant marine. He visits his estranged dad for an uncommunicative, sad encounter in the hospital.

The drift is that he doesn’t want to end up like that. This leads to an admission of failure and aborted plans to ship out to sea.

Huh? The On the Road sequences just don’t fit or make sense. Kerouac the Coens are not. Trust me.

Back at the club the crude and vulgar manager constantly makes smarmy remarks about Jean. Finally he blurts out that he had sex with her. “How else do you think you get to play at the Gaslight” he asks. That leads to an explosion resulting in that beating in the alley.

This is a modest moody movie that has its moments.

But, please, pull back on the hyperbole for the Coen brothers. They make nice films.

Let’s leave it at that. Surely there will be awards nominations but it’s a crowded field this year with a lot of better films.