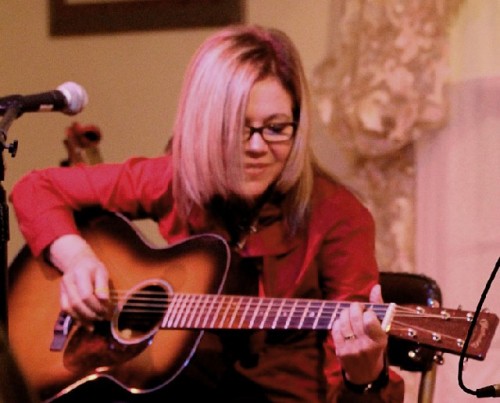 Marylou Ferrante opening for Paul Geremia. - All photos by Mark Peters and published here with his kind permission. 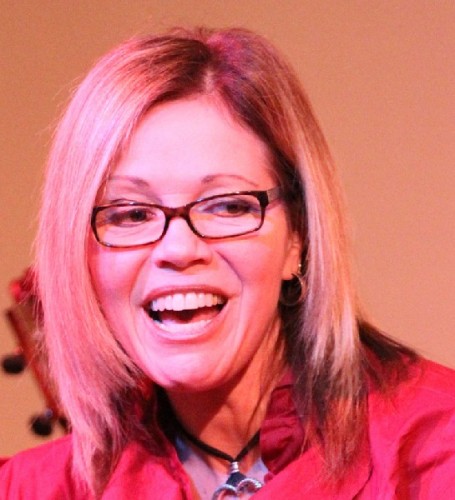 She sings with a clear well tempered and engaging voice. - photo by Mark Peters 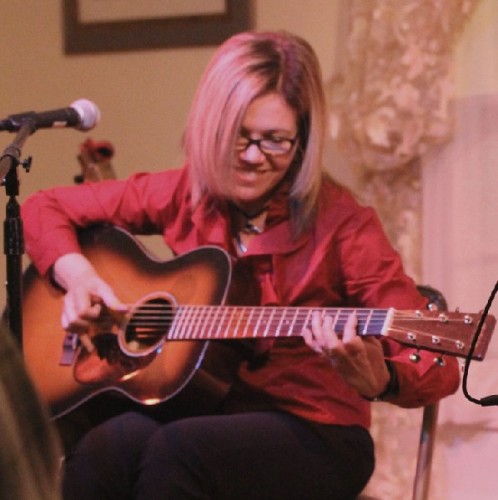 ...deftly finger-picking the melody as if it all came to her naturally. - photo by Mark Peters 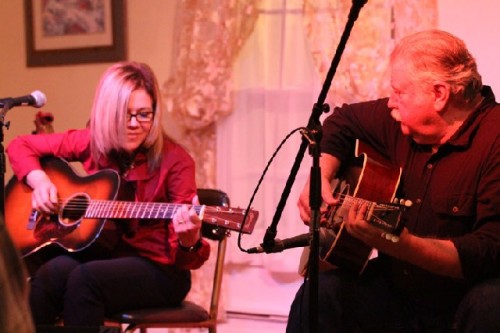 To quote Marylou, - "What an honor, to get to play with Paul Geremia" - photo by Mark Peters 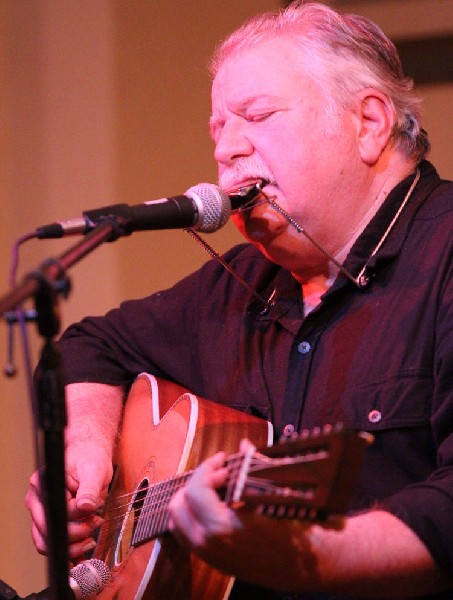 It had been a long time since I had last seen Paul Geremia... - photo by Mark Peters 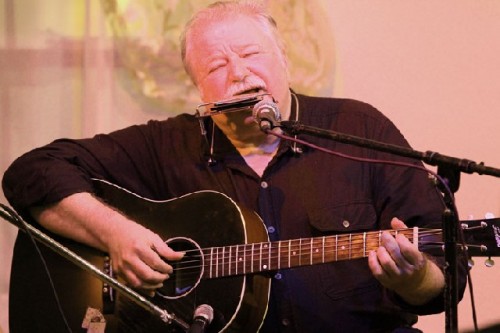 Paulâ€™s set included standards from the repertoires of several of the icons of country blues... - photo by Mark Peters 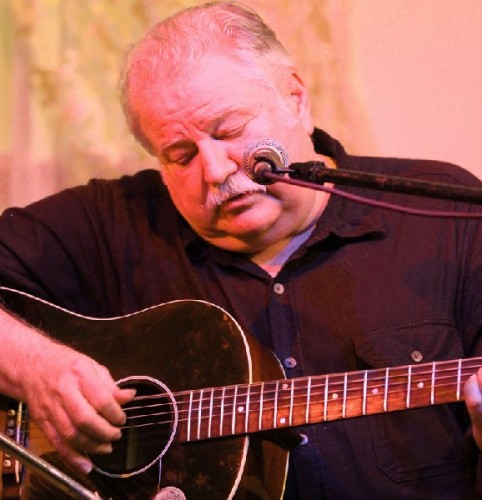 His singing voice was strong and clear. - photo by Mark Peters 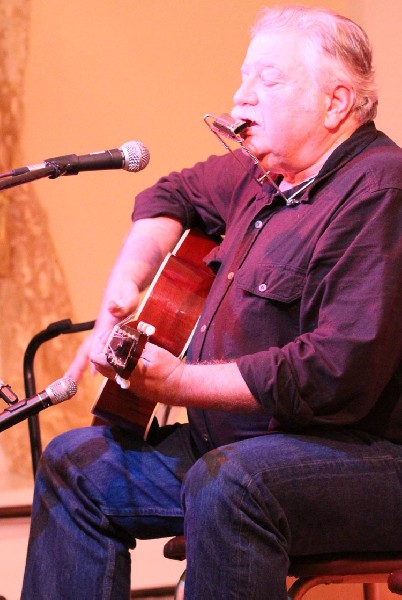 His accompaniment on the harmonica is consistently understated... - photo by Mark Peters

It had been a long time since I had last seen Paul Geremia, 40 years a conservative estimate and bit longer than that since I had last heard him perform. Since I had reinitiated my interest in the folk genre a few years ago, I was aware that Paul was still performing and that he had become a cult icon. Even Dave Van Ronk, in his autobiography, had speculated that Paul, might be the best blues performer extant.

In July or August, when I saw him listed to perform at the Bull Run in Shirley mid-December, I wrote it into the calendar as a must attend.

This was the first time I attended a performance in Bull Run’s upstairs Ballroom, a much smaller space than the Sawtelle room that I have visited several times in the past. The Ballroom seats about 65 with a stage at one end and an entrance via an anteroom, a sound booth and serving area at the back. It provides an intimate setting with the possibility of an easy back and forth between performer and audience.

On entering the anteroom from the hall, I saw Paul sitting off to the side and reintroduced myself to him. Now at one time we had been fairly casual friends with an easy manner between us. I hoped for the same, but experience has taught me that the strength of even once quite hearty relationships dwindle with the memories of same over 40 years. When I handed Paul my card, his eyes narrowed, he cocked his head and fixed his gaze on me and then the slow Geremia grin and the drawled, “never would have known ya.”

As we proceeded to reminisce I heard from the next room the voice of a woman singing and intriguing as it was I nonetheless wanted to spend a few moments catching up with Paul and indulged myself. Several times Paul and I would pause to listen to a musical passage that came through the closed door and Paul finally said to me, “You really should catch her set, she’s damn good.”

I nodded, assured him I would stop by after, and went in to catch the remainder of Marylou Ferrante’s set.

Immediately I found myself regretting that I had delayed my entry. Marylou seems anything but the typical blues singer.  She is neither brassy nor bold, not strident, not flashy, no gimmicks, no tricks. She sings with a clear well tempered and engaging voice. Her articulation is straightforward, her inflections and her phrasing suited to the emotional content of her material. She is accomplished on guitar, fingers fretting nimbly; deftly finger-picking the melody as if it all came to her naturally. Marylou’s stage presence between songs is demure, diffident and un-dramatic. Her introductions were simple and informative.

Hearing her version of “Red Rocking Chair” with banjo accompaniment brought Karen Dalton to my mind, though it was the emotional textures rather than any similarity of vocal styling that cued the memory.  I was delighted that an impromptu and charming duet with Paul provided the transition from her set to his.

It is unclear why Marylou has yet to record, and hopeful that this is soon to be remedied. I look forward to her future performances and since she resides in the Worcester area, that might be often.

Paul’s set included standards from the repertoires of several of the icons of country blues including Leadbelly, Pink Anderson, Percy Mayfield, Charlie Patton, Skip James, Babe Stovall and finally as an encore, Robert Johnson’s “In My Kitchen.” Throughout the performance his singing voice was strong and clear. Paul never tries to emulate accents or dialect. He sings the songs as if they were natural to him in his natural voice. The result is an authenticity that is often lacking in the performances of some blues singers, any number of whom think they honor the source by emulating cultural affectations.

I missed a couple of his sources for during some of his soft spoken introductions, there was considerable bleed through of loud rock music coming up from the performance room below. Paul dismissed the interference with a brief quip and while it interfered with some of his introductions, his singing dominated the room sufficiently to block out any interference from the other band.

Gone is the slight boyish lad with the diffident grin I remembered so clearly from our earlier days. This Paul was larger in girth and larger in presence, carrying himself with the care that all of us of advanced years have learned to use with our less flexible joints and stiffer muscles. From the stage he dominates the room with an affable and open manner as if we all were just sitting around his or our kitchen table.

As an artist he has matured greatly since those greener years and I left after the performance and several more minutes of jawing and memory swapping, pleased with what I had experienced and hopeful it would not be the last time I had the pleasure of listening to Paul Geremia.

If you have never heard either of these exceptional artists, here are a few links that will introduce you to their performances. Judge for yourself.