Body & Soul at Museum of Arts and Design, NYC 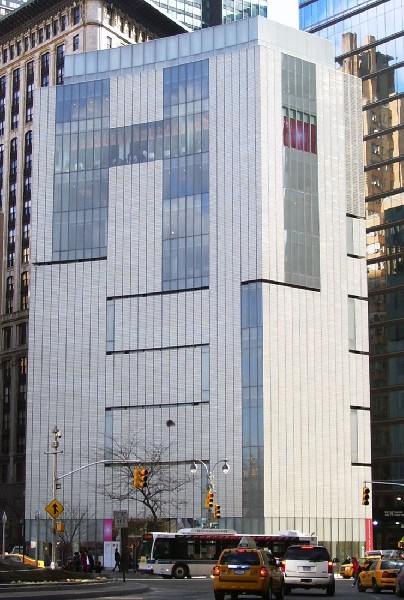 Musem of Arts and Design, NYC. Photos curtesy of: MAD, artists and/or A. Hiemer 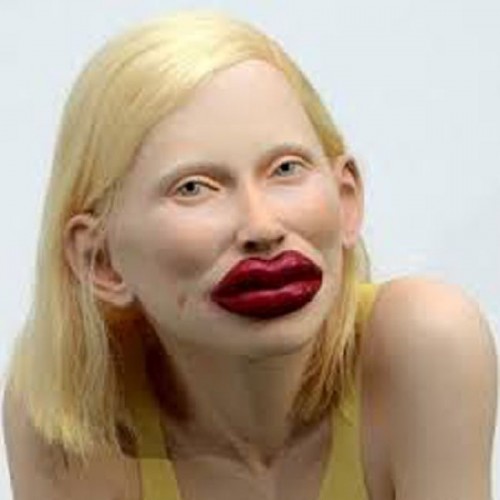 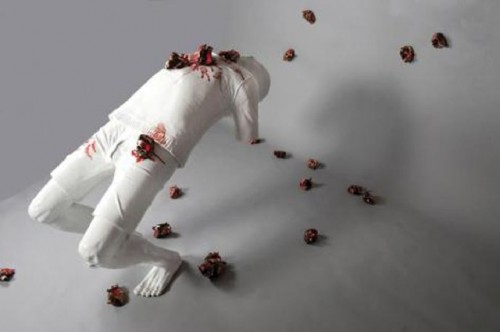 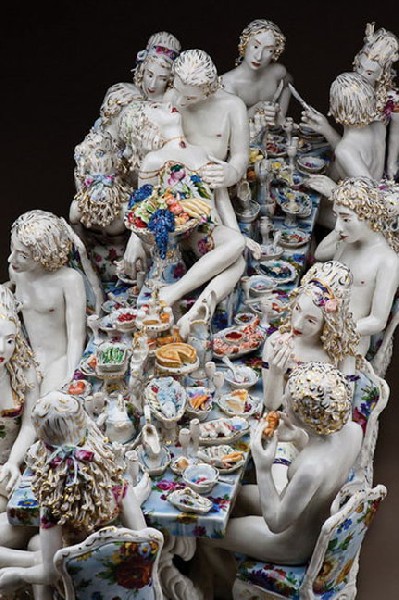 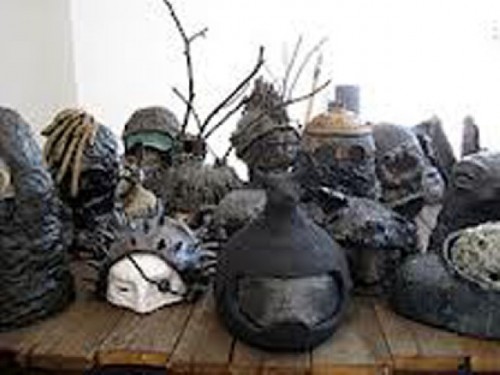 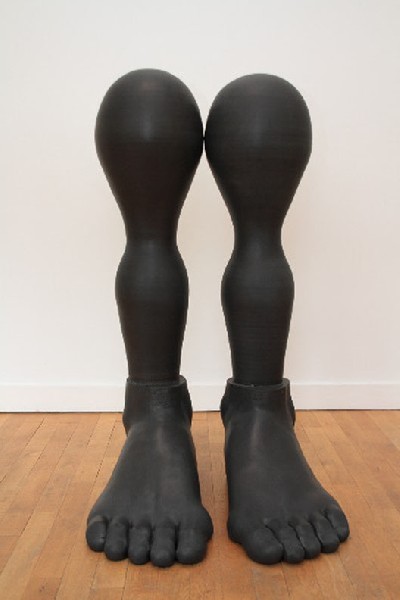 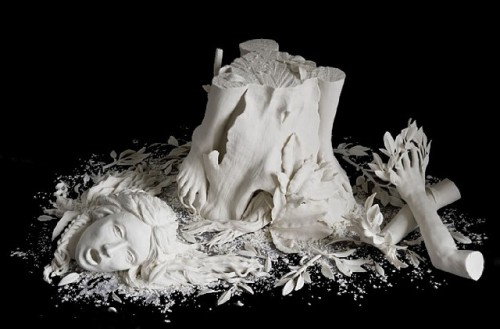 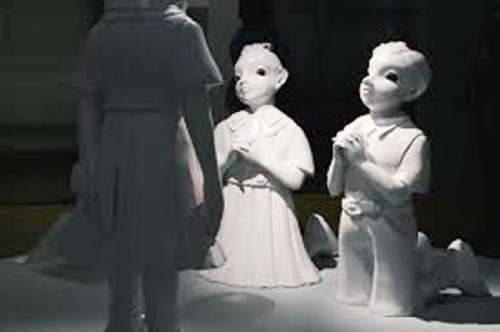 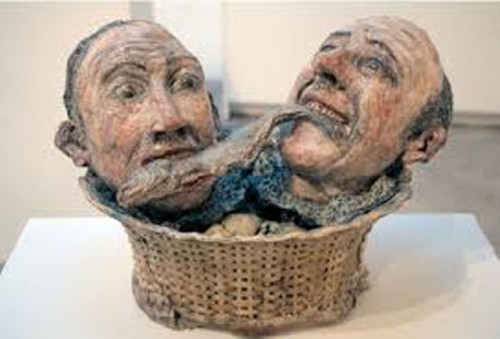 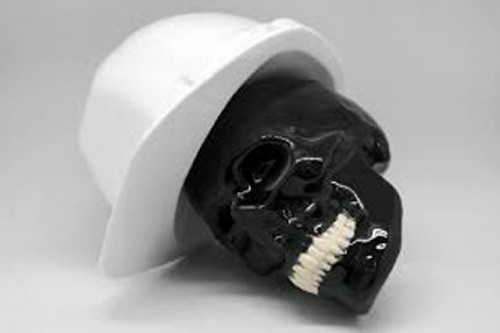 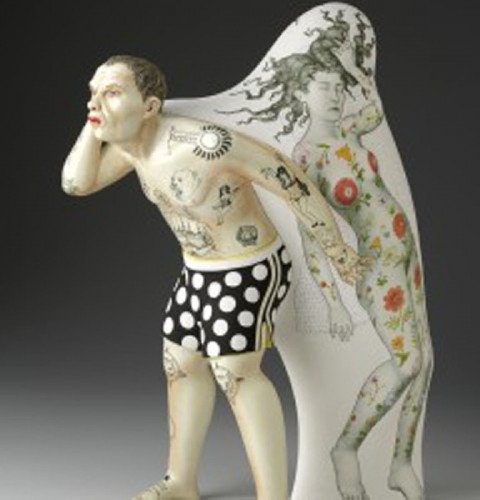 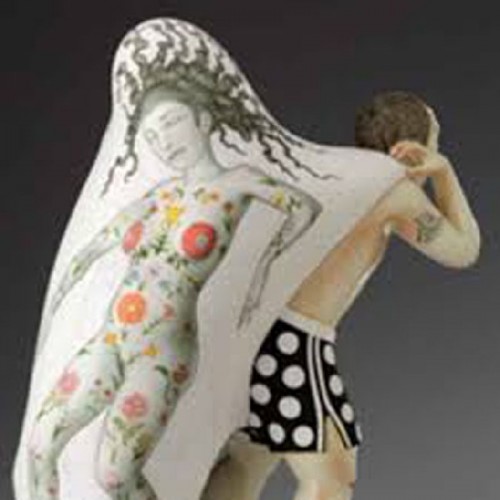 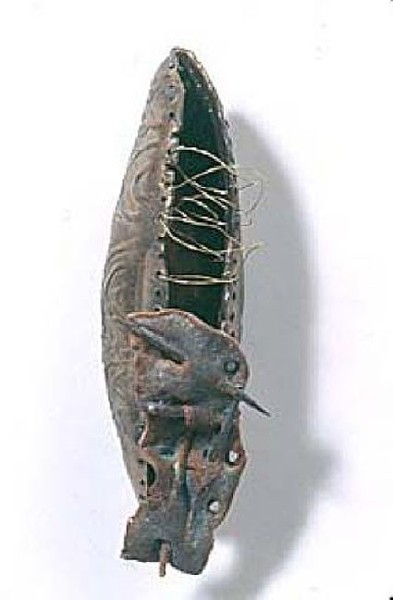 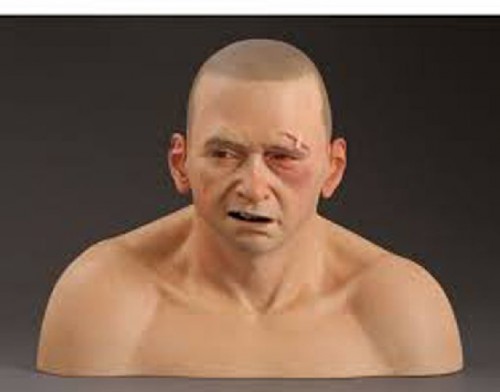 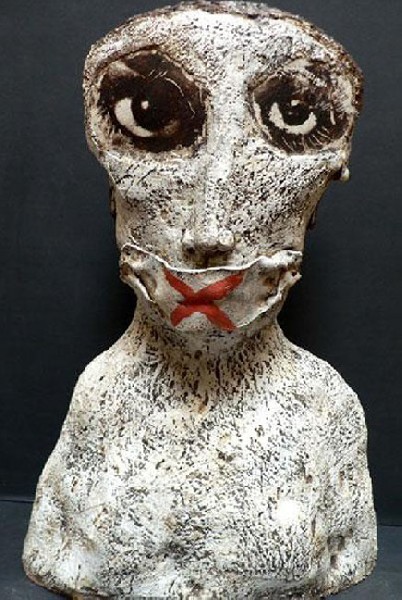 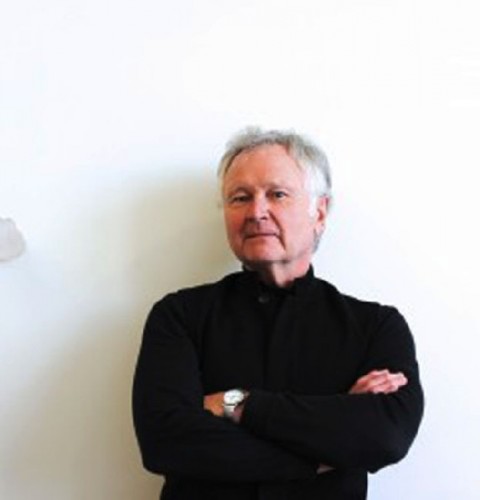 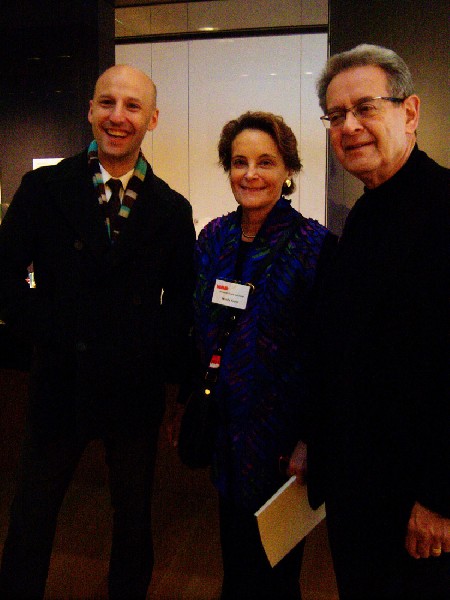 Sculptural and figurative ceramics are again enjoying recognition in the ebb and flow of art movements. The Museum of Arts and Design (MAD) in New York City underlines the claim with the exhibition: Body & Soul, currently on view. Chief Curator at MAD, David McFadden, welcomed the exhibition and artists from around the globe.

The American team of curators Wendy Tarlow Kaplan and Martin Kaplan, and the French curator Laurent de Verneuil set out to identify exceptional national and international artists, who are working in ceramics and related media, and, who express themselves beyond aesthetically pleasing objects with Body & Soul.

Stepping into the exhibition one is confronted by a girl, who is holding a revolver behind her back – not visible at first sight. Two children are kneeling in front of her, obviously pleading. The two children’s eyes are made of glass - the aggressor’s eye sockets are empty. She has no soul.

The Finnish sculptor, Kim Simonsson, creates in white, glazed stoneware situations, depicting children, that are unfortunately and universally played out today by children and adults. “Carrie II” (2009), who has had paint dumped onto her head and hair, stands there as a symbol against bullying. The pieces are executed in simple, clear lines, three to four feet tall.

The exhibition includes more than 60 individual works or installations by 24 artists, approximately half European, many working in France, and half from the USA.

Saverio Lucariello, Italian/ French, sets up several grotesque tableaux, where heads, made after his own image, appear out of baskets, or three feet which support a bucket below and crudely formed heads and vegetables peek at the viewer from above the blue bucket, titled: “Tripod” (Tripode, 2010). Another sculpture shows nine heads regurgitated from a large mouth. Lucariello’s sculptures submit smiling, crying, dead or live faces. Perhaps, they are comments on the many facets and faces of life.  His sculptures elicit strong feelings that remain unresolved.

Sana Musasama’s small elongated sculptures are titled: “SameSame,” “Pins and Needles,”  “Cut” and  “Stapled Shut” (2011-2013). Visually they are less impressive than what they symbolize – circumcision.

This American artist, a world traveler, experienced a serious change first hand in young girls, her friends and guides of the Mende People in Sierra Leone, where she lived for a period of time. They had disappeared for three months and returned as different human beings, avoiding her. They were turned into women by rituals and circumcision. Only years later did she realize that circumcisions had taken place, a ritual in the headlines today that is being discouraged and outlawed as dangerous and female oppression.

Michel Gouery’s tall sculpture “David and the Eye of Goliath” (David et l’Oeil de Goliath, 2012), was assembled from three or more pieces. The spear extends the work to nearly 8 feet. The body appears to be made from string clay, enameled terracotta.  The outside glaze lends some color, in white, green and muted red tones to the otherwise dark work. Cork screws, white, black and yellow are attached to his head, another playful gesture. One foot rests on Goliath's big, white, blue and red eye ball. It’s a menacing piece, yet presented in a light-hearted manner.

The installation of “Riri” and ‘Fifi” (2006), their bodies are approximately 4’ tall, by the same French artist is augmented by four totem poles. Again, big-ball eyes are placed at “Fifi’s” feet. Both bodies and two totem poles have neat indentations made by a piece of plastic and both figures are missing faces. Here, the white dotted texture makes the works unreal and fantastic.

Anne Rochette’s work "Upstream and Down (for M) #2” (Figure de l’Amont (pour M) # 2, 2010) evolved into a very personal meaning, in memory of her father. A male figure is placed onto a very tall earthenware pedestal in black and red colors. Several fishes are streaming from his mouth, possibly the Fisher King or her father, who loved going fishing. Glaze appears to have been poured over the sculpture of nearly 8’ in an irregularly dense manner.

Elsa Sahal’s “Black Feet” (Pieds Noir, 2010) stand there massive and strong! Stoneware formed feet and skittles attached to the feet confront the viewer. A black, very bleak sculpture. Immigrants to France from North African colonies were greeted in the 20th Century as “Pieds Noirs,” their lives and integration made difficult, which remains one of France’s challenges to date. Sahal’s family experienced the process, suppressing the memories of hard times.

Several artists are presenting heads only: Teresa Girones, who is Catalan and at 72 the oldest participant, is showing three women, all titled “Victim” (Victima, 2012). Their immense, sad eyes are speaking to the viewer and different symbols, marks on their bodies, indicate their suffering.

Daphne Corregan’s two works from a current series of large heads on wooden pedestals, which are placed at eye level, are spontaneously painted and titled “Painted Face” and “Smeared Face” (2012). As other ceramicists she expresses the need to work and form with her hands to release emotions, pointing out world conditions or reacting to personal situations.

Tip Toland’s bust of “Boxer” (2010) is an astonishing life-like figure with a cut above his left eye and bruised eye and face. The artist writes that she “...wanted to make a bust of a man who appears defeated yet equally determined to fight to the end.”

Marc Alberghina’s busts bear his face and hair style with shields attached to their noses, open mouths, yet prevented from screaming. He exhibits three self-portraits, their hearts have been ripped out and he seems to cry out: “Bystander don’t turn a blind eye. I was what you are and you will be what I am,” as de Verneuil writes on behalf of the artist in the exceptionally well presented catalogue.

Black sculls with attached white protective helmets are titled “Forget” (2010) by Mounir Fatmi, a Moroccan/French sculptor. The installation of 10 or more pieces, placed on the ground, was first exhibited in Johannesburg, Cape Town, and is a memorial to African mine workers. One could extend the meaning easily to mine- and construction workers, who toil world-wide under dangerous conditions.

A relief from the seriousness of some installations appears to be at first sight “Feast of Impropriety” (2010), by Chris Antemann in collaboration with Kendrick Moholt  - yet it is not. I have seen her work repeatedly and experienced strong emotional dislike for the elaborate 19th Century feasts or other improper dalliances, which, of course, is her intention.

Actually, I found it easier to look at the large photograph nearby, which depicts the work. White, naked figures with golden hair in various couplings gorge on many colorful edibles on fancy dishes.

Antemann is represented in MAD’s permanent collection with: “Lust and Gluttony” (2008). She works currently at Meissen artCampus in Germany on a large scale installation, titled: “Forbidden Fruit, A Porcelain Paradise.”

The American Antemann forms one of a kind figurines, whereas British artist, Jessica Harrison, buys on e-Bay and flee markets, the original mass produced figurines, women with flowing skirts. Works in the 2013 series on exhibition received bloody disfigurements: Perhaps an opened throat, intestines carried in a bowl, a ripped out heart. “Clare” haunted me. She has a red flowing skirt, her hands lifted up in the air as so she is dancing a Tarantella. Yet her fingers are finely chiseled to the bones with blood running down her arms, coloring the white blouse red.

Sergei Isupov, Russian/American, is a fine draughtsman, painter and ceramic artist. Here, he shows relatively small works in porcelain, approximately two feet tall. His ceramics are exquisitely painted from all sides. In “The Orchard” (2012), a man in white dotted black shorts with many generic tattoos all over his body is lugging a big ‘bag’ on his back. In fact Isupov painted a naked fair maiden onto the ‘bag,’ her body is adorned with beautiful flowers.

Two artists reach back to Greek mythology to express contemporary issues. Akio Takamori, Japanese/American, presents “Nymph and Satyr” (2011), stoneware with underglazes. He writes that he “...wants to create human figures that stand at the crossroad between accumulated history and individual identity.”

And Kate MacDowell, American, created “Daphne” (2007), in white hand-built porcelain, shattered into pieces and many shards. Her finely formed head is placed on the ground, arms and legs are growing leaves; there is a tree stump. Here the myth is highlighting current environmental disasters. The artist hikes in Oregon and Washington State mountains and has encountered clear-cutting in various areas. The destruction of forests is a global issue.

“Grace Flirts” (2008), Tip Toland’s stoneware sculpture of a very blond young girl, placed on a spring board, is amost life-like, four feet tall, except for her oversized bright red lips! She’s ready to jump into an adult life-style but is a bit too young, perhaps. Her arms are still clinging to her body.

The youngest participant in this exhibition ,Coline Rosoux, is not yet 30 years old. She is presenting “The Assault” (l’Assaut, 2010) a collection of heads or masks of worriers, rebels, or perhaps contemporary activists, which are placed on a roughly made wagon. They were throughout centuries or are today the voices and fighters against the establishment.

Finally, Valerie Delarue shows a 20 minutes video performance, titled: “Body of Work” (Corps au Travail, 2010), where she is ‘trapped’ in a clay chamber, naked. She cavorts, plays, scratches at the walls, attempts to build and escape; the pace of her activities ever increasing spontaneously. She is conveying “...a celebration of the individual human will.”

All ceramicists in this exhibition come with impressive resumes, documenting extensive works and exhibitions. For the first time, many of the international artists’ sculptures can be seen in the USA. They are visually compelling and Body & Soul will leave the viewer with new insights marking the global human condition.

A You-tube video from her extensive life's work by Teresa Girones.