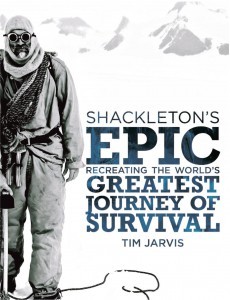 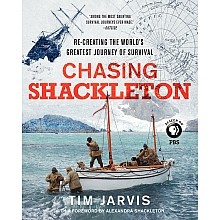 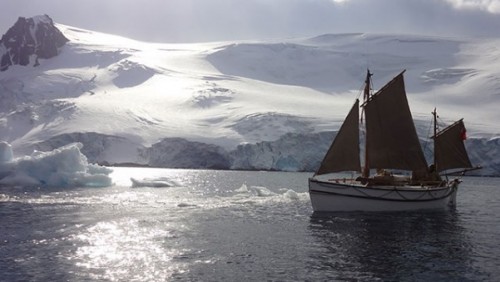 CHASING SHACKLETON, a new three-part series about a modern expedition that follows the path of history’s most extraordinary survival story, will premiere January 8, 2014. The series follows a crew of five intrepid explorers led by renowned adventurer, scientist and author Tim Jarvis as they re-create Shackleton’s epic sea-and-land voyage in a replica of the original explorers’ boat, using only the tools and supplies his team used.

Sir Ernest Shackleton’s Trans-Antarctic Expedition, which launched in 1914, met with disaster when his ship The Endurance was crushed by arctic ice and sank.  His heroic leadership in the face of almost certain death saved the lives of 27 men stranded in the Antarctic for more than 500 days, and has inspired explorers and leaders across every continent over many generations.

Jarvis’ team’s recreation included crossing the treacherous Southern Ocean from Elephant Island to South Georgia (800 nautical miles) in a small wooden boat while battling gales, rough seas and stomach-churning swells.  Once on land, the crew faced weather conditions they described as “Scotland on steroids” — simultaneous high winds, torrential rain, snow, hail and ice. When the weather eased, Jarvis and two teammates (Barry Gray and Paul Larsen) trekked inland to reach an old whaling station at Stromness on South Georgia, traversing an icy, crevasse-riddled mountain range in unmapped territory, the route Shackleton and his men took as their only hope for rescue almost a century ago.

“Every time we thought we’d won, another obstacle presented itself,” Jarvis said, referring to several incidents shown in CHASING SHACKLETON, including the crew’s encounter with a lake they expected to be a glacier (it had since melted) and a home-stretch climb that led to a nearly impassable, 1000-foot drop that took three terrifying hours to descend.

“We are so pleased to be working with PBS on this unique project,” said Sam Maynard, Executive Producer at Raw. “It has been an incredible undertaking to film this modern-day exploration of a true story of unparalleled bravery and physical endurance.”

The expedition, which occurred over three weeks in early 2013, had been in development since 2008 when Shackleton’s granddaughter Alexandra approached Jarvis with the idea to honor her grandfather and his heroic achievements.  After agreeing to the challenge, Jarvis selected a team of British and Australian adventurers based on their determination, passion for adventure and their sailing and climbing skills.

“One of the most crucial decisions Shackleton made during his expedition — indeed, pivotal to his success — was his choice of crew for the James Caird,” Jarvis said, referring to the 22.5-foot wooden lifeboat that carried a small team of survivors after The Endurance was crushed and sank.  While Jarvis’ crew had its share of differences en route, he says the team’s general accord was a necessary element.  “When you’re constantly worried about dying, you don’t really have time to disagree,” he said.

Jarvis’s vessel, named Alexandra Shackleton, was an exact replica of the James Caird, from its hand-stitched sails made from 1914 sailcloth down to the brass screws that held its wooden planks together. To complete the authentic experience the team used 100-year-old equipment, navigational tools and period clothing that, perhaps, helped them unlock Shackleton’s survival secrets, and gain insight into the original crew’s courage. State-of-the-art cameras were built into the boat and expedition cameraman/director Ed Wardle joined the crew to capture the action as it happened.

Tim Jarvis AM is an environmental scientist, author, adventurer and public speaker with Masters Degrees in environmental science and environmental law. He is committed to finding pragmatic solutions to major environmental issues related to climate change and biodiversity loss and uses his public speaking engagements, films and books to promote progress thinking in these areas. Jarvis recently was named the 2013 Adventurer of the Year by Australian Geographic and awarded with the 2013 Sydney Institute of Marine Science Emerald Award his for conservation work. He was conferred a Member of the Order of Australia (AM) for services to environment, community and exploration in the 2010 Australian honors list and was made a Fellow of the Yale World Fellows Program, 2009 based on his international leadership in the field of environmental sustainability.

CHASING SHACKLETON is part of PBS’ ongoing commitment to present the best science and nature programs on television.  Throughout 2014, PBS continues to expand its popular, acclaimed Wednesday night programs into the 10 p.m. hour to build thematic nights around key new anchor miniseries with audience favorites NATURE at 8 p.m. and NOVA at 9 p.m.

The four-part miniseries SUPER SKYSCRAPERS (which premieres February 5, 10 p.m.) follows the creation of extraordinary buildings expected to revolutionize the way we live, work and protect ourselves from threats both natural and man-made, while that same night at 9 p.m., NOVA begins a series of new math and engineering-focused programs, including “Catacombs: Roman Plague” (w.t.), followed by “Mystery of the Duomo” (w.t.) on February 12 and “The Great Math Mystery” on February 26.

YOUR INNER FISH (which premieres April 9, 10 p.m.), based on the best-selling book by Neil Shubin, travels from Africa to the Arctic Circle to uncover the 3.5 billion year history of the human body — and how a colorful cast of ancient characters made us who we are today. YOUR INNER FISH airs alongside related programming from NATURE and NOVA, which will premiere “Bionic Animals” (April 9) and “Inside Animal Minds” (April 2-16), respectively.

Coinciding with the PBS series, a companion book titledCHASING SHACKLETON: Re-creating the World’s Greatest Journey of Survivalwill be released by William Morrow publishing on January 7.  This book, excitingly written and richly illustrated, details every stage of Tim Jarvis’ epic journey. Packed with images of both the original voyage and its modern recreation, CHASING SHACKLETON is a visual feast for readers and historians alike, as well as an essential companion to the story that has inspired adventurers across every continent for over three generations. For more information on the companion book, CHASING SHACKLETON, please visit http://shackletonepic.com/ .

PBS Distribution will release the DVD version of CHASING SHACKLETONon February 4, 2014, after the PBS broadcast. The DVD will be available for a suggested retail price of $24.99. The running time is 180 minutes.