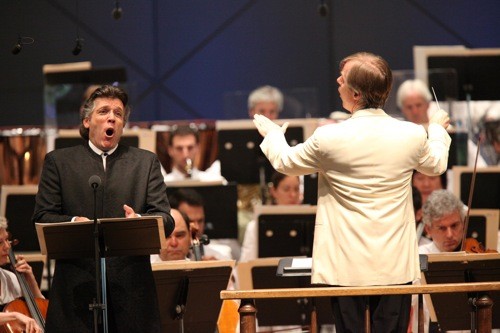 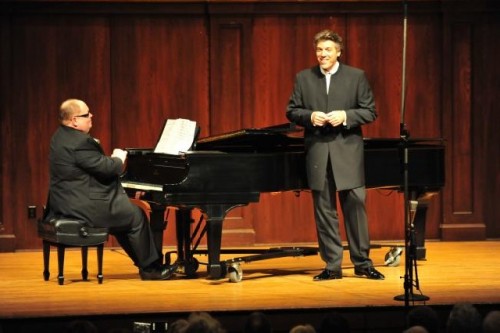 
Thomas Hampson has sung at the Metropolitan Opera for twenty-five years, a reliable lyric baritone who is often inspired and gives his all.  What drives his career is clearly a love of music, and a commitment to making culture a part of ordinary lives.  While the Met may not be the best launching pad for a common touch, Hampson has always used the reputation he has garnered there to extend the pleasure of music to nooks and crannies throughout the world.

Notably, his project to discover and promote local songs from each state throughout the US has been joined by the Library of Congress. The Massachusetts prong of this effort was wonderfully performed at Tanglewood.

The first master class Hampson live streamed from the Manhattan School of Music was for instrumentalists.  His wide-ranging knowledge, his curiosity and his generosity were on stunning display. Master classes are a must for any aspiring musician, whether or not you participate.  Watching a performer start with a piece, listen to suggestions and then play again is a jam-packed music lesson.

Hampson, like James Levine, to whom he referred repeatedly and gratefully during the Met Guild program, emphasizes the melodic line, not only for singers. At the Manhattan School, that was the most fruitful idea Hampson put forth. The change in performance after warm coaching from the master was notable. Hampson now regularly live streams his master classes.

Watching video clips of Hampson’s performances throughout the world, first in Mozart, and as the voice has deepened and become richer, more frequently in Verdi and Tchaikovsky as well as Britten, there is no question about Hampson's innate and considered melodic strength.

Even later than Stephen Costello and the Crofts who were plucked out of choruses and high school musicals, Hampson finally came to a career in music. Although he was clearly born to sing, he did not accept the gift as career until he had wrestled his father to the mat, touting the possibility of doing no harm by signing a contract with Dusseldorf’s Deutsche Oper am Rhein.

Already educated in political science and public administration, he figured he could run a symphony orchestra if worse came to worse.  Having observed general managers up close and personal, he declared this a thankless job he would not entertain. Of course, he would be a great general manager: he can sell the opera form because he understands and clearly loves music and singing. He would be a great choice as artistic director in the right house. Or at least a Sills/Fleming type ambassador for music.

Discussing the development of character, he talks about reading around the role:  Shakespeare is obvious as he sings Macbeth currently. He was an evil and fully developed Iago in a great performance in Zurich in January.

Performing live with Craig Rutenberg, head of the Met's music staff, Hampson sang the songs of Liszt, Barber and Cole Porter.  In this wide-ranging repertoire, Hampson's beautiful baritone and comprehensive understanding were on full display. Afterwards he commented that he has never sung Liszt and Porter in such close proximity, but he succeeded in selling them well together.

The moving program ended with a Mahler song.  Clearly Hampson has great feeling for this composer. When he first sang for Leonard Bernstein, he chose Mahler.  At the conclusion, Bernstein asked: how did you learn to sing that piece.  Hampson wondered if he had done something wrong. Oh no, smiled Bernstein. It had been perfect. That was the beginning of a beautiful friendship.

Hampson's feeling for Mahler is famous. That he brings so much feeling to every composer he sings shows how profoundly musical he is.  Yet he has time for golf.  He reports that his backswing has shortened over the years, but that he will use a golf ball bearing the Met logo for putting. His self-deprecating sense of humor backed by an admittedly burning ambition has propelled Hampson into the forefront of the music world. It is his generosity in sharing his talent and knowledge that the Metropolitan Opera Guild put on display.  A young pop singer sitting next to me was prepared to try opera after listening to him.  Mission accomplished.