Chawky Frenn â€“ We the People 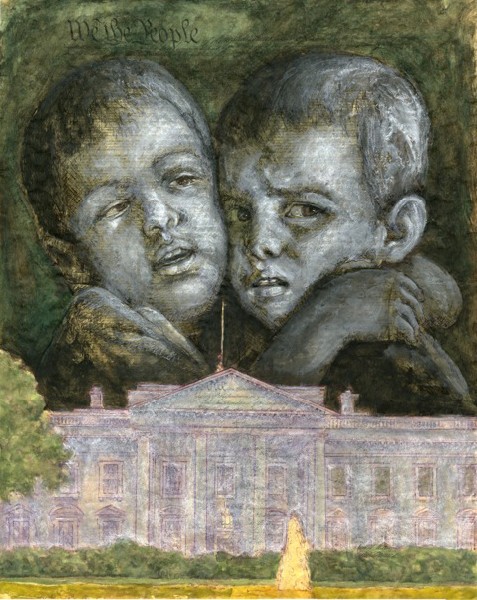 Images courtesy of the artist and Milton Academy. 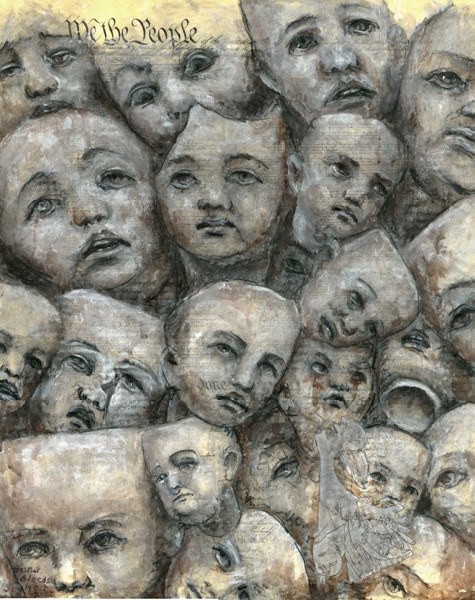 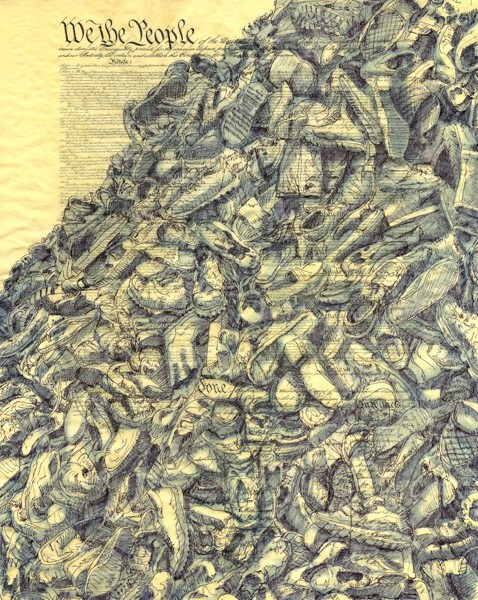 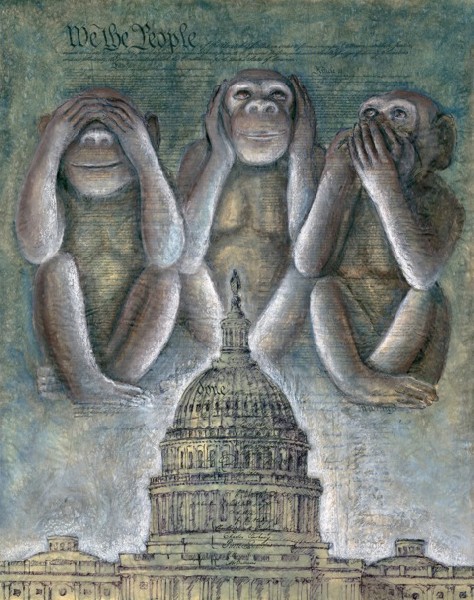 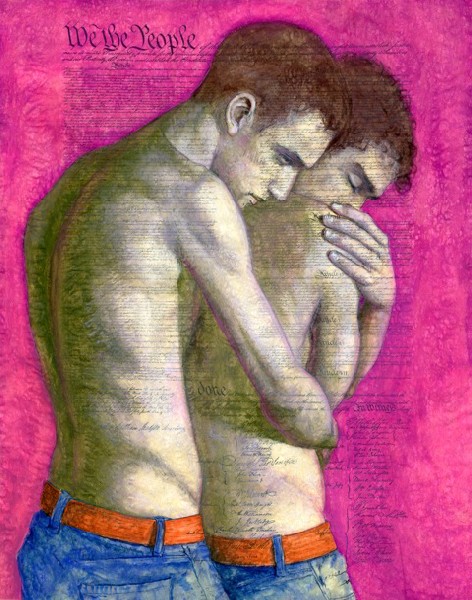 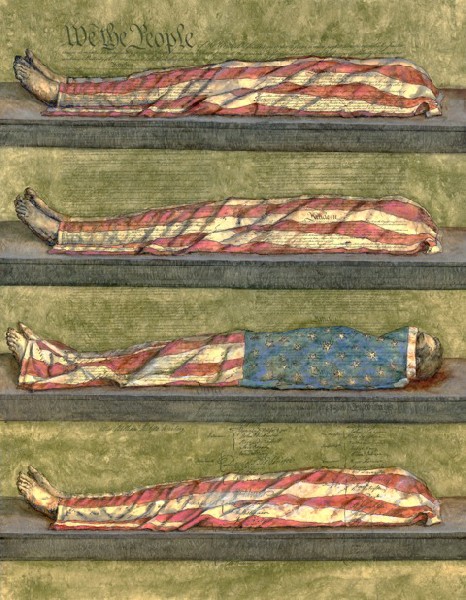 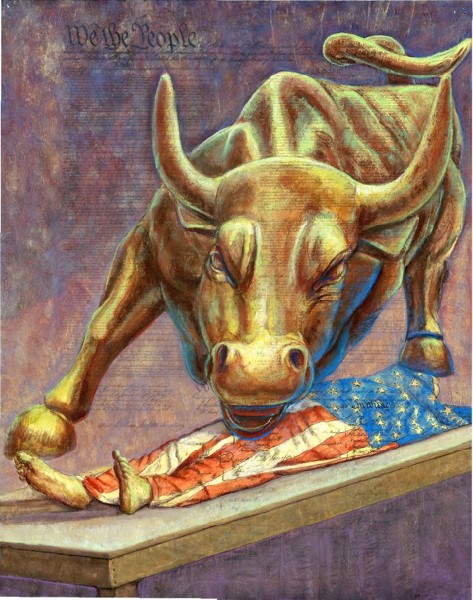 The Nesto Gallery at Milton Academy presents We the People by Chawky Frenn. The opening words of the Constitution of the United States, We the People, have inspired visual reflections on the history, principles, visions, costs, and challenges confronting our democratic ideals and values since the founding of our republic. Powerful images drawn and painted directly onto parchment reproductions of that sacred document are paired with quotes from US presidents, lawmakers, justices, historians, journalists, writers, scientists, artists, economists, and peace activists. Quotes also come from people who transcend their tribal, religious, racial, national, and gender barriers to become universal voices for peace and human rights.

Frenn exhibits extensively, nationally and internationally. For Life’s Sake, a monograph on his work, was published in Beirut, Lebanon, in 2006. His work has appeared in many publications, including Male Nude Now in 2001, and 100 Artists of Washington, D.C. in 2011. He is the author of two new books 100 Boston Painters and 100 Boston Artists, published in 2012 and 2013 by Schiffer Publishing. He is a professor at George Mason University in Fairfax, VA.

Frenn is a humanist painter whose art is a voice for justice, peace and human dignity, against man-made horrors inflicting our world. He writes: “The source of my art is love for humanity, an awareness of the interconnectedness of all people and nature, and a recognition that people have similar basic rights, needs and aspirations. My engagement is fueled by a belief of the difference that each one of us can make to be a bridge and not a wall, to be balm and not poison.”

We the People is a visual meditation on social, political, and economic issues that affect all of us, all the time. Combinations of images and words examine who we are, what we stand for, our legacy, and what we really want to achieve. Our inalienable rights were fought for, not ceded to us by the privileged. Democracy triumphs when equal rights for blacks, women, minorities, Native Americans, gays, and immigrants are achieved. But overcoming obstacles and securing these liberties is not a fait accompli; challenges persist which present us with opportunities to affirm our commitment to an accountable, just democracy and to a sustainable, equitable economy.

Since the conception of the Constitution, unrelenting problems have threatened our republic –business interests dominating legislature; profits influencing policies; and power displacing justice. If We the People do not remain vigilant, entrenched financial powers will dehumanize our democracy, violate human rights, and destroy our environment.

Do we have the political will to implement laws promoting human rights over profit and consumption? Whatjustice advocates the financial industry’s manipulation of environmental, commercial, and international laws to achieve biased regulations? Under the banner of progress, powerful nations and global companies enforce holier-than-thou laws, displace the disenfranchised, and rape their land, history, and rights. Why, despite our professed ideals, does Columbus Day remain a holiday? Why do we celebrate the coercion of the Native Americans? Such selective recognition of human rights damages the credibility of our nation’s moral authority. From the perspective of the aboriginal, poor, and developing countries, history looks like a scandalous charade.

We the People is a plea for earnest self-criticism and an urgent request to go beyond self-righteous justifications to the heart of the truth. We can prevent future failures by learning from the past and examining our present. Intentionally untitled, these images invite you to encounter and reflect on your own thoughts and emotions. Your interpretations reveal what is in your mind, not the artist’s heart. This series aspires to promote ideals that continue to inspire people around the world, and seeks to stimulate candid dialogue that will lead to a more just, peaceful, and sustainable world!

We the People! How inadequate I am for this task! Who am I? I am a painter who knows little about human rights, public policy, or politics yet feels deeply moved by the injustice done across the globe. I am a vessel, a channel. When I was a boy, I felt a deep yearning to serve God. Years later, this service is manifested in my love of and faith in humankind as my life and art become testaments to human rights and dignity.