Flush With the Walls 40 Years Later

Does the MFA Give a Crap About Boston Artists 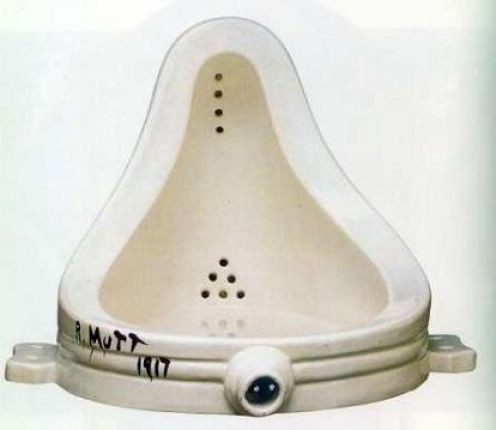 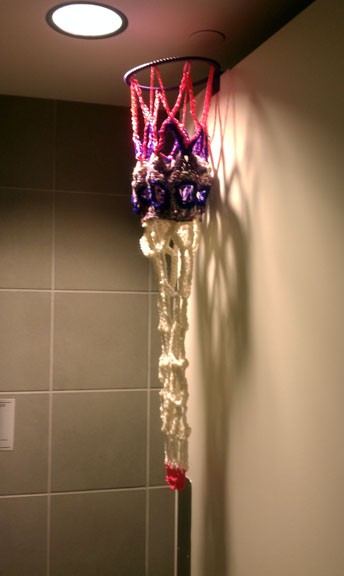 Shooting hoops in the men’s room of the MFA. Sarah Hwang photos. 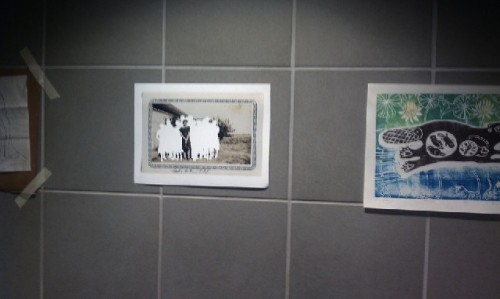 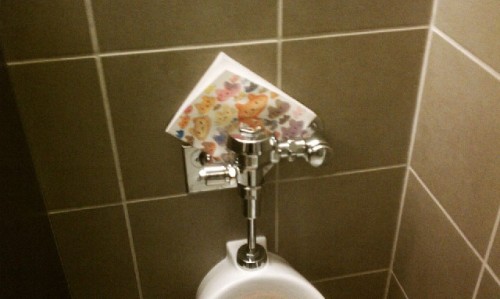 A cat comic book by Dan Moynihan rather casually installed. 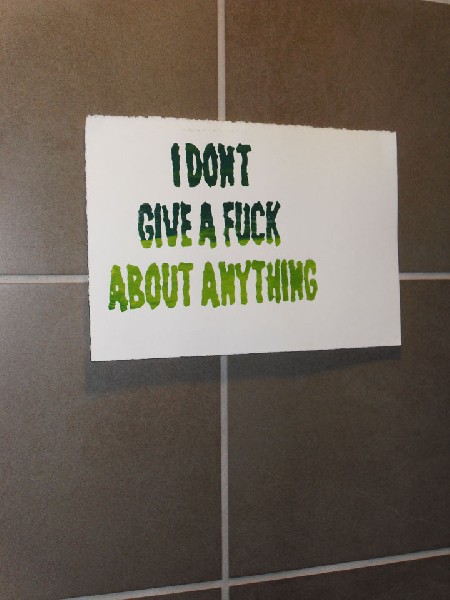 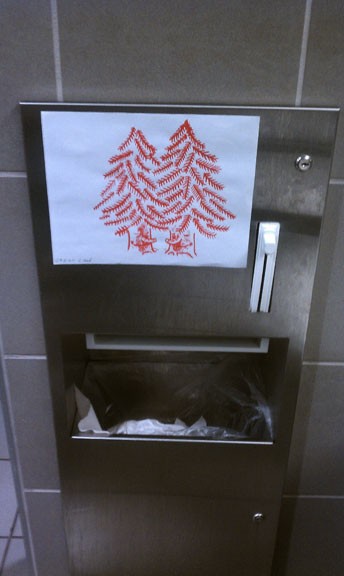 A work by Greg Cook who organized the event. 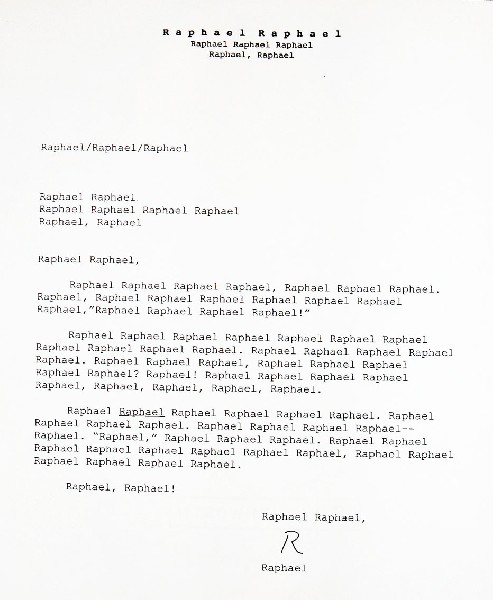 David Raymond’s Raphael letter was posted during the first Flush with the Walls event. 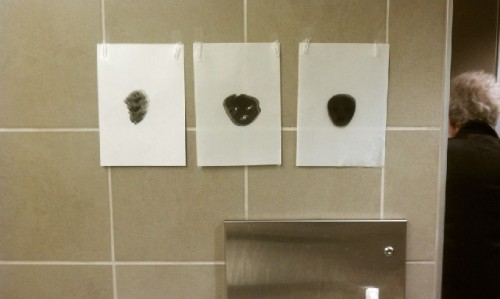 Jo Sandman participated then and now. 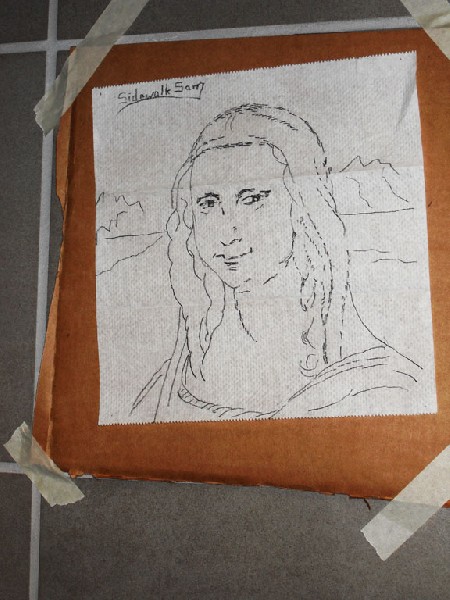 Robert Guillemin was an original participant now signing his work as Sidewalk Sam. 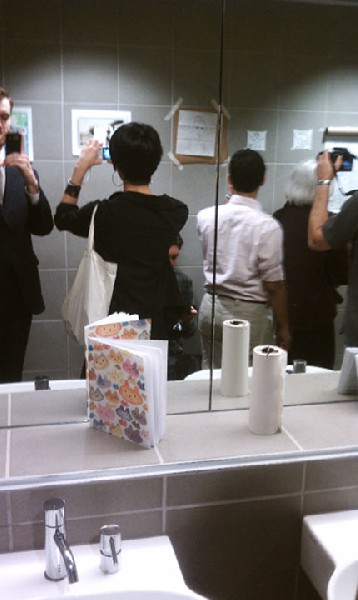 Reflecting on art at least for 20 minutes at the MFA.

June 15, 2011 will most likely go down unnoticed by many people in Boston and especially the MFA (Or they’ll choose to ignore it). But those in the know will remember it as another memorial event in art history. Last night, as the Museum proceeded to give tours of the new Art of the Americas wing to its members and request donations from visitors in exchange for free admission (the woman at the front desk informed me that Wednesday evenings are “donation” nights), another renegade exhibition occurred in the MFA’s restrooms—this time in both the men’s and women’s and located halfway down the stairs to the Chihuly exhibition in the new Shapiro Family Courtyard.

Best of Boston 40-ennial was organized by Greg Cook of the Boston Phoenix as a celebration of the 40th anniversary of the infamous (or maybe not so much) Flush With The Walls show. While the original show only featured 6 artists from the area, Cook’s exhibition included the works of a whopping 21 artists that represent a part of  Boston’s art scene today.

The works ranged from paintings, sculptures, drawings, prints, and so on—each one just as good as and/or better than the next. A few of my personal favorites were Elizabeth Alexander’s acrylic installations spilling out of toilets, Laura Chasman’s gouache work of a Boston-beloved Sargent painting renamed Ou sont les toilettes? Homage to Sargent (translation: Where are the Toilets?), and the Institute for Infinitely Small Things’ plaque (in the MFA’s own design) dedicating the bathroom to a survivor of a LGBTQ hate crime. Some of the artists who were in the original FWTW exhibit attended and contributed new works to the event: Bob Guillemin (aka Sidewalk Sam) hung his paper towel drawings of Mona Lisa and Picasso’s palette, Jo Sandman had prints of globular faces hanging by the sink, and David Raymond’s “Raphael” letter, referring to former MFA director Perry T. Rathbone’s Raphael scandal.

During the museum's year long, 100th anniversary (1971), Rathbone unveiled an alleged portrait of Eleanora Gonzaga by the Italian Renaissance master, Raphael. It was later revealed that the small painting had been smuggled out of Italy. The museum later returned the painting. The widely reported incident prompted the departure of Rathbone and served as a signifier for much needed change.

The show officially began at 7pm and was busted at around 7.20pm. Somewhere around 50-100 people, including artists, family, and friends, attended (the Boston Globe reported about 75 in their article). There were visitors who were honestly trying to use the bathroom and were confused as to whether or not the large group of people was waiting in line for the toilets.

Greg Cook gave a speech just in time explaining that Best was supposed to be commemoration of Flush With the Walls and thanked the artists and everyone for attending. The museum guard squeezed into the crowd (right next to me), waited until Greg finished his speech, and stated that the group had to move along because the fire exits were blocked. The critic thanked the guard for being civil about the situation and encouraged him to look around the bathrooms (which he did). The crowd dispersed and that was that.

Interestingly, it seems that much of the circumstances for Cook’s show is not unlike those for FWTW. Both events occurred during a time in the MFA’s history when contemporary art was (and still sometimes is) overlooked. The original FWTW, forty years ago to the day, occurred during a Cezanne exhibit under the reign of Rathbone. This was a time when former MFA director Rathbone was introducing modern art with an international rapport to the public. The priorities for the museum were other than establishing a department committed to contemporary art.

Best of Boston happened opposite of, metaphorically and physically, a large scale exhibition featuring Dale Chihuly whose glass sculptures really just reflect Color Field but in 3D. Perhaps I am just being harsh because I grew up in the Pacific Northwest, and as you may suspect, Chihuly-ed out.

Forty years ago, Kenworth Moffett, the first curator of contemporary art, was  enthusiastic about acquiring Color Field paintings for the museum. The formalist, Greenbergian aesthetic which Moffett reflected was yielding its primacy to the emergence of Pop, Minimalism, and Conceptual art. While Moffett primarily collected abstract art for the museum his program was diverse and included guest curators. John Arthur, an authority on Realism, curated two shows for the MFA: Richard Estes and Alfred Leslie. Christopher Cook, for one year the director of the Institute of Contemporary Art and long term director of the Addison Gallery of American Art, at Phillips Academy, curated a show of conceptual work at the MFA by Douglas Heubler.

Given the reenactment of FTWT last night, arguably, the MFA hasn’t really changed much between then and now. Though I must give credit to the establishment for finally making progress in dedicating a sufficient amount of gallery space for the contemporary art department’s collection and exhibitions.

The only thing that really differentiates the two guerilla exhibitions is in its motives. FWTW was a political statement organized by the 6 artists (Martin Mull, Todd McKie, Jo Sandman, Kristin Johnson, Bob Guillemin, and David Raymond) as a response to the MFA’s and Boston’s conservatism. These artists knew that there was no way that the museum would produce an exhibition including their works and acted accordingly.  It had an objective which was realized, shortly after the action, when Rathbone announced the appointment of Moffett.

It was one of the last acts of Rathbone’s tenure. To his credit the flamboyant Rathbone was viewed during his administration as transforming the museum into a more progressive institution.

Best was more along the lines of an MFA thesis exhibition; its intentions were to celebrate FWTW in the same guerilla manner and present “the best of Boston art today.”  However, it could just be that it’s too soon to tell what effects Wednesday night’s show had on the museum and the public. Who knows? Maybe the museum will add another $50,000 to their security budget by the next fiscal year.

Nonetheless, the spirit of FWTW was alive and well among everyone who was involved in Wednesday’s event and it was wonderful. In a 1971 Cambridge Phoenix article about FWTW, Jean Bergantini-Grillo pointed out that “the men’s room seems to be the only place in the Museum of Fine Arts that an exhibit by contemporary local artists can be seen.” And 40 years later, that statement remains true. At least, until the contemporary art wing is finished. After Greg gave his speech, Bob Guillemin, with his grandchildren in his lap, thanked Greg saying “Applause for Greg for his good idea!” And indeed, it was a good idea.

Sarah Hwang has recently graduated from Boston University. During the spring semester she wrote a term paper on the original Flush With the Walls event for a seminar on Boston Art for Professor Theodore E. Stebbins, Jr. who was formerly the curator of American Art at the MFA. It is a postion he now holds at Harvard University and its Fogg Art Museum. An edited version of Hwang's research paper was published in Berkshire Fine Arts.