An Older and Wiser Hamlet Returns to Shakespeare & Company 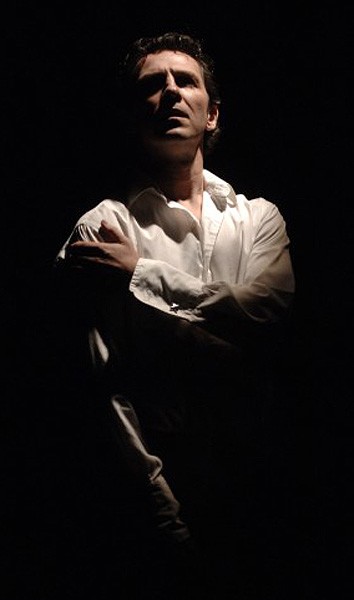 Jason Asprey as Hamlet. Photos of the production by Kevin Sprague 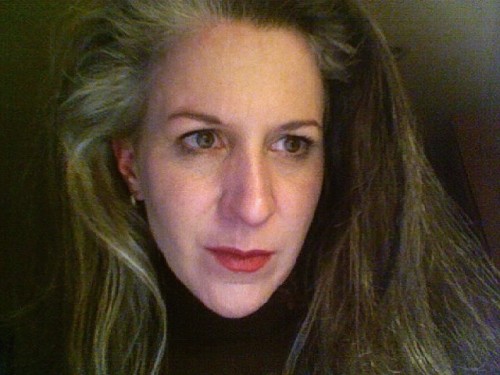 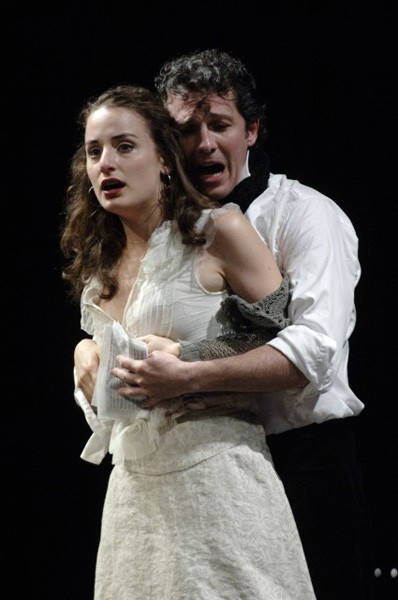 Eizabeth Raetz as Ophelia and Jason Asprey as Hamlet. 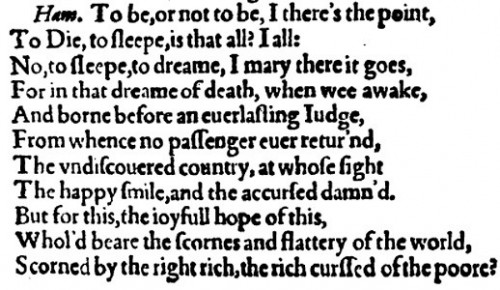 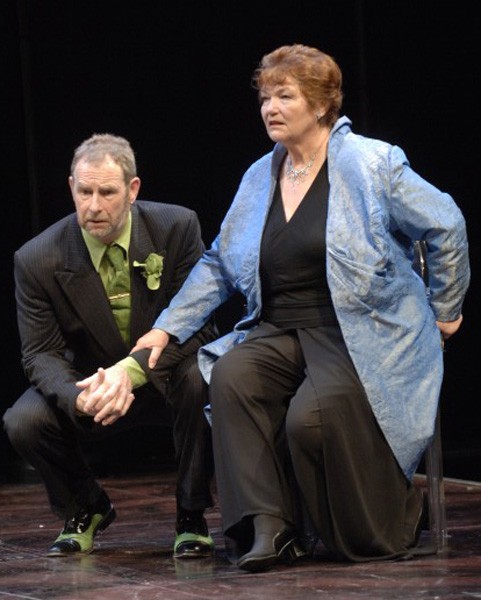 Nigel Gore as Claudius and Tina Packer as Gertrude.

The famous skull in Hamlet.

For many it's the most anticipated event of the Summer. For  others a reunion.  Hamlet returned on June 26 (Our Review is Here) to the Shakespeare & Company's Founders Theatre where it started, and runs until August 28.  Hamlet is considered by many to be Shakespeare's best work. It is the classic tale about the Prince of Denmark and is based on legends embedded in many Western cultures.  And while it is an old story it still has echoes in today's headlines, some four hundred years after it was written.

A full length Hamlet can seem daunting to modern audiences at about four hours running time, but this abridged version of Shakespeare's masterwork is about half that, moves quickly, and won over Berkshire audiences two summers ago. It has been on tour ever since.  It is interesting to note that in Shakespeare's own time, his touring Hamlet was always shorter than that presented at home.  There is no one standard version, and the longer ones have more subplots which are easily dispensed with.

This Hamlet is ably directed by Eleanor Holdridge who is now in her tenth season working with the Lenox company. We caught up with her as she prepared the production for its return to the Berkshires, one that is very tight. Tomorrow she plans a marathon tech session from noon to midnight since it is the only time she can gather all the designers together in one place. The first performance is slated for Friday, with the official press opening on Saturday evening.

Of course, we wanted to know if there have been any significant changes in the two years the show has been on the road. Was this the same show, or had it evolved.

"The design and concept remains the same,' responded Holdridge, "but time changes everything.  In each new iteration we bring more of our life experience to it. Delving into the text, we never fail to find new and better ways to deepen its meaning." During the two years of traveling changes took place. "New cast members arrived last fall, and three more for this incarnation. Inevitably, each time a new actor enters a scene the world of the play shifts a little.  New energy and personalities always bring with it fresh and revealing nuances."

Tina Packer, the company's artistic director continues to appear in this production as does Nigel Gore, who resumes his original role in the play. Says Holdridge:  "Interestingly the relationships shift just slightly as well: Gertrude and Claudius who are played by Packer and Gore are still in the throes of new-found love,  but they have a much more complex relationship." Speaking of relationships, I asked the director about Jason Asprey  who plays Hamlet and is Packer's son in real life. "Both Asprey and Johnny Lee Davenport (Hamlet's Father's Ghost) have found further subtlety in their complicated filial relationship."

Letting us in on her own concept for Hamlet, Holdridge revealed that "there is also the chance, as I go to work on the end of the play today, that the end of the play will shift somewhat.  As Fortinbras, the new guy, filled with purpose, energy and strength comes in to take charge, I suspect that his relationship to the future and Hamlet's story will change. That's based on my own current and more hopeful perspective on the direction of our country's future."

Does this mean that Hamlet is somehow relevant to today, and current events?

"When I first conceived this production of Hamlet, I was responding very much to 9/11 and the death of my own father. I found parallels in the sudden shifting of America's focus and Hamlet's own loss of his father.  In that historic moment, the world suddenly became terrifying, though in looking back it seemed a bit simpler than today.  Now, as we revisit the text and this production, I'm finding that the production and play are absolutely current, vivid, and filled with life."

Could Hamlet and his father echoes the relationship between Bush 41 and Bush 43?  The younger Bush acted as if his father was dead and rarely conferred with him. Holdridge saw it clearly. "After eight years of the same leadership--a leadership with our president's own father's legacy hovering over him--we are suddenly in a brave new world.  We do not know the outcome.  We only know we are in the midst of turmoil.  Hamlet, too was lost in the turmoil of his family's making, and discovers that the only thing he can rely on, in the end, is his own conscience saying, "the readiness is all."  I think that's where we are as a country just now.  At the end of something known, making ourselves ready for the unknown, for whatever comes next." And conscience has been a large part of that discussion.

That's a lot to get out of a four century old play. As Shakespeare & Company's press release details, the original run of Hamlet in 2006 was met by packed houses and overwhelming critical acclaim, noted for its vigorous approach and electric crackle. A tour last September and October brought this fast-moving, visually stunning production to new audiences around the country. So the original creative team returns to present one more opportunity to catch this unmissable production.

The actors include a provocatively cast trio of family members and Company mainstays, who performed onstage in this production together for the first time. Longtime Company member Jason Asprey plays Hamlet; his mother and the Company's Founding Artistic Director, Tina Packer, is Hamlet's mother Queen Gertrude; and her husband (and Asprey's stepfather), fellow Company Founder and Director of Training, Dennis Krausnick, is royal adviser Polonius. Nigel GoreÂ—who in 2007 delighted audiences as Antony in Antony and Cleopatra and Bottom in A Midsummer Night's Dream, and as the self-styled troubadour clown Lavache in last summer's All's Well That Ends WellÂ—returns as the king Claudius, the role that first brought him to Shakespeare & Company.

Hamlet is considered by many to be Shakespeare's masterpiece, and thus arguably the greatest English-language drama ever written.  He probably wrote Hamlet in 1600, shortly after the death of his only son, Hamnet.  The story follows the struggles of the young Prince of Denmark, who is racked with grief over the recent death of his father. Feeling betrayed by his mother, Queen GertrudeÂ—who shortly after his father's death married his uncle ClaudiusÂ—Hamlet is thrown into a famously indecisive turmoil as he wrestles with the question of whether to kill Claudius, whom he believes killed his father.  An ill-fated love affair with Ophelia and the ill-conceived murder of her father lead to a climactic duel at court with mortal consequences for all involved.

Holdridge says she was drawn to this play because of the way the title character plumbs, in quite dramatic fashion, the essential questions facing the thinking being. "What draws me to the play is Hamlet's relentless and very active pursuit of self-knowledge and his rigorous exploration of what it is to be human.  He is not content to live within the form of his given society or even the form of his own play," she added.

Holdridge is convinced that "Although Hamlet could be a terrible King, a bad boyfriend, a quixotic friend, a sullen and brooding son, he is also a man who wants to do what is right, to live up to the dictates of his father and his conscience and yet  be true to himself. A very human being," Holdridge concluded.

Founders' Theatre is air-conditioned and wheelchair accessible.  Performances in the evenings run at 7:30 p.m. and in the afternoons at 2:00 p.m. Tickets range from $15 to $60. For a complete listing of productions and schedules, to inquire about details of the 40% Berkshire Resident Discount, youth discounts and Rush Tix, or to receive a brochure, you can either visit their website or call the Box Office at (413) 637-3353. For group visits, contact Group Sales Manager Victoria Vining at (413) 637-1199 ext. 132.

ELEANOR HOLDRIDGE: tenth season (Director of Hamlet) S&Co: Hamlet, A Midsummer Night's Dream, As You Like It, Lettice And Lovage, The Tempest, Twelfth Night, The Taming Of The Shrew. Off-Broadway productions include Steve & Idi by David Grimm at the Rattlestick Playwrights Theatre, Cycling Past The Matterhorn at the Clurman Theatre, The Imaginary Invalid, and Mary Stuart at the Pearl Theatre Company. Regional: The Crucible and Much Ado About Nothing (Perseverance Theatre); The Blond, The Brunette And The Vengeful Redhead, Noises Off and Art (Triad Stage); Julius Caesar and Macbeth (Milwaukee Shakespeare); The Two Gentlemen Of Verona (Alabama Shakespeare Festival); A Midsummer Night's Dream (Shakespeare Festival of St. Louis); Henry V (Shakespeare on the Sound); The Taming Of The Shrew and The Tempest (Philadelphia Shakespeare Festival); Betrayal (Portland Stage Company); The Lion In Winter (Northern Stage); and The Cenci, The Two Noble Kinsmen, Dido and Aeneas (Red Heel Theatre Company). In the past Eleanor has held positions as Artistic Director for the Red Heel Theatre Company, Resident Assistant Director at the Shakespeare Theatre and Resident Director at New Dramatists. She has directed and taught students at the Yale School of Drama, NYU's graduate program and the Juilliard School, among others. She holds an MFA from Yale School of Drama.