Clashing Characters Whip Up a Perfect Storm on Stage 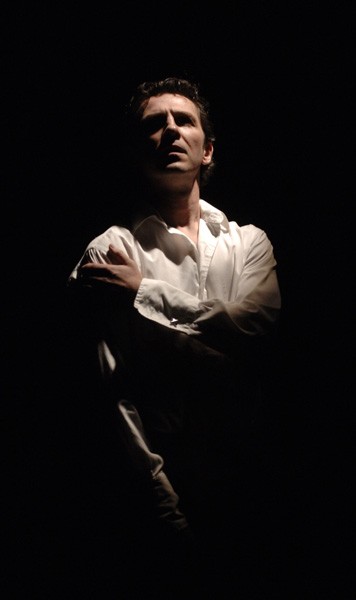 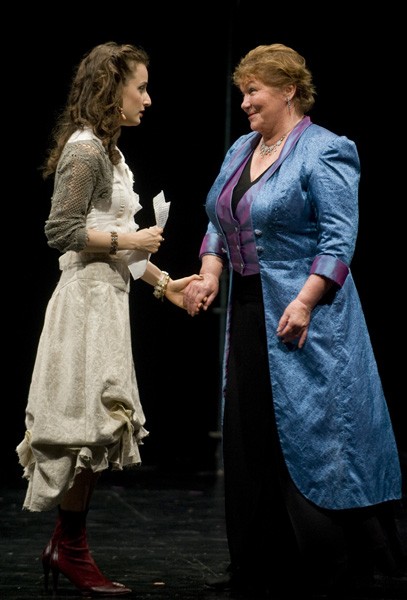 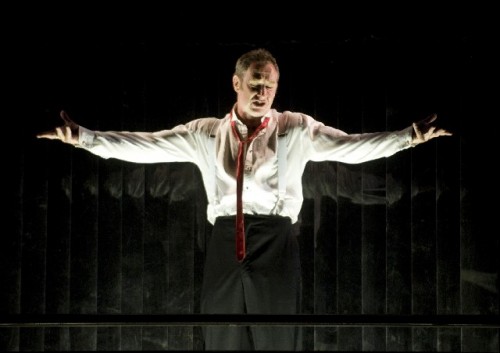 Don’t Cry for me, Denmark. Nigel Gore as Claudius. 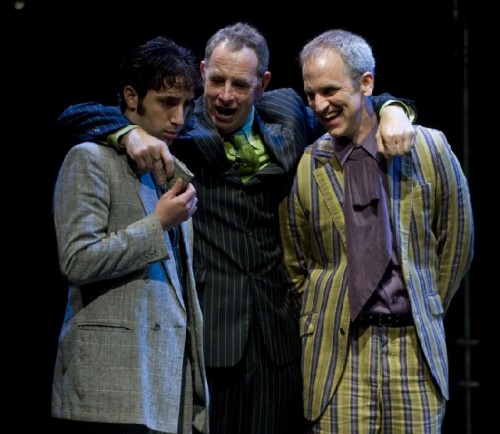 Rosencrantz and Guildenstern conspire with Claudius. 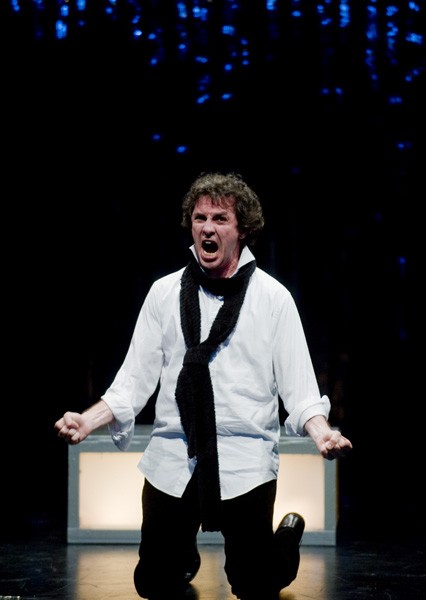 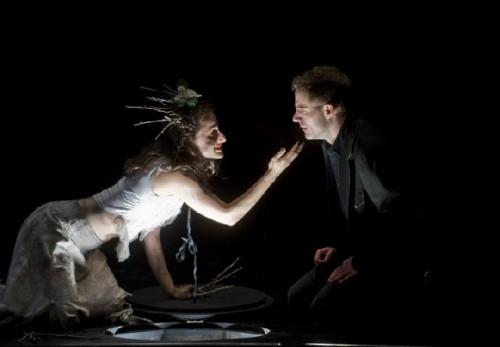 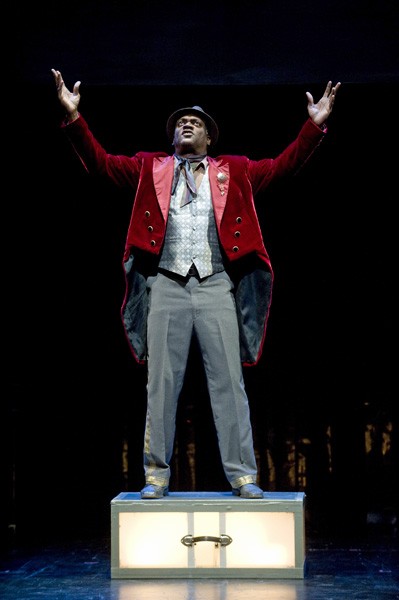 Johnny Lee Davenport was sensational as the Ghost, Player King and Gravedigger. 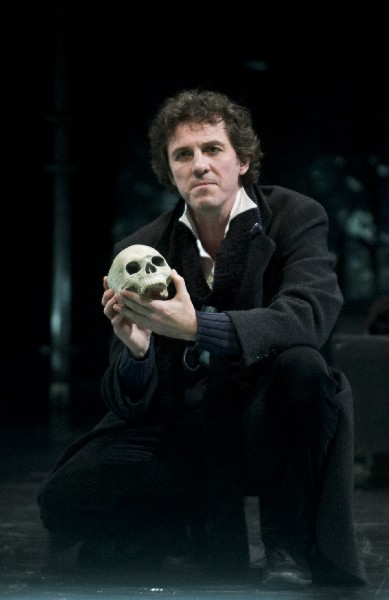 Hamlet with Yorick, a fellow of infinite jest. 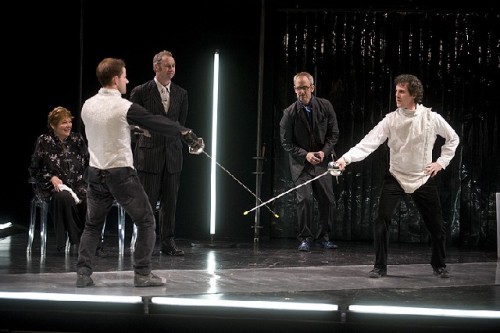 In the end, most will be dead. 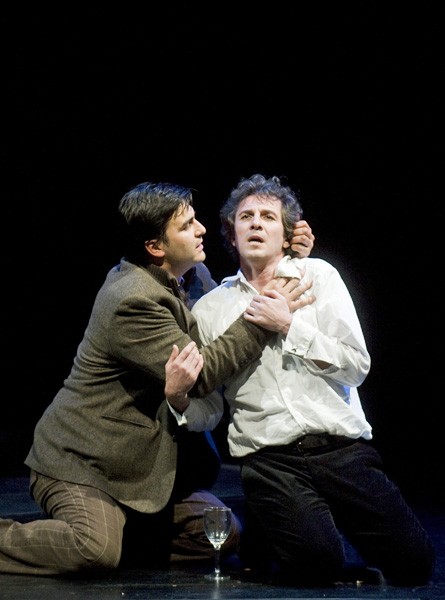 Horatio cradles Hamlet (Jake Waid and Jason Asprey) in his arms as the final scene unfolds.

There will be blood tonight.

Three years ago Shakespeare & Company unveiled their updated take on Hamlet to the Berkshires, and the reaction was electric. Part of that was due to the zapping and flashing special effects that kept the audience alert through a marathon three hour visit with Shakespeare's most complex and controversial characters. Because it was being taken on the road - where it has played all across the US during the past two years - things had to be kept simple. So yes, this is a bare pipes production, but as artistic director Tina Packer promised, this is one thundering good story that needs little decoration as long as the acting is top notch. It is.

The secret of a good Shakespeare show is to make sure that the characters "speak the speech" in ways that are clear and compelling, a Shakespeare & Company trademark. As a result, even theatre-goers who are unfamiliar with Shakespeare are finding this Hamlet a rip-roaring good time. To begin with the play itself has lost 25% of its weight in its transition from the four hour "eternity" version to this three hour "purgatory" one.

For all its snap and crackle, people with ADD or those addicted to multi-tasking might have a problem with the length, though there is a healthy intermission half way through and a glorious snack bar for restorative nourishment. "Brevity may be the soul of wit," but there are times it appears that Shakespeare was not all that self reflective.

Those who stick it out will reap the rewards. To solve the crime, you have put in the time to understand the people and intrigues behind it. Sure, it's still long, and any normal person will walk out of the theatre a little tired and drained despite this shortened Hamlet, but patience has its own rewards, and we the few, the loyal, the survivors are so much more alive, exhilarated and thinking for having made the effort. This is not mindless entertainment, it is real theatre.

It is uncanny how cleverly the director has snipped and rearranged elements of Hamlet for this production. Static scenes have become compex visual moments as the beauty of the words are complemented with visceral lighting and sound effects, This brings Shakespeare, kicking and screaming, into the present day.  "Though this be madness, yet there is method in 't." But the text is never secondary to the theatrical effects, because Shakespeare & Company never loses sight of the fact that "the play's the thing". Renaissance psychology is a thing of beauty. The Bard was a theatrical innovator in his day, and in my mind I see him looking down on the stage in Lenox wondering "Now why didn't I think of that!"

This is a Hamlet who is hysterical at times and noncommittal at thers, suppressing rage at the death of his father while debating the revenge and retribution that must be apportioned to the still living. Many are guilty, but though few are chosen at first, the stage is littered with dead bodies at the end. "When sorrows come, they come not single spies, but in battalions". There is no better play about ambivalence and revenge run riot than this.

The great Dane Hamlet's dogged pursuit of understanding himself and others is about life itself. But it is like two parallel universes. While all those around him make quick decisions and go about living through the moments that present themselves, the Prince  lurks in his own shadowy world, a virtual recluse who lives inside his own mind. Shakespeare finds ways to reveal to the audience the complex motives of Hamlet. He does this over the course of the play by allowing us to stitch together the full tapestry of his thoughts, a view that Hamlet denies the characters on stage, each one only seeing a few details, never the complete picture.

The premise of the show's concept is simple.  It begins as Hamlet is dying, and so the play unfolds in the usual order but as a series of extended flashbacks. Director Holdridge cuts together the  contrasting moments of a dying brain's neurons firing their last with the brilliant classic scenes of the play as Shakespeare wrote it. The actors are in modern dress which consists of neutral, everyday suits and serviceable dresses. Reducing the focus on costumes removes the last remaining camouflage from the people who wear them. Because they are simply dressed, the characters on stage are revealed just as they are, naked for all to see.

Yeah, yeah, but how good were the "To be, or not to be: that is the question" and the other famous speeches you may wonder. Well, for one thing, they weren't put on velvet verbal pillows to signal their importance.

Refreshing in his readings. Jason Asprey did not treat them like precious pearls to be the glittering centerpieces of this production.  Nor did others. That's because the director didn't see it that way. In her fresh look at Shakespeare, director Holdridge brought them back to what they are: simple words that are spoken  by the characters to keep the plot moving. So Asprey and the other actors spoke them clearly but conversationally as they might be in real life. No pretentious pauses (well maybe one or two) or basso profundo intonations. You might even say they were often casually tossed off, and sometimes you had to be paying attention to hear them flying by. This wasn't a Shakespearean high mass. It was a dramatic story unfolding.

Asprey is a very gifted actor, not surprising given his pedigree. He is the son of Tina Packer who plays Gertrude while Dennis Krausnick who plays Polonius is his step-father.  The relationships are doubly interesting because of this, and it is no wonder that Asprey brings a remarkable freshness of interpretation to this most cherished of theatrical roles. There is a vitality to his performance, especially during the final swordplay scene, that makes watching his death even more painful. Fight choreographer Kevin G. Coleman deserves much credit, no doubt, but Asprey and Stephen James Anderson are the ones who gave it real zing.

As Gertrude, Tina Packer broke my heart. As his mother, her love for Hamlet  and her divided loyalties weighed on her. She played the role with her usual gusto, though to these eyes, there was the slightest stoop in evidence, and a tempering of her voice, but the old girl's got guts. Damn the years, full speed ahead!  For those of us who have seen and known her over the many decades she has been leading this company, her stage appearances continue to be very special and important events. Shakespearean actresses progress from Juliet to Gertrude, but what follows that? 400 years ago people almost never survived to the age of Tina. Or me. Or you.

Claudius (Nigel Gore) and Polonius (Dennis Krausnick) were perfectly cast, as was the masterful Johnny Lee Davenport in the multiple roles of the Ghost, Player King and Gravedigger. Also delivering strong performances were Alexander Sovraonsky and Andrew Borthwick-Leslie as Ronsencrantz and Guildenstern. The role that was a real puzzle to me was Hamlet's supposed friend and protector, Horatio (Jake Waid). He went through the motions as Hamlet's closest ally, but there seemed to be a lack of real feeling behind his words and movements. This may not have been poor acting, but rather the most brilliant reading of the night. So many of us say the right things, but somethimes don't really mean them.  So maybe his interpretation was one of the new nuances director Holdridge was alluding to in her recent interview with BFA.

The biggest delight of the evening was Ophelia, affectingly played by Elizabeth Raetz who found exactly the right notes to hit in her later mad scenes brought on by Hamlet's rejection of her. This was the one place where the costumes, totally neutral in most other scenes, became quite memorable thanks to Jessica Ford's ragged but lovely naturalistic sheath of a dress.

Most people would look at the simple staging for this Hamlet and wonder why a set designer (Ed Check) would deserve a credit in the program. In fact it is clear the Check along with lighting designer Les Dickert and composer/set designer Scott Killian gave this production a lot of thought to bring it to life. The choice of materials and the way they reflected light illuminated the proceedings on stage. The two central doorways looked like industrial freezer entries - and perhaps they were, purchased off the shelf at some industrial supply house to save money. But with gels, special spots and other theatrical magic they became hiding places, an inferno and so much more. The chairs used to suggest thrones were plastic banquet and function items, but because of their shape acted as lenses to concentrate the light and provide the sparkle of jewels. Amazing.

Shakespeare & Company has taken Hamlet and breathed new life into it though a combination of great acting, innovative staging and a shortened script while losing none of the famous speeches nor the dramatic intensity. In their hands it is no longer a costume drama to torture high school students with, but a revealing journey into two of the most complex minds in history, that of the great Hamlet, and the writer who created him.