Glynis Bell in Underneath the Lintel 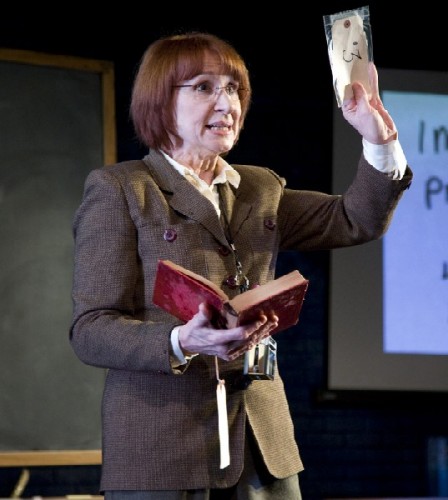 Holding the lost book which has been returned after the lapse of a hundred years. Barrington Stage photos. 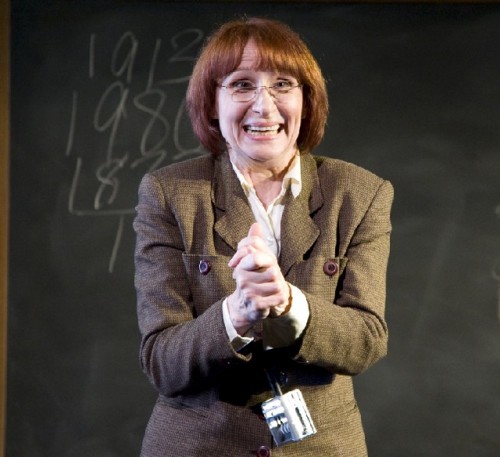 On the trail of the mysterious A. 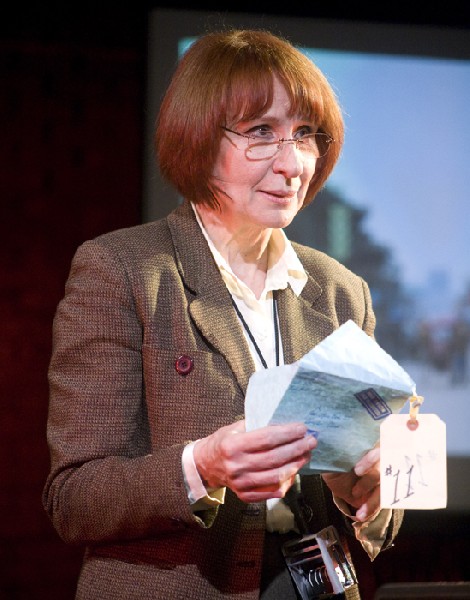 Reading and translating an old letter written in German.

With a tough economy and the June Monsoon there have been concerns about a negative impact on the arts during High Season in the Berkshires. Because of the reliance on cultural tourism there is a narrow window of eight weeks to earn the income that sustains companies through the year.

For Julianne Boyd the strategy has been to front load the season with musicals that appeal to the audience. Last year Barrington Stage Company opened with a home grown production of   "25th Annual Putnam County Spelling Bee" and the year before with an anniversary production of "West Side Story." Both those shows were hits. Coming into a tough year Boyd mounted that ultimate chestnut, arguably the greatest of all American musicals, "Carousel." Although the production cut corners, with two pianos instead of the usual pit band, the show played to rave reviews, other than a couple of nitpickers. The show ran at 85% capacity including a sold out final curtain and pervasive standing ovations.

While Boyd was clearly banking on a boffo hit on the main stage everyone was surprised by the enormous success of "Freud's Last Session" which resulted in many sold out shows. The two man drama presented Sigmund Freud in London, shortly before his suicide, and a fictive meeting with C.S. Lewis. The discussion of God, Lewis yes and Freud no, resonated with audiences.

With a new one woman, one act play "Underneath the Lintel Tree," by Glen Berger, starring Glynis Bell, which opened last night in Pittsfield, the company is hoping that "Three's a Charm." Building on the success of the first two productions allowed for the wiggle room of producing a renowned but challenging play that ran for 450 performances Off Broadway in 2001. A surreal pursuit of the mythical "Wandering Jew" who left behind the mantra of "I Was Here" through time and space connected with audiences. In the months post 9/11 that poignant message had a palpable emotional impact.

In this tour de force performance Glynis Bell was riveting as the librarian on a personal vision quest. She is intent on tracking down the mysterious A. who turned in a book some 100 plus years overdue. Librarians in general can be a bit obsessive compulsive but here the character known only as The Librarian is completely and marvelously over the top.

If you closed your eyes this one woman show seemed like it belonged to the three plays of the Diva Series at Shakespeare & Company. Two of those shows dealt with Judaism and the Holocaust. That theme also insinuated itself into "Underneath the Lintel" as the mystery of the lost book slowly evolved.

From the moment that The Librarian arrives, lurching on stage, she sustains the performance with flat out energy and manic charisma. Other actors have performed the role but here Bell inhabits and owns the character. It is impossible to imagine any other interpretation.

Truth is she's a bit hard to take. Librarians. Aren't they all just a touch prissy, old maidish (even if they are married with a dozen kids), and more than a little up tight. They seem to know everything about books except what's inside them. The book is an object to be properly shelved and catalogued, indexed, and tracked.

This poor woman, more to be pitied than censured, has gone quite bonkers in tracking down who borrowed that book more than five generations ago. After such an epic librarian's no no and affront, said borrower, or descendant thereof, had the nerve to drop the book though a slot in the door into the overnight bin. In one of the best lines of the night she observes that, under the circumstances, said offender should have taken the book to the front desk. There to be assessed the fine, compounded daily and yearly, that would be staggering beyond measure.

At the beginning of the play The Librarian arrived on stage dragging a heavy suitcase which she clunked onto a desk. It contains the Evidence she has compiled to solve the mystery of the identity of the borrower. She seeks, and is denied, permission from superiors (with a reprimand) for permission and funds to track down clues that lead to London. Taking vacation time, which she looses  track of, The Librarian follows the trail. A few more days of "sick leave" stretch into weeks, months and years. It is never explained how she is able to fund and sustain this travel on her modest salary.

The endless pursuit entails losing every fragment of her job, security, and sanity. There are echoes of Kafkaesque madness and obsession. The action becomes a travel adventure into the Heart of Darkness, with its search for purpose and meaning.

In the sparing, cluttered, junky set by Brian Prather there are some convenient devices to help us through this terra incognita. There are the marked, bagged and numbered "Clues" and evidence that keeps popping up. On a blackboard she scrawls key dates with a commentary on their significance. There is a slide projector that shows us images of points to which A. has been tracked around the world.

A key object is a device which hangs from a lanyard around her neck. It is used to stamp the date of check out or return of books. Because it may be infinitely adjusted it contains all dates and  historic time. It is a roulette wheel and signifier of loss and memory.

As she slips into obsession with finding the lost A. we learn fragments of her spinster life. There was indeed a man. Only one. There is much agony over that. And a petty rivalry with an annoying and unsympathetic colleague. We are not sure that we like this woman and her fixation.

Until it evolved that she is indeed on the trail of the mythical "Wandering Jew." As Astrid noted the original legend concerns a Jew who taunted Jesus on the way to the Crucifixion and was then cursed to walk the earth until the Second Coming. The exact nature of the wanderer's indiscretion varies in different versions of the tale, as do aspects of his character; sometimes he is said to be a shoemaker or other tradesman, sometimes he is the doorman at Pontius Pilate's estate.

To illustrate the point The Librarian projects a painting of the subject, conveyed the significance of a red herring, and showed a photograph of the Wandering Jew as a plant specimen. By now the evidence is tumbling out of the suitcase including a filthy pair of worker's pant tracked to a laundry ticket in London. Or a jacket with a Star of David from Auschwitz. Everywhere A. scrawls "I Was Here."

The play ends more than it is really resolved. In an awkward final scene she bolts out through the audience. Then returned to warm applause.  A lot of us left the theatre thinking about those books we never returned. A la recherche du temps perdu, Like Proust perhaps there are days when it is best not to get out of bed. The horror. Or, like Gregor, during the night we have morphed into a bug. But pity the fate of the Librarian. There but for the grace. Well, not really.