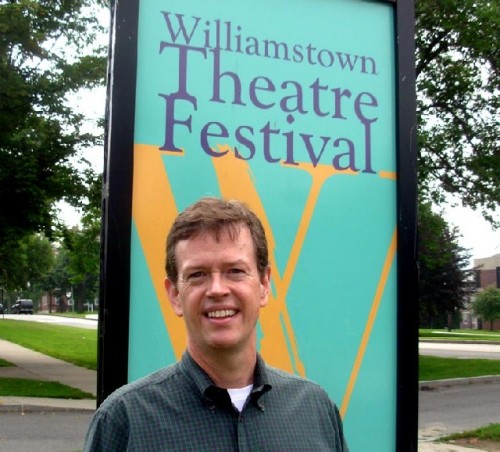 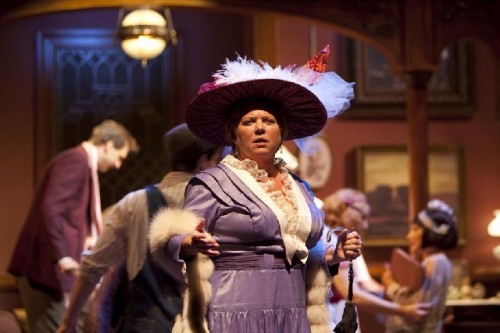 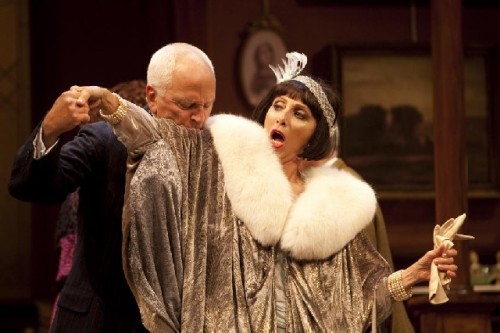 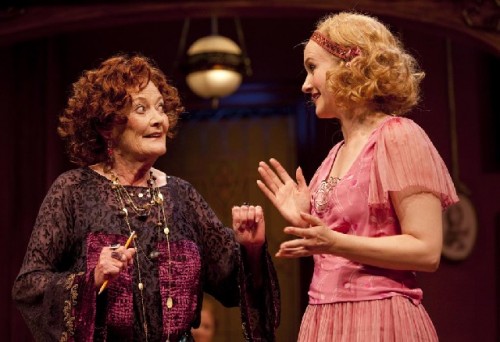 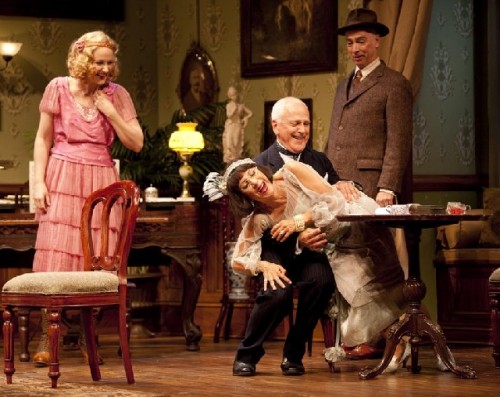 In the Ritter’s living room. 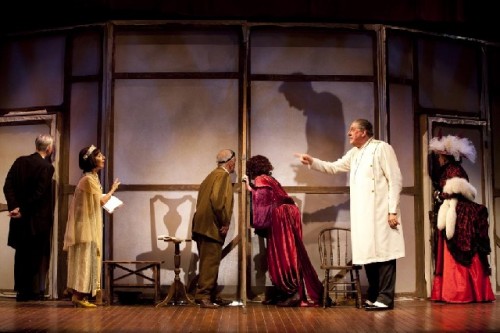 Back stage at the Hoochie Koochie. 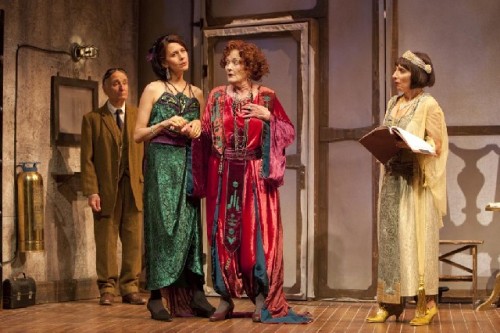 Mrs. Pampinelli encourages the greiving Mrs. Clara Sheppard (Jessica Hecht) to take a bow for the performance she did not give. 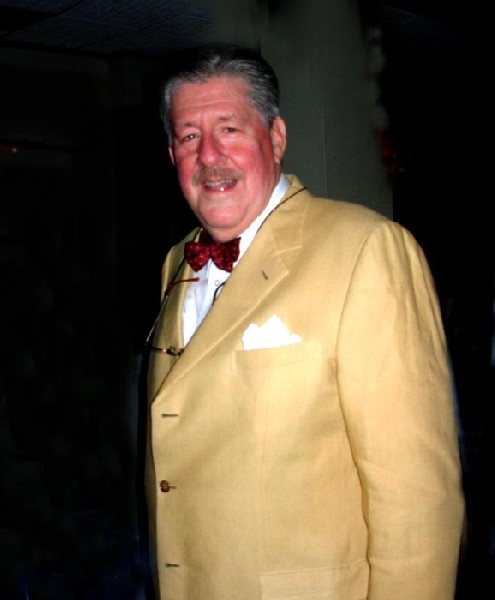 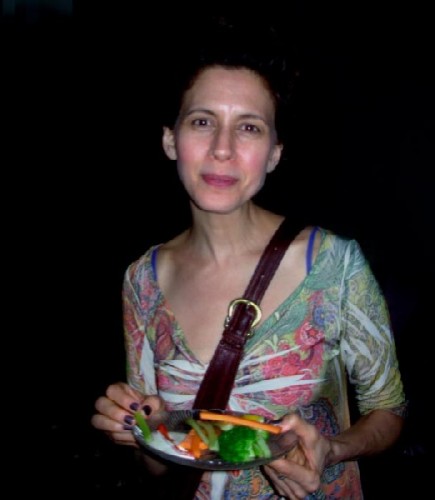 WTF regular Jessica Hecht made the most of a small role. (Giuliano) 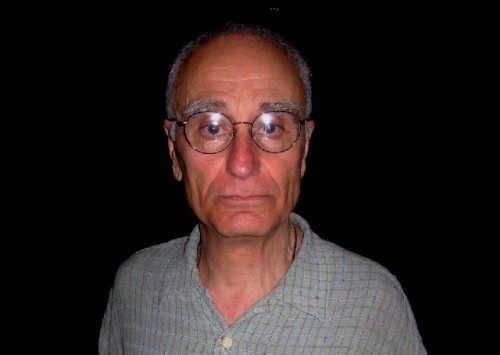 The character actor Yusef Bulos has performed at WTF since the 1980s. (Giuliano)

During this bitchin awful summer, the Monsoon of 2009, Lord knows we need a laugh. After 40 days and 40 nights of rain it's time to stop going to the theatre and start building an Arc in the back yard. But  Dylan Baker and a wonderful cast  have worked their asses off to lighten up the end of the tunnel as we slip and slide, ooze, into the Guns of August.

With a bit of theatrical archeology Baker has resurrected and adapted the 1922 comedy by George Kelly (uncle by the way of Princess Grace) "The Torch-Bearers" at the Williamstown Theatre Festival through August 9. It's a sure cure for the summertime blues. What a hoot.

In general comedy is more difficult and less respected than drama. That notion starts with Aristotle in "The Poetics." While it is always possible to upgrade and recontextualize tragedy it is far more difficult to reshape a comedy. The challenge of this play is that what proved to be hilarious to an audience in an era of bootleg liquor and flappers doing the Charleston and Black Bottom may not be that funny to an audience in 2009. While Kelly was a popular playwright in the 1920s, and won a Pulitzer Prize, in 1926, for the drama "Craig's Wife," overall he hasn't proved to be durable. This is an ambitious, plucky and mostly successful revival production of an American playwright who has slipped off the radar screen.

The premise of this comedy focuses on amateurs who aspire to be thespians with farcical results. There is the period issue of a respectable housewife Mrs. Paula Ritter (Becky Ann Baker) who is an embarrassment to her husband Mr. Frederick Ritter (John Rubenstein). She hints at evolving as the liberated woman of later generations. This was a time when women had just earned the vote. They were smoking cigarettes, bobbing their hair, and drinking cocktails. As the wonderful and flamboyant costumes of  Ilona Somogyi reveal they also got rid of confining corsets. Mr. Ritter (John Rubenstein) conveys the oppression of men over their wives. A woman's place was in the home. And not making a spectacle of herself at the Hoochie Koochie (Horticulture Hall) under the direction of the over the top Mrs. J. Duro Pampinelli (Katherine McGrath).

The women's lib aspect is mostly a stumbling block in this play. While it would have proved shocking and hilarious to an audience in 1920 that's hardly the case today. What keeps this play alive for a contemporary audience is its farcical send up of out of whack amateur theatre. Particularly, when under a Mrs. Pampinelli (every community theatre group has one) they strive, absurdly, to professional standards. She encourages her flock of aspirants in the delusion that they have genuine talent. In a giddy moment Mrs. Ritter considers moving to New York for a life on the stage. For which Mrs. Pampinelli is willing to write glowing letters of recommendation. Mr. Ritter turns this into a hoax. Surely the men in the audience found that funny in 1922 but today he is just a bastard who abuses the dreams and ambitions of his wife.

Given the superannuated mature of the material Baker and a wonderful cast have squeezed the juice out of this lemon. Once again WTF has delivered with superb production values. Starting with a meticulous set ny David Korins conveying the bourgeois living room of the Ritters with period furniture and kitsch. This cleverly breaks down into the back stage of the Hoochie Koochie and then with another quick change, mid second  act, back into the Ritter's home for the aftermath of a disastrous evening of ersatz theatre. The costumes of  Somogyyi and the lighting of Rui Rita brilliantly enhance the comedy.

All of the performances were simply marvelous. The direction of Baker has given them ample opportunity to work out their own shtick. There is a lot of physical comedy and hilarious sight gags. Philip Goodwin (Mr. Ralph Twiller) in a minor role just had to walk across the stage and drop his cane to have the audience in stitches. The veteran actor Yusef Bulos was masterful in messing up all the cues. What a little gem of a performance.

One of the greatest pleasures of WTF is how it functions season after season as a repertory company. There is the delight of seeing how a company of key actors adapt to different roles. In this production two very talented young actors Katie Finneran  (Miss Florence McCrickett) and James Waterson (Teddy Spearing) appeared earlier in the season in "Children." Here they played roles that were  terribly different. It helped to convey their talent and versatility.

Edward Hermann (Mr. Huxley Hossefroose) earned applause just for walking on stage. This is his 12th WTF season and the audience greeted him warmly. Again he turned in an outrageous performance overacting with the grand gestures of a self absorbed amateur. It seemed that his character had seen too many John Barrymore silent films. Bear in mind that pantomime was the manner of the day as sound would not come to the "talkies" until Al Jolson's "The Jazz Singer" for Warner Brothers in 1927.

Reading the program we waited until the second act for the appearance of a WTF perennial Jessica Hecht as Mrs. Clara Sheppard. She dropped out of  Mrs.Pampinelli's play because her husband had the bad manners to croak at the last minute. But even in mourning she can't resist showing up back stage and is enduced into taking a bow for the performance she dropped out of. Hecht was wonderful as usual in a role that was just too minor to show the full range of her ability. John Rubenstein was suitably chauvinistic as Mr. Ritter.

Yet again the hilarious Andrea Martin as the outrageous and ditsy Mrs. Nelly Fell not just steals every scene but threatens to run away with the show. Earlier this year I witnessed a similar feat making the very most of a rather small role as the maid in the Broadway hit "Exit the King." Martin deservedly was nominated for Drama Desk and Outer Critics Circle nominations for that role. Here she is the "prompter" who always looses her place at crucial times when the actors know "most of their lines." Her flapper outfit with a huge draped cape and a collar of some enormous, white, dead animal was just terrific. Martin is a really funny lady now in her fifth WTF season. Let's hope to see her in a starring role.

The roles of Mrs. Ritter (Becky Ann Baker) and Mrs. Pampinelli (Katherine McGrath) were problematic. Since the play revolves around them it derails much of the momentum of the play. As a grande dame of the theatre Mrs. Pampinelli is meant to evoke the broad gestures of a Sarah Bernhardt. But McGrath is more staged and tentative than over the top theatrical. Marian Seldes, who starred in the role in Baker's earlier, Off Broadway production was originally scheduled but dropped out. Those proved to be tough shoes to fill. Also Becky Ann Baker seems to bring too much naturalism and gravitas to a comic part. She is just fine during the pratfalls of the messed up play within a play. But she fails to provide the right nuance as a vulnerable wife smitten with the bug for show biz.

While this game and plucky production knocks the rust off of a forgotten master it seems mostly to be a labor of love for Dylan Baker. Don't hold your breath for the next revival of a George Kelly play. While a pleasant and amusing evening of theatre it didn't leave me hungry for more.