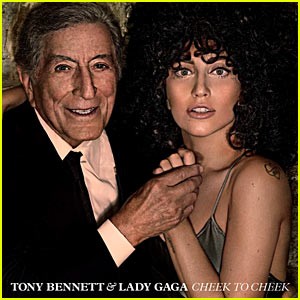 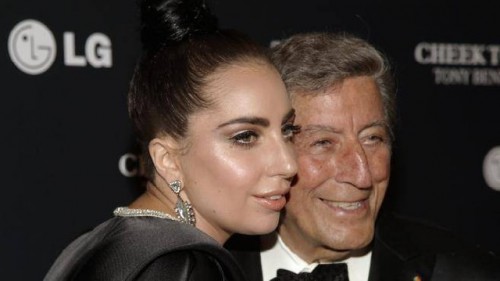 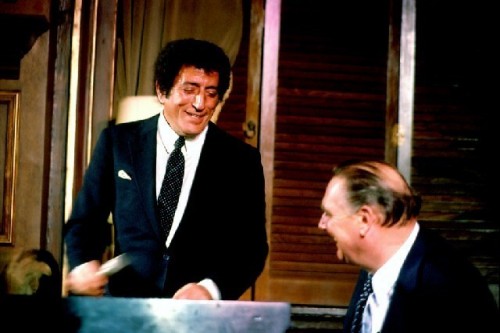 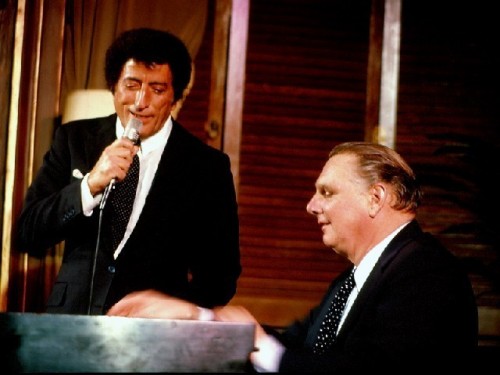 At the Copley Plaza Hotel for a WGBH broadcast. 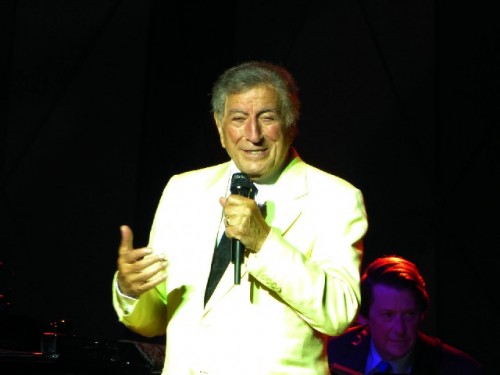 It don’t mean a thing if it ain’t got that swing. 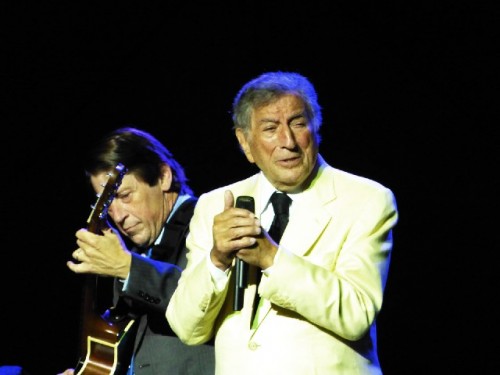 Nice backing from Gray Sargent on the CD. 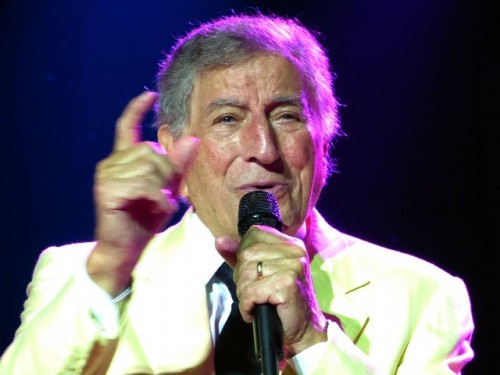 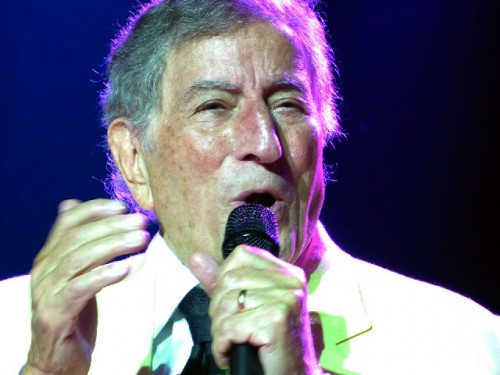 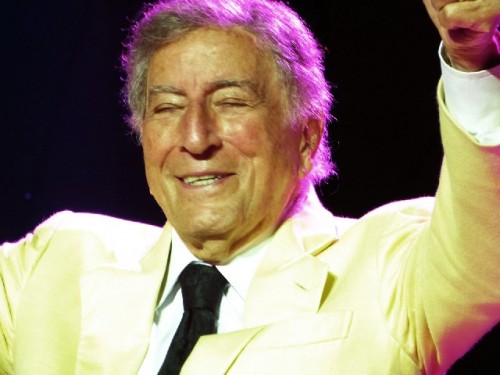 Thanks for the memories. 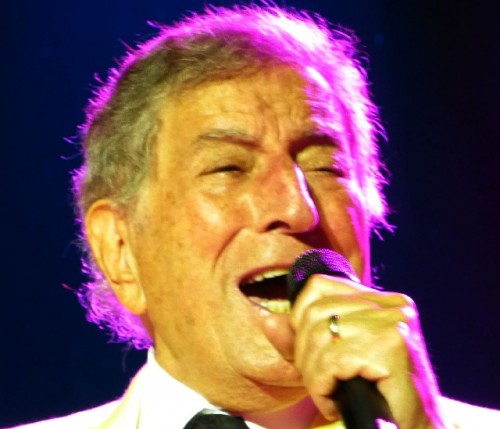 Belting out a swing tune.

During his season ending appearance at Tanglewood the greatest living jazz singer, now 88, Tony Bennett, plugged his soon to be released CD with the sensational pop star, Lady Gaga, an aesthetic granddaughter at a mere 28. That’s a point spread of 60 years. What could they possibly have in common?

This week marked the release of Tony Bennett & Lady Gaga Cheek to Cheek. This project has been in production over the past couple of years since they first appeared together at a benefit. That led to an invitation to participate on one of Tony’s two, enormously successful, Grammy winning Duets CD’s.

We have enjoyed Lady Gaga in the past but mostly as a freak show with a voice.

Lord have mercy what a wild child.

Here however, based on the cover shot and singing, we get to see what she really looks and sounds like.

This is an ambitious step up for her to be paired with such a renowned master in a genre where she is at best a rookie.

Even though, with this release, critics may be touting her as rookie of the year.

Given her celebrity status most critics are damning this release with knee jerk, faint praise.

Really folks. This is hardly the second coming of Marvin Gaye and Tami Terrell or Otis Redding and Carla Thomas. Not even, for cripes sake, Satchmo and Ella.

For both artists it’s a bold and intriguing, risky move with lots of upside.

They bring unique audiences to each other’s fan base. For Gaga’s following it’s a chance for twenty somethings to be introduced to jazz standards. Tony has an opportunity to reach a wider and younger audience for his enduring music.

There are so many different approaches to the 15 tracks of the deluxe version of this CD that it is little wonder that it took a couple of years to put together. Many moods and styles are touched on and not all with the same success. There is lots of risk taking.

They sound best kicking it at an uptempo swing pace with a Basie cloning big band backing. The CD opens strongly with back to back swing arrangements on Anything Goes and Cheek to Cheek. Tony is at his mellow best in a comfortable groove with that signature articulation and phrasing. Gaga races to catch up and seems stretched and brittle in the upper register singing over him. We sense that she has to push to force a sweet but not particularly powerful or resonant voice. Only now and then does she hit her range in this all over the map CD.

For one under thirty, with fast tracked life experiences that may add up to numerous dog eat dog years, she has a grasp of jazz style. Right now she has bright, pretty pipes but in general the great jazz singers mellow through years of adversity. Billie was most compelling when her voice was a ravaged shard of her youthful swing style. Anita O’Day was awesome with Gene Krupa but matured as an artist in later years working the lounge circuit.

The great jazz singers make you feel the lyrics which is asking a lot for a twenty something. Young rock stars just blast it out at you. Gaga has covered that and now is striving to become a serious artist.

That’s why I snickered hearing her solo take on the demanding standard Lush Life. Here she is revealed as a kid playing grown up. To get what I mean check out the Johnny Hartman version with John Coltrane. It will break your heart.

Just when I start to dig the tracks they start messing with ballads by cluttering them with strings. That just sucks big time. I would rather hear a sax solo in the tradition of Gerry Mulligan backing Annie Ross, Johnny Hodges showcasing Ivie Anderson, or those rare times when Billie and Prez recorded together. Just about everyone sounded best with Basie including Bing Crosby, Sammy Davis, Jr. and Arthur Prysock.

Mostly you sense that Gaga and Tony respect each other and enjoyed these sessions. It comes through. Even though they stumble through Nature Boy and throw aways like the pathetic Goody Goody and the so so Firefly.

Often what’s best are great licks from first class sidemen. The late Paul Horn is heard on Nature Boy. We enjoyed a taste of Gray Sargent on guitar. The music carried best with either those kick ass big band arrangements or combos and piano.

While Tony is slated for the Jazz Hall of Fame for the still young and edgy Gaga this a key move for her career. Late night talk show appearances in far out outfits have started to get old.

Been there done that.

Right now Gaga is at best a B list jazz singer. When, like Tony, there is a little rust on her pipes she can sing those old saloon songs with more conviction.

Until then this is a great beginning and at least for now fresh and fun while driving around. Which is where I mostly listen to music. This week, for example, I have been digging Lee Wiley, Dakota Stanton and Chris Conner. That’s about where I would put Gaga right now. Good but not great.

Sweet pretty voice. A bit thin. Heavy on vibrato and not yet a lot of soul. Not a hint of scat or real chops. Now and then a weird accent and strange articulation. Is that the Bronx?

But lots of upside and as Tony would put it “The Best is Yet to Come.”