Annual Event is a Huge Success 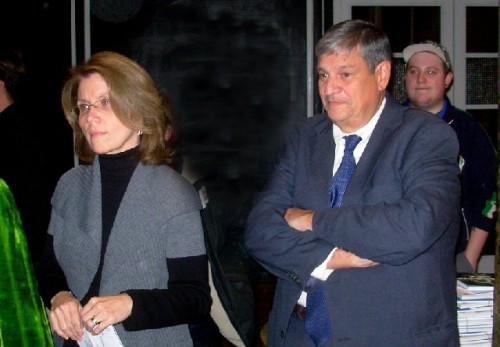 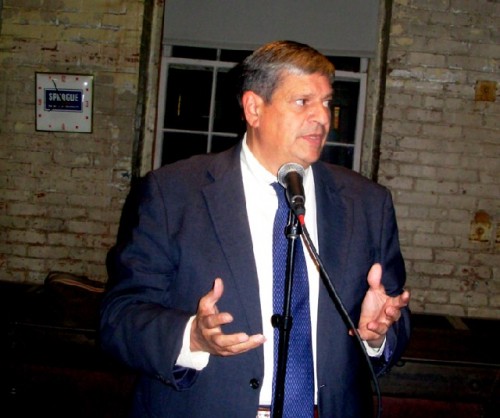 Mayor Barrett expressed his appreciation for the community of artists. 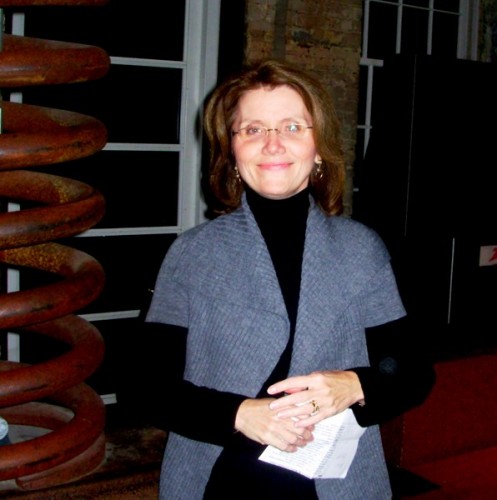 Under Mary Grant MCLA has played a key role in local arts development. 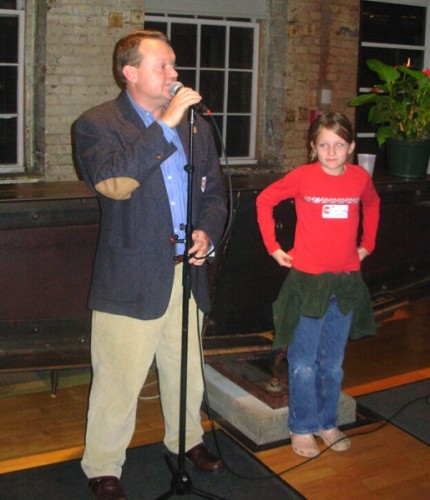 While his daughter listened attentively Jonathan Secor addressed the artists. 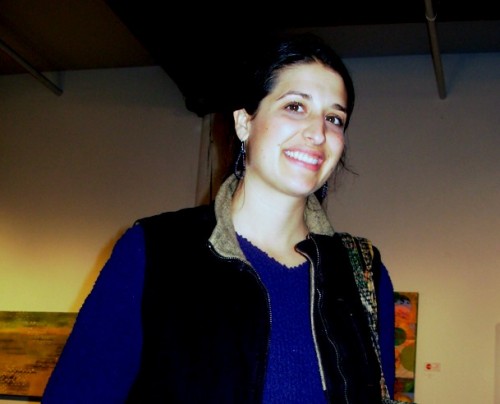 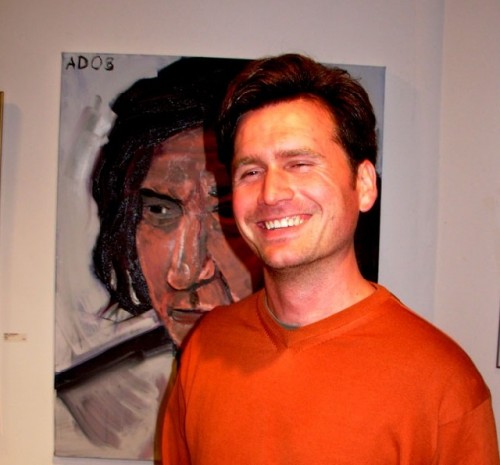 Andrew Davis has proved to be the MVP of North Adams arts activists. 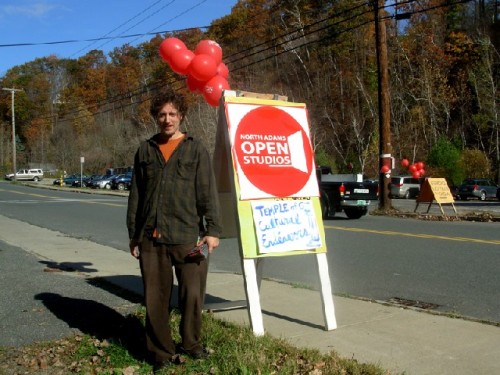 Out and about with Open Studios co-chair, Jason Morin. 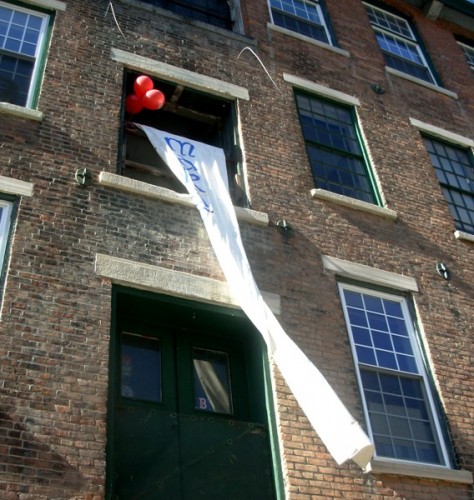 Outside the Beaver Mill. 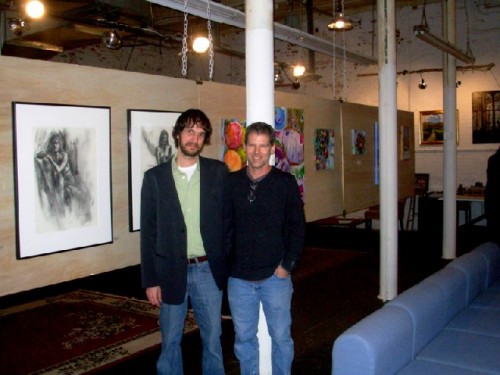 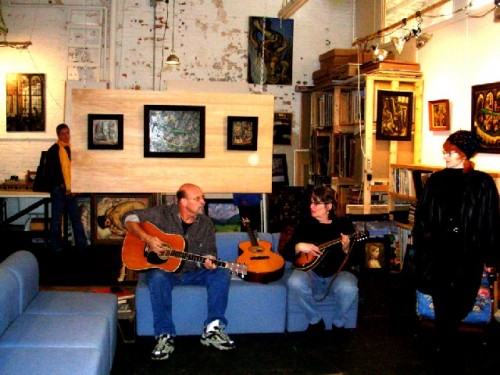 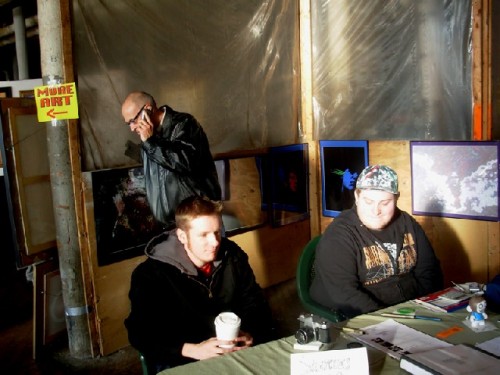 Andrew Klass and his artist pal Charlie Rohrer, who flew in from Chicago, tend their booth. 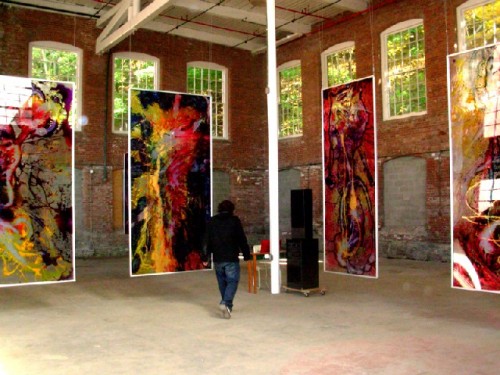 An installation of work by Jean Noel Chazelle at the Delftreet Mill. 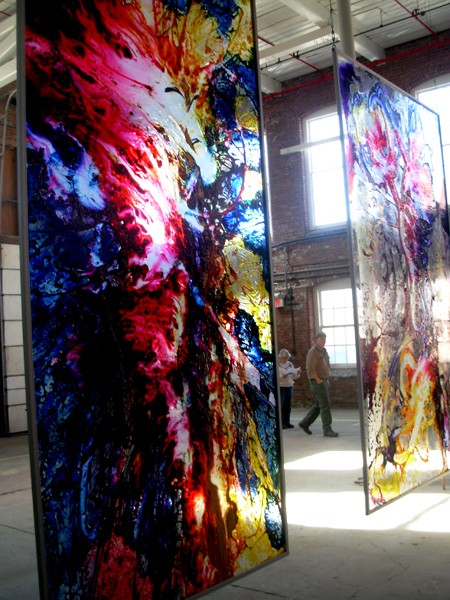 Paintings by Chazelle catch the light. 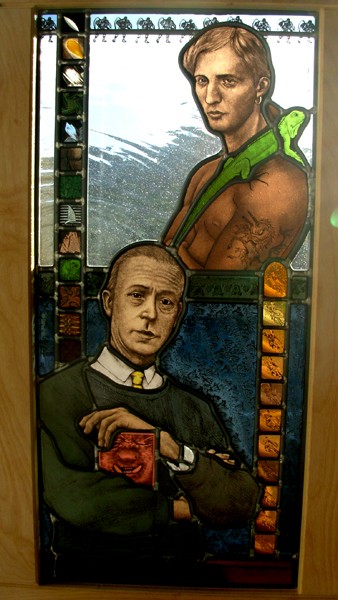 A stained glass piece by Debora Coombs at the North Adams Coop Gallery. 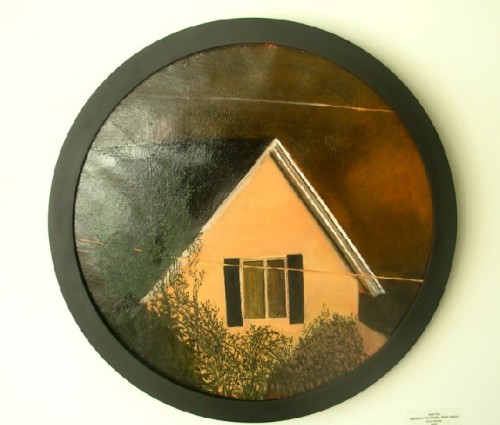 A tondo by Jaye Fox at the Coop on Main Street. 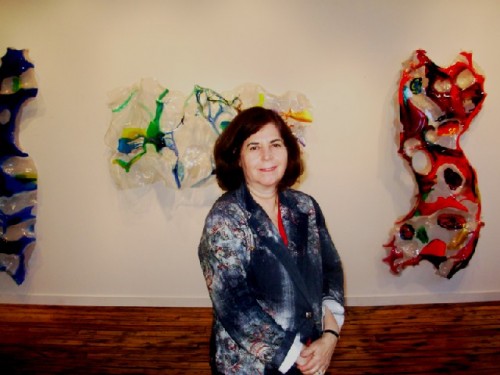 Majorie Minkin in her Eclipse studio. 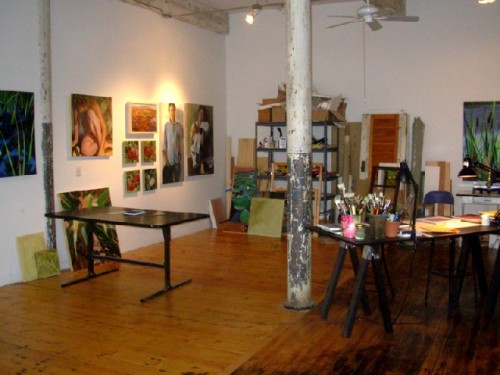 A corner of the Eclipse studio of Susan Graber. 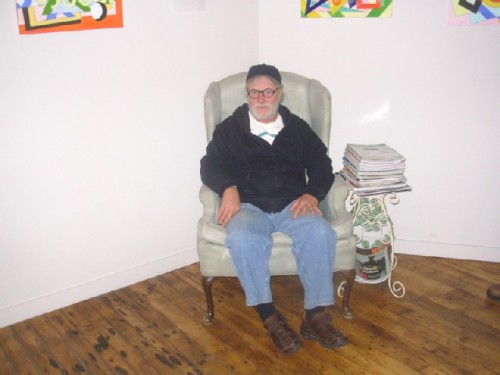 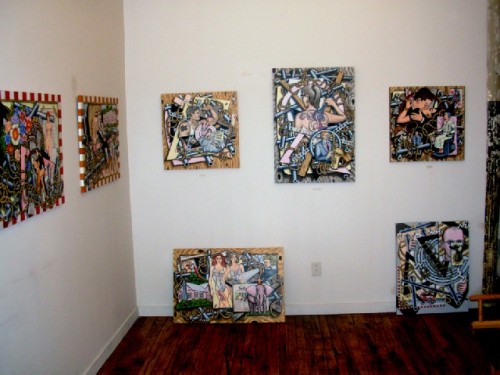 A display of recent paintings by Norman Thomas.

Over each of the past four years the annual North Adams Open Studios has gotten bigger and better. An enormous amount of time and energy goes into the organization to coordinate the many details and venues.Link to 2007 Open Studios

This weekend, Friday, October 17 through Sunday, October 19, there were hundreds of visitors touring the city looking at artists in their natural habitat. In addition to the numerous studios open for the popular event, there were also the galleries comprising the temporary project Downstreet, MCLA's Gallery 51, Kolok Gallery and the Eclipse Mill Gallery.

Where, last year, a number of artists showed in vacant commercial spaces along Main Street that was altered as most of those spaces were taken by the Downstreet project including the spacious North Adams Cooperative Gallery. A significant change was the reconfiguration of the Delftree industrial complex, the former Mushroom Factory, across the street from the Eclipse Mill. It has evolved into the North Adams Museum of Art (NOAMA). There were many artists showing their work in makeshift booths. At the Beaver Mill, just around the bend, there was also a temporary gallery in what was formerly the Contemporary Artists Center (CAC).

There were other venues and studios spread out all over the city. Like a great treasure hunt families were out and about with maps produced for the occasion. While there was enormous energy and enthusiasm, at the end of the day, artists were reporting that sales were moderate.

The Eclipse Mill Gallery got off to a fast start opening the Eclipse Mill Annual Exhibition the prior weekend. Some 27 artists are participating in the lively and diverse group show. There were labels next to works indicating studios open to visitors. So the gallery provided a guide and preview of what to see in the building which is home to 40 live/ work lofts. Link to Eclipse Mill Annual Exhibition review.. There was a nice article in the Berkshire Eagle by Keith Shaw which highlighted a selection of  Eclipse artists. The North Adams Transcript offered generous coverage by Jennifer Huberdeau. She is also an artist who exhibited her work during Open Studios.

The weekend long event was launched with a reception at Mass MoCA on Friday night. There was a great spread of food donated by local restaurants including: Taylor's, Café Latino, Red Sauce, and Lickety Split. After making the rounds on Saturday we had dinner at Red Sauce, to show our appreciation, and enjoy the chef's superb Osso Buco.

Among the dignitaries greeting the artists were Mayor John Barrett III and Mary Grant, the president of Massachusetts College for the Liberal Arts (MCLA). She asked for a show of hands of how many in the audience were students or faculty at MCLA. More than half the audience responded. Clearly MCLA, in partnership with Mass MoCA, and the many artists, has played an invaluable role in creating a vibrant and expanding arts community. Jessica Conzo, an MCLA faculty member, co chaired the event with web designer and gallerist, Jason Morin. The presence of the MCLA Gallery 51 has been instrumental in bringing traffic and energy to the moribund downtown. Particularly this past summer with its Downstreet project which will shut down at the end of the month. Link to Downstreet coverage

We chatted with Jarvis Rockwell, who has one of the Downstreet spaces displaying a Mayan pyramid with many of his toy action figures. He commented that he has thousands of these collectables, many in storage at Mass MoCA where they were shown previously. He plans to "pay for the heat" and keep his project open through December. Jarvis has enjoyed meeting the many visitors to his installation.

Until it closed some months ago we enjoyed buying fresh mushrooms at the Delftree complex. But this was our first opportunity to explore its vast and interesting space. It is slated for renovation as mixed use commercial and residential space. Of course, any such development is now stalled by the sluggish real estate market. But this occasion revealed the enormous potential of the space.

We talked with the artist Andrew Davis. He moved here from Los Angeles a while back. This season he was the MVP among local arts activists. In addition to creating his own expressionist portraits he has been a vital member of the Coop putting in enormous time and energy. It seems that he had pretty much, all by himself, created the partitions for the many artists showing work in the Delftree complex. He described how Greenberg Hardware dropped off a stack of donated masonite and lumber. After three days, round the clock, Andy could barely lift his arm because of all of the drilling. He planned to just sleep this week.

The spaces in the Deltree complex will be spectacular when they are eventually developed.  Particularly, a cathedral scaled area displaying a series of enormous translucent panels by the French artist Jean Noel Chazelle. He pours pigments in an abstract expressionist manner on large sheets of plexiglass. These were suspended from the ceiling and caught the bright natural light of the afternoon. The artist created the work on location and is in the process of negotiating several exhibitions in Los Angeles, Dubai and New York as well as his native Paris. It is big and ambitious work and we were delighted to have this opportunity to view it. Link to Jean Noel Chazelle

While much of the work on display was uneven in the course of making the rounds there were many wonderful experiences. Overall, the quality of work being created in North Adams  is superb. It is just challenging to present it in the Northern Berkshires far from the mainstream of the art world. A long standing hope and dream has been that there would be more synergy between Mass MoCA,  which draws a committed and sophisticated audience for contemporary art, and a growing community of first class artists. There are a lot of elements that have to come together to make that happen.  These are tough times and we have to pull together. For those out there who are getting the job done, thanks. When the going gets tough the tough get going.